Jake Havoc: Os Mutantes, a comic and the backstory 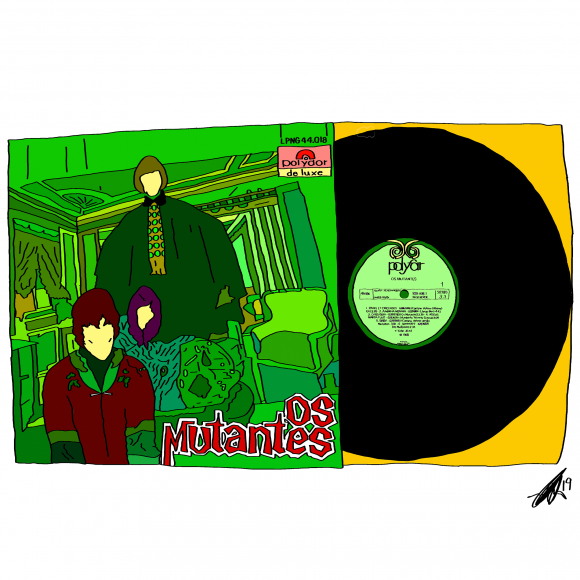 Many musical groups of the late 1960s and early 70s displayed exceptional bravery in various ways. John Lennon and Yoko Ono displayed bravery as they openly loved each other, opening themselves up to scrutiny, racism and hatred for being an interracial couple. James Brown and Nina Simone spoke up against the hatred people of color faced. Trailblazing pioneers such as The Village People, Sylvester and Elton John, among others, brought LGBTQ+ culture to the masses at a time when someone could go to prison for simply being queer.

There is one story from this era that is seldom told in the U.S. That is the tale of ​Tropicalia​, a Brazilian countercultural movement of the late 1960s that transcended genre to protest the brutality of Brazil’s military regime. The idea of Tropicalia was to craft a cultural collage that told a story and protested both conservatism and nationalism. Carmen Miranda, a famous film star of the 1930s who performed largely in the U.S., was deeply despised in her native Brazil but became a mascot for Tropicalia’s defiant attitude.

Artists such as Gal Costa, Gilberto Gil, Caetano Veloso, Jorge Ben Jor and the eccentric Tom Zè were some of the most prominent figures of this movement. A 1968 record called ​Tropicalia​ acted as a manifesto of sorts.

However, one group from this period has captured my imagination. Os Mutantes, meaning ‘the mutants’, was a trio of musicians from this time who, perhaps more than any other group, captured the aesthetic absurdity, deviance and willingness to experiment that was the essence of the movement.

They got their start, much like the Monkees, on a television variety show. However, unlike the Monkees, they not only were proactively pioneering advanced musical experiments, but they began using their platform to broadcast it to an unprepared nation. (In fairness, the Monkees made a fantastically absurd film called Head with Jack Nicholson which gets a gold star of approval in my book.)

Brazil was not prepared for Os Mutantes. There are many famous stories of how poorly Mutantes was received by a conservative nation under the iron grip of a military dictatorship. Even if the lyrical content of the group’s music did not explicitly criticize the military dictatorship, every other aspect of the group’s presence did. They performed covers of various American countercultural icons on their records and played in a style that was clearly influenced by American artists at a time when American influence was deeply resented in South America. The group openly spoke out about the right-wing politics of the era and connected their struggles to those of other liberation movements worldwide, like the American Black Liberation Front. One listen to the record makes it clear why it was so deeply resented by cultural conservatives.

The backlash that the band faced was far more serious than the disapproval of a crowd of festival-goers. Like many members of the movement, they faced the prospect of imprisonment, torture and even death for their protest. Sergio Dias, Arnaldo Baptista and Rita Lee, all the members of Mutantes, were exiled to England by the military where they continued their output of innovative music. The music that they recorded in England, captured on ​Technicolor​ (later rereleased by John Lennon’s son Sean), is some of their best.

Nothing would stop Mutantes and other Tropicalia artists from creating innovative music. Many years of house arrest due to a drug charge would not stop Rita Lee from recording prog rock, disco and new wave that competes with anything recorded by American and English artists of the time. Even while struggling with mental health issues and substance abuse, Baptista recorded ​Loki?, a​ record that is widely regarded as one of the best Brazilian albums of the era.

No conversation about Os Mutantes is complete without the band’s first and self-titled record. It epitomizes the protest, anxiety, anger and uncertainty that plagued the group and its beloved nation. It withstands the trials of time. I consider it the greatest experimental rock and roll album of the era.

Many great artists from this time faced palpable risks as they put out experimental music. But the music of Os Mutantes and the Tropicalia movement put these artists at exceptional risk and underscores the bravery that these artists had to make this music.

If you enjoy the likes of Hendrix, the Turtles, Brian Wilson or Bob Dylan, I implore you to listen to ​Os Mutantes. There is no way to truly understand the iconic countercultural movement of this era without paying attention to the contributions made by the Tropicalia movement.

“Jake Havoc” is a comic strip written and illustrated by Jacob Newman. Through homage and parody, it attempts to poke fun at the sometimes absurd nature of our daily lives, while celebrating American culture and iconography. You can find Jacob Newman’s work on Instagram @jakehavoc.

Jacob Newman is a senior from Milwaukee, Wisconsin. You can contact him at jane3083@colorado.edu.

Jacob Newman is a senior from Milwaukee, Wisconsin studying Advertising. His art spans many different mediums from illustration to photography to film. He likes to pay homage to American culture through his work. When he is not making art, he is often watching movies, distance running, and spending time with his cat, Tofu.