The Ponderosa Mobile Home Community may seem out of place in affluent Boulder, but it’s a haven for its 190 residents – more racially diverse, more tight-knit and less expensive than the surrounding city.

Residents want to preserve their paradise and are cautiously optimistic about the city’s plans to reconstruct Ponderosa, gradually replacing the mobile homes with permanent affordable housing built by Habitat for Humanity.

Ponderosa is an aging park. Several lots sit empty and filled with trash, while others are newly renovated and sport white picket fences. Only one-fifth of the mobile homes were built after 1976, meaning the vast majority do not meet the federal construction and safety standards that were established that year.

In 2017, the City of Boulder bought the park for $4.2 million. A vote on Oct. 22 by Boulder City Council annexed the land, which had been within Boulder County but outside the city limits.

Ponderosa, which has 68 units, is planned to be redeveloped unit by unit, with current residents given the option of keeping their mobile homes or purchasing a Habitat for Humanity home. No new residents will be permitted, and all lots will be developed into Habitat homes following the death of current residents.

“Many households are grateful for the effort and the opportunity for improved living conditions,” said Crystal Launder, a housing planner for the city. “Some distrust that the city will allow residents to remain in their homes.”

After annexation, the city will be responsible for replacing the park’s current infrastructure, paving the streets and putting in new sewer and water systems. Launder said the city plans to break ground to replace infrastructure in June. Construction of homes on vacant sections of the property is set to begin in the fall.

The city is offering to buy out mobile homes from residents, allowing those who choose to buy a Habitat home to use the equity from their mobile home as a down payment, a financial opportunity Richard Watkins is grateful for.

To Watkins, the affordability of Ponderosa is one of its most important traits.

“It’s the only place you can be in Boulder at this price,” he said.

One realtor’s website puts Boulder’s median home value at $752,000 with other real estate agencies estimating the average price of a detached, single-family Boulder house to be over $1.2 million. By comparison, the median home value in the U.S. is $231,000.

The city intends for the Habitat homes to cost from $111,000 to $190,000, with payments for low-income families not exceeding $800 per month to maintain affordability, as reported by the Colorado Independent. It’s a significant increase to Ponderosa’s current $540 lot rent, as most residents already own their mobile homes. But that increase is worth it for Watkins.

“We’ve been just renting the lot all these years, so having the city do it and turn into actual houses means we actually own something,” Watkins said.

Watkins said he has already seen improvements in the park under Boulder’s ownership. After last week’s snowstorm, the dirt roads of the park were plowed for the first time in years. Watkins is confident about the future of the park and excited to take the city up on its offer to develop his plot into a Habitat home.

“My trailer is from 1953, and it has no value and they’re giving me quite a lot of value for it,” Watkins said.

This is the case for many Ponderosa residents. Half of the mobile homes in Ponderosa are 50 years old or more, according to a survey conducted by the city in August.

Watkins has lived in Ponderosa since 1974 and has become sentimentally attached to the community. He has multiple sclerosis and called Ponderosa, “the last place I’ll be independent.”

To him, Ponderosa’s diversity and sense of community sets it apart from the rest of Boulder. His neighbors range from his former Boulder High School classmates from 1972 to immigrants from Germany, Mexico and Africa.

Reyna Espinoza has lived in Ponderosa with her family of six for five years. Espinoza is a recent graduate of Boulder High School and, like many Ponderosa residents, is of Mexican descent.

According to a city survey, 46.2% of Ponderosa residents identify as Hispanic. Only 9.26% of Boulder’s population is Hispanic or Latino.

“It’s great living here since there are a lot of Mexican and white people living here and we all get together,” Espinoza said.

This kind of tight-knit community is what drew Espinoza’s family to Ponderosa in the first place. They had previously lived in an apartment complex but found a sense of peace and tranquility within Ponderosa that the apartments lacked.

“I feel like the community is more connected,” Espinoza said. “Our neighbors really like to be together. It’s a really peaceful neighborhood … and you can pretty much live your life here without anyone being all involved in it.”

Fernando Perez agrees with Ponderosa’s interconnectedness. Perez and his family have lived in Ponderosa for 10 years, having come to Ponderosa seeking a strong sense of community.

Both Espinoza and Perez said that their families have yet to decide if they will keep their mobile homes or opt for a Habitat for Humanity house. However, both families are generally unconcerned about the impending changes.

“I feel like it’s a good idea as long as they don’t change the way we’re living,” Espinoza said

Bernard, who preferred not to use his last name for privacy reasons, is originally from Germany and has lived in Ponderosa for 22 years.

“I have lived a very wild life, and Ponderosa never punished me for that,” Bernard said.

Bernard said he feels such a part of the community that he wore a sign on his chest reading, “I am Ponderosa” at the last Boulder City Council meeting discussing Boulder’s purchase of the park.

“It is not a community like those apartment complexes across the street where one neighbor doesn’t have a clue who the next-door neighbor is,” Bernard said. “This place is of great importance for how we move into a future as mankind.”

Some residents are concerned that Ponderosa may begin to feel like an apartment complex as 66% of the Habitat units are going to be duplexes and another 15% are going to be triplexes and fourplexes. Only 19% will be single-family homes or stand-alone carriage homes.

Still, Bernard is hopeful about the community’s future.

“The city has never really let us down,” Bernard said. “It was basically a good-naturedness of the city to let us survive.”

Bernard said that he knows of multiple residents moving away out of fear of the city’s plans for Ponderosa.

He said others are being permanently pushed to other plots in the community because their mobile homes are in spaces where “tension pumps” must be installed to prevent street flooding. In 2013, Ponderosa suffered from a catastrophic flood, causing significant damage that eventually lead to the city becoming involved in the community to help replace infrastructure. Bernard said he’s currently renovating a mobile home for one of those displaced residents to move into.

“Ponderosa has absolutely blossoming future potential,” Bernard said. “But we have a few people who suffer.” 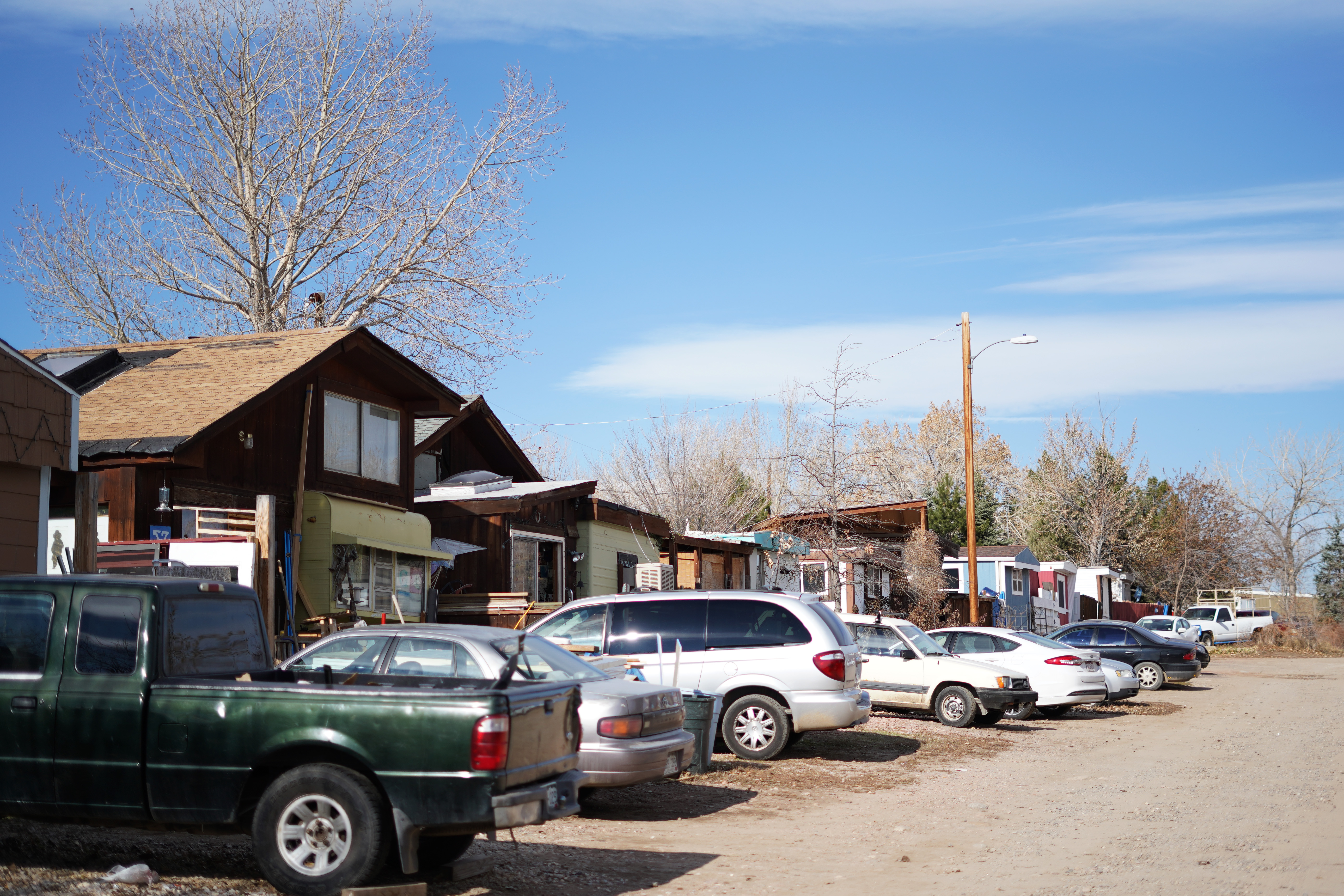 A line of cars parked on a dirt road outside of Ponderosa mobile homes on Nov. 22, 2019. As part of Boulder’s redevelopment of Ponderosa, the city will be responsible for replacing and paving the streets. (Hannah Metzger/CU Independent) 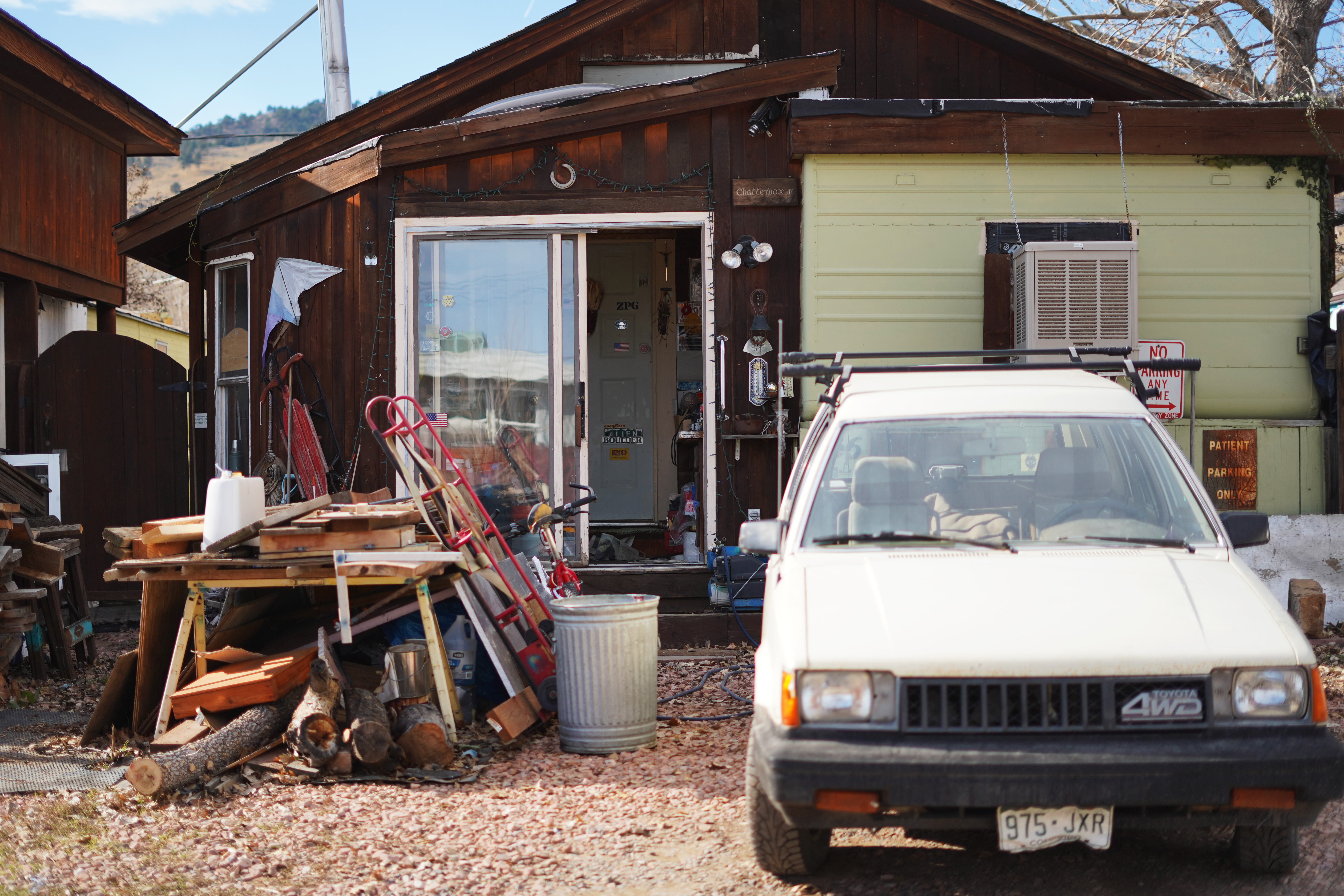 A Ponderosa mobile home sits empty with its front door open on Nov. 22, 2019. The interconnectedness of the community makes many residents feel safe and comfortable with each other. Ponderosa resident Bernard said the community has taught him the value of “being a friend to everybody.” (Hannah Metzger/CU Independent) 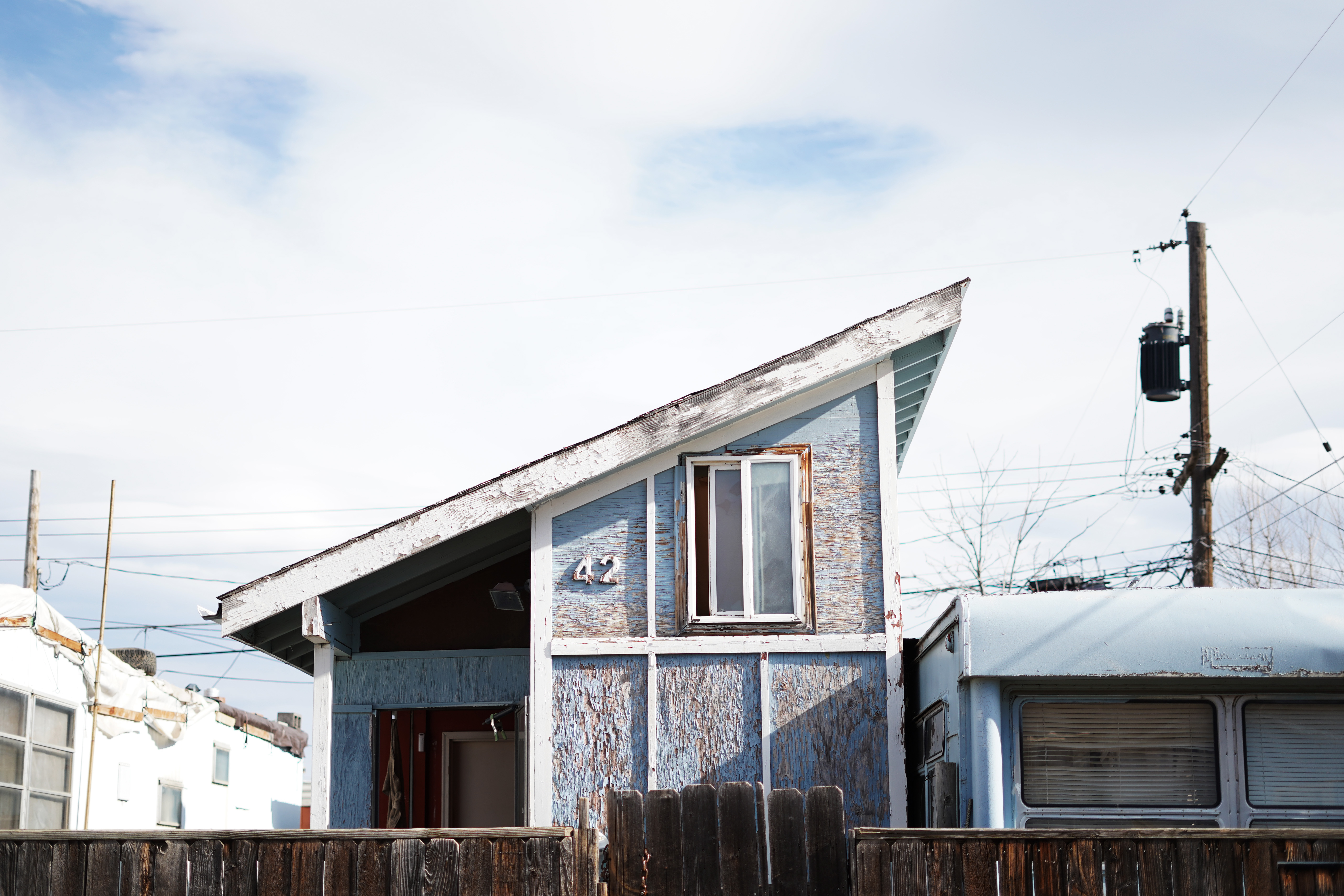 A Ponderosa mobile home on Nov. 22, 2019. According to the city, many mobile homes in Ponderosa have unpermitted additions of which the quality varies from home to home, making some of the residences unsafe. (Hannah Metzger/CU Independent) 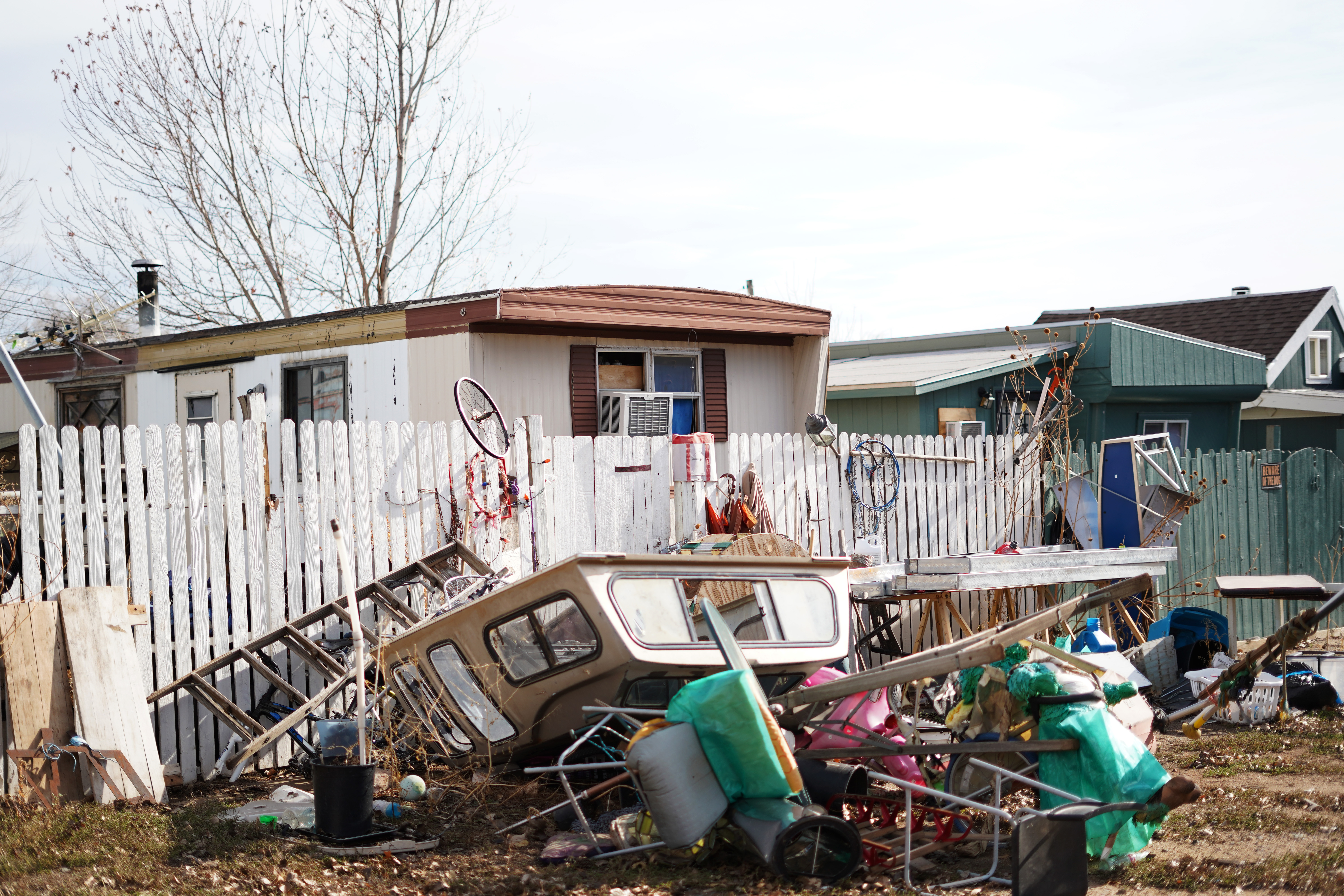 A pile of discarded furniture, car parts and various other items sits in front of a Ponderosa mobile home on Nov. 22, 2019. (Hannah Metzger/CU Independent) 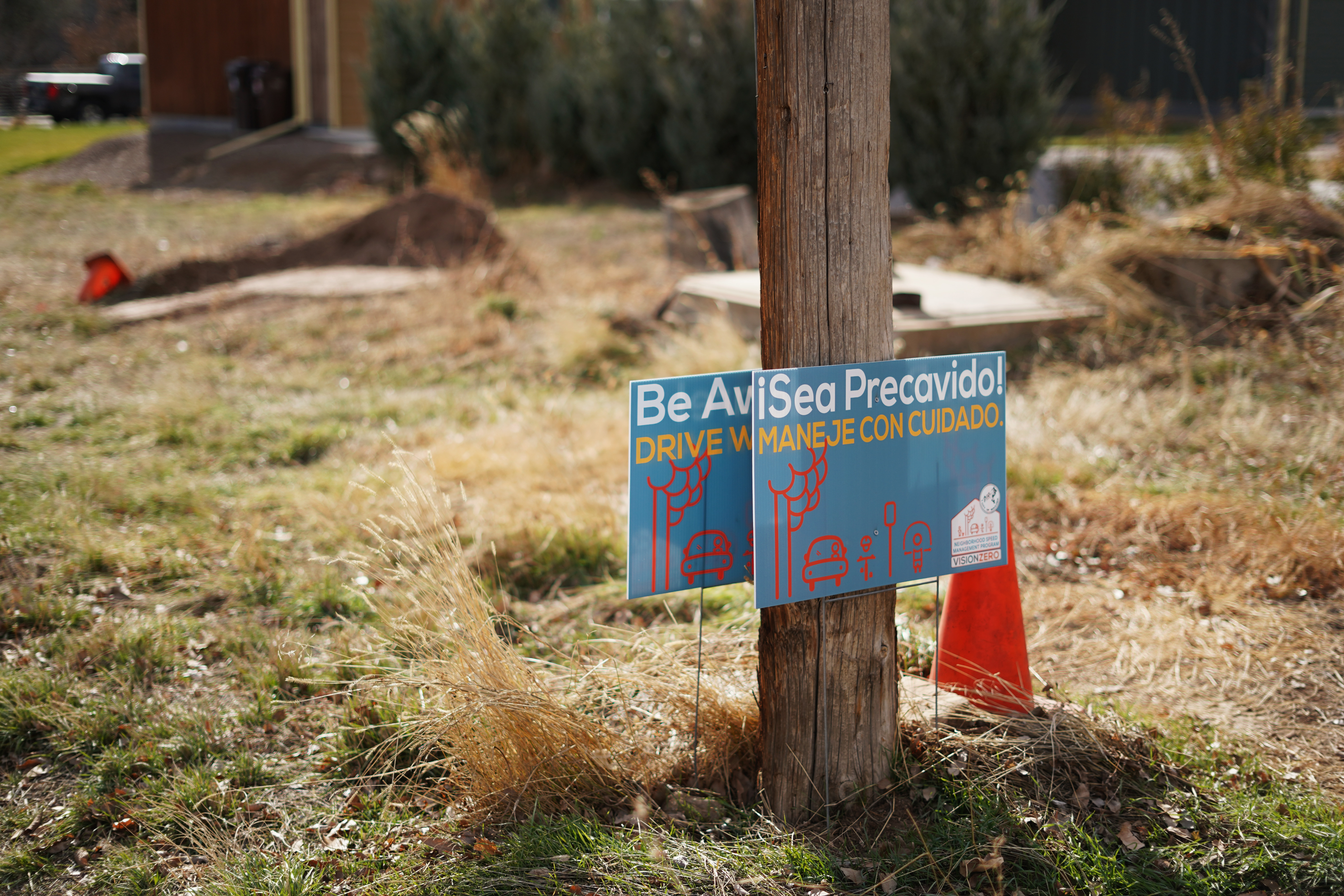 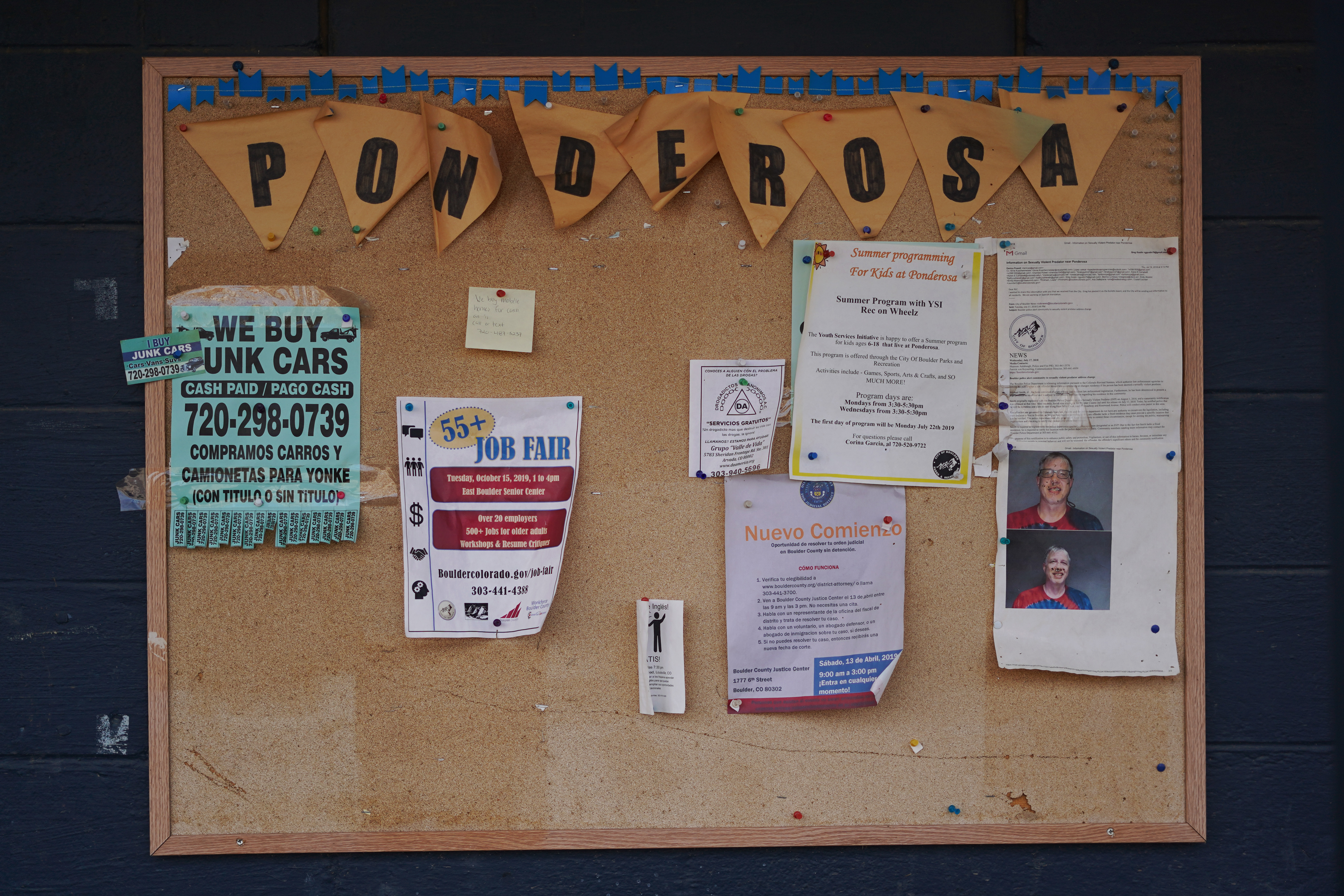 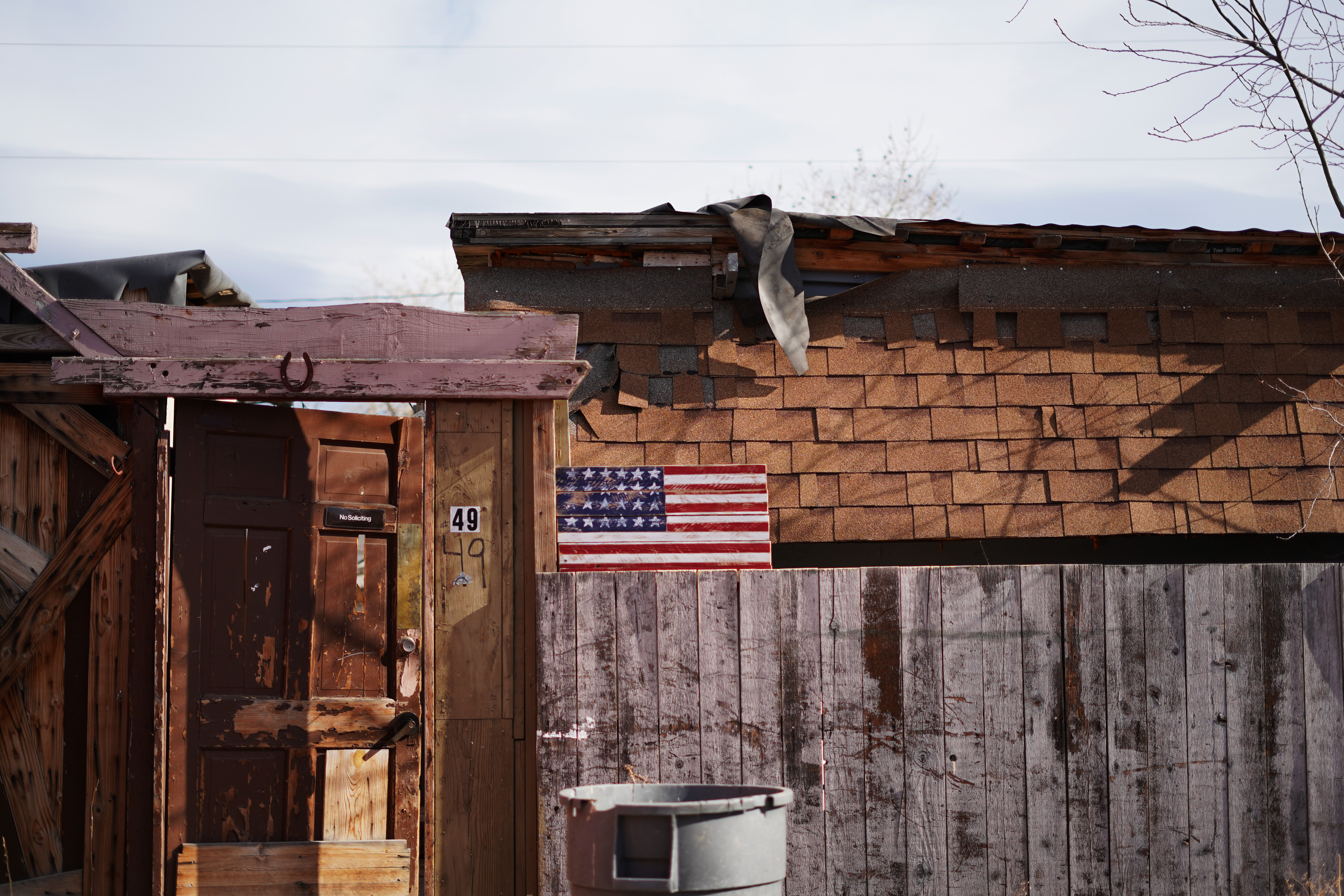 Broken roof panels hanging off of a mobile home in Ponderosa on Nov. 22, 2019. Half of the mobile homes in Ponderosa are 50 years old or more. (Hannah Metzger/CU Independent) 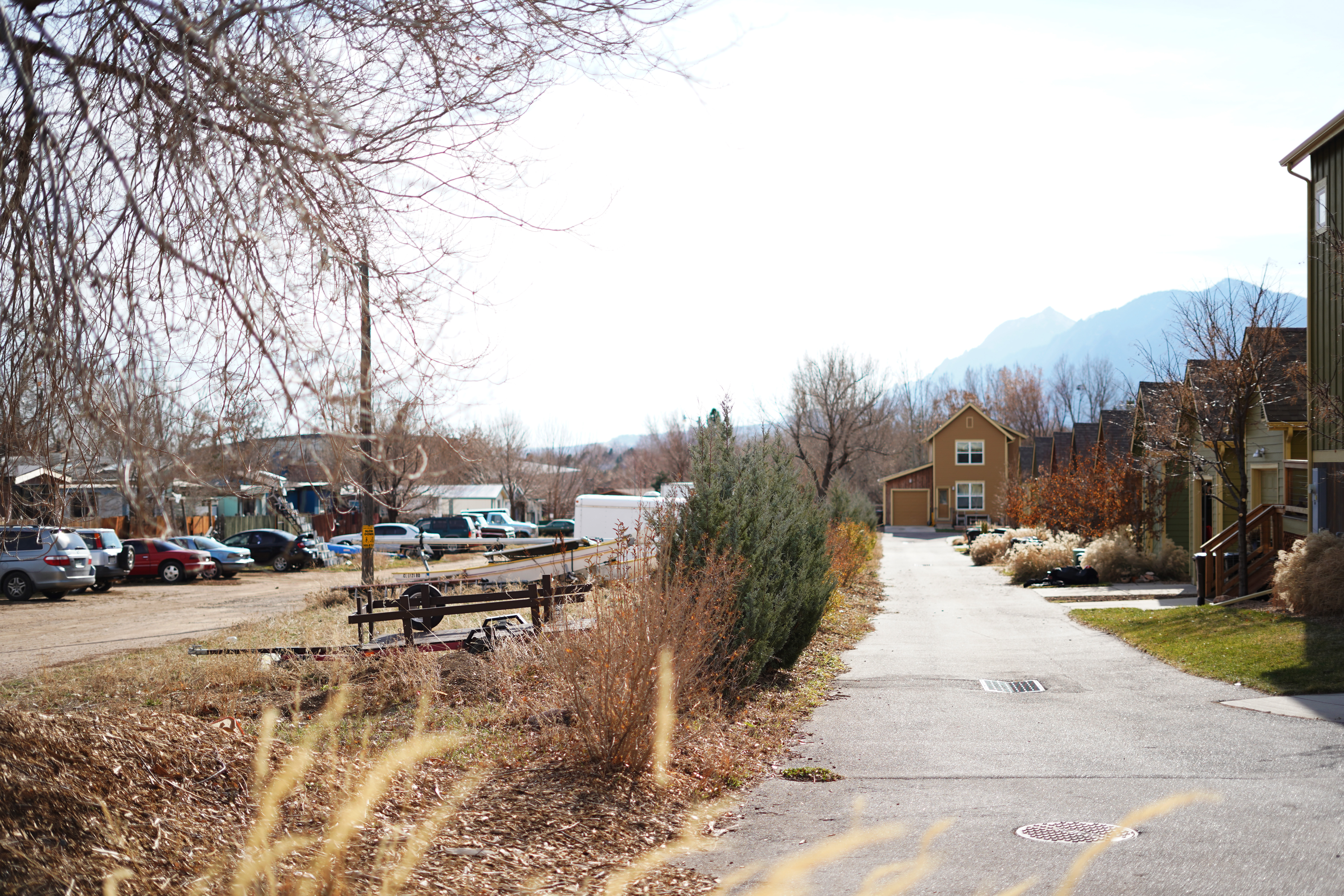 Ponderosa (left) and a newly developed neighborhood separated only by a dirt road on Nov. 22, 2019. After the redevelopment of Ponderosa by Boulder and Habitat for Humanity, the community will blend in seamlessly with the surrounding neighborhoods. (Hannah Metzger/CU Independent) 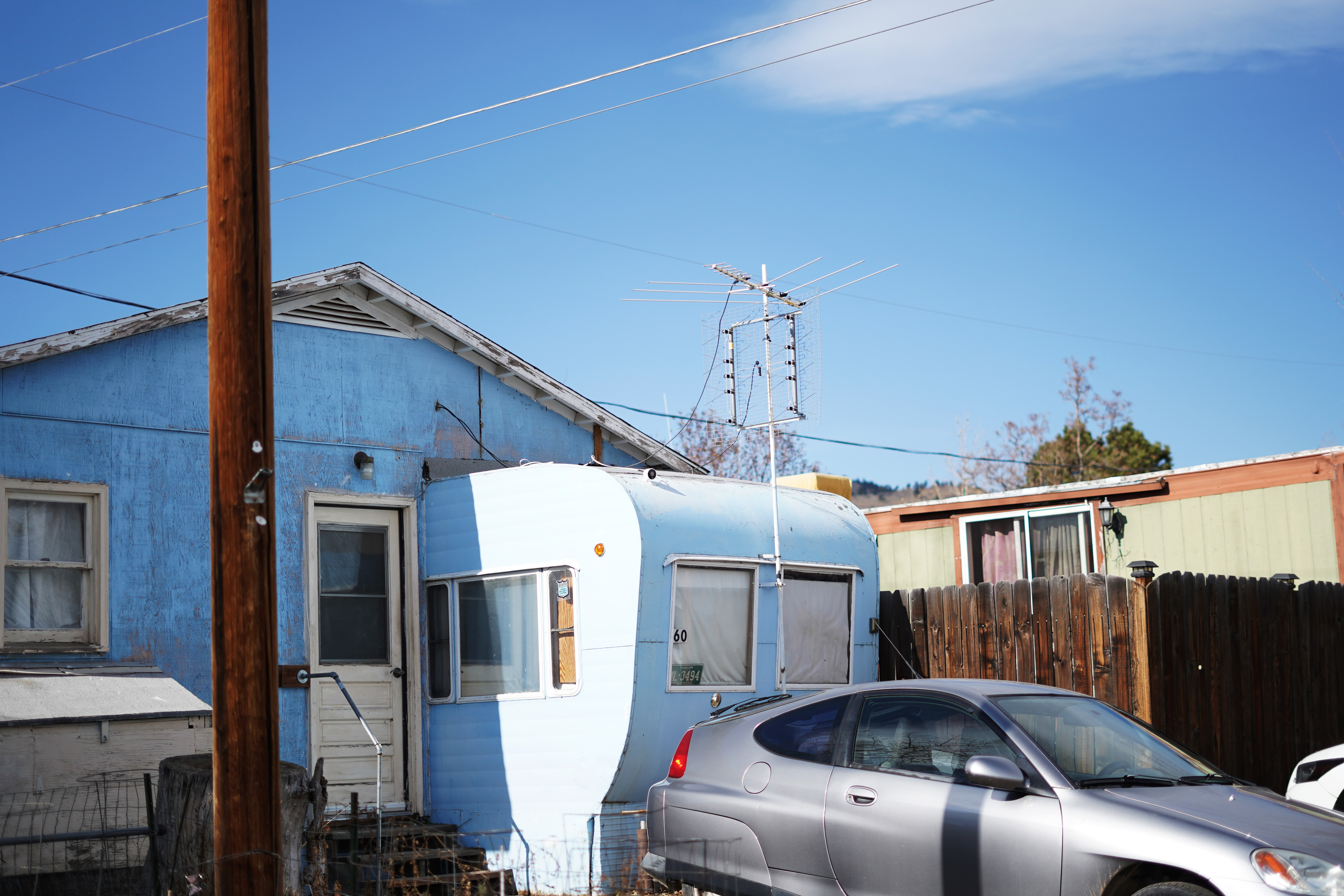 A mobile home in Ponderosa on Nov. 22, 2019. Only 14 of the mobile homes in Ponderosa were built in or before 1976; therefore, the vast majority of Ponderosa mobile homes do not adhere to the federal construction and safety standards established in June 1976. (Hannah Metzger/CU Independent) 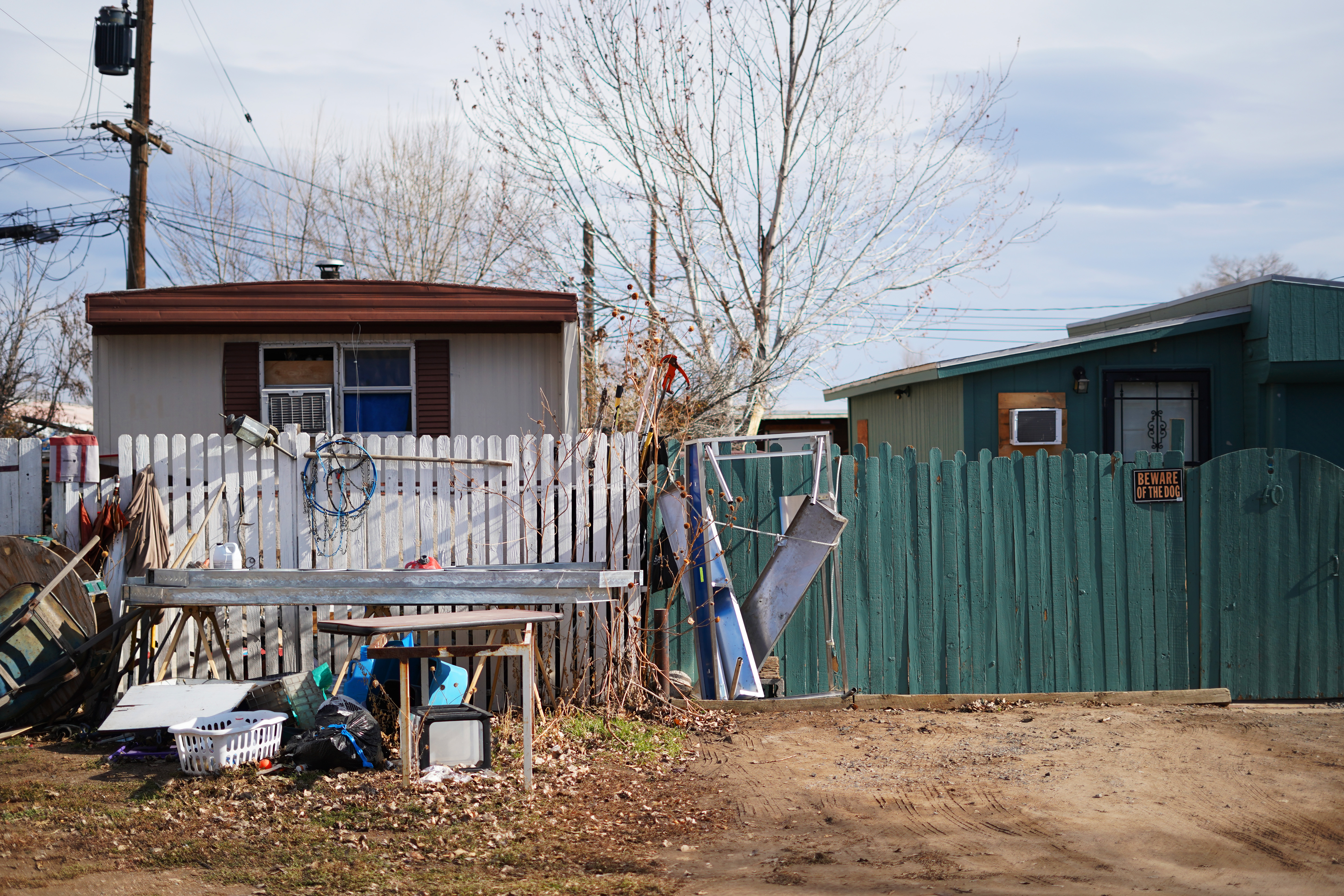 Two neighboring mobile homes in Ponderosa on Nov. 22, 2019. The condition of mobile homes in the community vary drastically with the oldest home being built in 1953 and the newest in 2001. (Hannah Metzger/CU Independent) 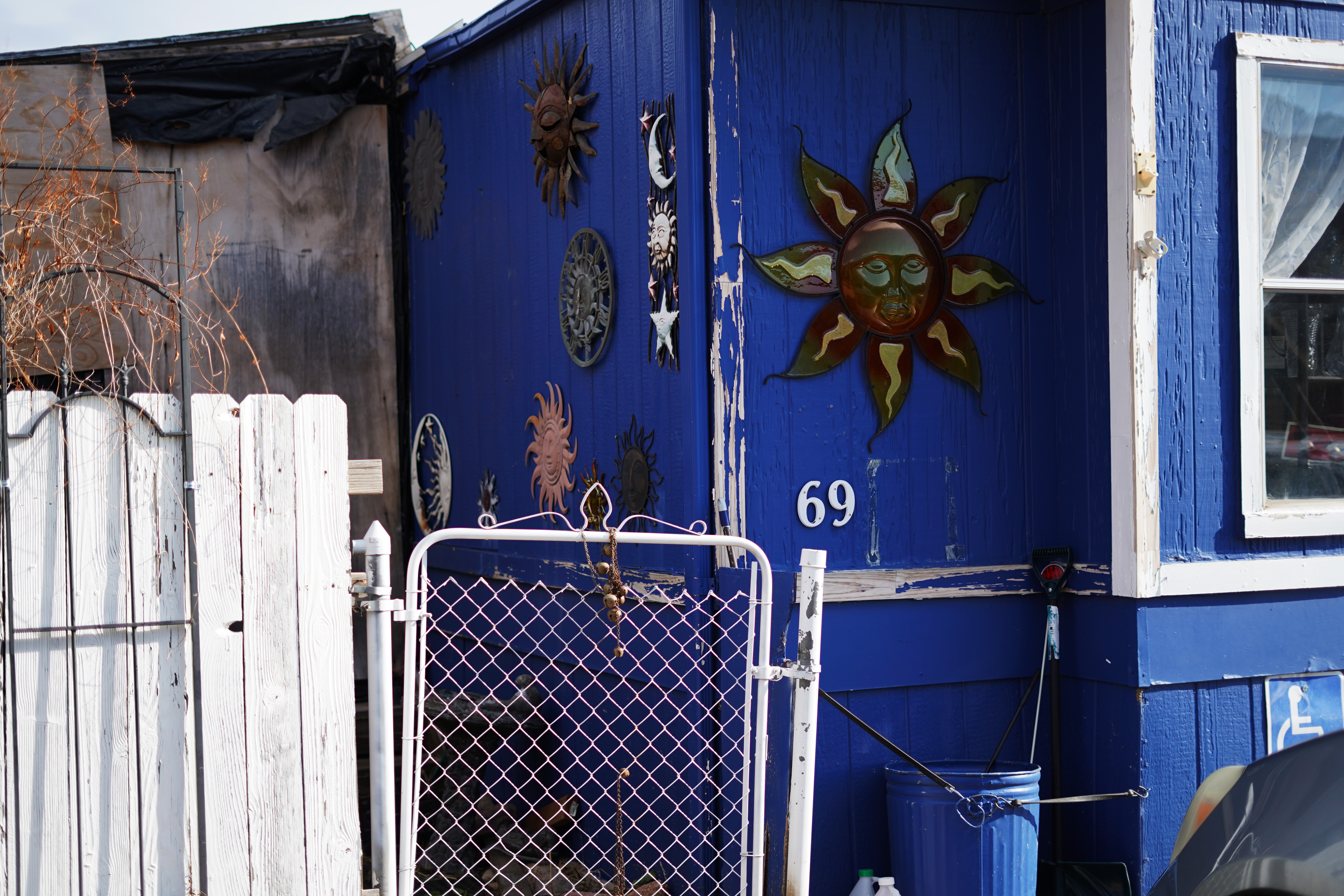 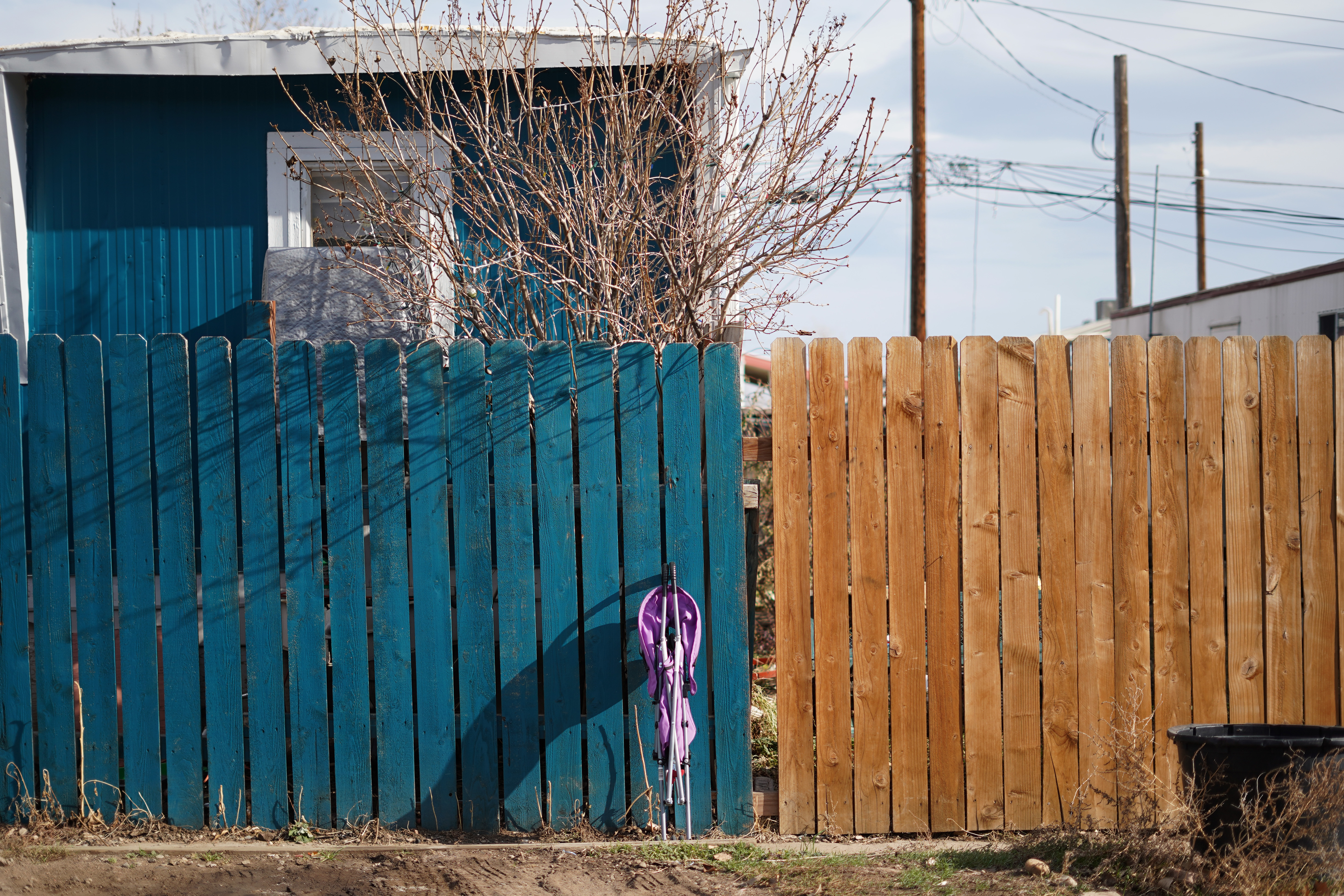 A stroller leans against a mobile home’s fence in Ponderosa on Nov. 22, 2019. 69 of Ponderosa’s 180 residents are between the ages of 0 and 21, according to a city survey. (Hannah Metzger/CU Independent) 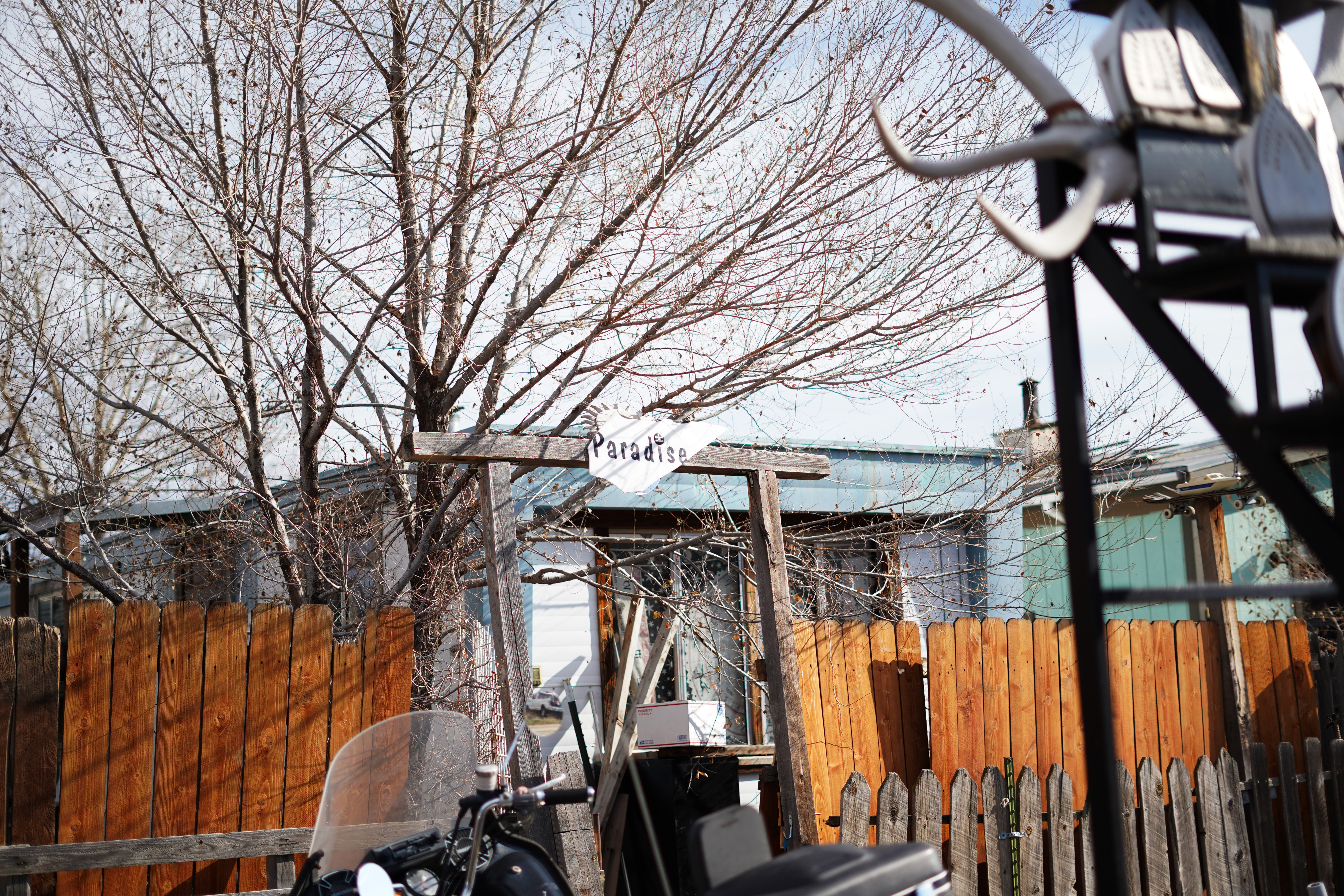 A sign reading “paradise” hangs in front of a mobile home in Ponderosa on Nov. 22, 2019. The diversity, affordability and community in Ponderosa make it unique to the rest of Boulder, bringing many of its residents to view Ponderosa as a haven within the city. (Hannah Metzger/CU Independent) 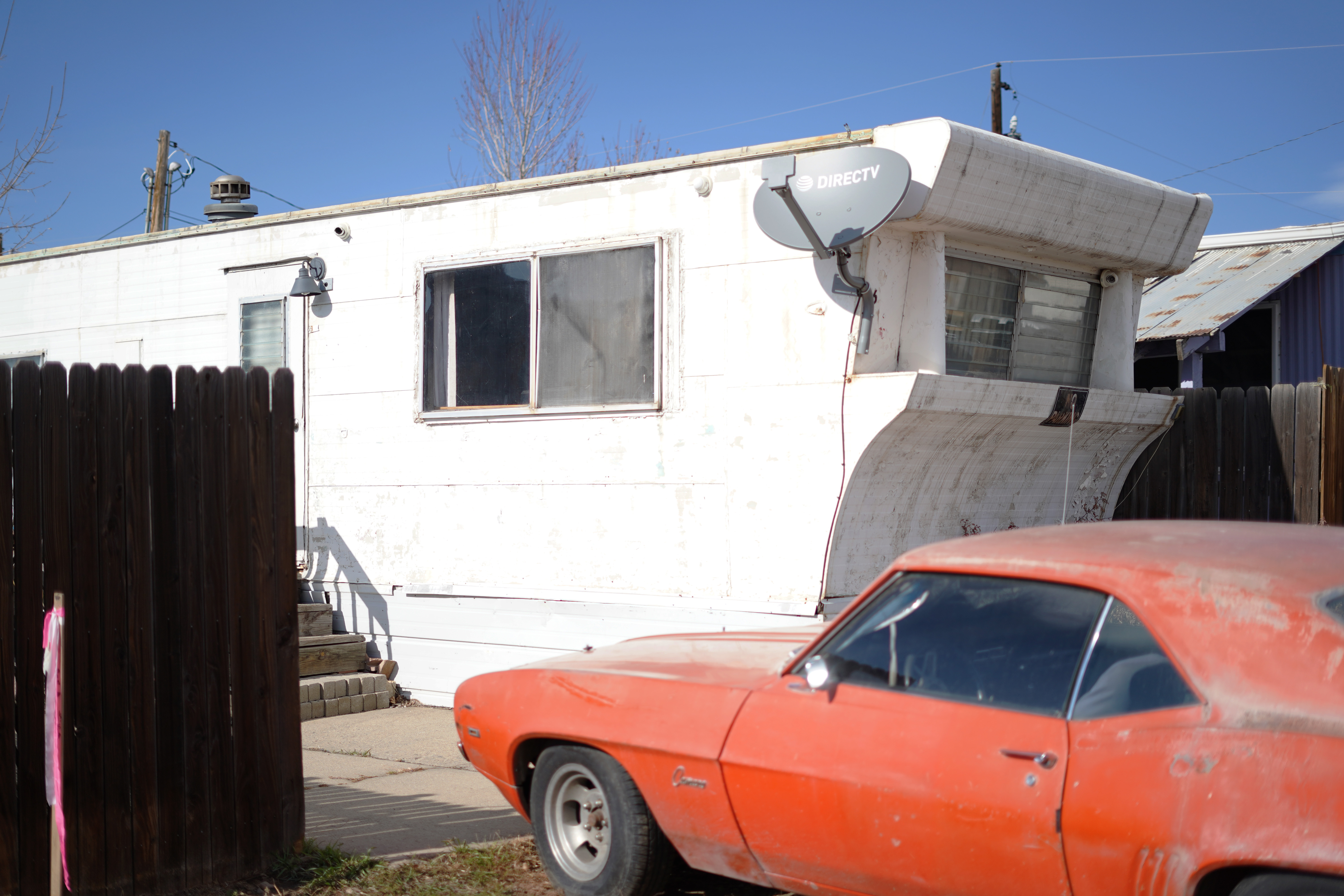