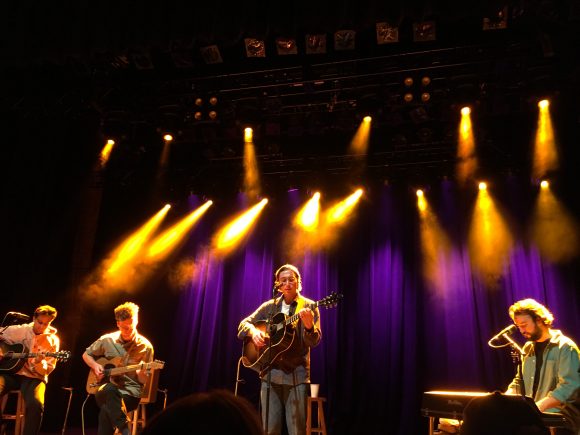 Folk/Indie-rock band Whitney took the stage Wednesday night at the Boulder Theater for a free show. Known among fans for creating songs of euphoria and happy memories, Whitney’s tracks are summer anthems and ultimately feel-good music, though they explored mature themes during Wednesday’s concert.

Following critical attention after their 2016 debut album Light Upon the Lake, the Chicago group skyrocketed into the lives of their fans. That same year, the album earned “Best New Music” accolade from Pitchfork. The album broke barriers of what independent music could do and set a precedent for how indie-folk can subtly work its way into the mainstream. That being said, Whitney has stayed true to their independent and underground roots and still make appearances in the catalogs of underground listeners.

On Wednesday, Whitney did something a little different. When fans failed to see a drum kit, confusion ran through the audience until drummer and frontman Julien Ehrlich arrived on stage having traded his sticks for an acoustic guitar. Horns, a staple of the group’s musical rhythm, were substituted with keyboard leads on a Wurlitzer. Yet the changes only served as a testament to Whitney’s talent as they harmonized together nicely and performed songs in a more raw and barebones way.

And the lack of horns didn’t stop audience members from dancing, especially to “Polly” and fan-favorite song “No Woman.”

“I danced and swayed and felt really involved and in tune with their music,” said CU grad and first-time listener, Sabrina Linton.  Linton is looking forward to the group’s upcoming follow-up album Forever Turned Around.

Whitney’s debut album gained popularity due to its ease of digestion; the album conjures feelings of happiness and loss, loneliness and happier times. Broken down, it’s music that listeners can empathize with, an album that brings people back to a certain point in their life when things couldn’t get much better.

However, there is a darker side to the seemingly upbeat rhythm that lead guitarist, Max Kakacek, strings together ever so flawlessly. Wednesday saw the group sprinkle new songs throughout their setlist with tracks dealing with the fear of falling behind. These undertones were masked with upbeat chord progressions and singable choruses creating ties reminiscent to Neil Young’s live acoustic sets.

“I danced and swayed and felt really involved and in tune with their music.”

Through the lyrics of title tracks “Light Upon the Lake,” drummer Erhlich questions “will life get ahead of me?” But despite how dark the tracks may seem, there is always an upside and a way out. Erhlich sings on the track “The Falls,” “I hope I’m climbing when I’m down”.

Whitney asks: what happens when the euphoria of being young runs out and the comedown sets in? The group may look to explore these themes further in their upcoming album.

Despite a turn towards more serious themes, audiences were in high spirits. Whitney harmonized incredibly well together and put on an entertaining show.

Whitney’s follow up album Forever Turned Around will be released on streaming services and physical platforms Friday. The group will be back in Colorado on October 21 with a full band, headlining a show at Denver’s Ogden Theater. Tickets and information can be found here.

Zack is currently entering his fourth year at CU with a Major in Journalism. He is the Head Arts Editor at CUI. He splits his time between going to concerts and backpacking. He likes to focus his time reporting on independent music. You can follow him on Instagram @zacosphotos