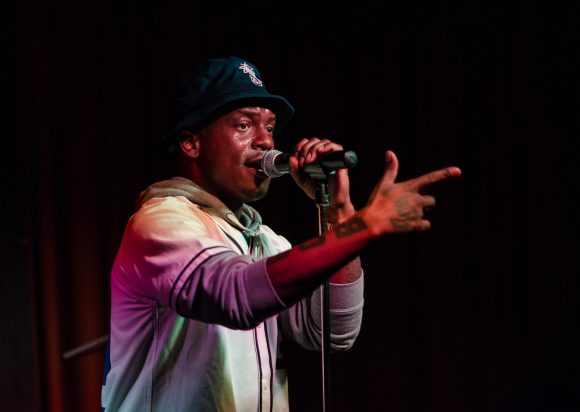 EARTHGANG is made up of rappers Olu and WowGr8, better known as Johnny Venus and Doctur Dot. In 2017, the duo signed to rapper J. Cole’s label Dreamville Records. Since then, EARTHGANG has produced two albums under Dreamville Records. Their newest album, Mirrorland, provides testament to their sound.

Bouncy beats provide a canvas for the duo’s quickfire verses and one-liners. High-pitched screeches and alien-like sounds echo through the tracks. The lyrics that Venus and Dot spit pair well with the abstract musical landscape laid before them — touching on the struggles of growing up in Atlanta surrounded by drugs and death to living a life of luxury. The duo delves into this transformation throughout the album.

The lyrics are full of layers of meaning, crossing music and movie references. In the song “Stuck,” Dot spits, “I guess I’m finna go without ya like ‘Forgetting Sarah Marshall,’ Marshall and Kim in here for a minute.” A few lines later, Dot completes the circle of the verse with, “My love for you is infinite.” This set of lyrical tethers provides a possible double entendre by referencing the movie “Forgetting Sarah Marshall” and the show “How I Met Your Mother,” which has a character named Marshall. However, the line “Marshall and Kim” also refers to famous rapper Marshall Mathers (better known as Eminem) and his former wife, Kim. To further solidify the Eminem reference, the line “my love for you is infinite” alludes to one of Eminem’s earlier albums, Infinite.

Mirrorland delves into other realms of collaboration with features from well-accredited rappers such as Young Thug, T-Pain, Kehlani, Arin Ray and Malik. Through the utilization of high-caliber artists, EARTHGANG elevates their production to a new level. Whether it is through the floaty vocal harmonies from Kehlani or the iconic soulful autotune of T-Pain, the group utilizes resources to their advantage.

Mirrorland has allowed EARTHGANG to go against the norms of the rap industry around them, all while staying within the scope of their label. Through experimentation of vocal pitches, musical approaches and the overall unique sounds they implement, EARTHGANG have crafted a cohesive album prompting much attention.

The upbeat duo is coming to the Fox Theatre in Boulder on Oct. 29 for their Welcome to Mirrorland Tour. Tickets are available now.