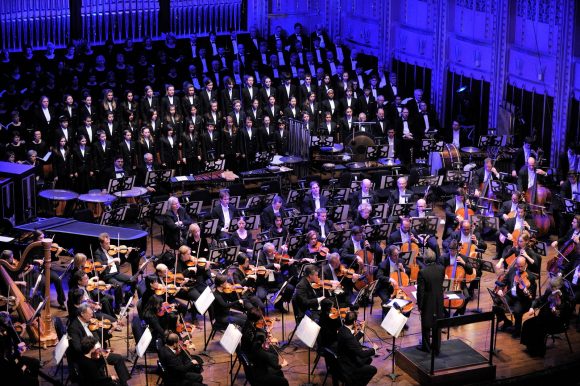 The Cleveland Orchestra (Photo via colorado.edu)

This week’s Faculty Tuesday, held in Grusin Music Hall, featured guest performers from the Cleveland Orchestra alongside University of Colorado Boulder faculty. Members of the Cleveland Orchestra, informally known as one of the “Big Five” American orchestras, are residence at the College of Music this week, teaching CU students in master classes and private lessons.

The night started off with Mendelssohn’s “Concertpiece No. 1 in F Minor, Op. 113.” The two clarinetists, Afendi Yusuf and Daniel Silver, and CU’s collaborative pianist, Margaret McDonald, truly shined. The music fell and rose in harmony and tranquility. The musicians wove their way through the song, the music dancing lightly and gracefully through the hall.

David Popper’s “Requiem, Op. 66” came next, featuring Mark Kosower, the Cleveland Orchestra’s principal cellist. CU faculty David Requiro and Meta Weiss joined Kosower on cello, while CU’s collaborative pianist Alexandra Nguyen stole the spotlight on the piano. The piece was played at the composer’s own funeral. The contrast of the yearning cellos and the tinkling piano truly highlighted the passion in the piece, and all musicians were met with loud applause.

Following that, McDonald and Shachar Israel, the orchestra’s assistant principal trombonist, made their piano-trombone duet truly memorable with the performance of Stjepan Šulek’s “Sonata Vox Gabrieli.”

“It’s a scenic piece, which brings mountains and other vistas to mind – but you needn’t imagine mountains here in Boulder,” Israel said. “You have your own.”

Finally, Cleveland Orchestra musicians took over the stage in their performance of “Septet in E-flat Major, Op. 20” by Ludwig van Beethoven. Stephen Rose on violin took the lead with the clarinet replying beautifully against a lovely background of other instruments. The two instruments took turns snatching the lead, playfully conversational while the other strings and winds indulged in their joy. The grandiose horn sang through passionately while the cello shone with youthful grace. Both melted back into the complement of sounds woven by the septet of instruments before ending song and concert with a grand flourish.

Faculty Tuesdays return on Oct. 1 with “Love and Death,” featuring solo piano music including pieces from Schumann to Leoš Janáček.

I am a writer - primarily interested in creative fiction, but willing and wanting to expand horizons to other scopes of writing. I am also a pianist, with 14 years' experience - during which I composed 4 songs, represented my country (Malaysia) in a concert with my first composition, joined several music competitions, as well as accompanied and led my highschool's choir group.