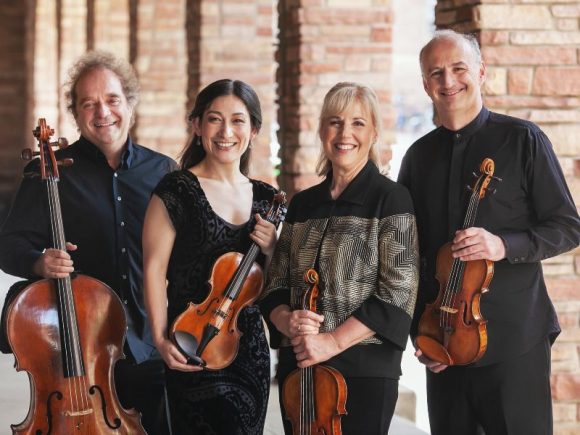 At precisely 7 p.m. on Monday night, the wood-paneled doors of Grusin Music Hall opened its doors to let in the loyal audience ready to see the Takács Quartet.

“I’ve been coming here to watch them play for the past 25 years,” one audience member said while the other members of her group nodded along.

The concert began with Mozart’s “String Quartet No. 19 in C Major,” first performed in 1785. It is the final piece in Mozart’s collection of string quartets dedicated to his friend and fellow composer, Joseph Haydn. The quartet is nicknamed “Dissonance” for its shifting and volatile nature that shocked audiences when it first debuted.

The first piece had four movements. The first movement “Adagio-Allegro” initiated fluid exchanges between the quartet members, who used their instruments as if they were conversing with one another. The second movement “Andante Cantabile in F Major” was more melodramatic and showcased the quartet’s synchronicity. During the third movement “Minuetto,” the quartet’s ability to fill the theater with only four instruments truly landed. The musicians were pliable to the whims and desires of this movement, following it’s capricious, changing nature. The final movement “Allegro Molto” was the most involved one and had the musicians wiping their brows when they finished. Once they did, they were met with raucous applause that continued for two bows.

Before beginning the second piece, Bartók’s “String Quartet No. 4,” first violinist Edward Dusinberre described it as “original in the way Bartók intended the sound in this piece.” String quartet performs differently from theater to theater, he added.

Bartók’s “String Quartet No. 4” is the musical equivalent of a Pollock painting: chaotic, brash and intense with a strong intention that requires strenuous focus to discover. The first movement “Allegro ma non troppo” involved each instrument going off at different times and joining together to form a cacophony of sounds. The second movement “Lento” emphasized the strangeness of the first by going from a soft piano to a shocking forte. Each member of the quartet plucked their instrument’s strings haphazardly, while András Fejér beat against his cello.

The third movement “Molto vivace” featured a cello solo that Dusinberre had described as the “turning point of the piece.” The cry of the cello was brought out from the chaos and allowed to reign while finally creating a sense of unity between each instrument. With this moment as the turning point, movement four “Finale: vivace ma non troppo” returned to the plucking of strings of movement two, but this time with a feeling of congruence. Movement five, meanwhile, had been described by Dusinberre as “a party: not a tea party, more like the Boston Tea Party.” His point was proven when they began. There is the discord found in the first movement, but with more logic behind it, allowing the audience to understand the intention. Overall, this marathon of a piece garnered a partial standing ovation and, once more, thunderous applause.

The final piece of the night was Dvořák’s “String Quartet No.12 in F Major, Op. 96,” which is nicknamed “America.” After the complexity of Bartók’s piece, Dvořák’s served as a balm.

More information on CU Presents and Takács Quartet can be found here.