Buffs’ offensive line has a lot to prove in 2019 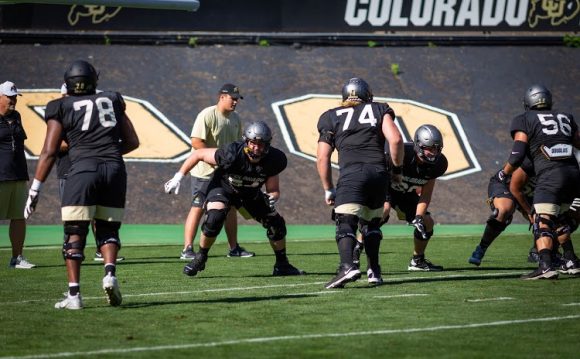 Protecting a fifth-year quarterback and a young running core yields quite the challenge for the 2019 University of Colorado football offensive line. But so far, new faces and a new coach are meshing together this fall with high hopes.

Offering a fresh perspective for the Buffs will be first-year offensive line coach Chris Kapilovic. After coaching seven seasons at the University of North Carolina, Kapilovic was a desirable addition to head coach Mel Tucker’s staff.

For a team still searching for its roles, Lynott has emerged as a leader of the offensive line. Positions are far from finalized, but Lynott expects to get significant time at center for the Buffaloes. The senior is taking advantage of his final camp in Boulder.

“I think we’re looking good (and) we’re getting better every day,” said Lynott, who played in all 12 games as a junior last season. “It’s kind of hard to tell especially just coming off one spring with the new coach and everything, but I feel like the offensive line is coming together as one.”

Uniting as a group will be key for the offensive line, and newcomer Arlington Hambright looks to fit right in with the squad. Coming from a program like Oklahoma State, there has been a lot of excitement around what Hambright can offer.

On the younger side, sophomore Will Sherman is molding into an exciting left tackle. The 6-foot-4, 310 pound Sherman played in every game last year and started his career as an All-Pac-12 honorable mention. The talent is there for Sherman, who still hopes to improve in 2019.

“Personally, I just want to work on my pass (protection), (and) get better in the run game, and get better stamina so that I can play until the fourth quarter on the last play,” Sherman said.

Rounding out the group is Frank Filip and Colby Pursell. Filip made a few appearances last year as a freshman and should use his newfound experience to make an impact at tackle. Pursell will see playing time at either guard or center, the sophomore had an excellent 2018 season, starting all 12 games at center for the Buffaloes.

The offensive line will be crucial for the Buffaloes to put points on the board. With experienced leaders and a strong young core, the group hopes to make a name for themselves as week one approaches.