Interview: The CUI sits down with Colorado AD Rick George 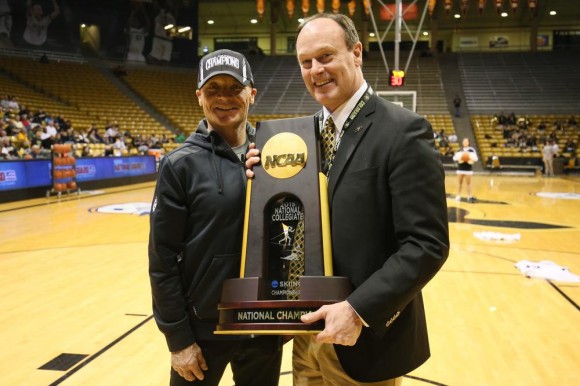 On the fifth floor of the Champions Center sits the office of Colorado Buffaloes Athletic Director Rick George. His pad offers a remarkable view of Folsom Field and the Flatirons towering high behind it. It’s a perfect space that matches the man who too towers high as the overseer of all university athletics. As the AD for CU, George has greatly aided not only the athletic department as a whole, but all of the university’s sports teams and has a direct hand in success of CU’s sports teams. During his six years in charge of university athletics, George has helped the department in many ways, including hiring coaches and staff members, spearheading a multi-million dollar athletic complex expansion, and strategic planning and fundraising to help the Buffaloes brand become what it is today.

George welcomed the CU Independent into his grand office space for a one-on-one sit-down interview, where we discussed his role as the Athletic Director, his accomplishments and the future of the athletic programs.

CU Independent: What brought you to CU?

Rick George: I had worked at CU when we won a national championship in 1990. I was a football recruiting coordinator, and my youngest daughter was born here, so when we were given the opportunity to come back we said ‘yes.’ We have a passion for CU and Boulder and it just made sense.

CUI: How was your experience last year, and what were your thoughts about Colorado sports and how the year ended?

RG: You know, we had a very good year. [Colorado] won a national championship in women’s cross country, our soccer team had an outstanding year, volleyball went to the NCAA Tournament again; and though football wasn’t as successful as we’d like obviously, we made a change and I’m excited about the future. Women’s basketball didn’t have the kind of year we’d hoped, but they had some injuries from Alexis Robinson and Kennedy Leonard. Our ski team finished third, lacrosse finished second in conference, our golf team had an ok year, and tennis had a really good year. I think, overall, I feel really good about where we are at athletically; and we are accomplishing even more in the classroom and around the community.

CUI: What are your goals for this upcoming year regarding athletics?

RG: You know, I think for us we want to continue to raise the bar on our performance and what we’re doing in the classroom. We’ve had nine and hopefully 10 consecutive years of a 2.9 [grade point average] for athletes, and those are the bars we want to grow and raise. From an athletic standpoint, I’d like to win another championship. I think we have the right people to do this, and new leadership. I have high expectations, and we want to continue to provide more resources for our athletes in the areas of mental health, strength and nutrition, and career development. These are important for the structure for our athletes.

RG: He fit all of the things I thought we needed in a coach. As I look back in our success when we won the national championship, I felt we needed a coach who could bring discipline and accountability, and he’s had great success in his career. I interviewed him three days before the SEC Championship, and I wanted somebody that had the background of success, that played the game, could bring discipline, accountability and toughness, and he checked all the boxes.

CUI: I know recruiting is a huge topic for you, as you had the No. 1 recruiting class in the nation your first year at Illinois. Can you speak on the level of recruiting that Mel Tucker has been able to bring to your program?

RG: Mel told me that he recruits every day and I believe it. We’ve got something significant to sell to student athletes — i.e., quality of community, academics, the conference we’re in — and I think we ought to go after the best players. If we want the success that he wants and I want, we have to recruit the best players, and we certainly have the facilities now and support from our campus. He recruits every day and the “Relentless” process he puts in everyday is going to pay off.

CUI: What was the biggest adjustment coming from the MLB (where George was the president of business operations for the Texas Rangers) to the NCAA?

RG: The difference is it was really that we had a couple of owners that were important to make sure you achieve what their objectives were. At a university, I report to the chancellor but there’s a lot more bureaucracy to get things done on a college campus. If I need to move forward on something I would go to a couple of owners, but here there’s a process.

CUI: Having spent over $100 million on our new facilities, it has made it possible to compete for championships for a long time coming. What has been the biggest hurdle in expanding the athletic department as rapidly as you have?

RG: Just the resources. We’ve spent a lot of time fundraising and getting donors to support our vision and where we’re headed. It was important to build this facility and it certainly cost, but the program needs of our student athletes were important, as well as the facilities, so the expansion of the expenses have gone up and that’s why resources have been a challenge.

CUI: Having worked in the Big 10, Big Eight, and Southeastern conferences, what makes the Pac-12 Conference stand out?

RG: For us, it really fits who we are for Colorado. There’s nine research institutions like ours in the conference, so having that collaboration from a university perspective is important. We have 30,000 living alumni on the west coast and being able to bring our programs to our alumni has allowed us to have record fundraising efforts. It’s been a real positive to us.

CUI: You were awarded twice by CU’s student athlete advisory committee as its choice staff member of the year, due to attendance at most home athletic events, regular meetings with team captains of all programs to interact with them and receive feedback, and willingness to meet with any student athlete. How do you think being so hands on and building personal relationships with our student athletes has benefitted the department and the teams?

RG: Look, I think all of that speaks to the culture that we’re trying to create. I think in any department or organization or team the culture has to be such that people can thrive in it. My support means that I care. I think it’s important everyone in our department understands that I do care about what we’re doing and I think that creates a culture that’s inclusive that everybody can feel a part of. I hate to use the term ‘family oriented’ but I think it’s like that in a lot of ways because we support each other — for example, “Buffs supporting Buffs” — and I think those things are important to building the right cultures. The time commitment that student athletes put is significant and being around people that have the same thing brings a strong culture. People want to work where they feel valued and cared about.