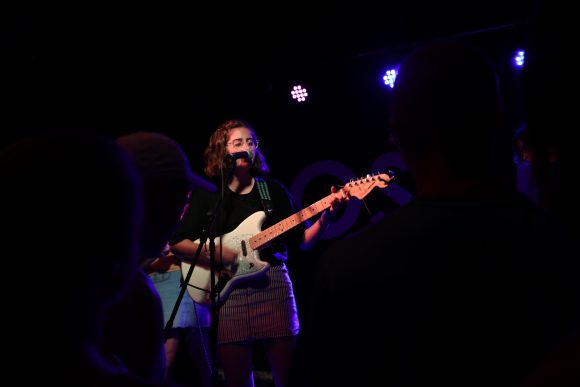 Lunar Vacation, the psychedelic group which labels itself as “pool rock”, took to the stage at Denver’s Lost Lake on July 25 for the second to last show of their first tour. Supporting the group was The Slaps whose surreal, occasionally straightforward approach to indie rock served as a well-placed compliment to Lunar Vacation’s dream-pop style. Despite their differences, Lunar Vacation has been quoted saying that The Slaps are in fact their favorite band.

Throughout the opening set, The Slaps changed their tempo constantly. They took their songs from laid-back beats to lightning-fast jams that kept the audience on their toes. With their obvious talent as musicians and an attitude of “do whatever you want as long as you do it yourself,” The Slaps have the potential to make even more great music. That’s not to say they haven’t done so already – their songs range from bluesy, melodic arrangements about waiting for Jesus (and Santa) to earnest guitar and voice ballads about lost love.

Lunar Vacation is made up of five members who all met in high school in Atlanta, Ga. and currently attend college in the city. They’ve been making music together since 2016, working their way up from local shows to opening for bands like Sales and Calpurnia. This summer the group is enjoying their greatest accomplishment yet with their first tour. Despite Denver being near the end, the five young musicians were fresh and excited to perform.

Early on in the set, guitarist Maggie Geeslin responded to a screaming fan, saying something to the effect of “Yeah we’re all in the same place!” Being in a small room with 150 like-minded people to see a band of best friends perform is inherently intimate. It feels like a unique shared experience – one that validates and reassures you things will work out and be okay.

The communal aspect of their shows does rely on their music. Jamming slowly into their second song “Swimming,” all five musicians rocked together in sync, building up dreamy layers of melody and prompting audience members to slow dance and sing to one another.

It’s immediately clear that the band has played together frequently; they were able to shift into high gear at a moment’s notice, transforming “Daytime” (a song about loneliness) into a driving and forceful piece of music. Lead vocalsit Grace Repasky’s lyrics are relatable but not generic, specific enough to empathize with yet not enough to betray the real people and situations they’re inspired by.

For their final song, Repasky and bassist John Michael switched instruments while the other members fiddled with their own, drifting in and out of sync with each other until the whole band suddenly started up into the song “Blue Honey.” As the song progressed, becoming faster and sharper, Michael burst into shining riffs with the audience jumping. After a long jam, the band returned to the song’s core melody, slowing down and ending their show with the crowd wanting more.

The group is currently working on a full-length album that they hope to release sometime in the next year. They have aspirations to make music together as a full-time job. It’s not risky to say that Lunar Vacation will probably be playing bigger venues and attracting more fans in the near future. Whatever comes next for the group, they’re sure to remember and cherish their roots, playing at small venues to eager crowds who are there solely for the love of music in this personal, endearing and irresistible form.