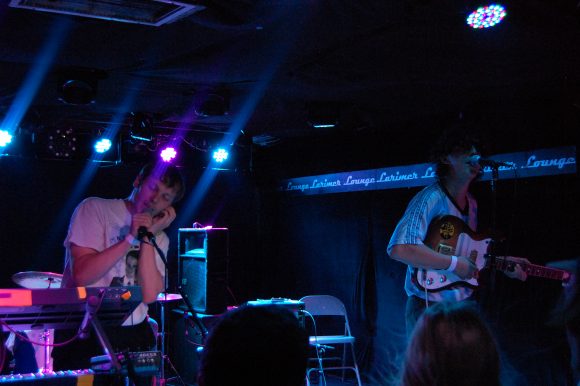 Synth-pop partiers Grapetooth brought their throwback sound to Denver’s Larimer Lounge on Saturday. The band’s raucous live shows are the stuff of legend in their native Chicago scene. Last weekend’s show just goes to show their ability to bring the same energy to a small, unfamiliar stage. Fueled by red wine and synthesizers, Grapetooth proved that they know how to have fun regardless of the venue.

Grapetooth is the side project of Twin Peaks guitarist, Clay Frankel and producer Chris Bailoni. The two have been playing music together in the privacy of their own home (they’re roommates) for years. It wasn’t until they opened for a friend and fellow Chicago Musician Knox Fortune and began playing shows around Chicago that Frankel and Bailoni decided to produce an entire LP, which came out last November. It features sounds that are quite literally recycled, as Bailoni often employs an old keyboard he found discarded in an alley. Their recorded material is reminiscent of the 80’s new wave that inspired them, but the duo is perhaps better known for their contagious enthusiasm and the danceable, jump-around spirit that has made their numerous sold-out Chicago gigs so popular.

Though this Denver show was the second to last on an extensive US and Canadian tour, the group did not lack energy. Frankel began the set with a solo ballad written on the road, accompanied only by his guitar and harmonica. The crowd swayed slowly to his voice. The rest of their set established a different tone. Bailoni and drummer Justin Vitori joined Frankel on stage and the band launched into a dark and atmospheric groove. Confusion echoed throughout the crowd until the group upped the tempo and moved into the unmistakable shining synths of their song “Violent.” It seemed impossible not to be drawn in by the song’s hopeful, often romantic, sing-along lyrics, as Bailoni flew back from his keyboards to join the masses in dance, eyes closed and assured by the room’s immediate excitement.

The first song set the tone for the rest of the night, creating a comfortable space to enjoy the bands grab bag of retro jams. Other favorites from the night included the driving, full spectrum song “Death” as well as the easier going ode to drinking with friends “Red Wine,” a staple of Grapetooth. In fact, their name is an homage to the teeth-staining qualities of the beverage.

Grapetooth manages to make their shows something more than just a concert; they feel just as much like a house party whose soundtrack happens to be an interesting 21st-century take on 80’s aesthetics. After just a few songs, it seemed like they had gotten the entire crowd moving along with them, grinning and dancing. Another song about wine, “Blood,” saw fans jumping up and down to the descending synth lead and straightforward yet catchy drums.

As the band began their final song of the night, the bouncy, ambiguous “Trouble,” fans belted “I don’t mind living, I don’t mind giving it up” drowning out vocals from the speakers. Halfway through the song, Frankel invited the crowd on stage with them, and dozens of concertgoers flooded Larimer Lounge’s small platform to jump around with band members and finish out Grapetooth’s unforgettable set.

After the band left the stage fans wanted more and demanded an encore. Having exhausted their repertoire of songs, Grapetooth instead joined opener James Swanberg (a stalwart of Chicago’s underground music scene) on stage for his song “It’s No Wonder We’re in Love” with Frankel playing drums while Bailoni and Vitori danced and sang with Swanberg. The performers shared kisses among one another as the night came to a close. A fitting end to the evening, as it’s no wonder we’re in love with Grapetooth’s blissful brand of synth pop.

Cameron (aka CJ) studies Spanish Language and Literature as well as Molecular Biology at CU. He enjoys reading and listening to music all by himself.