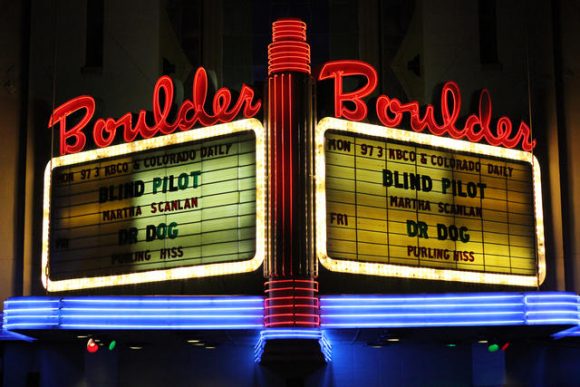 Indie folk/rock band Whitney will perform live on Wednesday, Aug. 28 at the Boulder Theater. The event will be sponsored by Urban Outfitters and outdoor recreation brand Fjällräven for a night of free food, prizes and music.

Whitney began as a collaboration between former Smith Westerns guitarist, Max Kakacek and Unknown Mortal Orchestra’s drummer, Julian Erhlich. The two created Whitney as a duo in which Erhlich sings and plays drums while Kakacek drives the band with his smooth and soothing guitar licks interwoven with summer twang. Groovy and easy to dance to, the duo’s work contains songs of love and longing.

In 2016, Whitney knocked the independent music scene down with their debut album A Light Upon The Lake which grew in popularity earning them Pitchfork’s “Best New Music” accolade as well as leading to a three-year tour. This year, Whitney is back again with their second album, Forever Turned Around. The sequel has already gained traction with the release of their EP,  Used to Be Lonely.

After coming off of an enormous run of shows around the world, fans were left with uncertainty as to how Whitney could produce a follow-up album to A Light Upon the Lake without falling into the trap of familiarity vs. the abstract as so many bands do. With the release of three new songs this past June, fans were given the gratification they longed for as the tracks fell in line with the same sound of country-twang alternative rock which initially put them on listeners radar.

Tickets are available online at a first-come, first-serve basis. Doors for the show will open at 6:30 p.m. All tickets are general admission. This is a show that will be highly anticipated and will sell out fast. More information can be found here.

Zack is currently entering his fourth year at CU with a Major in Journalism. He is the Head Arts Editor at CUI. He splits his time between going to concerts and backpacking. He likes to focus his time reporting on independent music. You can follow him on Instagram @zacosphotos