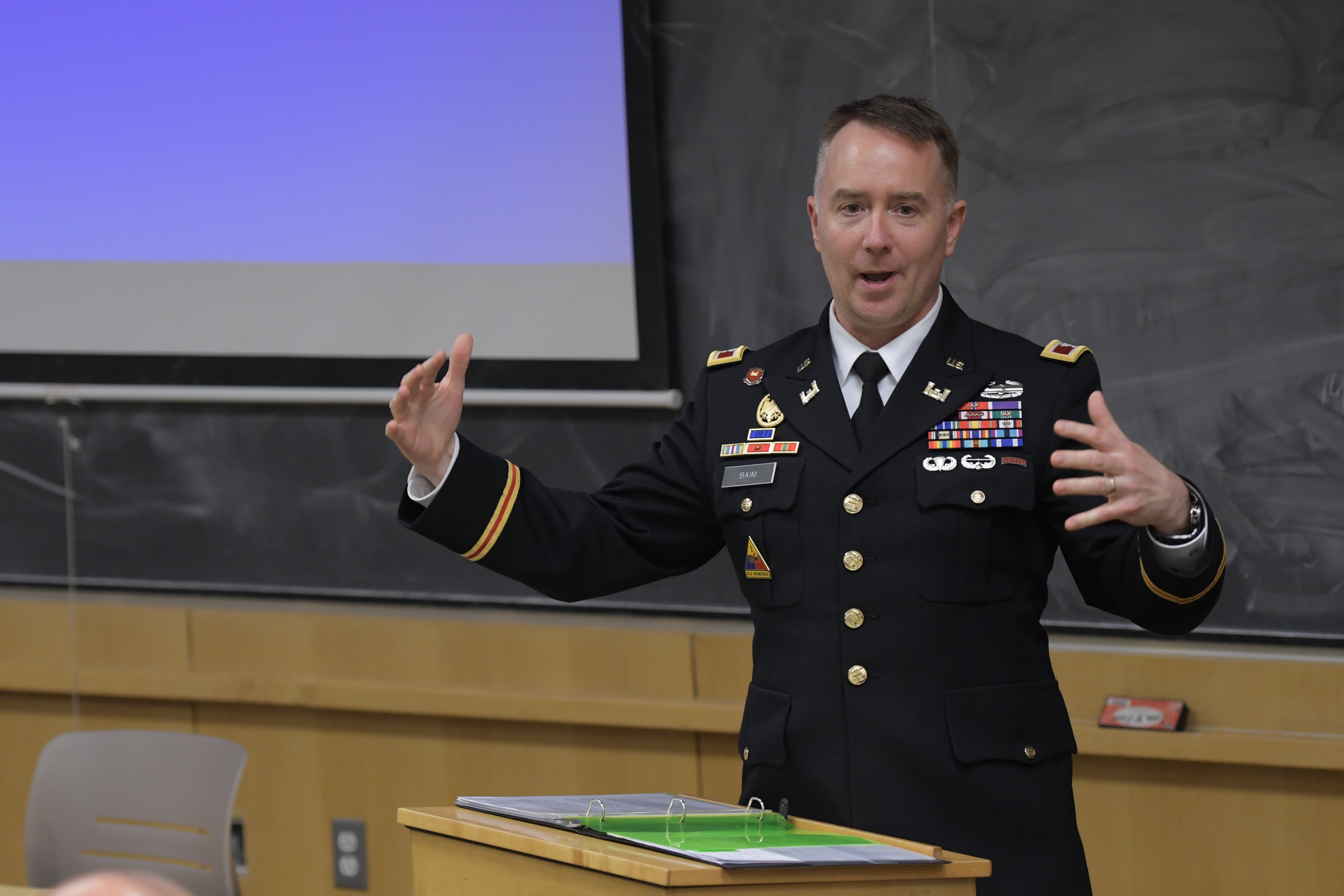 On Thursday, the United States Army War College (USAWC) brought three active duty military members to the University of Colorado Boulder campus to discuss and defend their research as well as receive criticism from the audience.

Col. Mike Baim, Lt. Col. Jason Johnson and Col. Trina Rice explained how their firsthand experiences across the world have helped them in their studies. These military members are earning their second, third, or, in one case, fourth master’s degrees through USAWC. The program allows for students to visit colleges across the country and defend their research.

Baim found himself in Nicaragua not long after graduating from CU Boulder in 1997. Only special operations were allowed in the country.  Baim delivered aid after the second deadliest hurricane hit the country which resulted in over 10,000 fatalities.

Being in Nicaragua was the first step in working in humanitarian aid in the army. In 2003, Baim was in Iraq and realized that it was common for multiple countries to provide aid to one area.

Baim explained that his experiences in these countries have shown that humanitarian aid does assist in nation building but often has issues bureaucratically. When multiple countries are giving aid, it can make bureaucracy complicated.

Doug Snyder, the International Affairs Honors Program director, critiqued Baim’s speech. He explained that while humanitarian aid can be helpful, it should be made clear that it doesn’t have the cleanest track record. Snyder cited Kosovo and Yemen as possible examples.

“The U.S. could be more consistent in this promotion of humanitarian ideals,” Snyder said.

Johnson served 26 years in the army infantry. He explained that after being deployed in Afghanistan every year since 2002, he has extensive knowledge on how military operations worked in the area.

Training an army and government to work properly takes a large amount of time, according to Johnson. The U.S. will continue to work within the country until they are educated enough on nation building to work independently. Johnson argued that it is pointless to question if the U.S. should be in Afghanistan because they already are. The question that exists now is: what else needs to be done for this country to thrive?

“I wish it had not taken so long but we have taught them to fish, not given them the fish,” Johnson said.

Fluri questioned whether the tactics used in Afghanistan were culturally appropriate. These tactics include house raiding and crossing the line between a soldier in a foreign country and a friend of the locals.

Maia Mitchell, a CU Boulder undergraduate, specifically came to the talk to hear about relations with Afghanistan.

“I was interested in how relationships begin with trust between civilians and military,” Michelle said.

“The surest way to win a war is to be prepared,” Rice said. “We the people are America’s source of strength.”

It was not until 2016 that women were allowed in all military roles, and transgender people are not allowed in the military currently. Rice said that even though this is the case, they do have people making a difference in the government. The Congress officials elected in 2018 was the most diverse in U.S. history. Rice believes these people will help change the military and make it more diverse.

“Diversity at home is a fact and will be done if ignored,” Rice said. “It is in their vital interest of the U.S.”

“I wanted to add the idea of white supremacy,” William Wei, a CU Boulder history professor and audience member, said.

According to Rice, overcoming challenges to diversity is a daily struggle. She believes with the proper support then anything is possible. Having a military that properly represents the U.S. is something Rice hopes to achieve in the near future.