CU’s Shane Gatling has another dominant performance versus UCLA 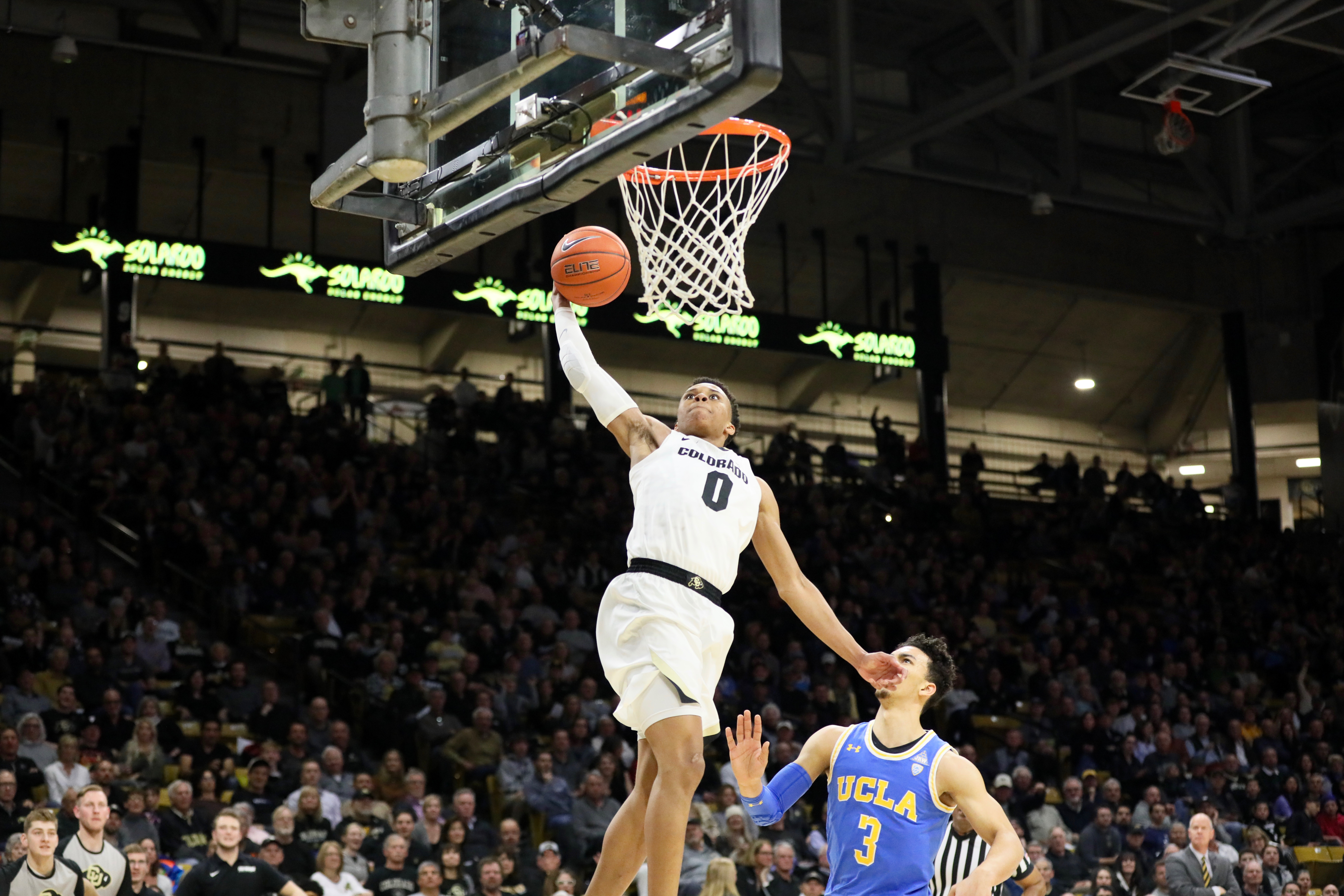 Junior guard Shane Gatling throws down a dunk during the second half of play at the CU Events Center. March 7, 2019 (Nigel Amstock/CU Independent)

Colorado Buffaloes junior guard Shane Gatling has scored 20-plus points three times in 2018-19. Two of those three such games have been against the UCLA Bruins.

Fans should need little reminder of Gatling’s performance at the Pauley Pavilion in Los Angeles on Feb. 6 in CU and UCLA’s first meeting of the season, when he erupted for a career-high 28 points, 21 of which came from his career-high seven three-pointers that he sank.

UCLA came to the CU Events Center Thursday evening, to complete the season series between the two squads. In a game with significant Pac-12 Tournament seeding implications, Colorado put on a show, crushing the Bruins, 93-68.

The 93 points scored by CU marks a season-high versus Pac-12 teams.

Heading into the game, UCLA sat in sole position of third place within the Pac-12, was riding a three-game win streak and had scored 90 or more points in two of those three recent victories.

Unfortunately for the Bruins, their hot streak was stomped into oblivion by the Buffaloes. As a team, the Buffs shot 49 percent from the floor and dominated at the glass, nabbing 47 rebounds to UCLA’s 35.

All around, it was a pretty complete and convincing victory for Colorado as the Buffs continue their quest to secure a fourth place or better regular season finish before the start of the Pac-12 Tourney next Wednesday, March 13 in Las Vegas.

While sophomore guard/forward Tyler Bey recorded the best stat line for Colorado, contributing 27 points and 13 rebounds for his fourth straight double-double, Gatling was right behind him.

The junior from Baldwin, New York put up 26 points on his own on 7-of-13 shooting to go along with three assists. Gatling was a perfect 10-for-10 from the charity stripe in the win, as well.

“[Gatling] has the ability to do more than just be a three-point shooter and I think he showed that tonight,” head coach Tad Boyle said. “He is a good shooter [and] people know that…he proved tonight that he’s got a pretty good pull-up [jump shot]…he’s got to be that multi-dimensional players for us because he can score the ball in a lot of different ways.”

Gatling’s zero missed shots from the free throw line marked the best such performance since Derrick White went 12-of-12 against Arizona State in 2017.

“I don’t know what it is [about me playing so well against UCLA],” Gatling said after the win. “I think my teammates just kept finding me…I tried to make plays for others, attack the zone, shoot pull-ups and layups. I just tried to do other things to impact the game.”

Gatling drew first blood for the Buffs 41 seconds into play, knocking down a three-pointer for the game’s opening basket.

About a minute and a half later, the Buffaloes were up 7-0. For most of the first half, Colorado maintained a significant lead over the Bruins. The closest UCLA came was within four points at the 5:42 mark, but the Buffs still led 24-20.

At halftime, Colorado led, 37-27. Gatling capped the first minutes of play with nine points in 16 minutes on the floor.

He did the most damage in the final half, as he and Bey both scored 17 points apiece in the last 20 minutes.

“It’s not a competition or anything our there,” Gatling said. “We’re just trying to win the game out there and have fun at the same time.”

Gatling opened the scoring in the second half too, sinking a 15-footer just 14 seconds into things.

Arguably Gatling’s most impressive moment came with 11:34 left in the second half. Gatling created a turnover near half court off of UCLA’s Jules Bernard which turned into a fast break opportunity.

Gatling didn’t waste it, as he turned on the afterburners and lifted off, slamming the ball down for a monster dunk that put Colorado up, 56-42. Later on, he made five straight points for Colorado, adding to CU’s comfortable lead.

With 1:35 left to play and the Buffaloes leading, 90-65, Boyle yanked Gatling along with the majority of the Buffs’ starters for the evening.

Heading into the regular season finale versus Southern California, the Buffaloes will be fresh off arguably their most dominant Pac-12 performance of the year.

“It gives us some momentum,” Boyle said. “We’ve been playing well of late…the mindset and mentality this team has been really good very since we lost to Oregon State at home…this is one game and now it’s time to focus on USC and not worry about seeing in the Pac-12 Tournament.”

Colorado and Southern Cal tip-off from the CU Events Center on Saturday, March 9 at 3 p.m. MST.