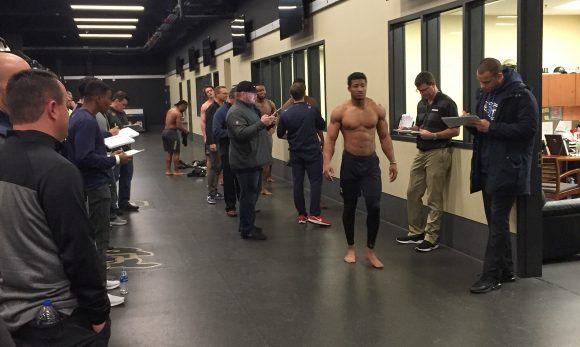 There were 11 former Colorado Buffaloes who were on field for the Pro Day performance measurements, all vying for NFL attention via a rigorous battery of testing. By all accounts, it was a pretty successful afternoon for the draft-hopeful Buffs.

“Most of us PRed [hit a personal record] today, that’s all we can ask for,” said tailback Kyle Evans. “We put on a show for the scouts.”

Evans, who performed particularly well in his individual tests, was very upbeat in his post-Pro Day gathering with the media. The former CU tailback finished with the second-best 40-yard dash time (4.50) seconds, bench press (26 reps) and vertical jump (36.5 inches). He also had the fastest three-cone drill time at a quick 6.93 seconds.

“Out here, I just tried to show them how athletic I am and show them stuff they might not see on tape,” he said. “…that was pretty much my goal today and I think I did pretty decent.”

The 5-foot-5, 180-pound back performed big at his Pro Day. Evans was pretty pumped about his other 10 teammates’ performances as well.

“[We had] a little fun, do what we do best— that was the easy part,” Evans said. “We all had a good time today and most of us PRed in a bunch of different places.”

There was another former CU tailback in attendance who turned some heads with his impressive Pro Day performance, as well. Travon McMillian ran the fastest 40-yard time of the day, at 4.47 seconds.

“I think I performed pretty well,” said McMillian. “I did well on the 40 (yard dash) and the bench press and that’s what I really wanted to impress on…I’m impressed with my performance.”

In addition to his impressive 40-yard time, the stout 5-foot-11, 203-pound tailback displayed his strength off the field, too. McMillian finished with the third-most bench press reps (22) of his teammates. He surprised even himself.

“I didn’t think I’d hit 22 times on the bench,” admitted McMillian. “Last time I hit the bench, I hit it 17 times. Getting to 22 is a good number for me, especially at 203 (pounds). With my weight, most guys at the [NFL] Combine are weighing 220 and hitting about [the same]. Being at my weight, being able to do that, I think is a good number for me, as well as running that 4.4.”

The annual Pro Days are one final chance for prospective NFL draftees to prove what they can do on the field. It’s especially important for athletes who perhaps felt their numbers during the season could’ve been better, or if an injury slowed them down during the year, the Pro Day showcase is a chance to rectify any doubts that NFL teams may have while watching them throughout the season.

Take wide receiver Juwaan Winfree for example. The former redshirt junior was lost for his entire 2016 campaign due to a torn ACL he suffered in practice; and then in this most recent season, he only played in seven of the Buffaloes’ 12 games due to an ankle injury.

Winfree was happy to get another opportunity to show the NFL what he can do.

“I’m just glad I got the opportunity to show these scouts what I can do fully healthy and fully being back to myself,” he said. “It feels good.”

Winfree finished tied with Evans and linebacker Drew Lewis for the second-fastest 40-yard times at 4.50 seconds. It appears his ankle is fully healed as the wideout prepares for the next step in his football career. For now, he likes where he’s at, but as most athletes will say, there’s always room for improvement.

“It felt great to compete back at home…It felt really good, it felt really comfortable to be able to peak at my best,” Winfree added. “I felt there were some things I could’ve done better but overall I feel like I had a good day.”

One former CU athlete who used his Pro Day to improve was defensive back Evan Worthington, who was the only Buff represented at the NFL Combine last week.

“They told me it was a good combine for me, I put up some good numbers,” said Worthington. “…but I feel like I could’ve done better.”

Worthington was disappointed with his 40-yard time at the Combine, but performed much better at Colorado’s Pro Day. While he ran a 4.63 at the Combine, Worthington shaved a full tenth of a second off his original time while at CU’s Pro Day. He ran the 40-yard dash in 4.53 seconds on Wednesday. Perhaps it was the comfort of familiar territory that calmed the nerves for the future NFL prospect and allowed him to perform better.

“I love being back here,” Worthington said. “It’s been a great time with everybody, watching them do their thing out here.”

Some other notable standouts from Colorado’s Pro Day were wide receiver Kabion Ento and Lewis.

Ento showed the scouts his athleticism and astounding ability to jump. The 6-foot-1 receiver recorded the highest vertical jump by a whopping five inches, leaping 41.5 inches high. If Ento was at the NFL Combine, his vertical measurements would’ve ranked him No. 4 among wide receivers. The wideout’s broad jump was tops at CU, too, leaping 11 feet and one inch. Ento’s 4.52 second 40-yard time was the third-best of his teammates.

Lewis proved to be the most athletic defensive player at CU’s Pro Day. The linebacker had the third-highest jump at 34 inches and tied for the second-best 40-yard time at 4.50 seconds. Lewis’ 10-foot-9 broad jump was the second longest on the afternoon.

With another Pro Day in the books for the Buffaloes, it’s now a waiting game for the 11 NFL-draft hopefuls. But for now, the former Buffs can relish in the fact that they’ve done all they could for now. Soon enough, some – if not all — of CU’s draft—eligible players may be realizing their NFL dreams.

“It feels like everything,” Winfree said. “It’s something you dream about and to get the opportunity to play in front of the NFL [scouts] and show what you can do so you can get [to the NFL]. I feel real great and confident. It’s a blessing, a true blessing.”