Colorado looks to take care of business against UCLA 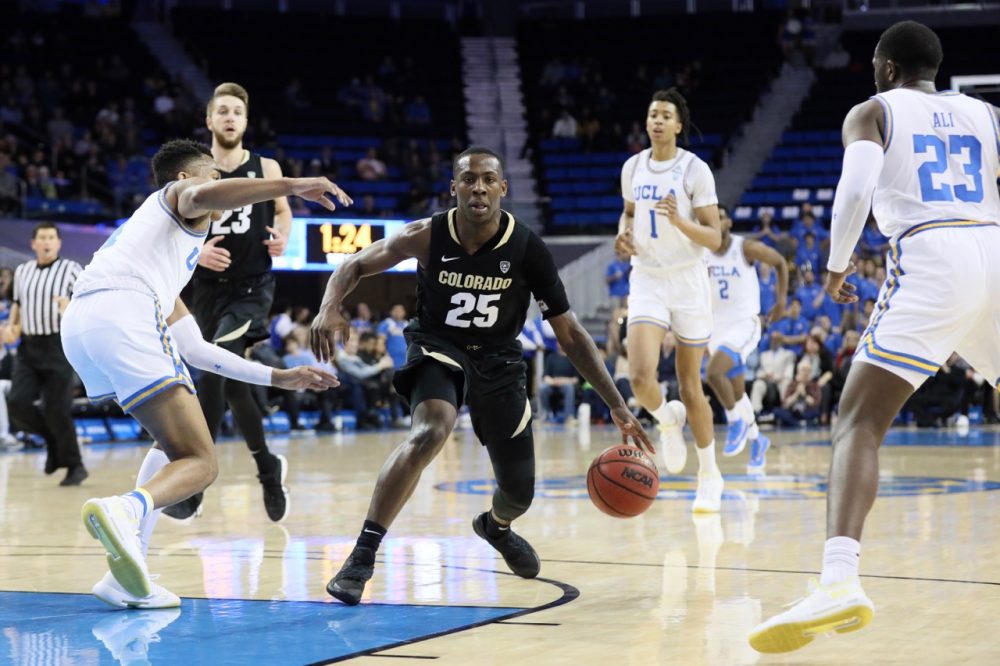 Sophomore guard Mckinley Wright IV drives the ball down the court during the first half of play at Pauley Pavilion. Feb. 6, 2019 (Nigel Amstock/CU Independent)

With two games left in the regular season, the Colorado Buffaloes men’s basketball team sill has a shot at getting a first-round bye in the upcoming Pac-12 Tournament.

Currently sitting in sixth place, the Buffs have to finish in the conference’s top four to earn a bye, as the teams that finish in one of those four positions earns the one-game break. They’re going to need a lot of help from other teams in the conference, however—and most importantly, CU has to win both of its remaining games to even have a chance.

The hopeful climb to No. 4 starts Thursday against the University of California, Los Angeles, which will be coming into Boulder riding a three-game win streak, the longest currently in the Pac-12.

With an average of 78.6 points per game, the Bruins are the highest scoring team in the conference, and the Buffs know they’re going to have to keep up their defensive intensity from their win against the Utah Utes on Saturday if they hope to win.

“We’ve got to keep doing what we’re doing. Playing defense together, playing for each other,” sophomore guard/forward Tyler Bey said after practice on Tuesday. “We’ve also got to box out because they’re a great offensive rebounding team.”

Rebounding will be a major key for the Buffs, as UCLA is the leader in the Pac-12 with 41.4 a game and are second in offensive boards per game with 11.8. Coming off a game where they allowed Utah to grab 12 rebounds on offense, CU needs a better performance on the glass to have shot versus the Bruins.

One player the Buffaloes are likely to call on to help crash the boards is freshman forward Evan Battey, who despite only grabbing one rebound in CU’s 84-73 win over the Bruins in Los Angeles back in February, knows just his presence alone will help his teammates in the paint.

“Rebounding is a hard thing to judge,” Battey said. “The game I played against UCLA the first time, I only had one or two rebounds, but I was boxing out the whole game. It allows my teammates to get the rebounds. I’m not worried about the numbers, I’m just worried about keeping them off the glass.”

Along with Battey, the Buffs are going to need a big game from his partner in the front-court. Bey has been phenomenal all season, but his play of late has been one of the biggest reasons why Colorado still has a chance at a top-four seed. He’s put up a double-double in each of his last three games and six of his last eight.

“I’m just letting the game come to me and just making hustle plays [and] defensive rebounding as much as I can for this team”, Bey said when asked about his recent play.

When UCLA comes to the CU Events Center on Thursday, the Buffaloes are not just hosting a desperate team that is also vying for a bye in Las Vegas, they’re also going to have to match the intensity of a team that wants payback for the earlier matchup in February and redemption for the two losses CU handed them in the 2017-18 season.

The Bruins are currently in a three-way tie with Oregon State and Utah for the Pac-12’s third seed and plan to stay there. Head coach Tad Boyle is preparing his players for a spirited effort.

“Anytime you play a team that you’ve beaten a few times, or even one time for that matter, they have the emotional edge,” Boyle said on Tuesday. “We have to make sure that edge is nullified based on our concentration and readiness to play.”

For any team nearing the end of their season, there might be some temptation to look ahead at the postseason. But ask anyone on the team and they’ll tell you they’re taking the remainder of the schedule game by game.

While that might be the most overused mantra in all of sport, this Buffs team has lived up to it all season. There’s no better example than Saturday’s win over Utah. Even after blowing an early 8-0 lead, the Buffs responded and fought hard the entire game. Their ability to focus purely on what’s happening in the moment is all thanks to Boyle.

“Same thing I said before, which is get better today in practice and how do we beat UCLA,” Boyle said when questioned about how he keeps his team present and not looking forward. “Our team has bought into that. That’s why we’ve been able to bounce back after tough losses.”

After losing four of its first five games in January, there was doubt that Colorado would have a legitimate shot at a top-four seed. Now, having stormed their way back up the standings, the Buffaloes would be disappointed if they don’t end up with a bye.

The Buffs take on the Bruins at the CU Events Center on Thursday at 7 p.m. MST.