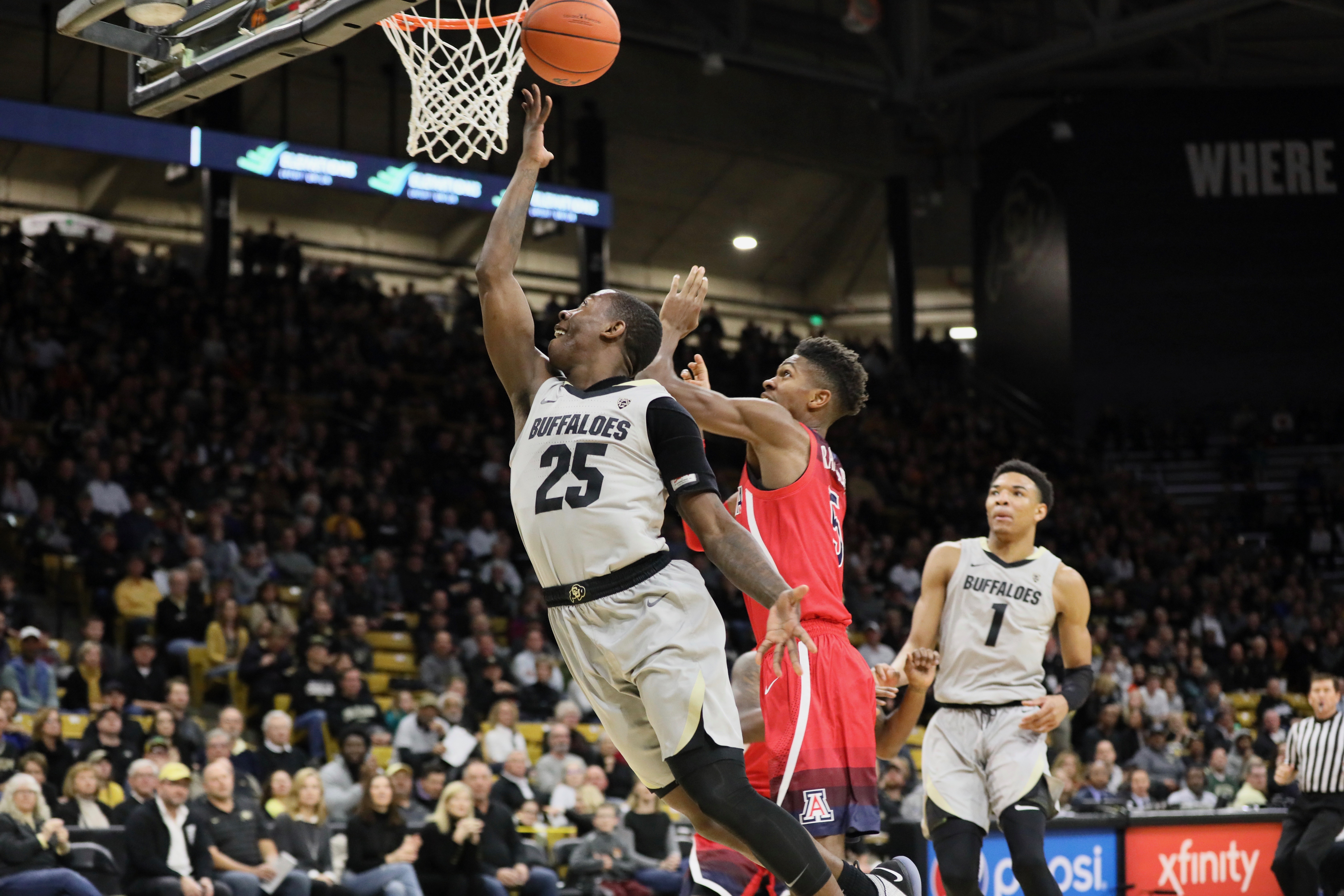 Sophomore guard McKinley Wright IV elevates the ball toward the hoop during the first half of play at the CU Events Center. Feb. 17, 2019 (Nigel Amstock/CU Independent File)

The Colorado Buffaloes men’s basketball team extended its winning streak to five games on Sunday evening. This time, it was the Arizona Wildcats who couldn’t stand in the way of the charging Buffaloes.

The five wins in a row during league play are an impressive feat for the Buffs. CU hasn’t won that many straight against their respective since 2006, when Colorado was playing in the Big-12.

It’s the most consecutive conference wins for the Buffs in the Tad Boyle era, and it’s also the most since the program joined the Pac-12 conference in 2011.

So how do they keep doing it?

“I think it’s executing great plays and knowing personnel,” junior guard Shane Gatling said. “When we execute, we get great shots. Even if we miss a great shot, someone is there rebounding or we’re getting the ball back somehow, making hard-working plays … We’re just playing more team basketball than we have in the past.”

The team gelling into a more cohesive unit and playing what Gatling calls “team basketball” has certainly helped CU in its last handful of games. That, and what the junior calls “getting great shots.”

The Buffs stood fifth in the conference in shooting percentage at the start of the game with a respectable 46.1 percent.

It was a marked improvement from the last time these two teams met earlier this season, when the Buffs paid a visit to Tucson on Jan. 3. That game saw CU shoot a very below average 35.8 percent.

The Buffs were able to zoom past ‘Zona on Sunday by shooting nearly 60 perfect from the floor, which is some hot-handed shooting. That’s a theme that’s been playing out during Colorado’s current win streak.

As a matter of fact, the Buffs’ 55.8 percent field-goal shooting on Sunday was one of the best for the Buffaloes all season long — the third-best to be exact. It’s the best the Buffs have shot since the nonconference portion of the schedule at the beginning of the season.

CU dropped a hundred on Drake in the season opener on Nov. 13 by shooting 58.9 percent on the floor. Two weeks later, the Buffs took off at Air Force in Colorado Springs, landing 58.6 percent of their shots from field goal.

During the last five games, the Buffaloes have averaged a touch over 50 percent shooting. For comparison, during the Buffs’ first eight games of conference play, which resulted in a 2-6 record, CU was shooting just 43 percent.

The game against Arizona on Sunday is a prime example of solid shooting. The Buffs opened the game by making an impressive 9-of-10 from the floor, en route to an early 22-11 lead ten minutes into the contest.

The Buffs, however, cooled off considerably, failing to make a field goal in the last seven minutes of the first half. The scoring drought allowed the Wildcats to catch up, cutting Colorado’s lead to 34-28 at halftime.

Despite the drought at the tailend of the first half, Colorado still clocked in at a solid 60 percent on field-goal shots, making 12-of-20 from the floor. The Wildcats on the other hand were making a poor 37.9 percent of their field-goal shots.

The Buffaloes’ scoring drought continued into the start of the second half, totaling nearly nine minutes of point-less action for CU. The drought and subsequent ‘Zona shooting spree tied the game at 36 with a little more than 15 minutes left in the game.

“I don’t think we had as good of movement as we had in the beginning of the game,” junior forward Lucas Siewert said. “I don’t know if we were tired or not, but we can’t afford that too much, so I’m glad we got ourselves back in the game. We just have to play through that stuff.”

After blowing an 11-point lead and allowing a quietly dangerous Arizona team to catch up, it more than deflated the air in the building at the CU Events Center. But like Siewert said, the Buffs played through it. 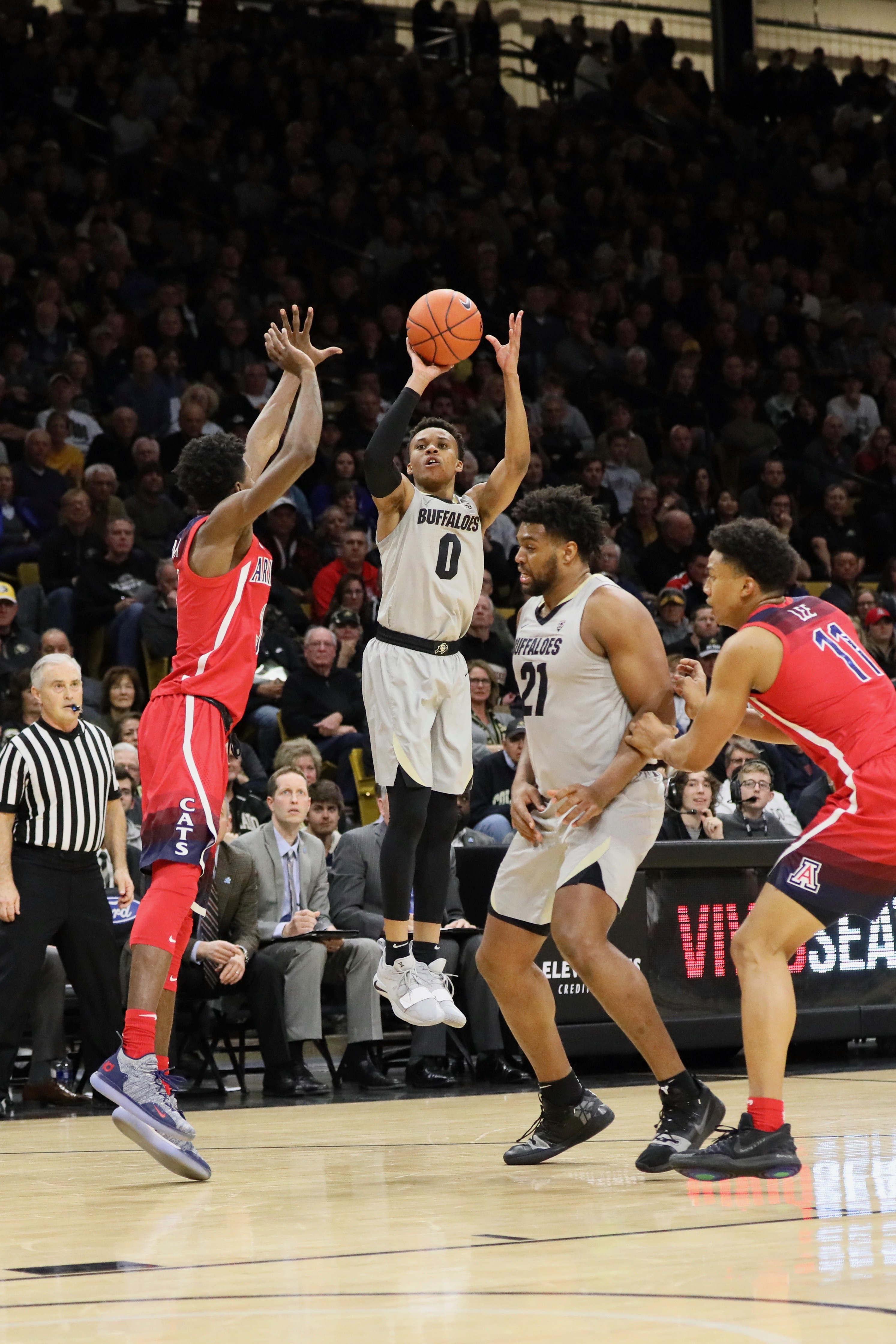 Junior guard Shane Gatling shoots a jumper during the second half of play at the CU Events Center. Feb. 17, 2019 (Nigel Amstock/CU Independent)

“Extra passes, movement, that’s what coach really emphasized in this game,” Gatling said. “He likes us getting in the paint and making extra passes, so that’s what we tried to do. We tried to get the best shots possible every possession.”

After watching their lead dwindle to a tie, McKinley Wright single-handedly carried the team out of the shooting desert by making CU’s next seven points on his own. Wright’s scoring surge led the Buffs on a 17-5 run to put the Buffs ahead 53-41, forcing Arizona head coach Sean Miller and the Wildcats to take a timeout with just under 10 minutes remaining in the game.

Wright and the rest of the Buffs finished the second half with a fruitful 52 percent make-rate, propelling CU to another solid shooting performance. It’s the theme that’s been developing over the Buffaloes’ last handful of games.

Over the course of its last five games, Colorado has climbed the Pac-12 rankings in field-goal percentage. After Sunday’s solid shooting performance against Arizona, the Buffs have climbed to the third-best percentage in the Pac-12 at 46.4 percent.

Now, the Buffaloes will hit the road for their final trip of the season, taking on Washington State and Washington, who own the No. 6 (tied) and No. 4-ranked (tied) field-goal percentages in the conference.