Colorado gets best of Evan Battey in win over Utah 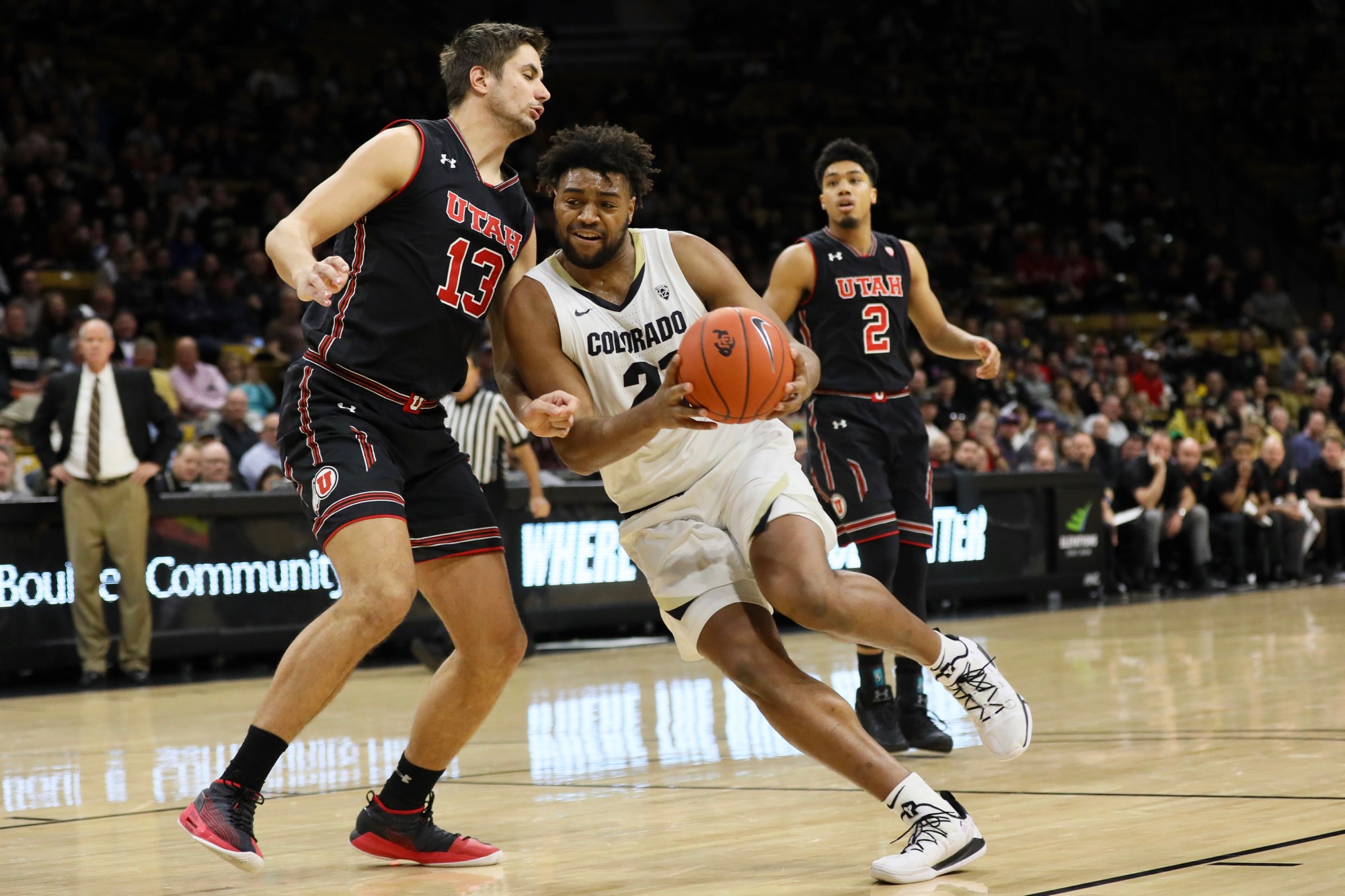 Freshman forward Evan Battey drives toward the basket during the second half of play at the CU Events Center. March 2, 2019 (Nigel Amstock/CU Independent)

Early during Saturday’s game between the Colorado Buffaloes and Utah Utes – a game with pivotal Pac-12 Conference implications as the end to the regular season nears, freshman forward Evan Battey was called for his first foul as the whistle blew at the 18:25 mark of the opening half.

One minute and 35 seconds into play, Battey was in the dog house; the foul prompted head coach Tad Boyle to yank him from the game in favor of junior forward Lucas Siewert.

In the first half of last week’s 64-55 loss at league-leading Washington, Battey had accrued two fouls in a little over three minutes into the game, forcing Boyle to swap Siewert in.

Battey leads Colorado (17-11, 8-8 Pac-12) in fouls this season with 82 after the 71-63 win over Utah, yet after that early first foul appeared to be destining Battey to suffer a dink to his potential performance in similar fashion to the Washington game, he was near flawless in multiple regards for the rest of his time on court versus Utah.

In just under 28 minutes on the floor, he scored 15 points for the Buffs on 6-of-9 shooting. He drew four fouls in the game and made three free throws to complete the effort.

On Saturday, Colorado flourished with the presence of Evan Battey firing on all cylinders in the immediate aftermath of his four-point, 17-minute contribution against the Huskies on Feb. 23.

Battey’s role in Saturday’s win was major. The majority of his shots were like homing rockets locked on to the net of the basket. All night, he displayed impressive footwork, moves, fakes and overall ball handling, all while playing disciplined basketball for the vast majority of the game.

“Trying to keep our bigs out of foul trouble [was] key,” Boyle said after the win. “[Tonight] was a physical game and Evan welcomes that. I thought he did a really good job of taking his time…he’s important to us. You can just see him coming each and every game.”

Battey first got on the board near the midway part of the first half. In one minute and two seconds, he hit back to back shots in the paint through traffic, helping CU tie the game at 14 with 10:48 to go until halftime.

He hit one more shot near the rim for his seventh point of the night with 3:11 before halftime.

Battey contributed defensively as the half winded down, as with 51 seconds to go and Colorado up, 31-26, he drew his second foul of the game on the Utes’ Novak Topalovic.

“He just knows what he needs to do,” said Buffs sophomore guard D’Shawn Schwartz. “…If coach tells him he needs to do something, he’s going to do it and do it well.”

The Buffs exploited a first half in which they held the sharpshooting Utes to a 3-of-16 make rate from long range and led after 20 minutes of play, 35-26.

Early into things as the second half got underway, Battey made his presence known for the Buffs, scoring six points, registering a steal and drawing another personal foul, this time on Utah’s Jayce Johnson, in the opening six minutes.

His 15th and final point came in the form of a layup with 9:15 left to play, which gave Colorado a double digit lead of 53-42. After the Utes responded in kind with a basket on their ensuing trip to the offensive zone, Battey dished the ball to sophomore guard/forward Tyler Bey for another layup.

The Buffs need to defeat UCLA and Southern Cal in their final two games before the Pac-12 Tournament, both of which are at home, while also hoping for help in the form of as many as losses as possible by the multiple teams within the middle of the conference.

After Saturday’s win, CU sits tied for sixth in the Pac-12 with Arizona, Stanford and USC. Thus, wins against fourth-place UCLA and Southern California would have the potential to either propel or stabilize the Buffs at their current location in conference standings.

Oregon State, 9-6 in Pac-12 play and third in the league, leads 10th-place Oregon by only two games. For the Buffaloes, failing to win out would almost certainly push them to the lower half of the standings as all teams prepare for the Pac-12 Tourney.

With so much on the line in the next week, Colorado could use as many repeats of Saturday’s performance from Battey as possible.

“He’s much more confident,” Boyle said. “He’s such such a force down [low]…he’s really going to be a guy we can rely on to be a playmaker as a post guy.”

Cu and UCLA tip-off from the CU Events Center on Thursday, March 7 at 7 p.m. MST. 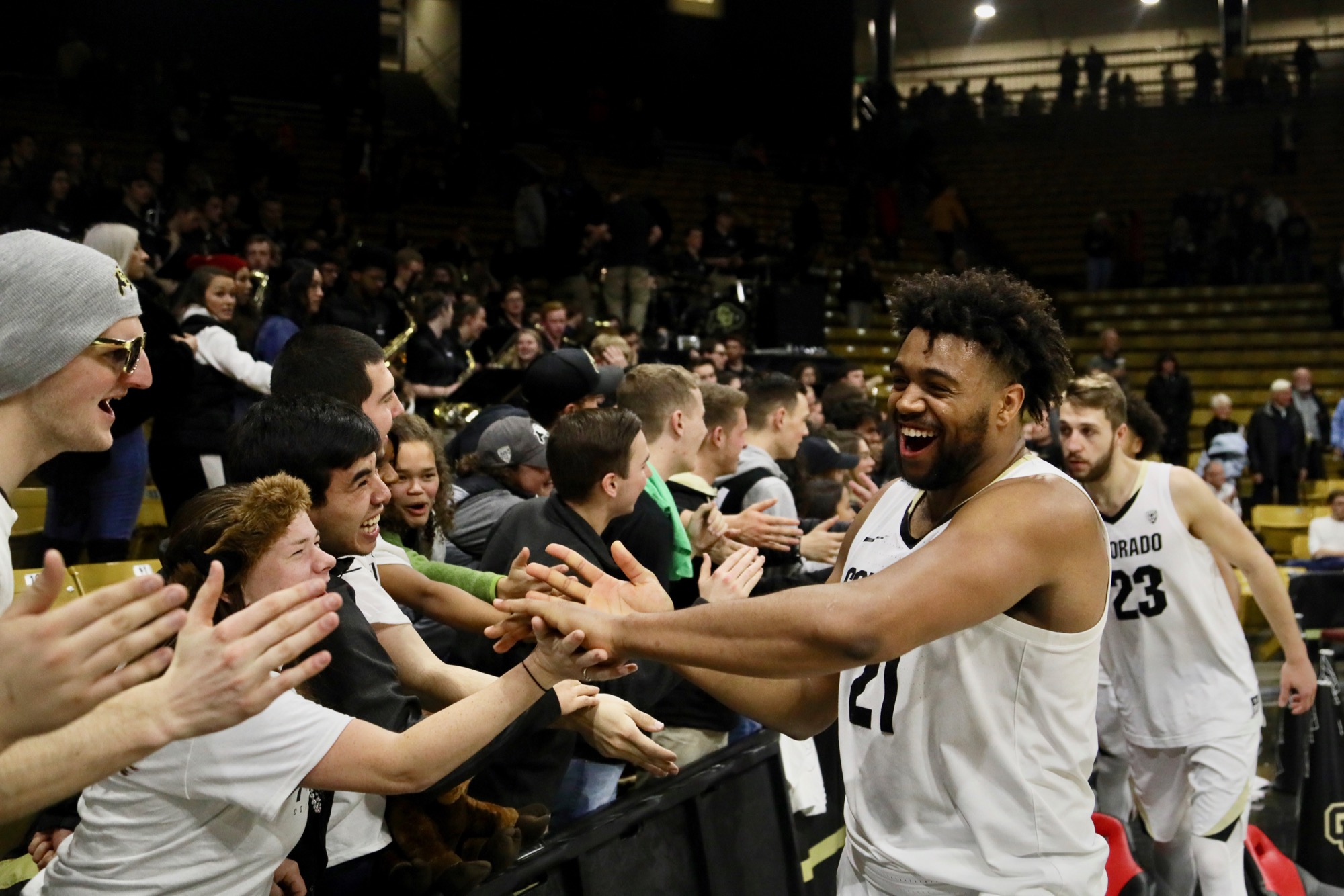