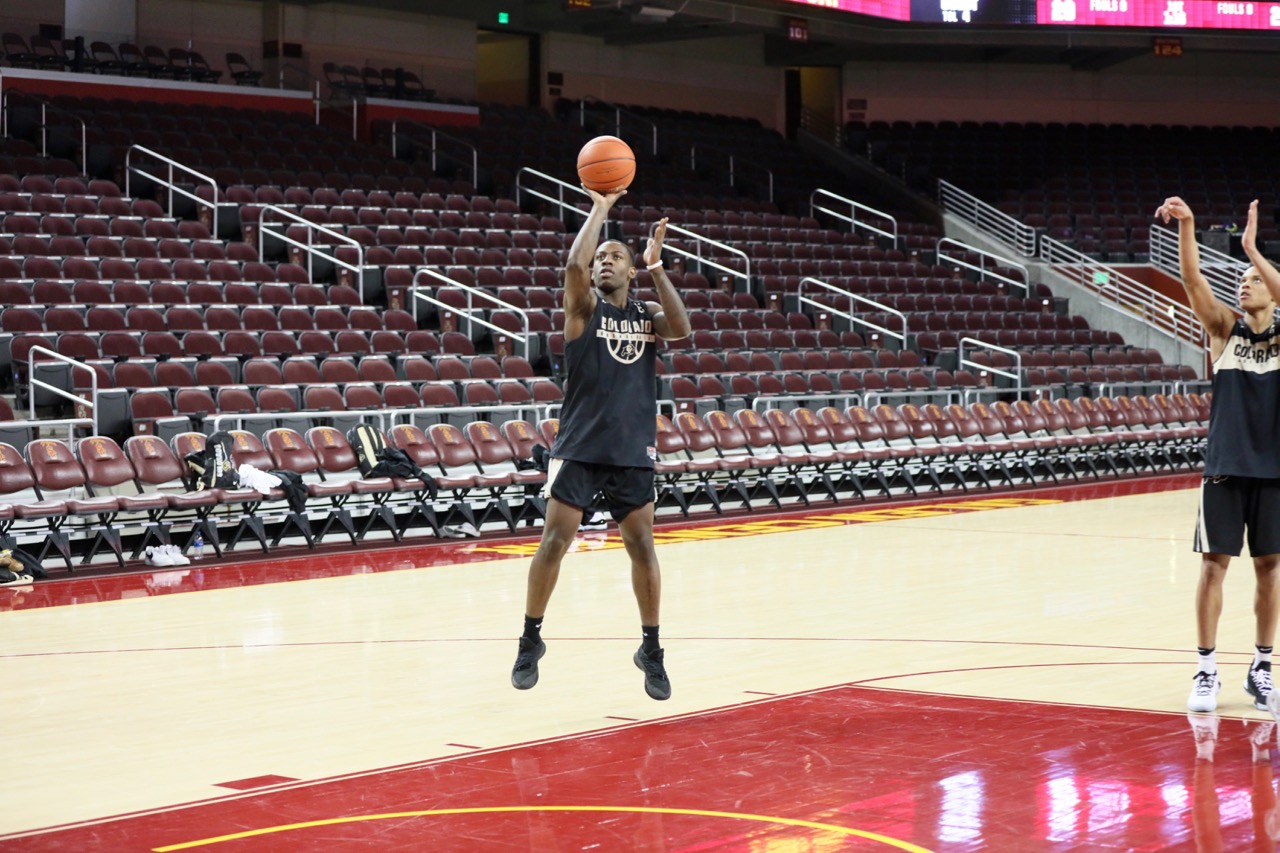 Sophomore guard Mckinley Wright IV shoots the ball during practice at the Galen Center. The Buffs will tipoff against the USC Trojans tomorrow at 8 p.m. MST(Nigel Amstock/CU Independent)

Having defeated UCLA on Wednesday, Colorado will now aim for a sweep on the road before returning to Boulder, something the Buffs under head coach Tad Boyle have accomplished only once (back-to-back wins over Air Force and CSU in 2013) in his tenure at CU.

For the Buffaloes, the game versus USC could have implications outside of Saturday evening. Currently, Colorado (13-9, 4-6 Pac-12) sits in 10th place within the Pac-12 Conference.

However, the Buffs in 10th place and the Arizona State Sun Devils (15-7, 6-4 Pac-12) in second are separated in the standings by just two conference games.

If the Buffaloes can pick up a victory versus Southern Cal, it would extend the team’s win streak to three and provide Colorado with good momentum heading into the final seven games of the regular season.

“[Winning] would be huge,” said head coach Tad Boyle. “After Saturday night, we have five of seven [remaining regular season games] at home…this is a huge game.”

The last time the Buffs took on Southern Cal at the Galen Center, the result was a 72-58 win for the Trojans.

This time around, the pressure is on in a sense, as every victory the Buffaloes can pick up will aid in pencling them in for a higher seeding in the annual Pac-12 Conference Tournament.

“[If] we get this one, then go home for two more games, we have a chance to end this regular season special,” said sophomore guard McKinley Wright IV. “We’re excited. This is a huge game for us [and] in my eyes, it’s another must-win [situation.]”

Despite winning in somewhat of rollercoaster fashion versus the Bruins on Wednesday, Colorado shot 54 percent from the floor as well as from long range.

“Certainly it gives our guys confidence when we made those shots and hopefully that confidence can carry over [on Saturday],” Boyle said.

The Buffs spread the wealth in terms of ball distribution on Wednesday, as the team recorded 22 total assists in the win.

“We don’t care who scores the points,” Wright IV said. “If could be Lucas [Siewert], it could be D’Shawn [Schwartz]…it just goes to show that we really care about each other…we just want to win.”

Standing in Colorado’s way is a Southern Cal squad coming off a Wednesday night loss to Utah. The Trojans (13-10, 6-4 Pac-12) for all intents and purposes are in a similar boat with the Buffs regarding the level of importance attached to Saturday’s game.

“USC has got two really good post players in [Bennie] Boatwright and [Nick] Rakocevic,” Boyle said. “[They] average almost 40 points [per game] between them. Our bigs are going to be really challenged.”

Boatwright, a 6-foot-10 senior forward, has averaged 17.3 points per game in 2018-19 and owns a 47 percent make rate from the floor. Rakocevic, a junior from Chicago, Ill. who stands at 6-foot-11, has hit 51 percent of his shots this year while averaging 16 points per game.

“[If we win this game] we can be in great shape,” Boyle said. “Eight teams are within one game of each other [in the Pac-12 standings.] For us to get that fifth [conference] win is key for us to claw back into the muck. Right now we’re kind of on the outside looking in.”

The Buffaloes and Trojans tipoff at 8 p.m MST on Saturday night. 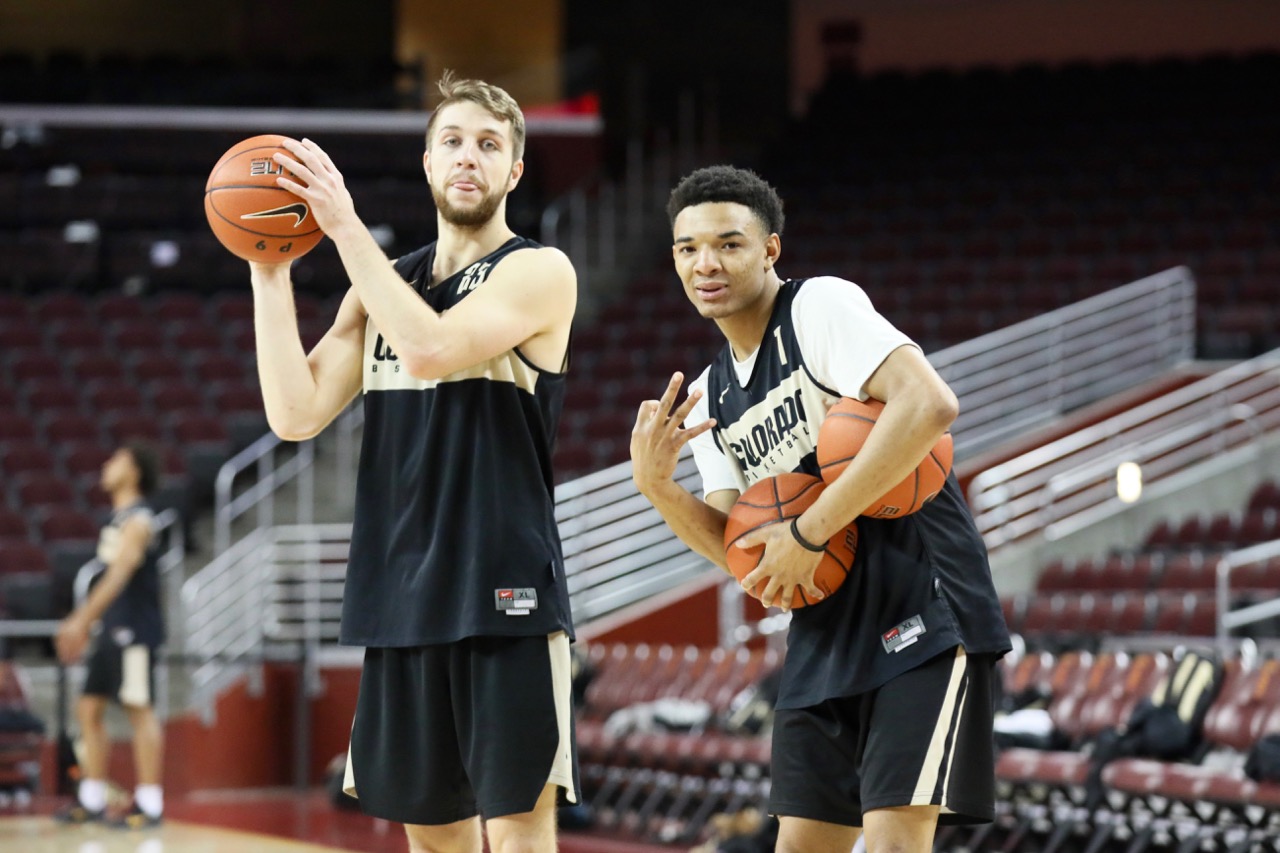 Forwards Lucas Siewert and Tyler Bey pose during practice at the Galen Center. The Buffs will tipoff against the USC Trojans tomorrow at 7pm. (Nigel Amstock/CU Independent)