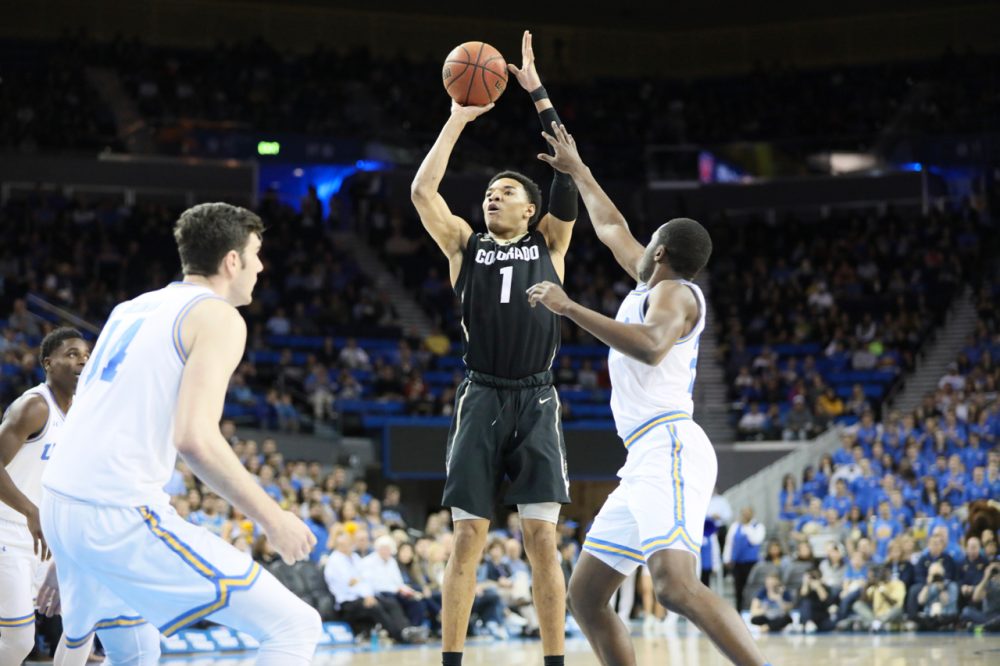 In the wake of a mediocre season, Buffs fans can’t help but wonder how this season would’ve gone with senior forward Tory Miller-Stewart manning the middle.

Miller-Stewart suffered a fractured left metatarsal in his left foot just six games in to the season, leaving a big void in the paint.

Add in the fact that freshman big man Evan Battey failed to meet his GPA requirements, leading to an NCAA ruling that forced him to redshirt in his first season.

So there the Buffs were, six games in to the season with the two best inside threats on the team relegated to a bench presence.

However, freshmen forwards Tyler Bey and Dallas Walton, as well as sophomore forward Lucas Siewert stepped in and held their own, whether they started in place of Miller-Stewart or came off the bench with the rest of the second unit.

Each of them have their own particular strengths, allowing the Buffs to have a three-headed monster at the four and five spots, instead of just one senior plugging up all the minutes.

Bey, who matches the 6-foot-9 frame of Miller-Stewart, has not lacked on either end of the floor.

He’s often been tasked with guarding the opponent’s best big, a tall task considering Bey is listed as a guard in most places.

What Bey might lack in experience and girth he makes up for with physicality and effort.

Despite being at a height disadvantage much of the time, Bey is adept at staying on the ground while defending, but is also not shy to get up and use his long arms to block shots around the rim.

The biggest void that has been left in the absence of Miller-Stewart has been rebounding.

For much of the season, Miller-Stewart was still second on the team in rebounds per game, averaging just under five rebounds in the handful of games he played.

Bey passed him up in the tail end of the year, finishing the season as the team’s second leading rebounder, averaging just over five rebounds a game.

He has made quite the transition this year, as a guard-heavy team has forced him to play more power forward than guard.

Bey excelled in this new role, and may permanently make the switch to forward in the coming seasons.

Bey’s offense is the most eye-catching part of his game, as his hops and speed make him a dynamic alley-oop threat.

We’ve seen Bey’s dunks in games. There’s no doubt his dunks in warmups and after the whistles have left fans wanting more.

In addition to Bey, Siewert has also come along nicely this year, besting nearly every stat he posted in his freshman season.

Although he‘s listed at 6-foot-10, he is proving to be an excellent shooter from mid to long range for his size.

Observers of Colorado basketball now know he can stretch opposing bigs out to the three-point line, and is also effective shooting off of screens.

In the same 10-game hot streak in which Siewert has scored in double digits seven times, he’s shot a blistering 53 percent from beyond the arc, including four threes in the Stanford game in which he scored a season-high 17 points.

Siewert’s shooting is definitely his greatest asset, but in order to avoid becoming the stereotypical “big guy that only shoots threes” he might need to shore up some of his defensive skills to use his size more effectively in the paint.

Walton is similar to Siewert in that he is a skilled shooter, especially off screens, as the 7-footer has a similar shooting stroke to Siewert.

Walton’s best game was definitely the Arizona upset, where he played a key role in the victory, shooting a perfect 7-for-7 from the field en route to a big midseason Buffs win.

While Walton might be off the hook in the defending category considering he’s the only player on the team averaging more than a block per game, both Siewert and Walton could use some work on the boards and could still get tougher and stronger.

Walton and Siewert are lackluster rebounders for their size, as they average 3.4 and 3.0 RPG, respectively.

Both averaged less rebounds per game than Miller-Stewart, who played his game before Thanksgiving, but still averages 4.7 RPG on the season.

Both players need to become more of a force in the paint, as their size combined with some physicality could make them great rebounders and even better interior scorers.

Luckily, Walton is just a freshman, and Siewert just a sophomore, so they have plenty of time to hit the weight room as well as hone their skills on the court.

Miller-Stewart is planning on pursuing a graduate transfer in the coming months, meaning he most likely won’t be rejoining the Buffs for a fifth season.

This means these young big men are the future, and that they’ll have to compete with one another for starts and playing time.

Throw Battey in the mix next year as well and there’s no doubt the Buffs will have some potent inside threats in the starting lineup as well as coming off the bench.

A new generation of big men is stepping into the spotlight for the Buffs, their coming out party expedited by the unfortunate injury to Miller-Stewart.

It seems as if head coach Tad Boyle is bidding farewell to more traditional, rebounding, post-scoring big men like Josh Scott and Miller-Stewart, and replacing them with a new breed of big men focused more on shooting, speed and athleticism.