Colorado vs. Arizona: Likely a do or die game for the Buffs 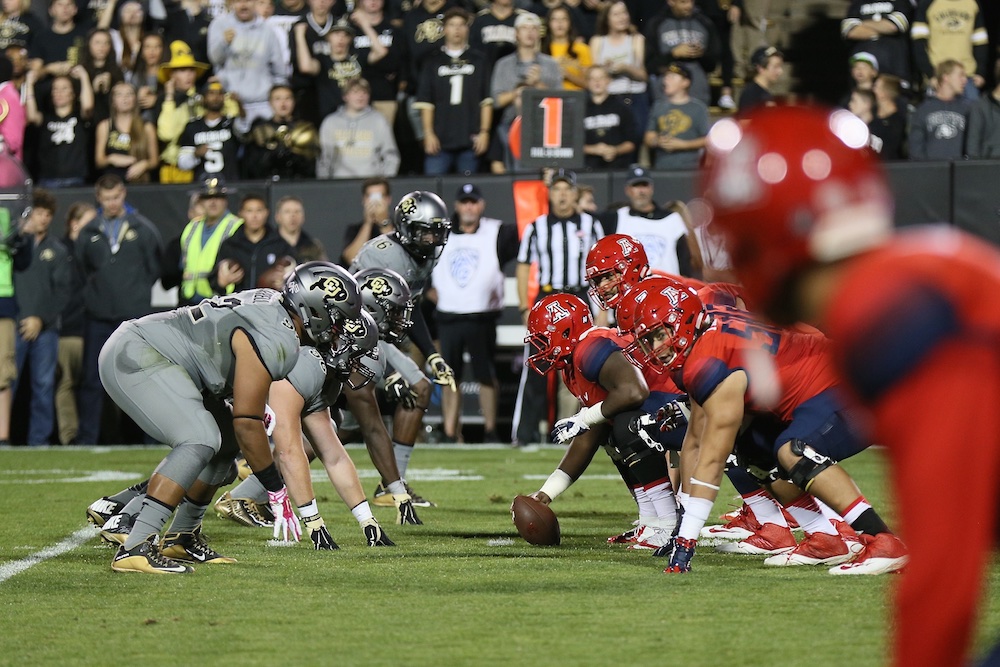 The Colorado Buffaloes and the Arizona Wildcats line up prior to the snap of the first Wildcat possession of the game. Oct. 18, 2015. (Nigel Amstock/CU Independent File)

The Colorado Buffaloes won’t soon forget what happened last Saturday against the Oregon State Beavers. It will go down as the worst loss in the Mike MacIntyre era for the Buffs — at least up until this point.

As a matter of fact, it may be one of the worst losses in Colorado history, tying the biggest blown lead in the school’s 128-year program history.

After leading 31-3 with just over 24 minutes left in the game against the Beavers, the Buffs blew a 28-point lead and fell in overtime by a final score of 41-34.

The loss is especially tragic given the fact that Oregon State hadn’t won on the road since the last time they visited Folsom Field during the 2014 season, dragging what was a 22-game losing streak with them entering Boulder last Saturday.

In light of the recent events, the Buffs held a players-only meeting early this week to discuss the good, the bad and the especially ugly of this three-game losing streak.

“I think it was a great thing,” said junior quarterback Steven Montez. “There was a lot of good things said in that meeting… they said what they thought was going on and how we could fix it [and] how we could get back on track.”

The general feeling in the locker room was that this team needed to take a serious, long look in the mirror and find out what needs to happen next. That’s what the players-only meeting was about.

“It brought us closer together as a group,” added sophomore inside linebacker Nate Landman. “We developed some goals of what we wanted to accomplish for [the rest of] the year and what it was going to take to accomplish those goals.”

When asked to share what those goals were, Landman revealed some lofty ambitions for the team.

Just three weeks ago, when the Buffs were one of the hottest teams in the nation and flying with a 5-0 record, that all seemed very attainable. Now, dropping three winnable games back-to-back-to-back, those dreams seem to be quickly fading in the rearview mirror.

Now sitting at 5-3, the Buffs’ schedule from here on out won’t make attaining any of those goals any easier.

Though Arizona sits at 4-5 on the season, the Wildcats are a team not to be overlooked — nor should any team at this point if you’re the Buffs (see: Oregon State). The Wildcats boast plenty of offensive weapons that the Buffs defense must try to contain, namely junior quarterback Khalil Tate.

That name may sound very familiar to Buffs fans, probably painfully so. Last season, when the Wildcats came to Colorado, Arizona’s starting quarterback was injured on the game’s opening drive, which is when Tate took over. After his performance against the Buffs, he’s been the starter ever since.

Tate threw for 154 yards and a touchdown while completing 12-of-13 passes. But it wasn’t the quarterback’s arm that did the damage to Colorado’s defense, no, it was his feet. Tate ran for an FBS-record 327 yards and added four touchdowns on the ground, accounting for almost 500 yards of offense on his own en route to 45-42 victory over the Buffaloes.

“We all vividly remember him running wild against us, there’s no doubt about it,” said coach MacIntyre. “When I turned on the tape and saw No. 14, I definitely had nightmares when I was watching it… he’s a great athlete.”

It’s never easy for an opposing defense when a quarterback is able to both throw the ball well and efficiently run when pressured.

“He’s an athletic quarterback, he makes a lot of plays with his feet,” added Landman. “Last year he killed us with his feet [and] we’ve been watching film on that. I still think he has that athletic ability.”

Tate and the rest of Arizona’s offense will be a force to be reckoned with. The Wildcats are the most productive offensive team in the Pac-12, tallying up 3,975 total yards, also good for 13th best in the whole FBS.

They also own the Pac-12’s best rushing team, gaining 1,848 yards on the ground, led by sophomore running back J.J. Taylor. Though he stands at just 5-foot-6, Taylor runs a pretty big game. He’s just five yards behind Oregon State’s Jermar Jefferson for the Pac-12 lead with 1,034 rushing yards, also good for fourth-most in the FBS.

“He’s one of the hardest backs I’ve seen on tape,” said Landman, whose job it will be to try and stop the rushing attack of both Tate and Taylor. “He doesn’t really get stopped and he gets a lot of yards after contact. He’s quick on his feet, he [uses] a lot of cuts and he’s got pretty good speed too.”

With the offensive output that Arizona is capable of, snapping the Buffs’ three-game losing skid certainly won’t be easy. The disappointment — to put it lightly — against Oregon State last week will also certainly loom in the backs of players’ minds, though they claim they’re all more than ready to move on.

“These were two of our best practices, to me, as an offense,” said sophomore receiver K.D. Nixon. “We had a meeting that was not only about us talking but it was real, everybody was [open]… it wasn’t let’s argue with each other, it was let’s [talk] and go do our business.”

As a defense, it’s a similar mentality. Colorado feels ready to go.

“Everybody’s been focused, it’s been a new attitude,” said Landman. “What happened last week was tough but I think we’re wanting to forget that and move on and I think this week we’re going to have a great game.”

It will be a short week of practice and preparation as the Buffs travel to Tucson, Arizona to take on the Wildcats on Friday night. With just four games left in the season, Colorado needs to win at least one more in order to be eligible for a post-season bowl game.

What goals seemed so easy to reach just a few weeks ago now seem more like a daunting challenge, as the Buffs limp toward the finish line. Let’s just hope they have at least one game left in them.