Six Picks: Colorado versus No. 11 USC 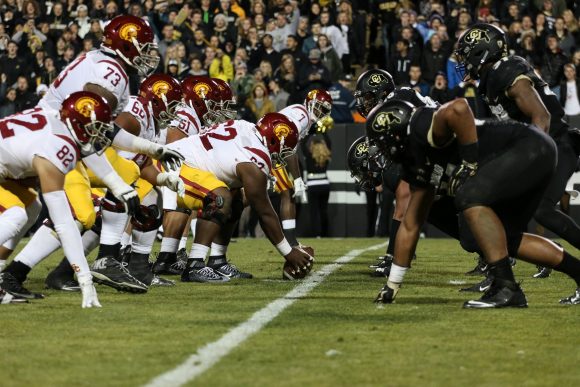 The Buffs faced off with the Trojans at Folsom Field on Nov. 13th, 2015. (Will McKay/CU Independent)

In preparation for Saturday’s matchup between the Colorado Buffaloes and the No. 11 USC Trojans, the CU Independent sports staff gives their predictions of the game.

Drew Sharek, sports staff writer:  USC is a 13.5 point favorite this weekend against the Buffs. What a surprise!

The Trojans, despite losing badly to Notre Dame a couple weeks ago, are still the cream of the crop in the Pac-12 South Division. And for good reason. They lead the conference in sacks. Junior defensive end Rasheem Green who leads the Pac-12 in sacks per game.

He’s supported by more high-caliber defensive players. Junior cornerback Iman Marshall and junior linebacker Cameron Smith are two of the most dynamic players in the entire conference. They did an excellent job in containing Arizona quarterback Khalil Tate last Saturday.

USC sophomore quarterback Sam Darnold is one of the best quarterbacks in the nation. He has a great arm and great poise, throwing for 286.9 yards per game with a 64 percent completion rate. But he’s turned the ball over in 11 straight games.

He’s well complimented by a great running back in Ronald Jones II, who’s averaging 120 yards per game on the ground and has great receivers around him. Senior Steven Mitchell and junior Deontay Burnett are going to be lethal matchups for this Colorado secondary as junior cornerback Isaiah Oliver is likely out. They also have to contest with junior tight end Tyler Petite who is arguably the best in the conference.

The big key for this Colorado team will be for its secondary to cause chaos. Safeties Afolabi Laguda and Evan Worthington will need to watch Darnold’s eyes for a good portion of this game and provide help for both cornerbacks Dante Wigley and Trey Udoffia when they’re in man-to-man coverage. The only way to rattle Darnold is to make plays in the secondary.

In terms of what the Buffs need to do offensively, they just need to stick to the same game plan they’ve ran for the past two weeks. That’s by giving the rock to senior tailback Phillip Lindsay a considerate amount and taking more of the pressure off sophomore quarterback Steven Montez, who’s played very well as of late. The heartbreaking loss to Arizona State may be what fuels this team Saturday night.

That said, it wouldn’t hurt to take USC to cover this game, even on the road at high altitude.

Jack Stern, sports staff writer:  Against a talented Trojans defense, Colorado’s offense could be in for a rude awakening. Led by linebacker Cam Smith in the middle, and talented defensive backs Marshall and Jack Jones, the Buffs might struggle to move the ball consistently.

Expect Lindsay to once against yield a heavy workload. But behind a banged up offensive line that recently lost Tim Lynott to a season-ending torn ACL, Lindsay having the same level of success he’s had against the likes of Arizona and Oregon State seems improbable.

The Trojans should get enough penetration upfront to keep Lindsay’s production to a minimum. Don’t be surprised if Lindsay has to bite and claw for every inch on Saturday. He’ll get his fair share of carries but it may not be enough for the Buffaloes.

USC’s offense is loaded with some of the best players in the country. At quarterback, Darnold projects to be a first-round pick in this year’s NFL Draft, should he decide to declare.

The Trojans can put this one away early by running the ball, something that the Buffs have looked lousy against all year. The Trojans will likely pound the ball right at the core of the Buffs’ defensive line early and often, putting pressure on CU’s front seven. Jones is averaging an alarming 6.8 yards per carry this year and at this point the Buffs’ defense looks like a juicy steak that he’s more than ready to cut up.

Zoe Collins Rath, sports staff writer: The Trojans have played very well this season and with the exception of a big loss to Notre Dame (their other loss to Washington State was close). But last weekend against Arizona their running game looked the strongest it has ever been

USC’s junior running back, Ronald Jones II, had a strong game against Arizona. The Trojans had fewer passing attempts and just let him run the ball, which is different than what they normally do. But the change of pace worked. Throughout the game, USC’s rushing attack took control.

The Buffs are going to have their work cut out for them on Saturday. USC is coming to Boulder with a strong running game. Colorado’s defensive line has looked shaky. The front seven has had trouble against the run as a unit and the Buffs’ secondary is far from healthy.
Lindsay will need to be at his best on Saturday. This year, he has always provided a spark to Colorado’s offense and he’ll no doubt look to do so against the Trojans. Whether it will matter remains to be seen. This one seems like it has the potential to get ugly.
Final Score: USC 49, Colorado 14

Kyle Rini, assistant sports editor: The good news for Colorado is that its offense is back on track. After finding their footing against Cal, the Buffs are finally looking like the playmakers we expected them to be. In particular, Montez has finally started stepping up in the pocket and delivering deep strikes to his receivers. If said receivers could just hold onto the ball, CU would have a competent passing attack to complement Lindsay’s continued production.

The bad news is USC has one of the better defenses in the conference. Lindsay and a revitalized Montez might not be enough to overcome the Trojans, who rank fifth in the conference in total defense. USC is slightly weaker against the run, so expect Lindsay to once again be the workhorse for the Buffs.

On the other side of the ball, Colorado’s pass defense has continued to play just well enough. Without star cornerback Isaiah Oliver, the secondary held its own against Manny Wilkins and the Sun Devil pass attack on Saturday. Even the two touchdowns Wilkins threw on the Buffs were pretty well defended — the receivers just made incredible plays on the ball.

If the secondary continues to play well, they should put up a fight against Darnold, who has had a penchant for throwing picks this season.

But even in a best-case scenario where the secondary somehow shuts down Darnold, the CU run defense has proved too poor to handle a Pac-12 rushing attack. Jones II should have a field day against the Buffs, who are averaging 199.3 yards surrendered on the ground per game.

Wilkins and the Arizona State running backs steamrolled the Buffs for 381 yards and the win. I expect the Trojans do similar things, despite Darnold being less mobile than Wilkins.

The day will come when the Buffaloes finally take down the Trojans. It just won’t be this Saturday.

Alex Pepper, sports staff writer: The Buffaloes dropped the ball last week against Arizona State — quite literally. Two dropped passes that would have been sure touchdowns in the first half came back to haunt the Buffs, as they would go on to lose 41-30 in Tempe.

CU let ASU running back Demario Richard torch them for nearly eight yards a carry. The tailback tallied 189 yards on the ground and added a touchdown that tied the game in the fourth quarter. Richard wasn’t the only problem for the defense, as quarterback Manny Wilkins nearly reached the 100-yard mark and added a score of his own. In total, the Sun Devils scorched the Buffaloes on the ground

Montez has shown increased accuracy and confidence in throwing down the field. Drops have plagued the Buffaloes’ wide receiving corps this year. The Buffs’ wideouts need to help out their young quarterback when he drops it neatly in the breadbasket for them.

Looking ahead to USC, the Buffs should be sweating. CU has struggled against Pac-12 teams this season, with a 2-5 record in conference. Now Colorado faces a No. 11 ranked USC team that has scored 48 or more points in their last three games.

The Trojans have found their stride, as Darnold and Jones II lead the charge on offense. What may surprise people is that Darnold has thrown more interceptions on the season than Montez, so the Buffs will have to capitalize if Darnold gives them a gift.

The Buffaloes have been outscored by ranked opponents 65-10 this season, so I see them having problems against a surging USC offense loaded with star power.

While I don’t think they get blanked like they did against a ranked Washington State team, I don’t think an upset is in the making here. I think the Trojans take this one comfortably.

Justin Guerriero, head sports editor: It seems all but impossible that the Buffaloes are capable of taking down Southern California on Saturday.

The Buffs were already going to have trouble containing Jones II. With Oliver unlikely to play for CU Saturday, and with the probable loss of senior defensive back Ryan Moeller, the Buffaloes should be worried about Darnold picking them apart through the air.

Further adding to Colorado’s woes is the team’s year-long issue of pressuring enemy quarterbacks. Darnold is not the ground threat that Wilkins or Tate was, but he should have no issues finding his men downfield. His passing pocket should be comfortable.

Colorado’s offense has shown flashes of being what it was hyped up to be heading into the season, but it just won’t not be enough. The laundry list of mismatches that the Buffs are on the short end of seems indicative of the Trojans being able to do whatever they please offensively.

The Buffs will have to be flawless offensively and better than usual defensively to stay competitive with USC. That seems like a lot to ask.