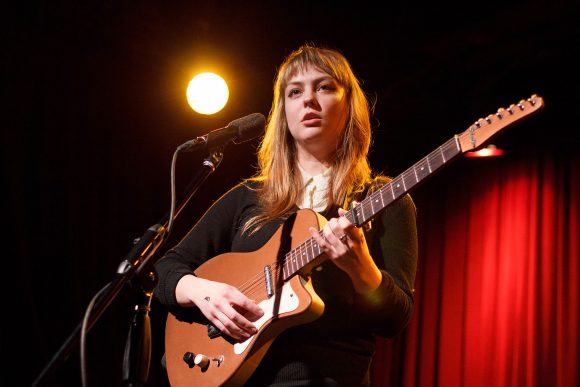 Singer-songwriter Angel Olsen’s latest album “All Mirrors” sees the artist changing in many ways. This is her fifth full-length work and it is pleasantly different from the rest of her catalog.

Olsen has been many things throughout her artistic career: a lonely folk singer, a Will Oldham collaborator, even a cool girl in a glittery wig. After the breakout successes of her 2014 album “Burn Your Fire For No Witness” and the stellar follow-up “NO WOMAN,” Olsen deservedly became one of the most popular voices in indie music. The tenderness of songs like “Unfucktheworld,” and the anthemic choruses of songs like “Never Be Mine” and “Shut Up Kiss Me” resulted in admiration from critics and fans alike.

The songs on “All Mirrors” are much bigger than anything Olsen has made before. They are professionally polished, many featuring huge string arrangements that back her voice. The difference between her first EP “Strange Cacti”, a hauntingly beautiful and diaristic lo-fi work, and this album are stark. On the surface, she could be an entirely different artist, but deeper excavation shows that Olsen’s singular voice remains at the center of all her work.

At the beginning of Olsen’s career, she was often pigeonholed as a melancholy, lonesome, sad girl character who made guitar-and-voice music for likewise melancholy, lonesome people. This was a characterization she resisted heavily, a fact which is reflected in the way she has morphed her sound and persona through the years. She is an artist with a myriad of talents and motivations; an incredible guitarist with an ear for melody and a masterful lyricist. She conjures love, despair and everything in between.

Her voice is the same fragile, yet strong driving force that has always defined her sound. However, on “All Mirrors,” it can sometimes fade into the background. On the tracks “Too Easy” and “Impasse” Olsen gets lost behind the expansive string arrangements. Her voice becomes drenched in reverb and blends too far into the glimmering synths that float through the mix. Her lyrics, which are able to convey big feelings in just a few words, aren’t able to shine through as it is hard to decipher what Olsen is singing.

“All Mirrors” is solitary. Almost all of its songs deal with falling out of love rather than into it. The song “What It Is” builds up to huge, emotive strings that perfectly complement the heavy lyrical themes of the difficulties of loving. The escapism that can be sometimes be tied to romantic relationships is captured perfectly. There are no proclamations of hope or insistence like in “Shut Up Kiss Me,” likely because Olsen has grown as an artist and a person since we last heard from her.

The album closes with “Endgame,” and Olsen’s voice is at near-whisper — breathy and tactile — backed by piano chords that increase slowly in volume. She builds with them, singing about the perils of attachment with the lyrics, “I needed more, needed more than love from you.” The final song “Chance” also features Olsen’s voice front-and-center in the mix. The instrumentation is secondary to the intimate story she tells of despondency and hopelessness after lost love. As the song and the album come to a close, however, she resolves to live in the present and sings, “Forever’s just so far / Why don’t you say you’re with me now / With all of your heart.” She posits optimism in these shapeless, disconnected times and pledges sincerity in the face of anguish.

Despite the occasionally overwhelming and unnecessary instrumentation, Olsen has crafted yet another album that conveys a wide emotional spectrum. It is a dark descent into what might just be a rewarding rebirth. Olsen will be coming to Denver’s Gothic Theater on Dec. 14 and 15. More information and tickets can be found here. A link to a review of last year’s Denver show can also be found here.