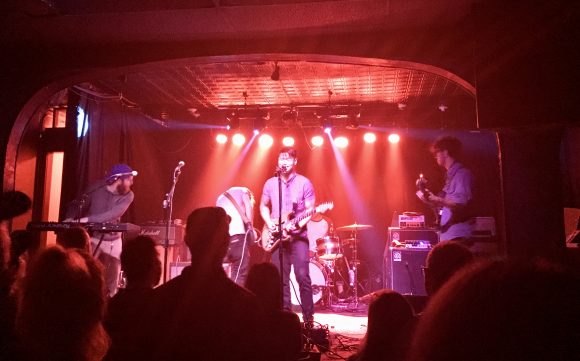 On Oct. 5 Denver’s Globe Hall hosted an evening of rock music. Headliner The Early November was supported by OWEL and Have Mercy. The evening shook down to be a sampler of the varied world of rock.

With re-runs of Simpsons episodes and fashionable rustic high-top tables, Globe Hall’s barbeque-and-bar style would make any millennial salivate at the sight. The venue is a dive but it is cozy. A rectangular room with curtains covering each wall creates a stifling and intimate atmosphere.

Emo rock headliner The Early November came onstage following an opening set by OWEL. The group was dressed in the classic rock uniform of flannel and ripped shirts, and people crammed into the room, eager to hear them play.

The Early November opened with “A Stain on The Carpet,” from their 2012 album “In Currents” to the screams of excited fans. The band’s presence wasn’t overwhelming onstage, and the dark, black-curtained room with amps and merchandise stands shoved into the corner felt big enough to properly appreciate their punchy and exciting energy style of rock.

During the set, lead singer Arthur Enders commented on some newer songs, saying, “To me, ‘Ave Maria’ was the song that was most important, it’s filled with all of my flaws. I’m so glad that it finally came out.” “Ave Maria” has fairly simple instrumentation. It is stripped back and played with only piano and acoustic guitar. By allowing the music to only have a few elements, there is no distraction.

The Early November’s infectious energy is hard to ignore. Throughout the show, the audience continued dancing and singing along. Acoustic arrangements from their new album served as relaxing breaks between heavy rock elements, creating a whirlwind of tempo that left audience members captivated until the end.

Support act OWEL put on an intensive set. The group used unique instrumentation to create original, dreamy soundscapes juxtaposed by the use of a trumpet. OWEL ended their set to a full room with the soft sound of “Snowglobe” from their debut album “OWEL”, which allowed lead vocalist Jay Sakong’s falsetto to contrast the punchy brass of the trumpet.

The evening was brought to a close and The Early November thanked the audience for coming out. The group stuck around after their gig to talk and take pictures with fans. The Early November will be continuing their tour with OWEL and Have Mercy until Oct. 19, visiting cities all over America from Chicago to Detroit.

Find more information about The Early November, Have Mercy and OWEL.