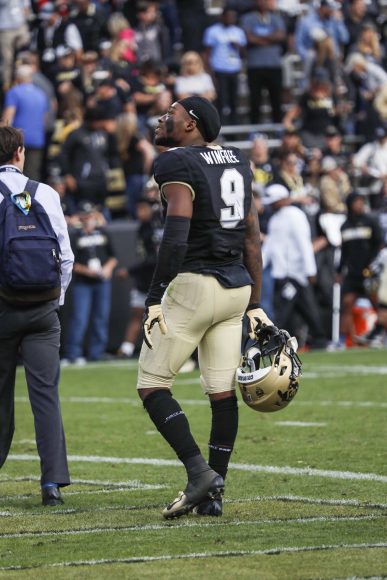 Juwann Winfree walks off the field after the brutal defeat of the Buffaloes by Oregon State. Oct. 27, 2018. (Fiona Matson/CU Independent)

On Saturday, the Colorado Buffaloes played host to the to the worst team in the Pac-12 Conference, the Oregon State Beavers, hoping to emerge victorious and end a two-game losing streak.

For two straight games leading up to the showdown with OSU, Colorado’s offense suffered from crippling episodes of stagnation, its secondary had proved to be vulnerable and the offensive line had played less than spectacularly.

In a perfect world, Colorado would have used Saturday’s game against the lowly Beavers,  – who have scored the fewest and allowed the most points within the entire Pac-12 – as a time to iron out some kinks and beat up on an inferior team in the hopes of gaining some confidence.

Instead, all of the aforementioned issues plaguing the Buffs were visible, albeit in different capacities and at different times. At one point Colorado led 31-3 early in the third quarter, but in the final half and overtime period the Buffaloes were completely outpaced.

Heading into the game at Colorado, the Beavers had lost 22 straight road games dating back to 2014. The last time they won away from Corvallis ironically was in Boulder on Oct. 4, 2014, as OSU defeated CU 36-31 in that game. 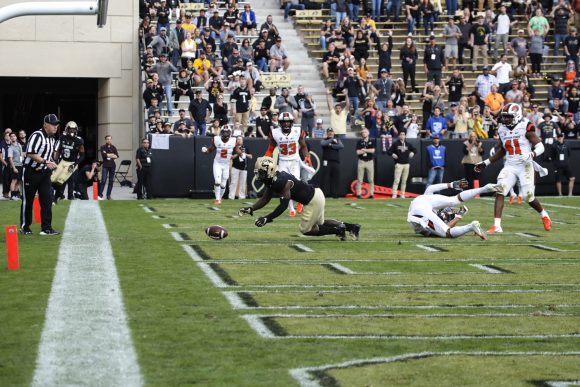 “It’s an extremely bad loss, no doubt about it,” said head coach Mike MacIntyre. “We should have won because we were up. We should have put it away but we didn’t.”

In some ways, the writing was on the wall for the Buffaloes. Colorado began the game with three straight three-and-outs. Senior tailback Travon McMillian had trouble gaining traction, while junior defensive back Dante Wigley was picked on all afternoon by yet another team.

After losing to USC and Washington, the Buffs were forced to ponder if their potential great season would be relegated to a good season. Losing to Oregon State at home in such a fashion warrants a totally different level of concern and type of conversation regarding the trajectory of this Buffaloes team.

“At one point we were up by a whole lot and it seems as if we kind of got too comfortable,” said senior linebacker Drew Lewis.

The long story short is that Saturday’s loss feels very much like the single greatest calamity in the MacIntyre era. A team that began the season with such promise now must perform a serious amount of damage control in the final four games of the year.

Even as the game slowly degraded, it became increasingly apparent that even if CU held on, Saturday would have been a very hollow victory – certainly not the boost of confidence the team was looking for.

“Defensively, we didn’t come through like we needed to,” MacIntyre said. “[We] definitely should have won the football game, but we didn’t.”

The 536 yards of total offense, six total sacks on the Beavers’ quarterbacks, and a 13-reception, 189-yard day from sophomore wideout KD Nixon weren’t enough to propel the Buffs to a much-needed win. The ramifications of such a blown opportunity will become more clear in the weeks to come.

The Buffaloes got on the board first, drawing first blood on a 32-yard touchdown connection between Nixon and junior quarterback Steven Montez. OSU answered with a field goal early in the second quarter, but after that, the Buffs took control in the game.

Wigley picked off Oregon State quarterback Jack Colletto and returned the ball 27 yards for a touchdown. After another fruitless offensive possession by the Beavers on their ensuing drive, the Buffs got another touchdown, again from Montez to Nixon, this time for a 7-yard score. 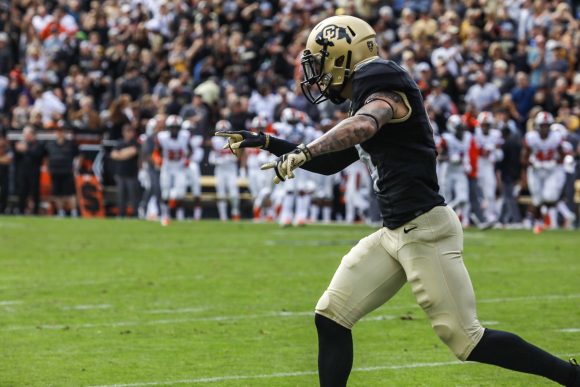 Defensive back Dante Wigley runs around the field to celebrate the lead that the Buffaloes had in the second quarter. Oct. 27, 2018. (Fiona Matson/CU Independent)

The Buffaloes took a 24-3 lead going into halftime and on the first play of the third quarter, McMillian burst out of the backfield en route to a 75-yard touchdown run, eventually putting CU up, 31-3.

At that moment in the game, things progressively went from bad to worse to disastrous for Colorado. Oregon State’s spark in the second half came in the form of a quarterback switch. Colletto was benched in favor of Jake Luton and it likely won the Beavers the game.

Luton finished with three touchdowns, completing 28 of 39 passes for 310 yards.

Perhaps the turning point was early in the fourth quarter. Colorado still led comfortably, 31-17. But facing a 4th-and-1 from the OSU 43-yard line and hoping to score some insurance points, the Beavers’ defense denied McMillian on a rush up the middle and took the ball back.

OSU got a field goal out of the solid defensive stand, but trailed, 30-21. Colorado’s ensuing possession did a whole lot of nothing, as CU gained four yards on three plays and quickly punted the ball back to Oregon State.

The Beavers didn’t waste the opportunity. Using just 82 seconds, they marched downfield and got another touchdown, coming within three points of the Buffs.

But shortly thereafter, Buffs’ freshman placekicker Evan Price gave the team some breathing room, nailing a 34-yard field goal, giving Colorado a 34-28 lead with just 2:05 left on the clock for the Beavers’ offense to work with.

Colorado sophomore defensive back Trey Udoffia cost the team big time on that final drive, where he was slapped with two 15-yard penalties, the first being a blatant late hit resulting in a personal foul call and on the very next play, a pass interference call.

He was tied for the lead on the team with sophomore linebacker Nate Landman with 10 tackles.

Ultimately, the Beavers were able to tie the game in the waning minutes, but the Buffs managed to block OSU’s extra point attempt. Had it been made, it would have given the Beavers a 35-34 lead with just 23 seconds left to play.

Colorado’s offense did manage to get to OSU’s 36-yard line in a few seconds, setting up Price for a 53-yard field goal attempt, but it did not find the uprights and an overtime period began.

Oregon State, beginning from CU’s 25-yard line, took nine plays, but ultimately scored a touchdown on its first and lone OT possession. The Buffs got the ball back in a touchdown or die situation.

Although Montez found senior wide receiver Jay MacIntyre for a 21-yard gain, setting the Buffs up at the Beavers’ 7-yard line, the Buffs were unable to find the endzone.

The most painful play of the drive came on 3rd and 7. Montez tried to hit Nixon on a slant in the middle of the endzone but the ball was slightly off target, bouncing off of Nixon’s hands.

“Oregon State had more energy than us out there,” McMillian said after the game.

Nixon was particularly hard on himself after time expired.

MacIntyre and his Buffs will need to be firing on all cylinders this weekend as the team travels to Tucson, Ariz. for a matchup with the University of Arizona Wildcats. Kickoff is at 8:30 p.m. this Friday, Nov. 2. 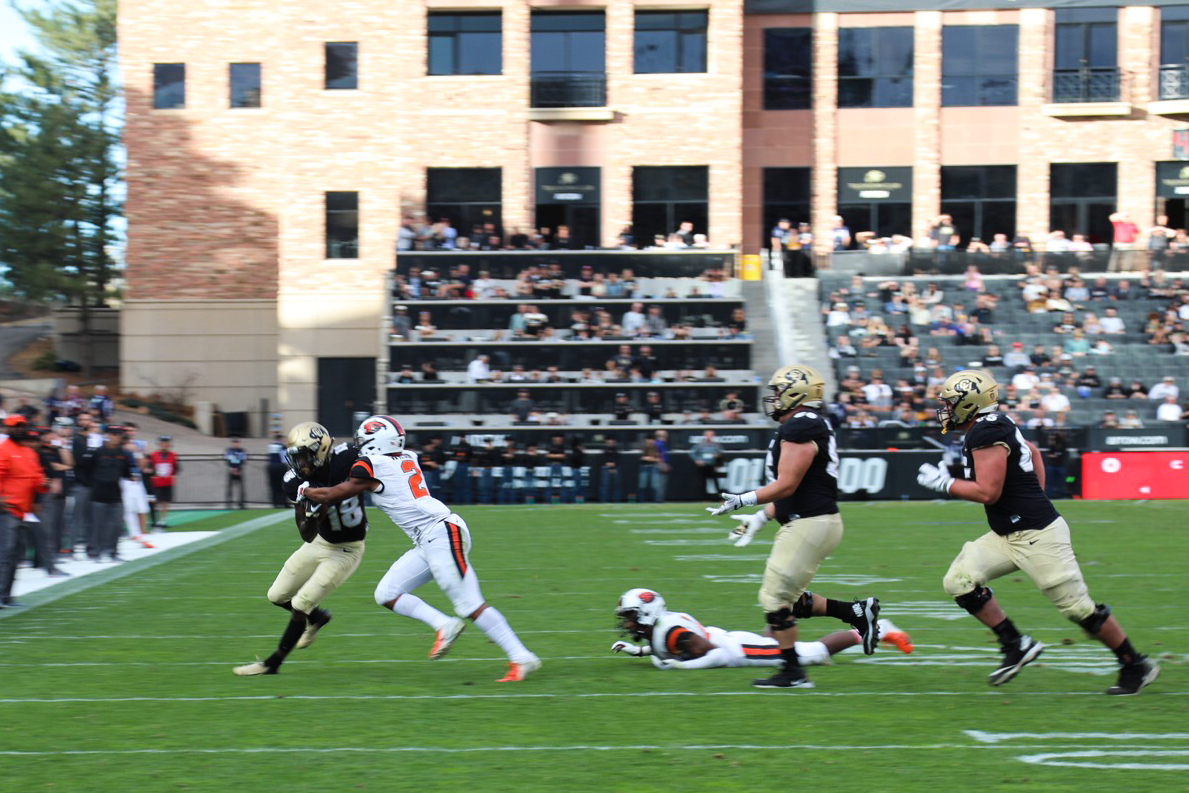 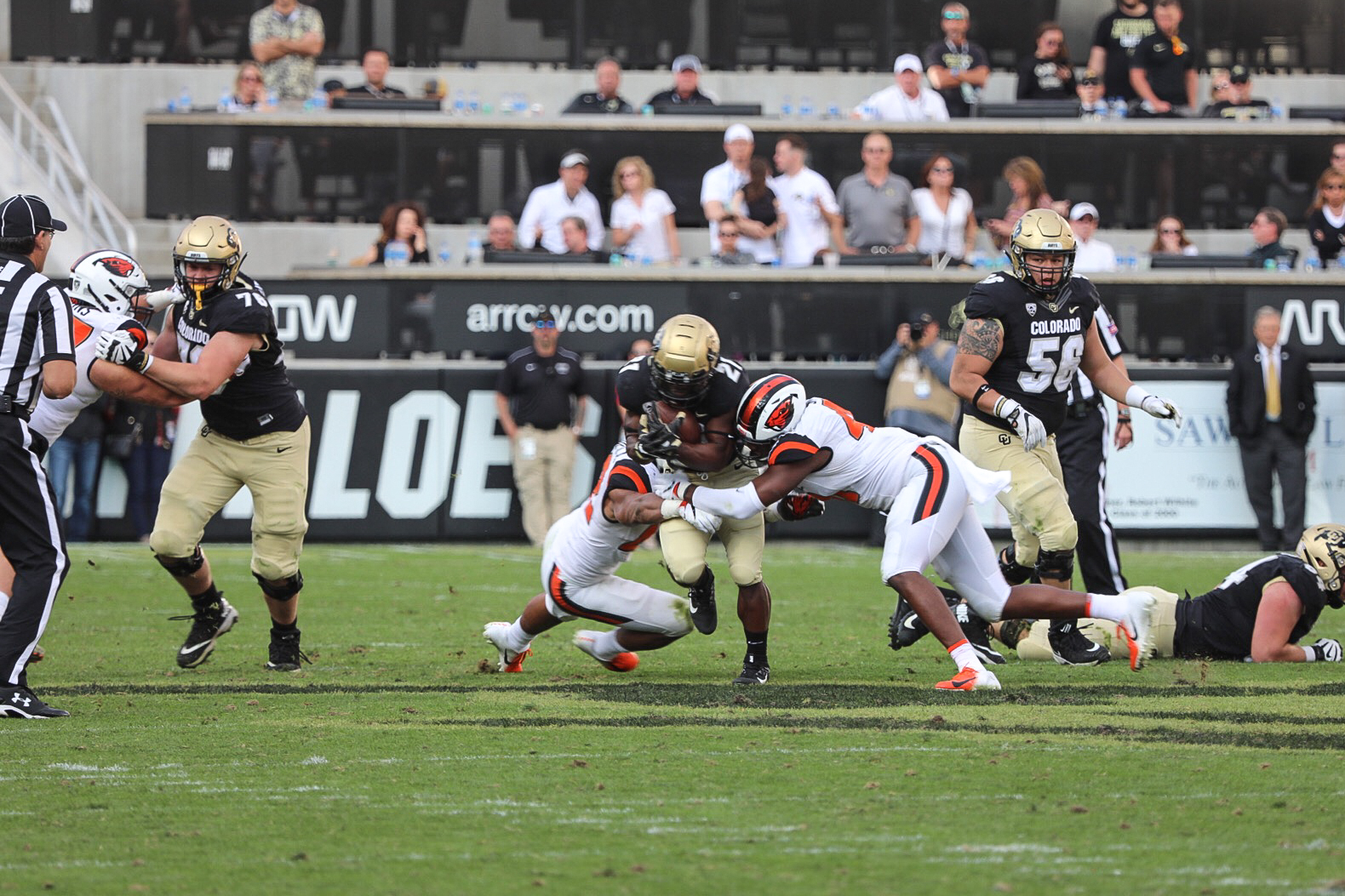 The Buffaloes had a strong lead in the beginning of the game against OSU. Oct. 27, 2018. (Fiona Matson/CU Independent) 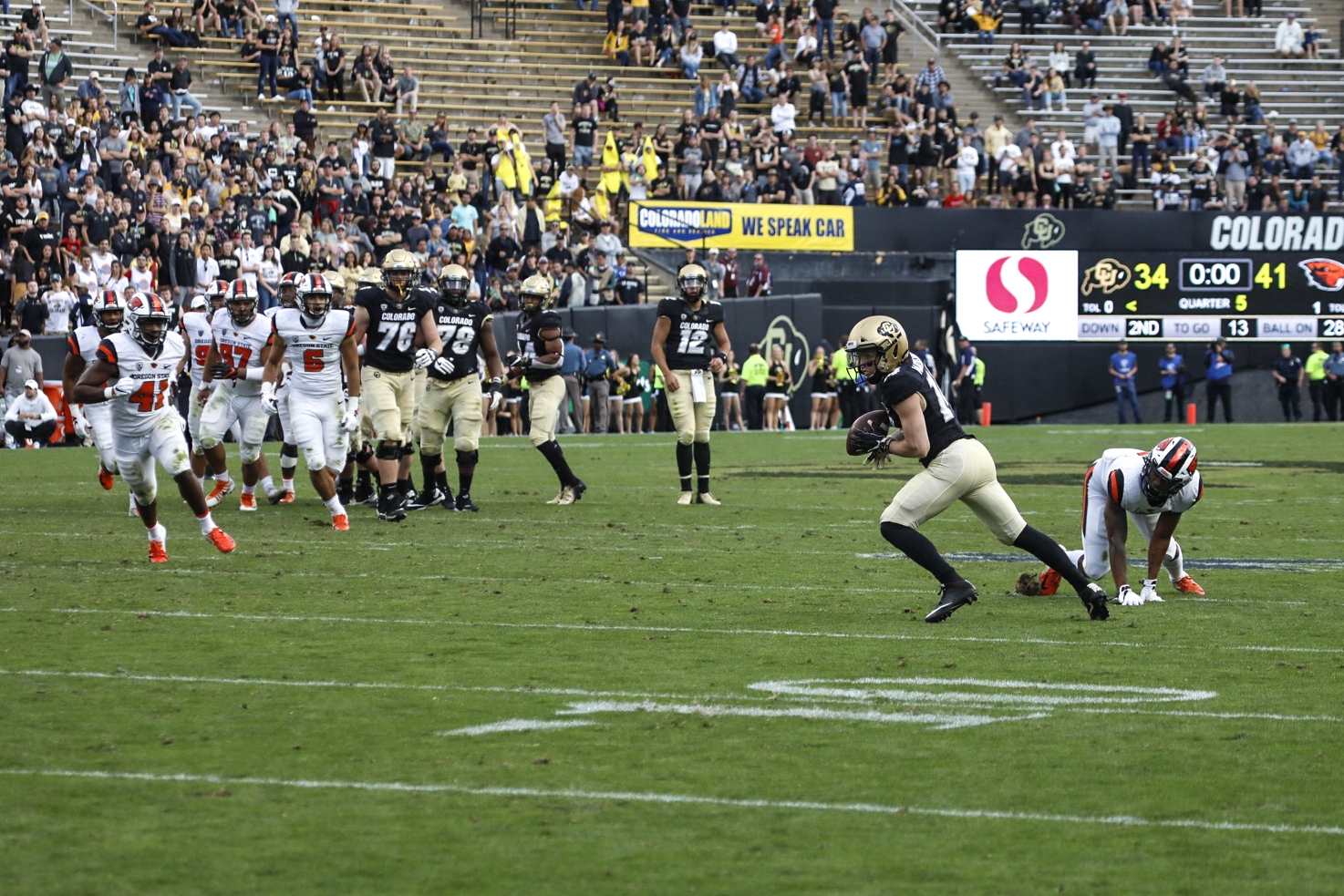 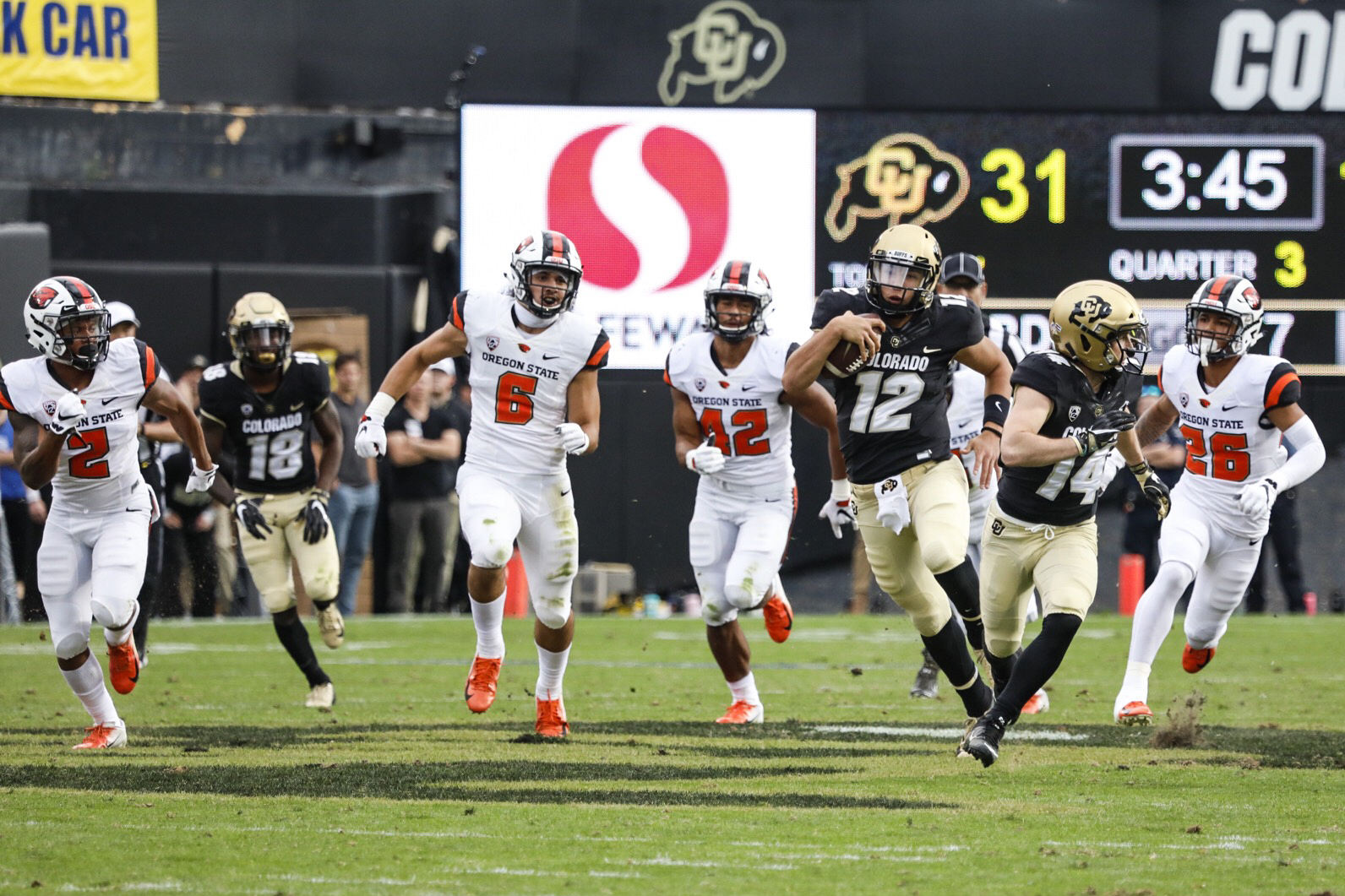 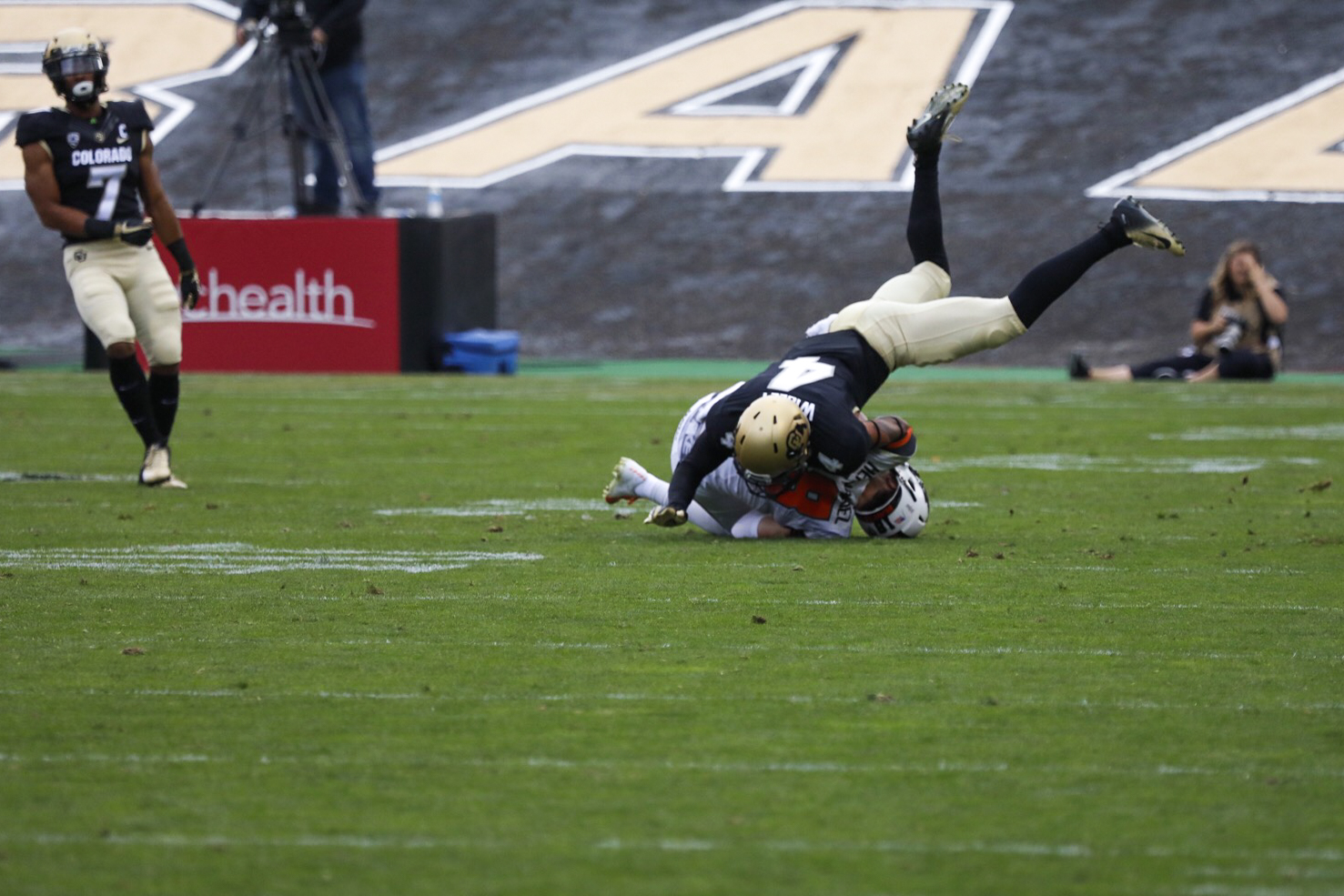 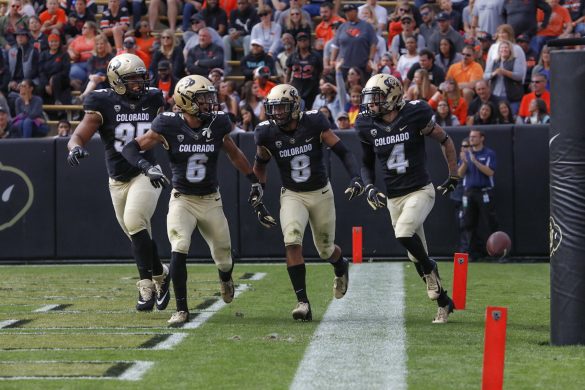