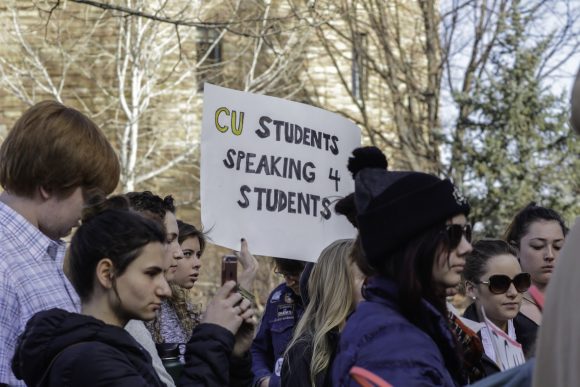 A protester holds up a sign during the BuffsUnited student walkout. March 14, 2018. (Bri Barnum/CU Independent)

On Oct. 5, 2016, Erin Baptiste was in the middle of a history lecture in the Gold Biosciences building when a CU alert went out to everyone saying that there was an armed man in the Champions Center just a short way away. The professor halted the lecture and said they and the TAs were going to stand by the lecture hall doors and keep watch.

At that point, Baptiste said, “a kid stood up and said ‘hey I have a firearm, I’ll stand at the door with you and make sure no one gets hurt.’”

Baptiste said she was surprised someone had a gun in class. She said it made her feel a little safer in the moment, but in general, knowing that students can have concealed weapons on campus makes her nervous.

“I don’t like the idea of not knowing who had firearms on campus,” she said.

In the University of Colorado system, it is legal for faculty and staff to carry concealed weapons on campus as long as they have a permit. The university used to have a ban on guns on campus, but it was overturned in 2012 by the Colorado Supreme Court for violating the state’s Concealed Carry Act.

Open carry and concealed carry is legal in most of Colorado except certain jurisdictions (open carry is banned in Denver, as are assault weapons). A study from Columbia University found that about 34 percent of Coloradans own a gun.

CU students have mixed feelings about guns on campus. A number of students the CUI spoke to said that they were not even aware it was legal to have concealed weapons on campus, others said guns on campus made them feel unsafe.

“It is definitely something that caught me by surprise, I thought guns were not allowed on any school property,” said junior Jonathan Santistevan. He said he doesn’t think assault rifles should be allowed to be purchased by the public and doesn’t see any use for them outside of combat.

“I think gun ownership, voting, military service, alcohol consumption, gambling etc. should either be all at 18 or 21,” he said. Estrada said that knowing people can have concealed weapons at CU makes him feel less safe, he thinks police are the only ones who should be allowed to have guns on campus.

Freshman Nina Ryan said the law has been a topic of controversy in her residence hall, with students debating whether or not guns should be allowed on campus. For her, the fact that students can have weapons on campus is “unbelievable.”

“With school shootings occurring so often I just feel like having those weapons on campus makes the risk higher,” Ryan said.

Graduate student Sarah Zanolini said that she is pro-Second Amendment but thinks there needs to be some restrictions on gun ownership, including an assault weapons ban. She said she didn’t originally think there should be restrictions, but the high number of shootings in recent years gradually changed her mind.

“I’m super pro Second-Amendment and people’s ability to self-defend, but I think the assault weapons we have nowadays step far beyond what the original authors of the Constitution had in mind,” Zanolini said.

“I think more people should carry, honestly,” Gorman said. “It’s our God-given right to defend ourselves and a firearm is the best tool to use to get that job done.” He said he doesn’t think current gun laws need to be restricted, officials just need to make sure to enforce them.

Senior Nick Funger shot guns at a range when he was a kid, but said that it doesn’t make sense to him for people to own automatic weapons.

“I’m all for safe gun use, but I think it should be heavily regulated,” Funger said. He said he’s happy to see students across the country taking action to advocate for gun control, and thinks local activism is the way to create change.

In Boulder, students at high schools across the county as well as CU participated in a walkout on the one-month anniversary of the Parkland shooting to advocate for stronger gun control. A larger rally is planned in Denver for March 24.