Students walk out of class in protest against gun violence

Students gathered at the UMC fountains where they then marched to Norlin Quad chanting “enough is enough.” Promoted through the BuffsUnited Facebook page, a coalition of campus groups and individuals organized the walkout.

One of the organizers, Bruno Tapia, said he was “really impressed” by the roughly 200 students and community members who turned out. In other events around Boulder, high school students also walked out of their classes, demanding actions against gun violence. 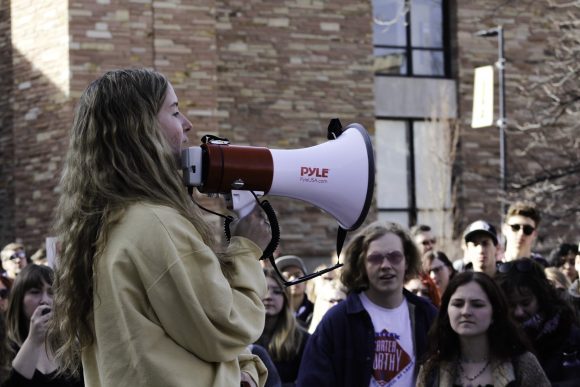 Sophomore Madison Lee Sunshine grew up near Parkland, Florida, where a mass shooting at the town’s Marjory Stoneman Douglas High School took place last month. 17 people were killed when a gunman who had legally purchased an assault rifle opened fire on students, teachers and those in the school.

“When it happened, we were shocked,” Sunshine said.

Sunshine said she felt a positive response from the CU community. One of her professors helped her prepare for the event along with classmates and friends who helped bring the national walkout onto CU’s campus.

Florida native and Sunshine’s friend Cameron Dodich said after the shooting they were looking for a way to be productive.

“We didn’t see anything, so we were like we might as well do this ourselves,” Dodich said. “We couldn’t just sit on Facebook and be upset.”

Annie Wyrick, a member of the gender sexuality center, spoke to the rally crowd. They said they felt it was important to “get as many voices out there as possible.”

“A lot of times minority voices are forgotten in the midsts of these tragedies,” Wyrick said. “Violence affects the LGBT community. In regards to the events of the Orlando shooting, that was the worse hate crime against LGBT in American history.” 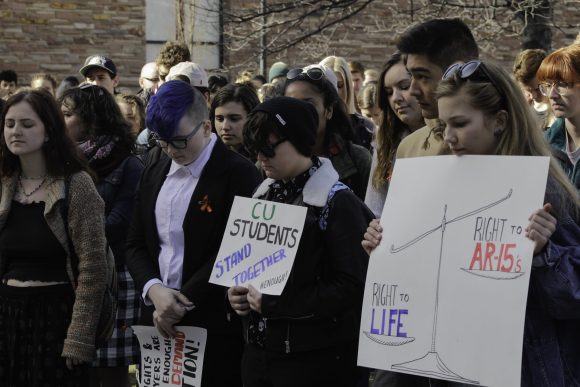 Makena Lambert, a CU sophomore, said the Parkland shooting “really affected my heart.” She also voiced her concern as to what CU does to protect its students from gun violence.

“I’ve noticed that classroom doors don’t lock from the inside,” Lambert said, who sees herself and other students as “sitting ducks.”

Ellery Taylor, a sophomore, said she attended to support all those who have been affected by mass shootings.

“I’m here because of the horrible school shootings that have happened,” Taylor said. “I am a student who’s upset and angry.”

Many students also commented on CU’s conceal carry policies. Sunshine mentioned that CU has tried to ban concealed carry policies in the past.

“It’s the time for CU to try and do it again,” Sunshine said. “There’s always going to be people that are angry but I think our safety is more important.” 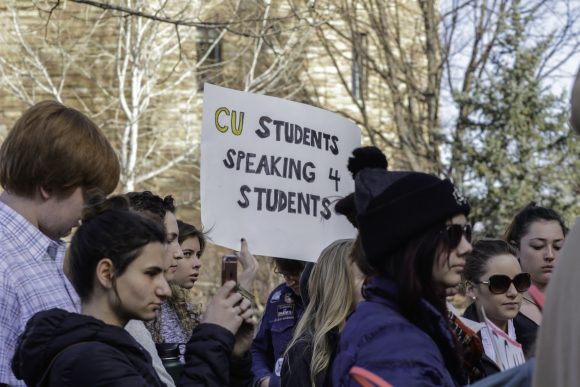 A protester holds up a sign during the BuffsUnited student walkout on March 14, 2018. (Bri Barnum/CU Independent)

Payton Meyer, a sophomore, said that CU has armed personnel who are there to deal with issues and that students should not feel that they need to be armed.

“I don’t see a point for anyone on campus [who’s not an officer] to walk around with a gun,” Meyer said.

Ryan Huff, spokesperson for CU, said that while the school prefers that students don’t miss class, they respect the students’ right to speak out.

“We support our students who want to peacefully act on issues they are passionate about,” Huff said.

Carmen Mabee, another key event organizer, emphasized the importance of students raising their voices. Today’s protests come in advance of the nationwide March For Our Lives next Saturday. 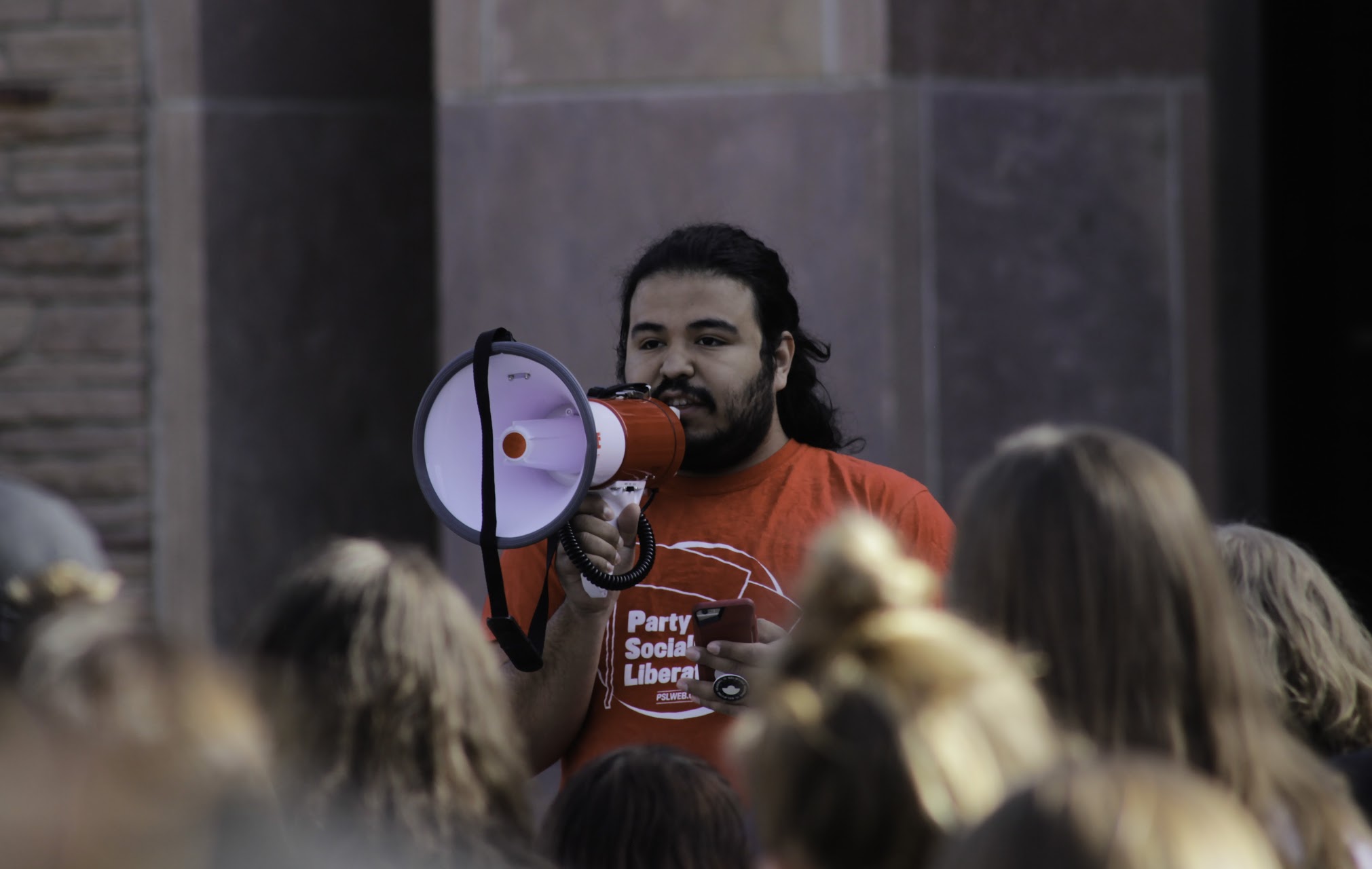 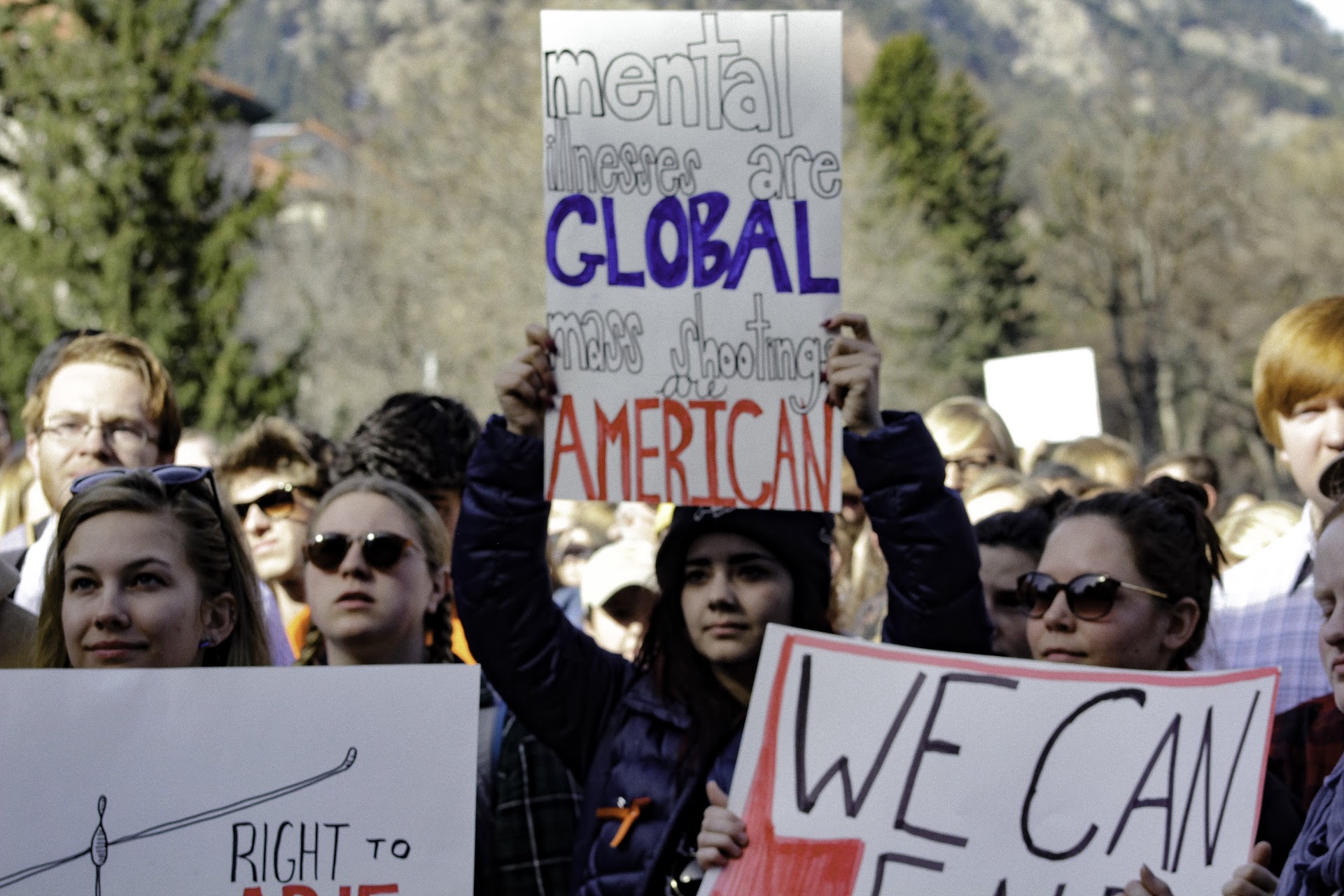 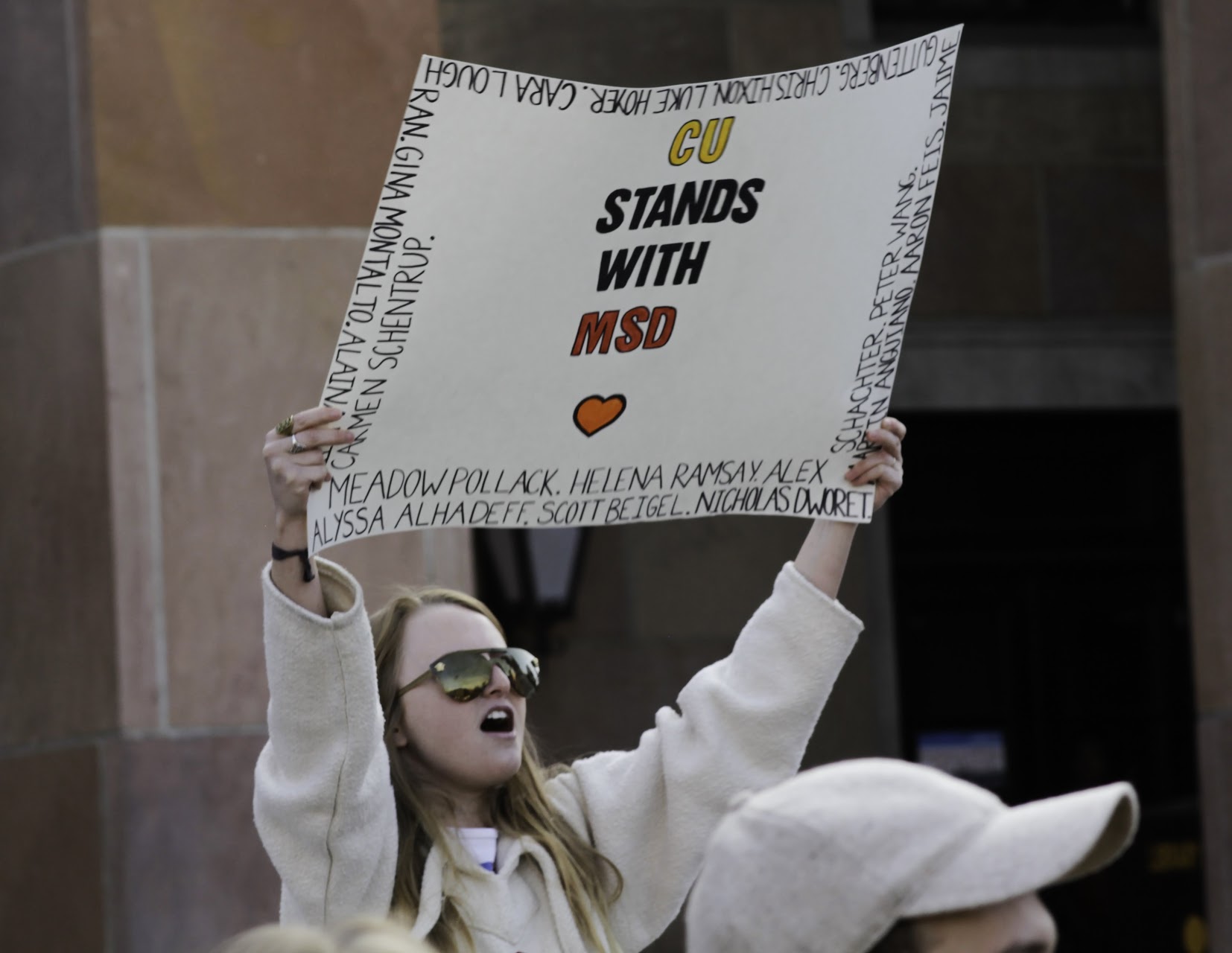 A protester holds up a sign during the BuffsUnited student walkout. March 14, 2018. (Bri Barnum/CU Independent) 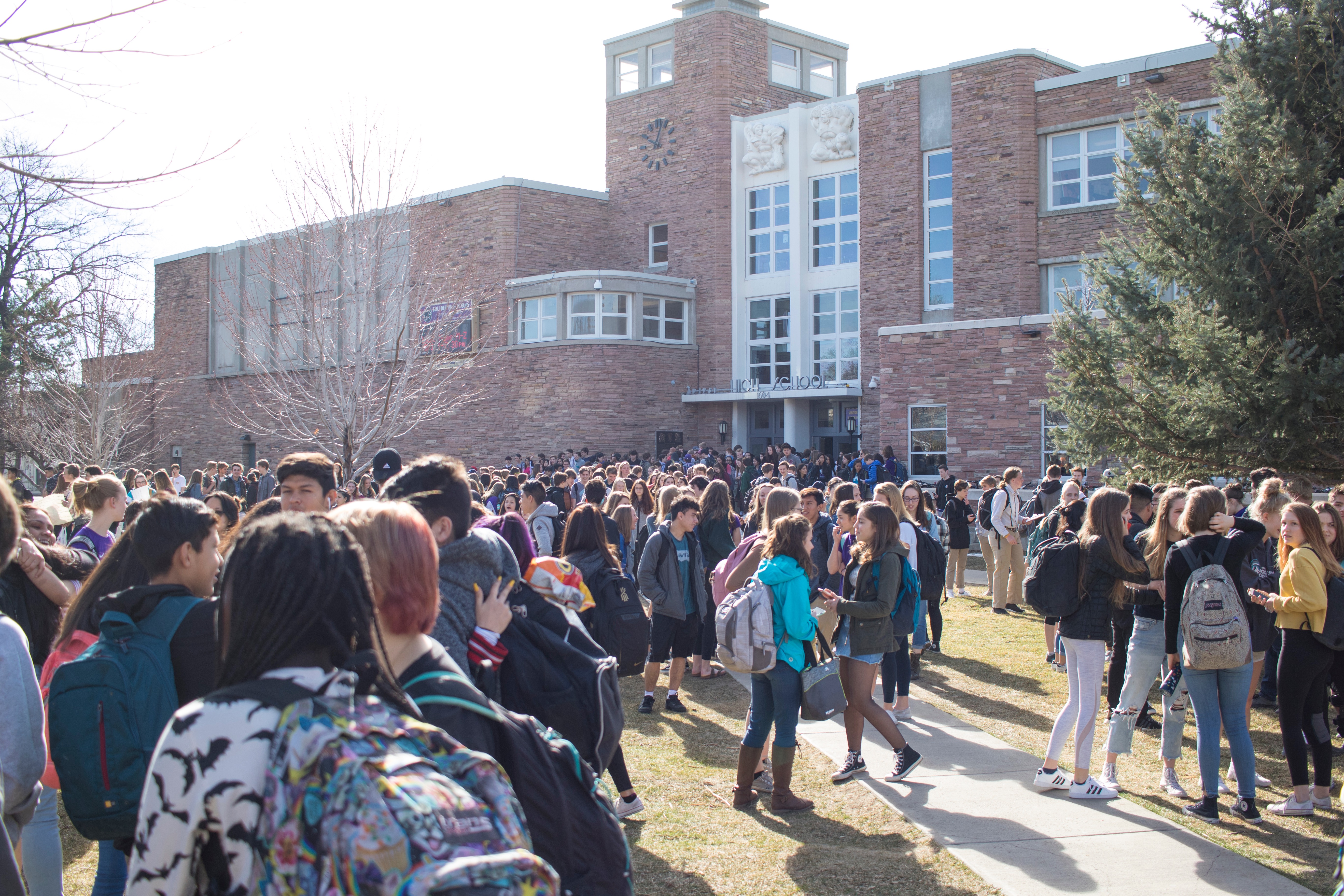 Students walking out of Boulder High School before they went to the feild near the school for 17 minutes of silence to remember the victims of the parkland shooting. March 14, 2018. (Phil McKenzie/CU Independent) 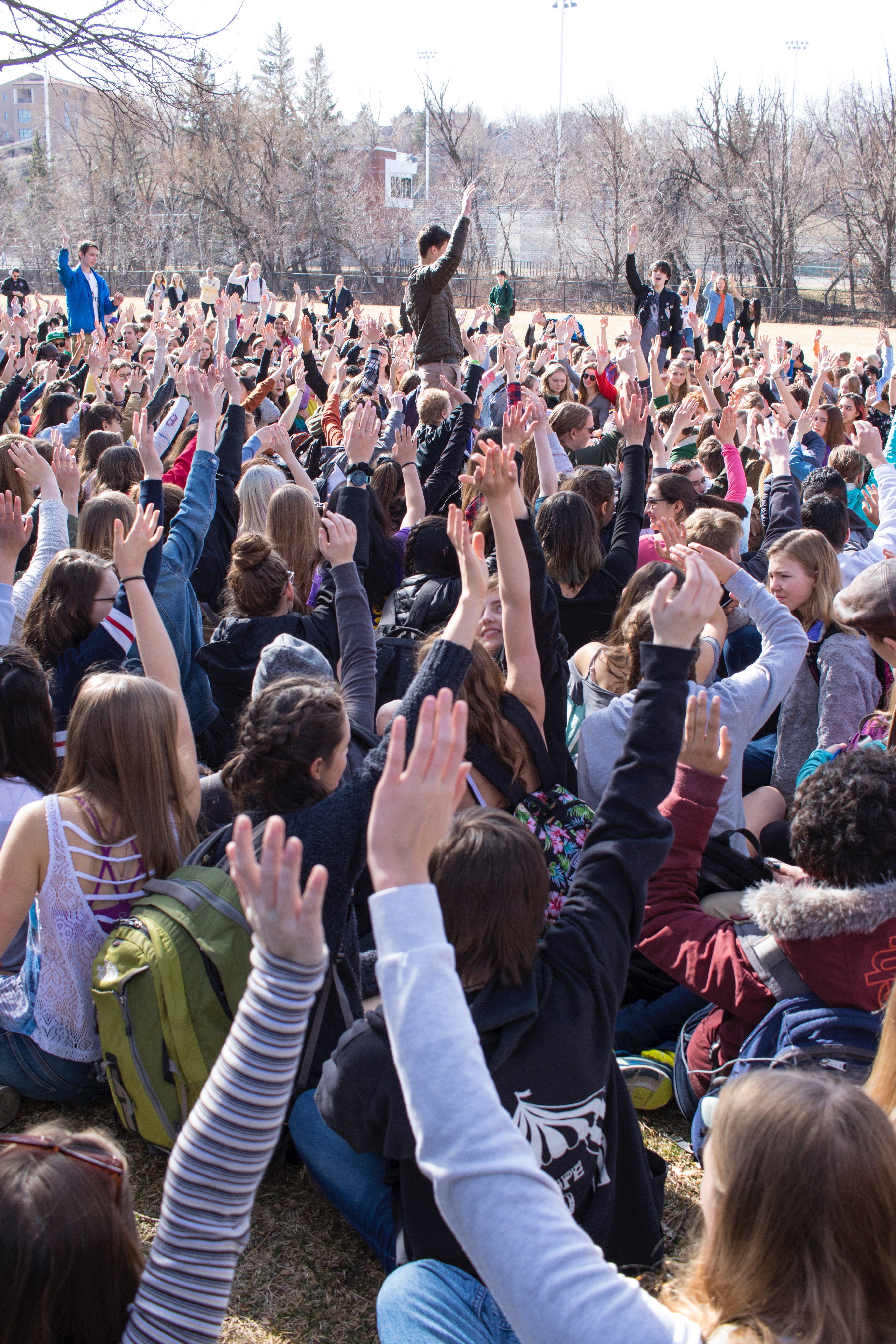 Boulder High School Junior Alec Eyl asks his fellow students to raise their hands if they would like to see the minimum age to buy an assult type rifle to the age of 21. March 14, 2018.(Phil McKenzie/CU Independent) 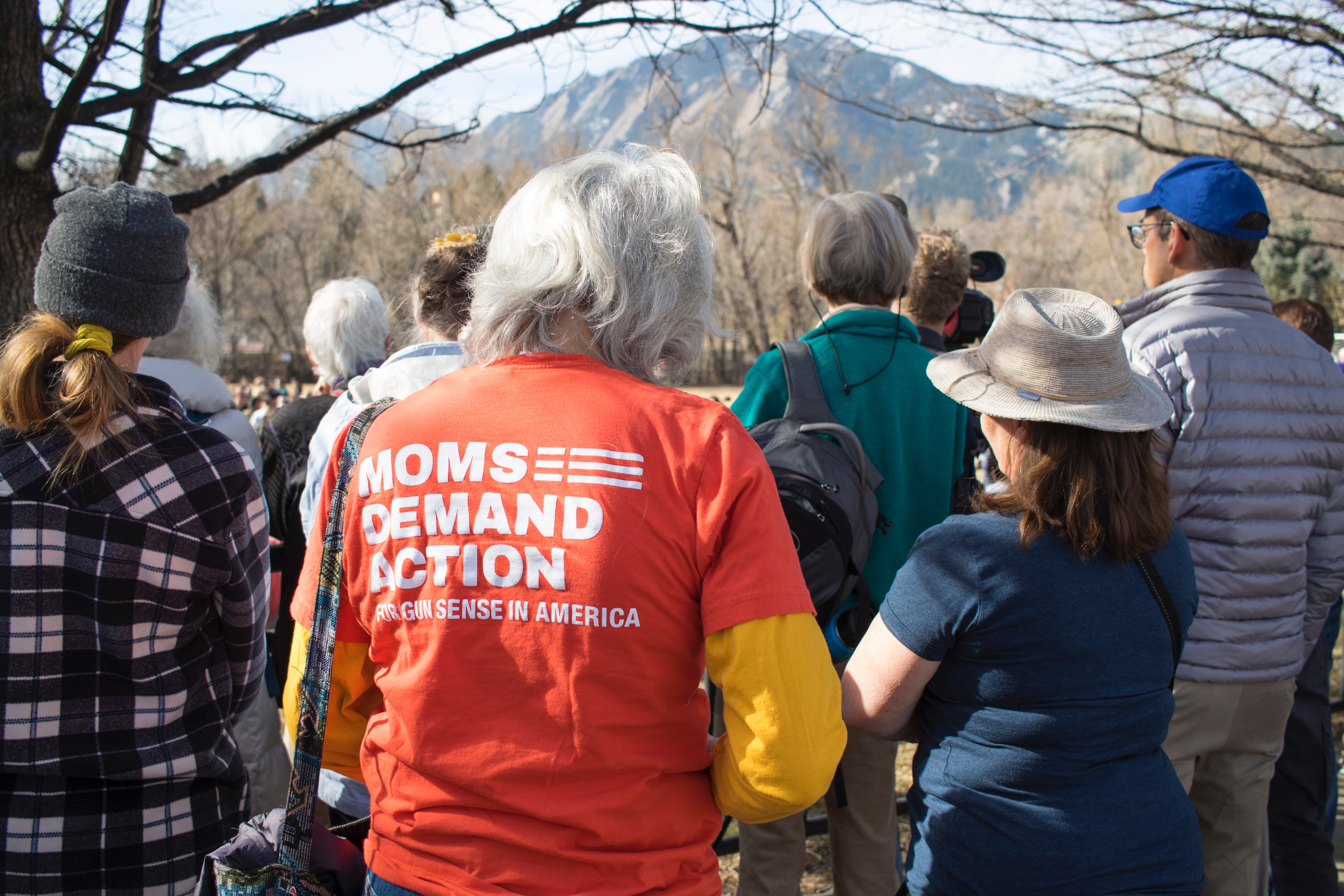 Community members and parents came out to show their support for the Boulder High School walkout. March 14, 2018. (Phil McKenzie/CU Independent)