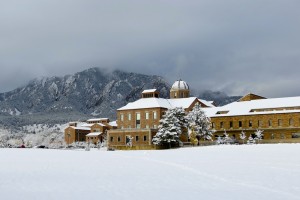 The Koelbel Building sits under a blanket of snow in front of the Flatirons. (Matt Sisneros/CU Independent File)

CU opened its Diversity and Inclusion Summit in conjunction with the city of Boulder on Tuesday.

The theme for the summit, as explained by Associate Vice Chancellor in the Office of Diversity, Equity and Community Engagement, Alphonse Keasley, as, “building the road map.” Keasley said the summit is a platform for students, faculty and community members to help build a 30-year plan for increasing diversity inclusion at CU.

The opening, which included a panel of students and faculty directly involved in the school’s diversity initiatives, was by and large light on specifics.

“Respect and inclusivity are deeply held values that help make Boulder a welcoming and wonderful place to be,” said Brautigam. She acknowledged that “more can be done to address our own implicit bias.”

Brautigam referenced a community perception survey the city, ran this year, which found that non-majority residents who live in Boulder feel less emotionally safe. Being watched with suspicion while shopping and receiving poor service in restaurants were mentioned as common occurrences that make minorities wonder whether they are wanted or belong in Boulder.

Brautigam then posed the question of why the city is not achieving its goal of becoming more welcoming and inclusive of all people.

“I think the answer is that we must do more than just want it […] we need to change our own hearts […] toward advancing sincere commitment to inclusion and equity,” Brautigam said.

CU Student Government President Betsy Sabala followed with a discussion of the new Diversity Inclusion Committee for Excellence (DICE) program. Sabala said the initiative rose from students and student groups who desired a greater degree of communication and unity between different organizations

“[DICE] understands the voices of all students and the need for vehicles of inclusion,” said Sabala.

While no Colorado-specific metrics were discussed by any administrators, there was a clear sense that diversity initiatives at CU need to be moving at a quicker pace and with more efficacy than is currently the case.