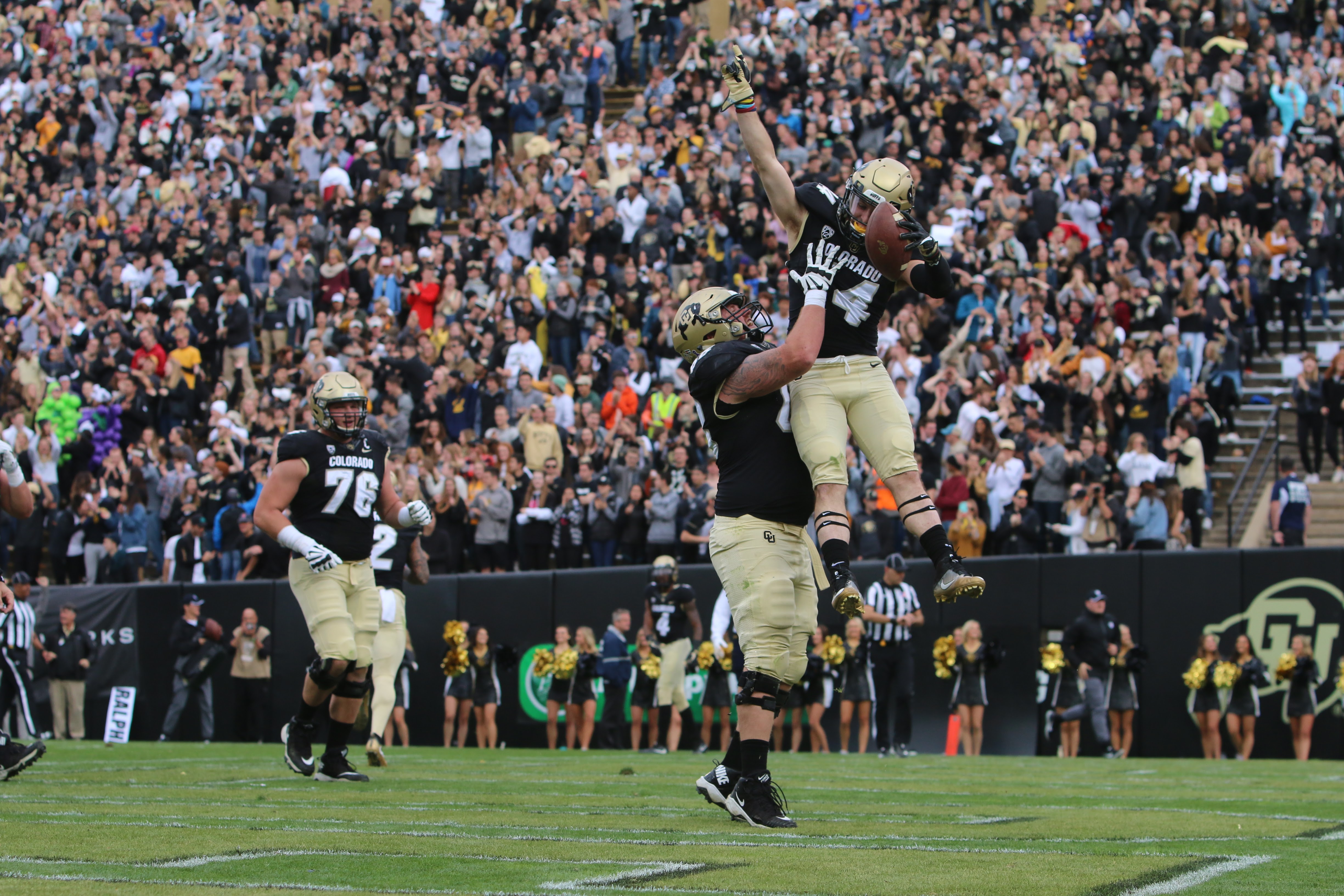 Wide receiver Macintyre is lifted in the air after his touchdown. Oct. 28, 2017 (Fiona Matson/CU Independent)

Colorado’s offense struggled coming into the game. Just one week removed from an ugly 28-0 loss at Washington State, sophomore Steven Montez made things all the more interesting in the alleged quarterback competition against freshman Sam Noyer.

If head coach Mike MacIntyre wanted to motivate Montez by benching him near the end of the first half at Wazzou, he certainly did the job. The decision certainly paid dividends for the Buffaloes this week, who move to 5-4 (2-4 Pac-12) on the year.

“I haven’t been playing very well,” Montez said after the game. “I felt like I needed to get back and make a statement.”

And make a statement he did.

Everything seemed to click for Montez, who earned the start and never looked back. He tore up California’s secondary, completing 20-of-26 of his passes and throwing for 347 yards and three touchdowns.

Senior tailback Phillip Lindsay made Montez’s life easier as he had 166 yards rushing on 33 attempts.

The offense started out sluggish as the Buffs punted on their opening possession. From there, things started to click. Colorado scored touchdowns on their next three drives, all of which started significantly in their territory.

Senior wideout Devin Ross kicked off the scoring with 9:20 left in the first quarter, catching a 22-yard touchdown pass from Montez on a 3rd-and-17.

After California scored a touchdown on its ensuing possession, Montez and the offense drove right down the field on a six-play 75-yard drive. The drive ended with Montez plunging into the endzone on a 7-yard run.

The Buffs paused after the first quarter to honor the late Rashaan Salaam. Salaam played for CU from 1992-94 and remains the school’s only Heisman Trophy winner, an accolade he earned after his monster 1994 season.

Salaam had his jersey number, 19, retired, becoming just the fourth Buffalo to receive the honor. His name and number now join the company of Buff legends Bobby Anderson, Byron White and Joe Romig.

On Colorado’s next possession, Montez lined up in a full house formation with three running backs accompanying him in the backfield.

Montez took the snap, faked a handoff and threw a bomb to senior wide receiver Shay Fields, Jr. for a 65-yard touchdown with 11:53 left in the second quarter. Fields led the team in receiving yards, catching four passes for 101 yards to go along with his touchdown.

The Buffs added two field goals before the end of halftime and continued to have success in the second half. Junior wide receiver Jay MacIntyre caught a 23-yard pass from Montez on a deep dig route, giving Montez his third touchdown pass of the day and the Buffs a 34-14 lead. MacIntyre led the team in receptions with five catches for 53 yards.

Montez’s awareness in the pocket seems to have improved and it was on full display with his passing today. Head coach Mike MacIntyre was proud of his young quarterback.

Colorado would add another field goal to increase their lead to 37-21 in the fourth quarter. With 2:34 remaining to play, junior defensive back Nick Fisher picked off Cal’s Ross Bowers in the endzone, and raced 107 yards down the sideline for Colorado’s last touchdown of the day.

The Buffs’ defense kept the Golden Bears in check throughout the evening. Colorado harassed Bowers, sacking him four times, while hurrying and knocking him down repeatedly.

“I think that we definitely [took] a toll on [Bowers],” junior linebacker Drew Lewis said. “We definitely rattled him a bit. His passes weren’t on point, and he wasn’t trying to scramble as much. I think that all of the pressure we brought had a huge role.”

Freshman defensive back Trey Udoffia led the team with nine tackles in the win. The Buffs’ secondary showed flashes of 2016 against Cal — the defense recorded nine pass breakups.

Saturday was truly a team win for the Colorado Buffaloes. The offense performed at a high level while the defense proved stout. The win is a good sign for CU, which finds itself a win away from securing a bowl berth.

“I expect [we will] enjoy [the win] tonight and try to find a way to beat Arizona State [tomorrow],” MacIntyre said. “We’ll go from there.”

The Colorado Buffaloes take on the Arizona State Sun Devils in Tempe, Arizona, at Sun Devil Stadium on Nov. 4 at 7:00 p.m. 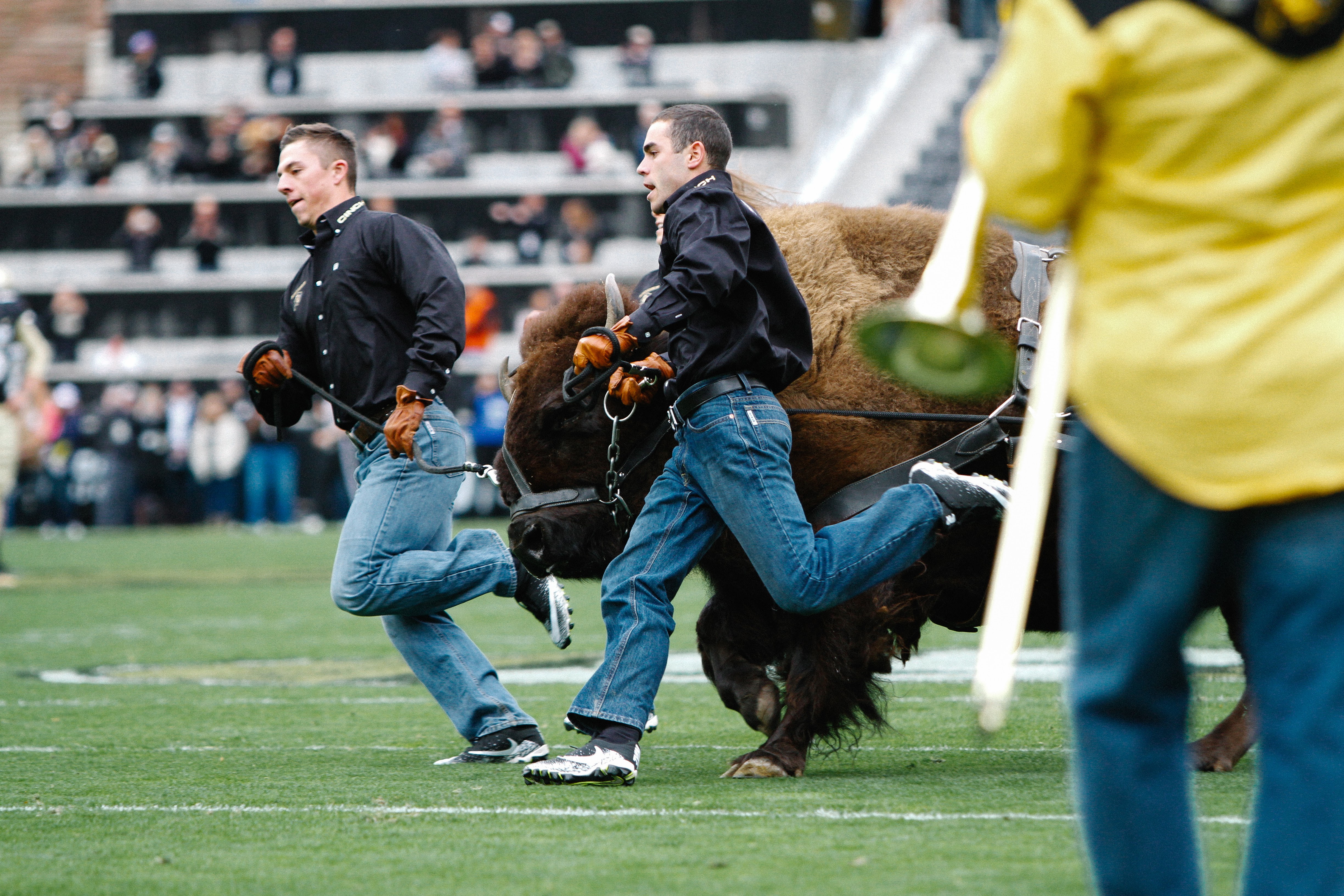 The 5th Ralphie runs the field, guided by her handlers, to open the 2017 Homecoming game against Cal. Oct. 28, 2017. (Bailey T. Miclette/CU Independent) 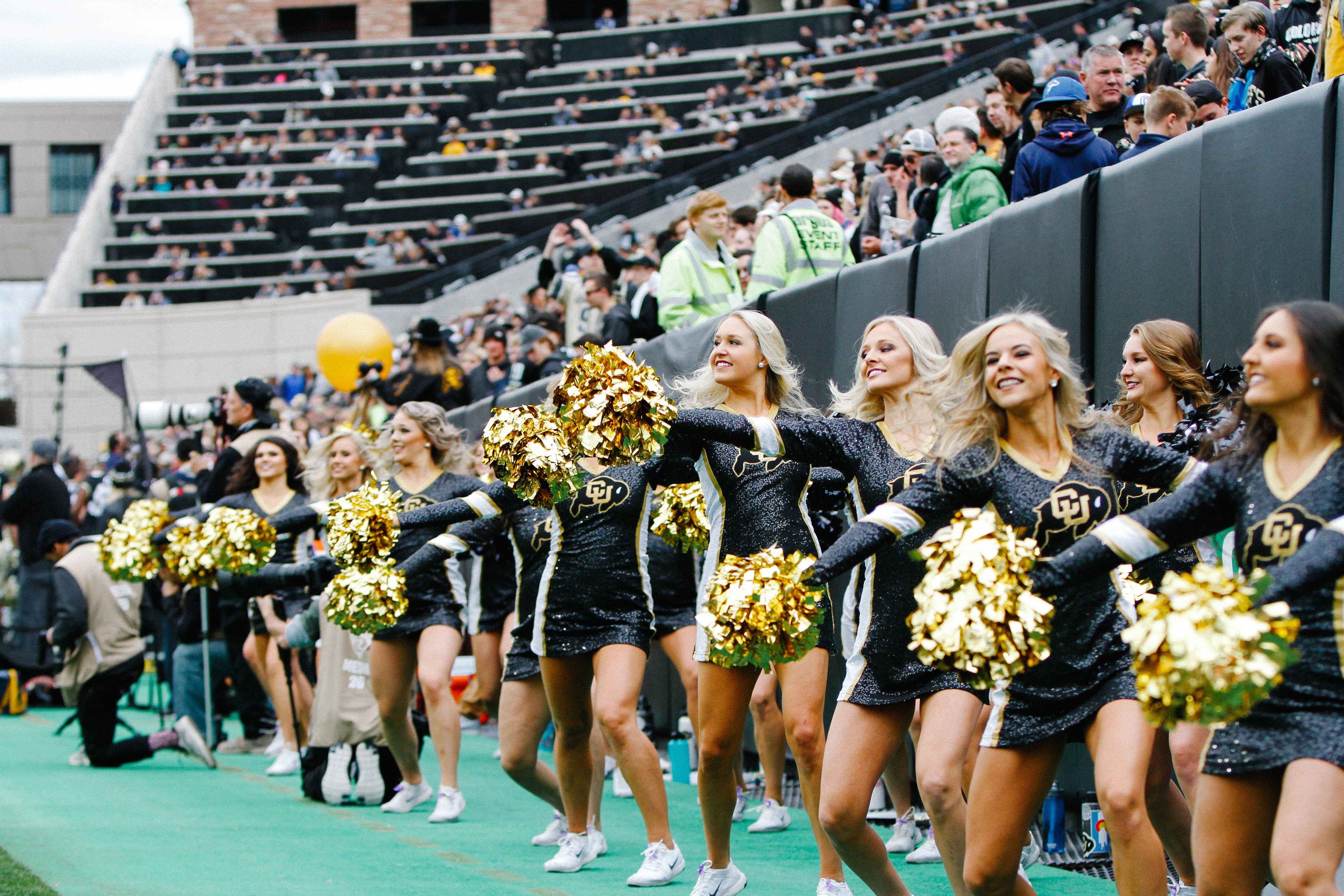 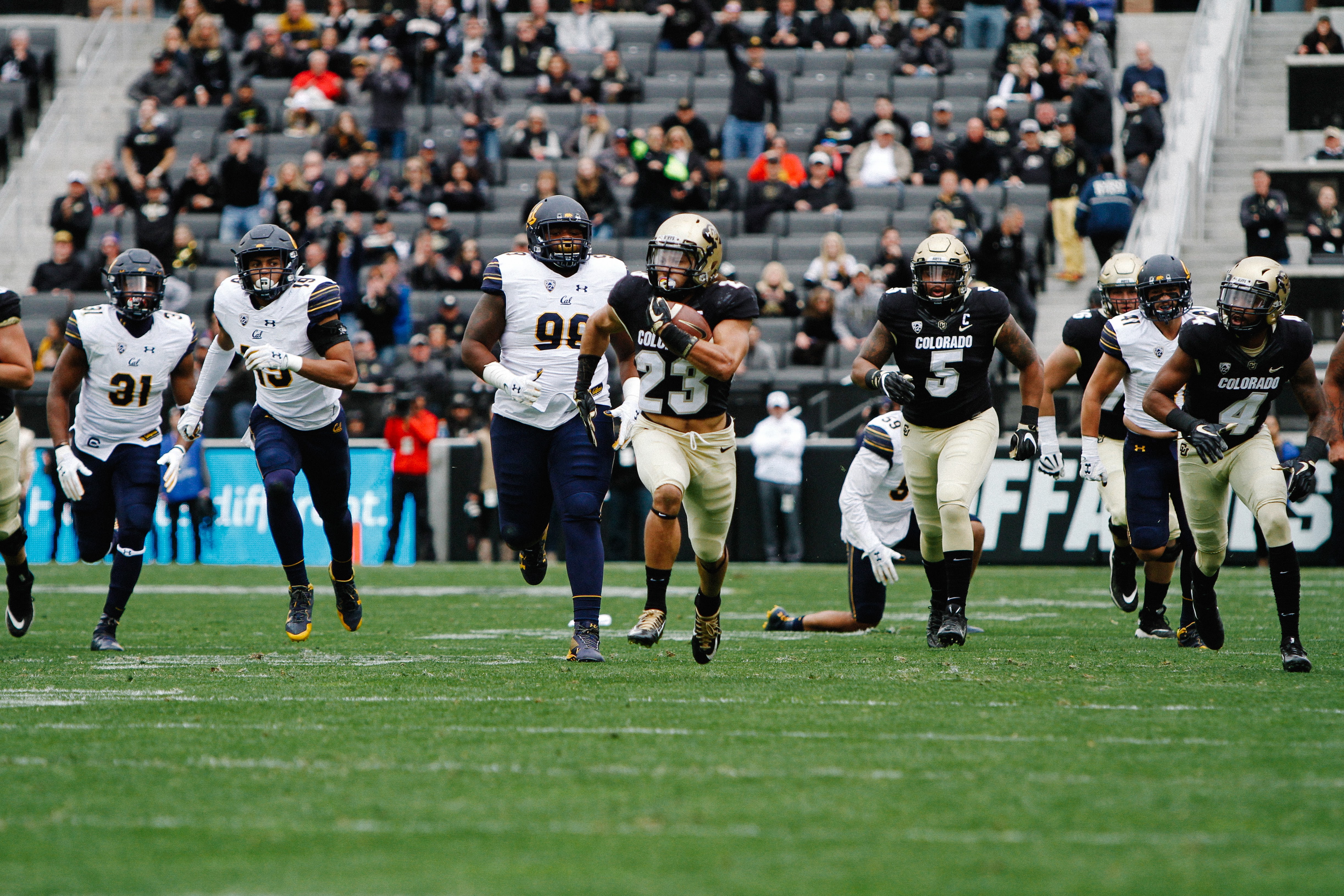 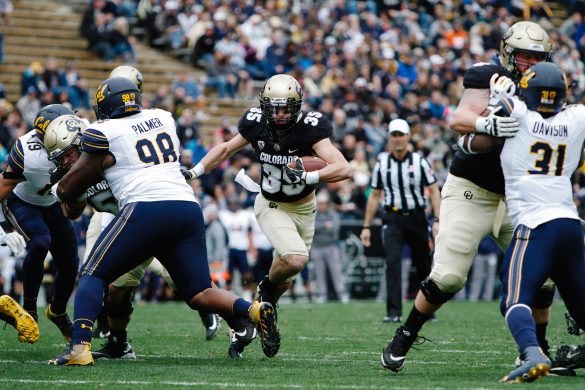 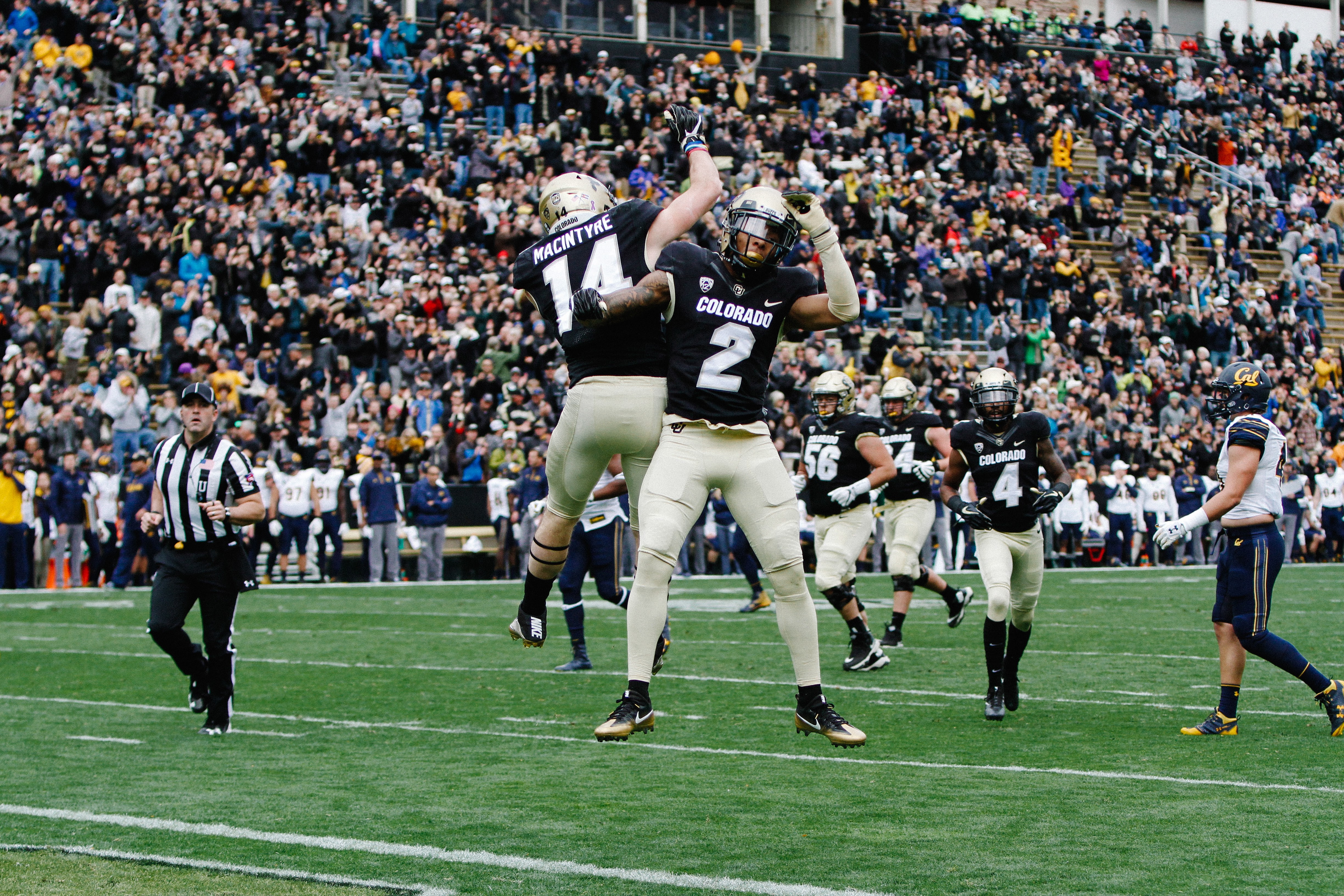 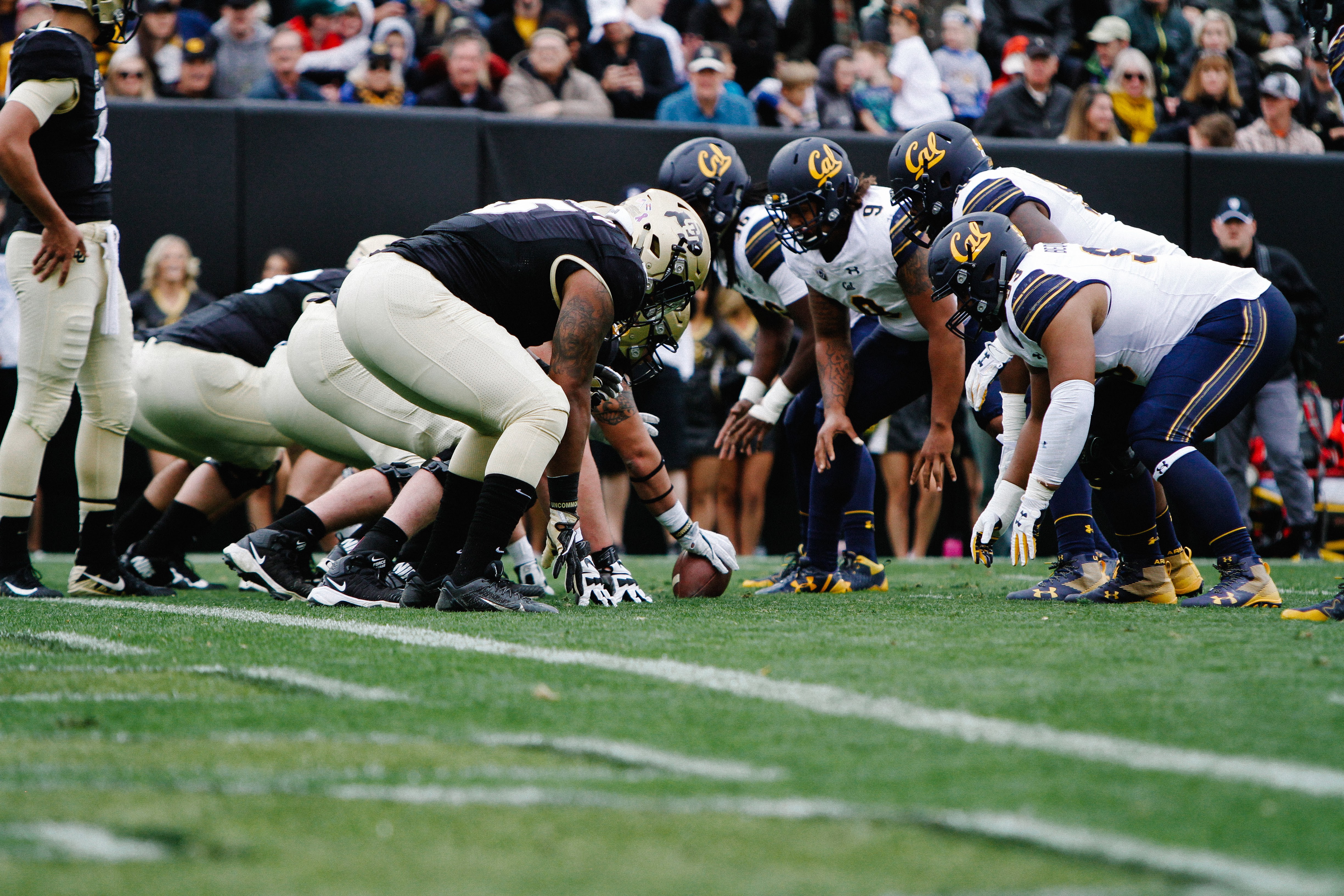 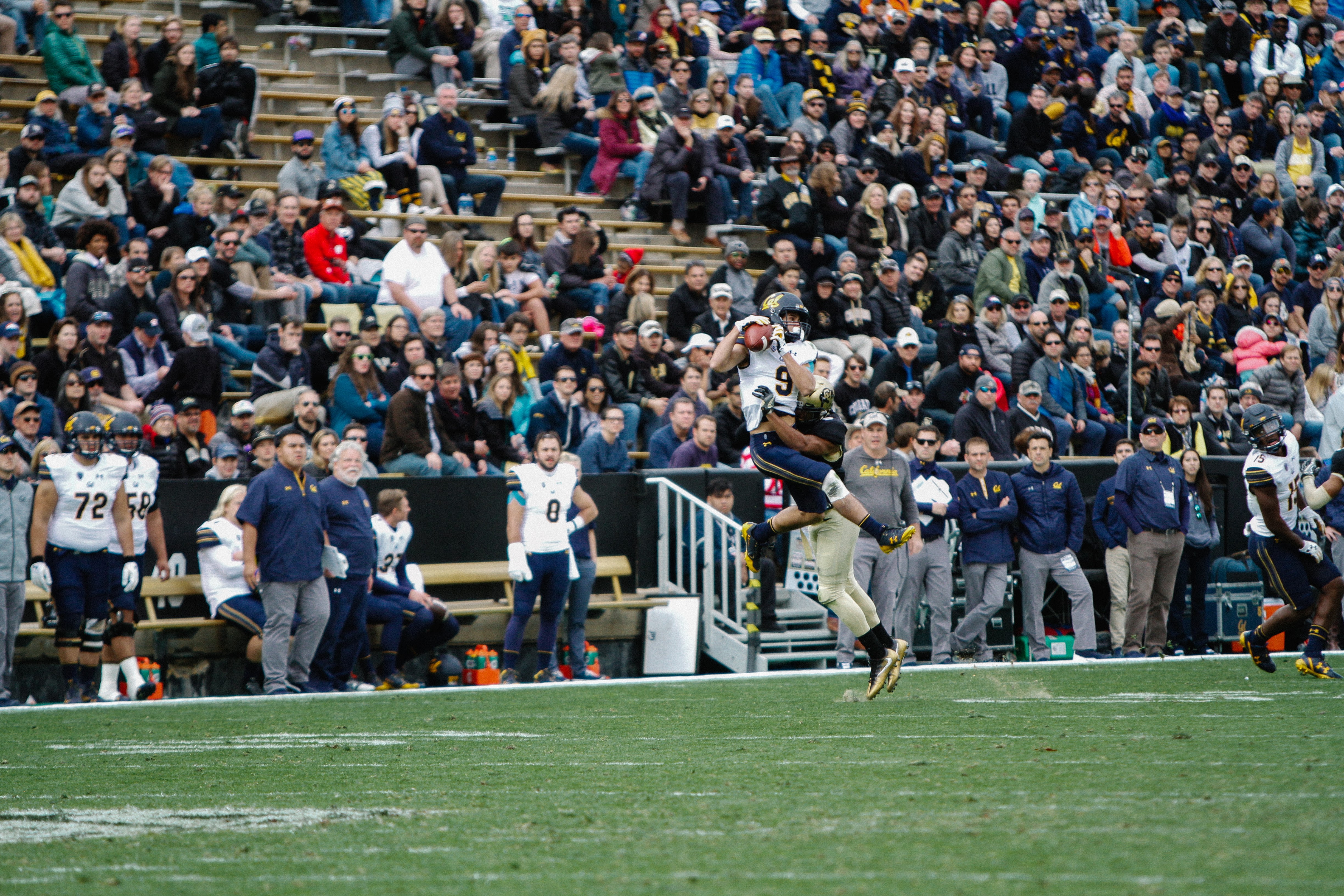 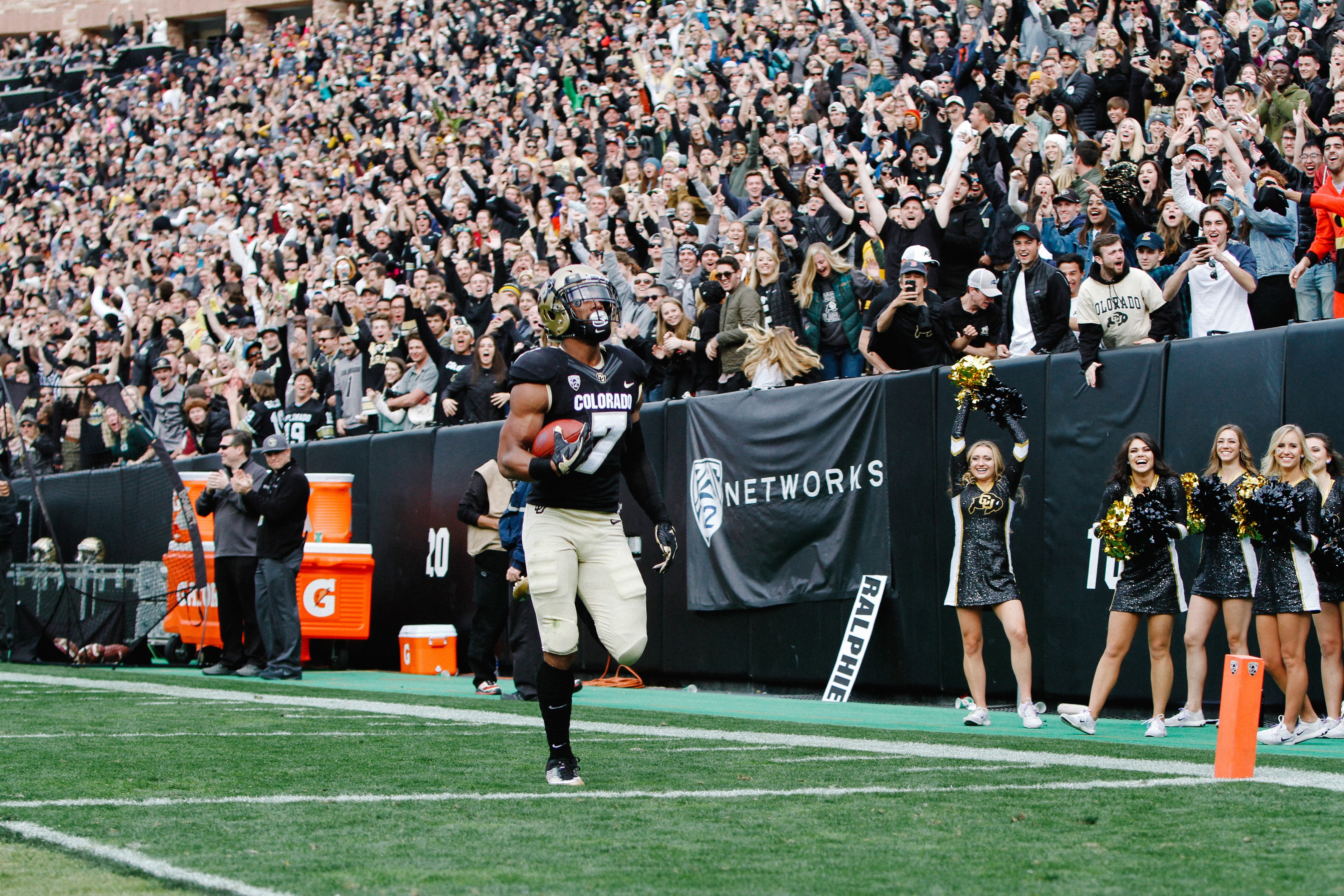 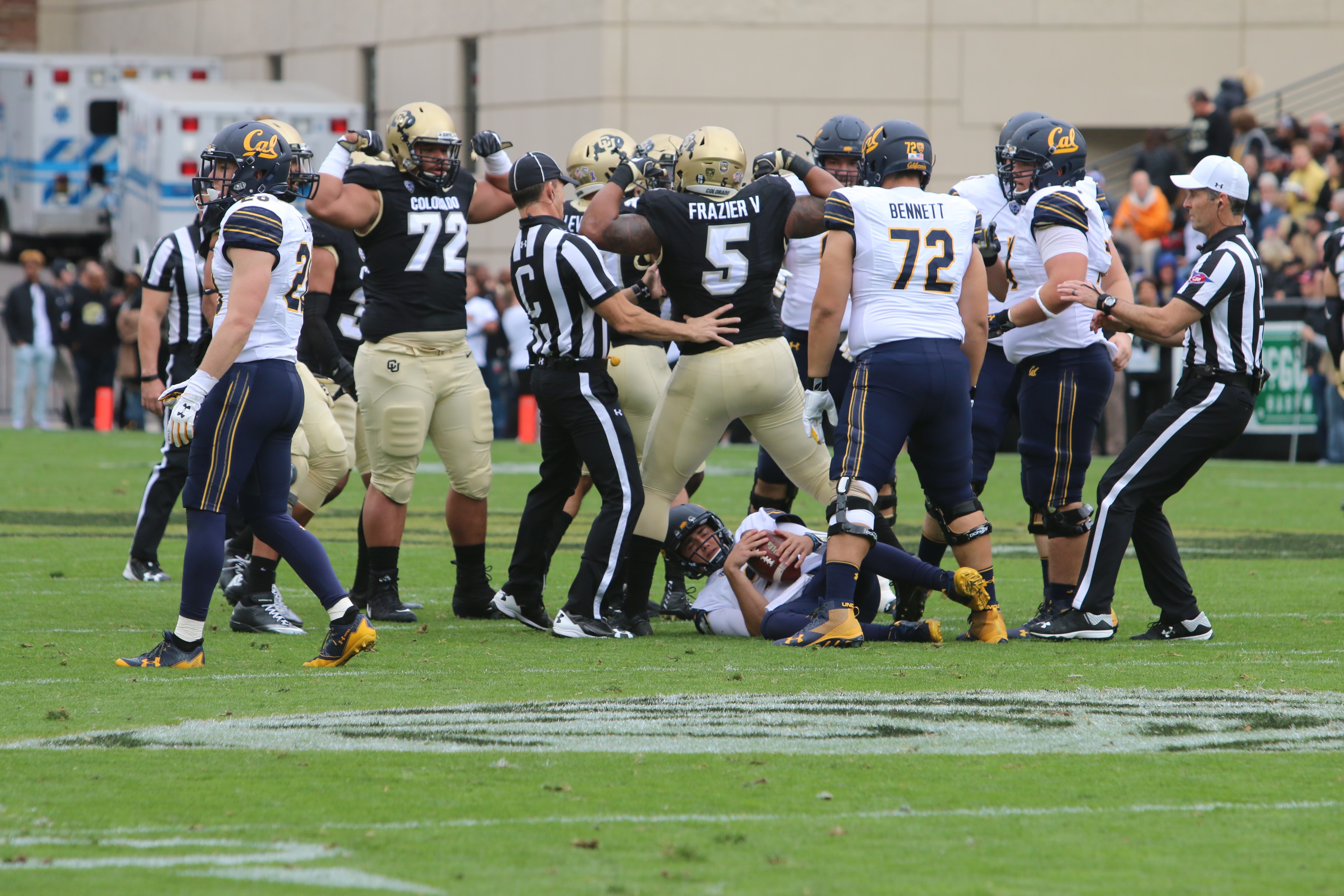 George Frazier and defensive tackle Lyle Tuiloma get in the zone after a play. Oct. 28, 2017 (Fiona Matson/CU Independent) 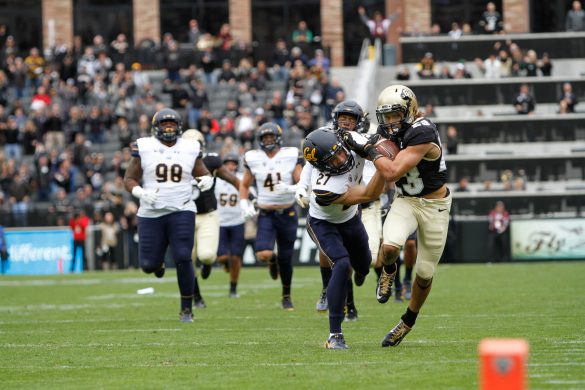 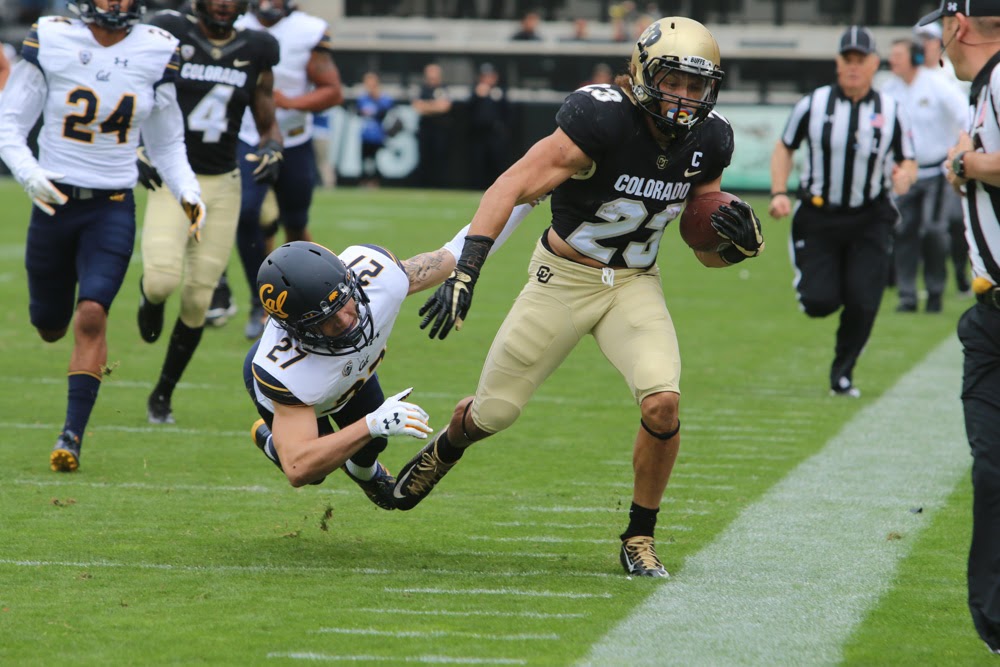 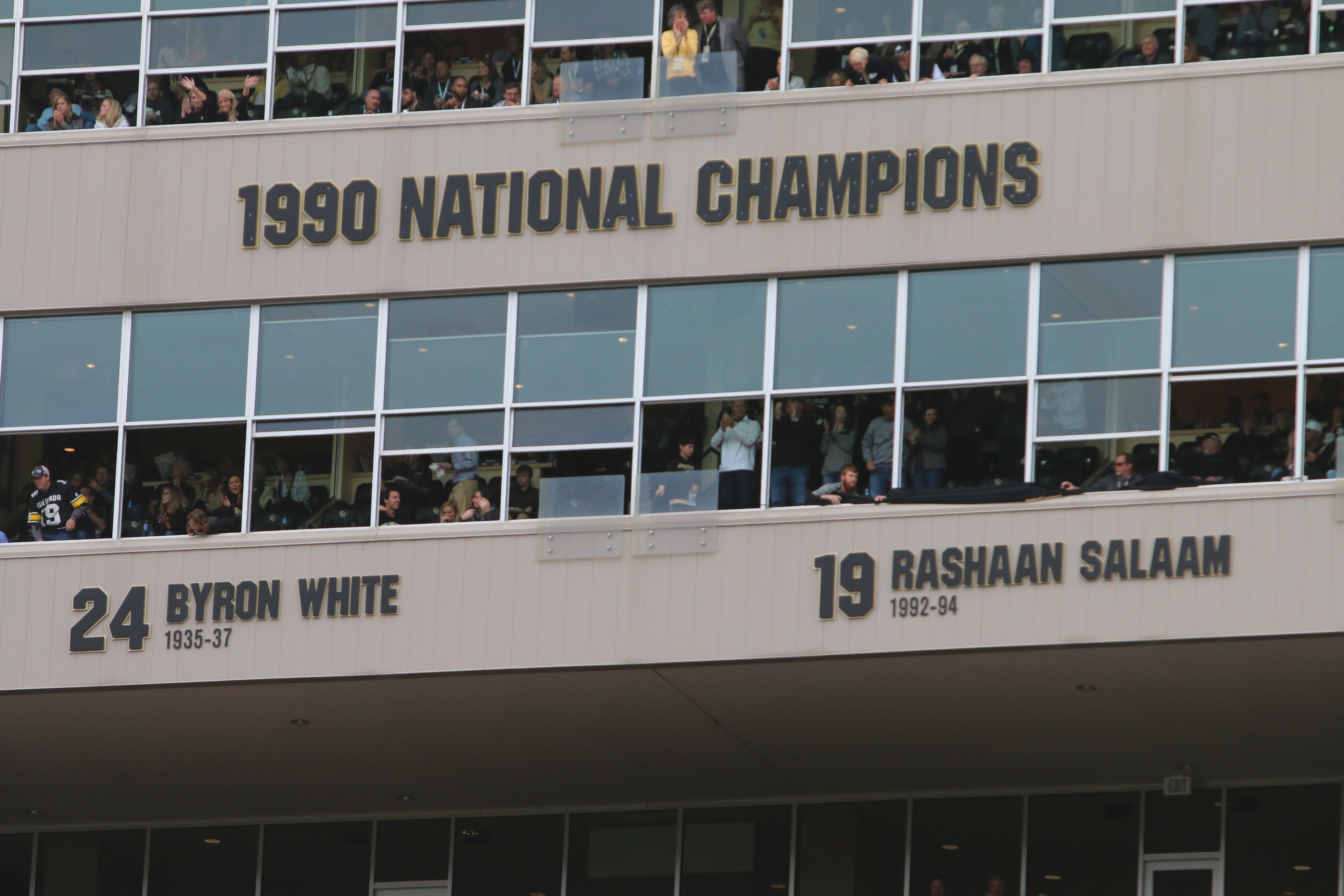 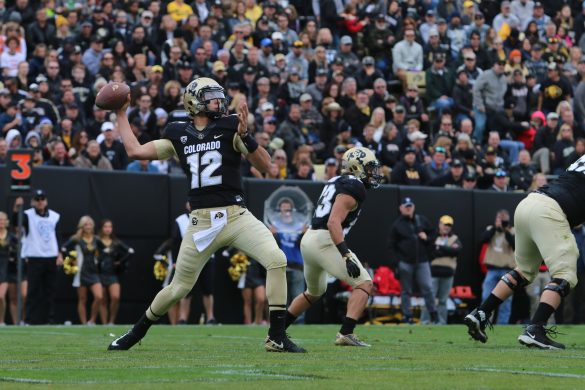 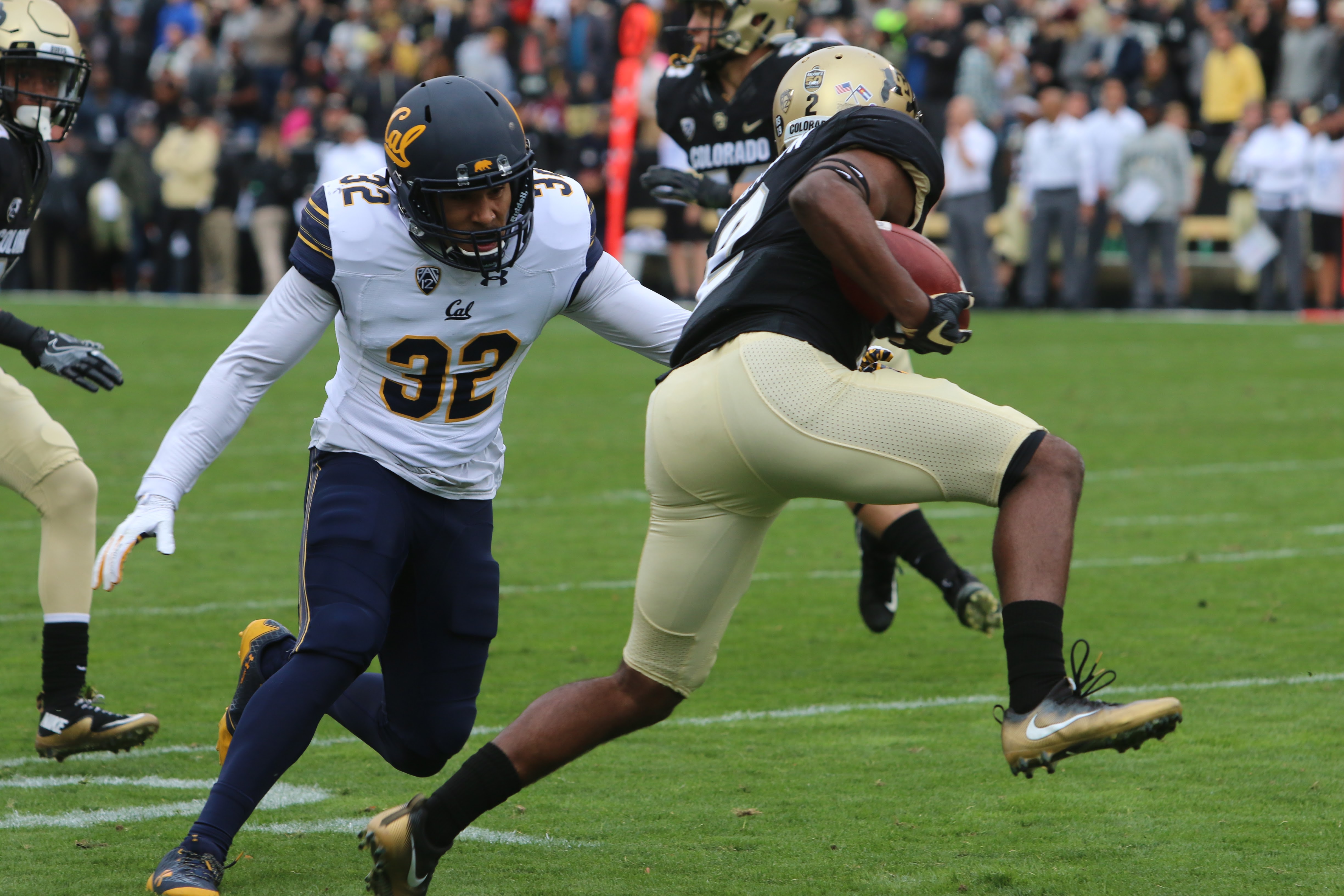 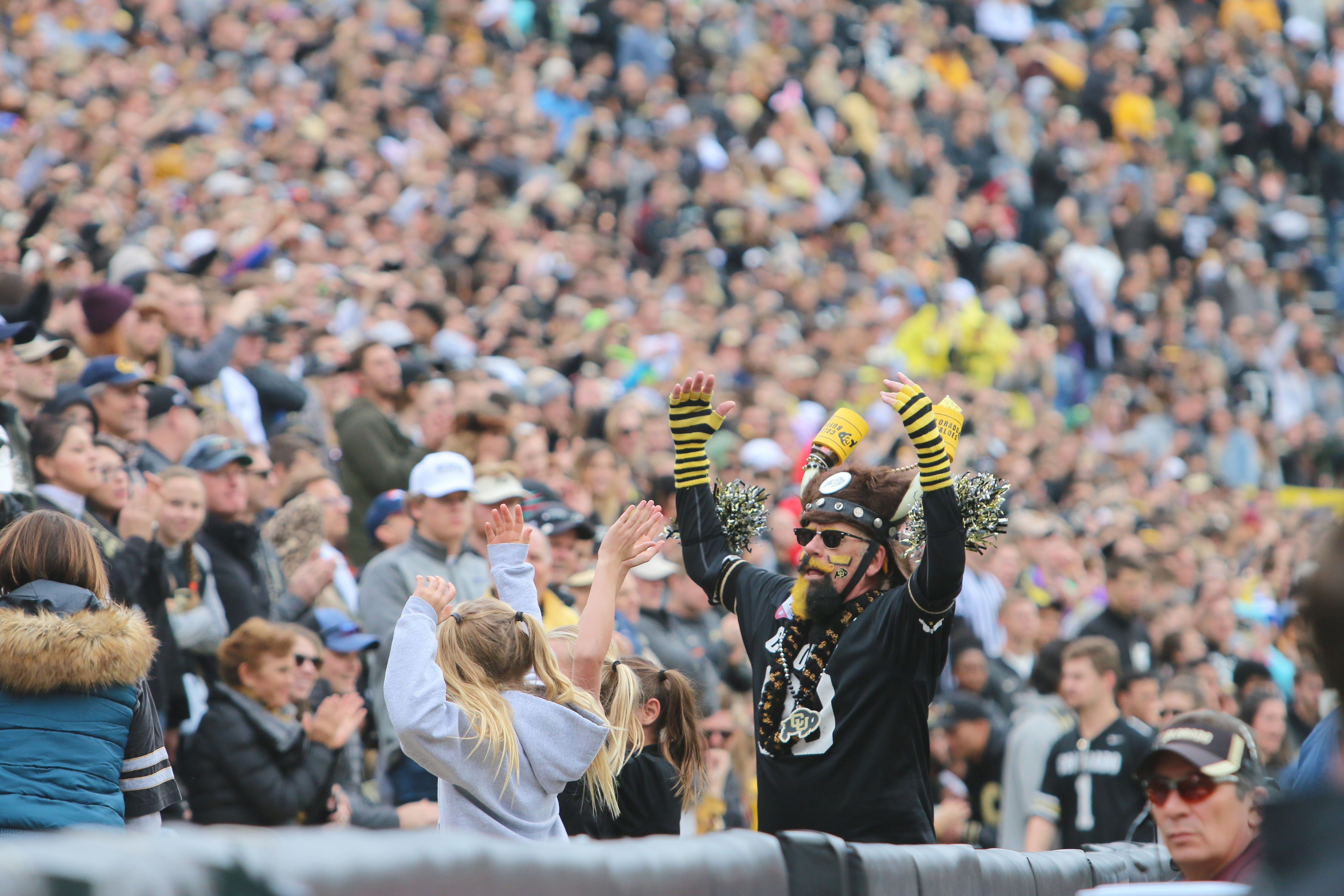 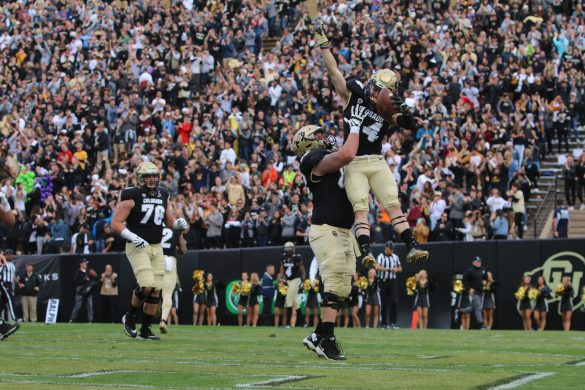 Junior wide receiver Macintyre is lifted in the air after his touchdown. Oct. 28, 2017 (Fiona Matson/CU Independent) 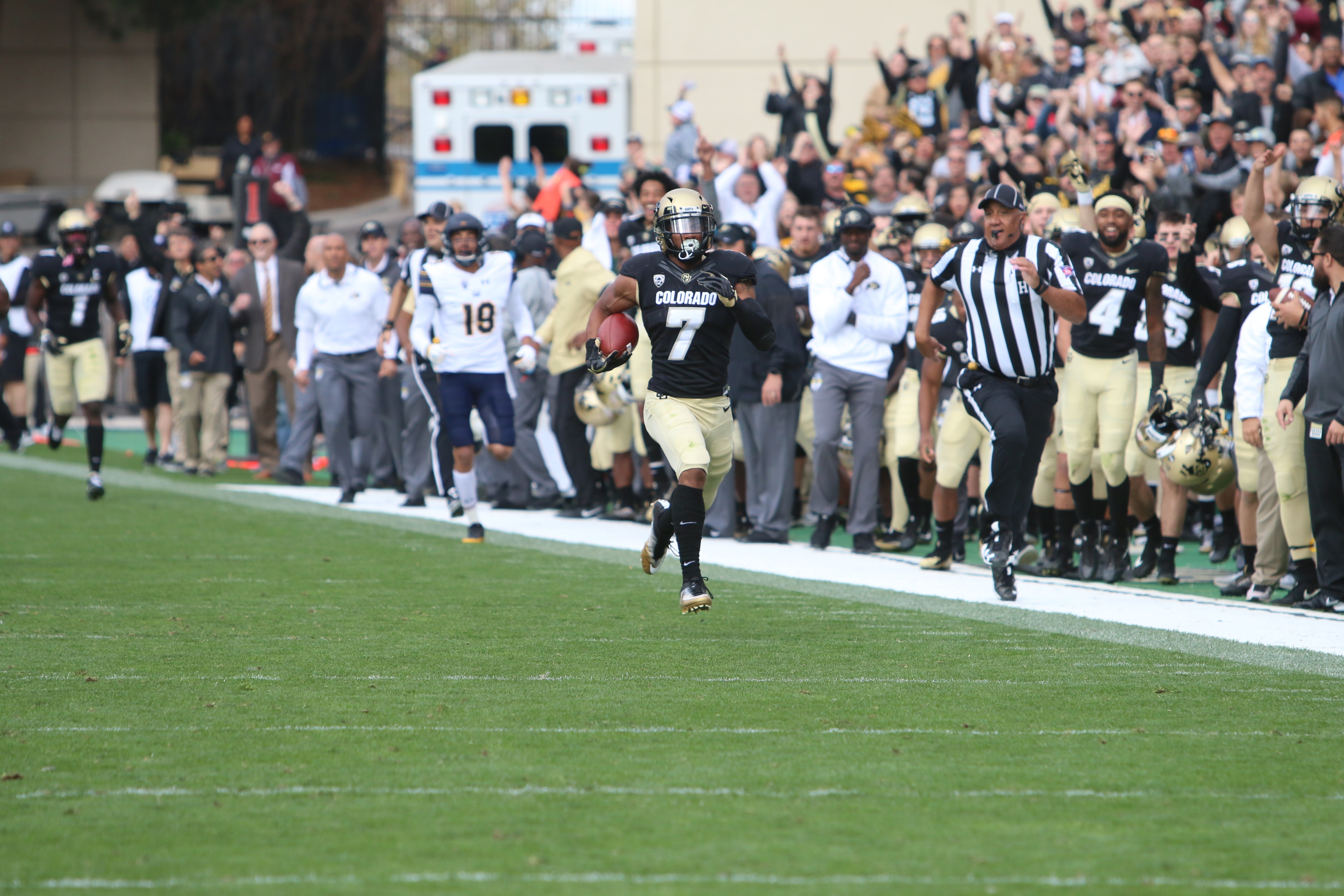 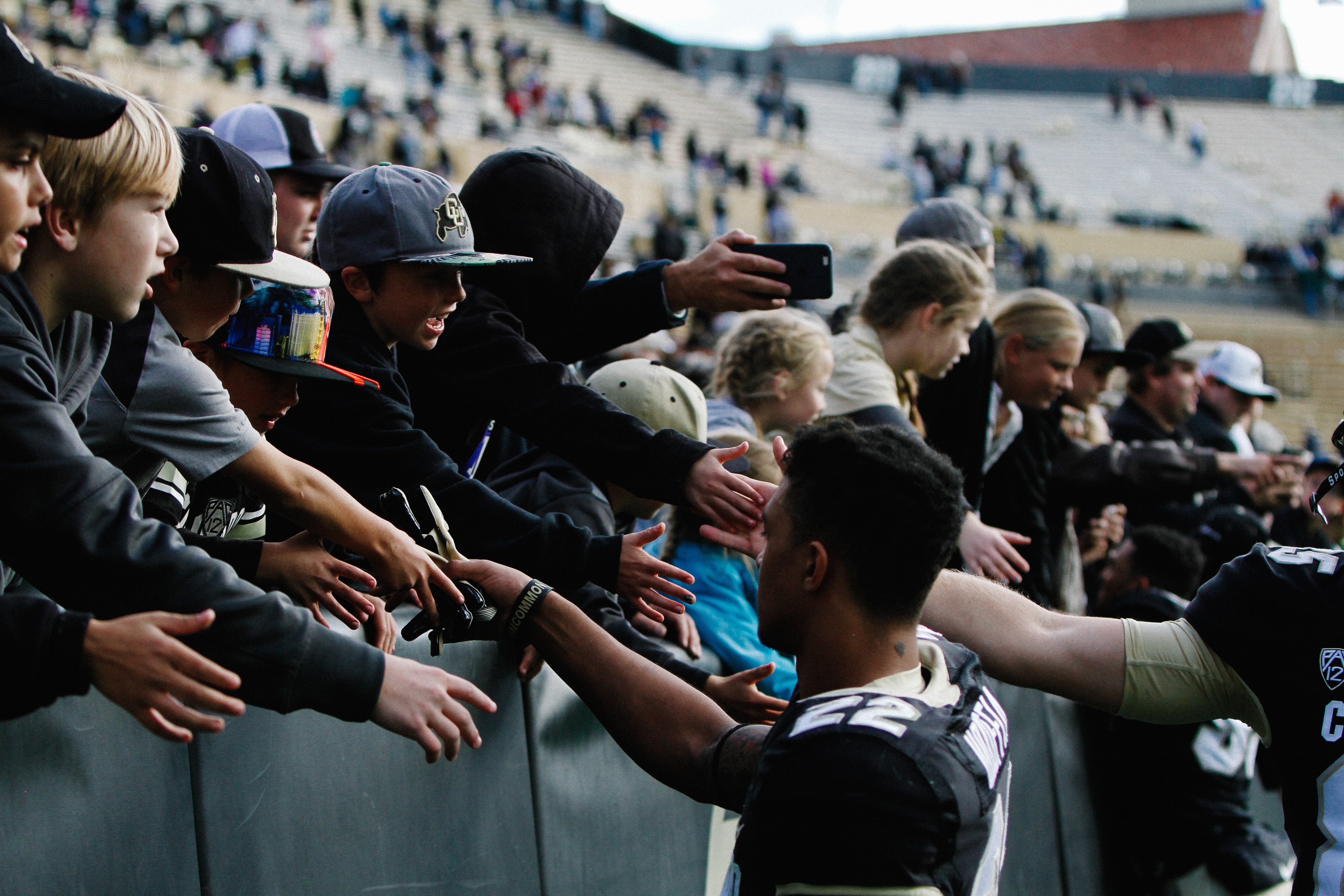