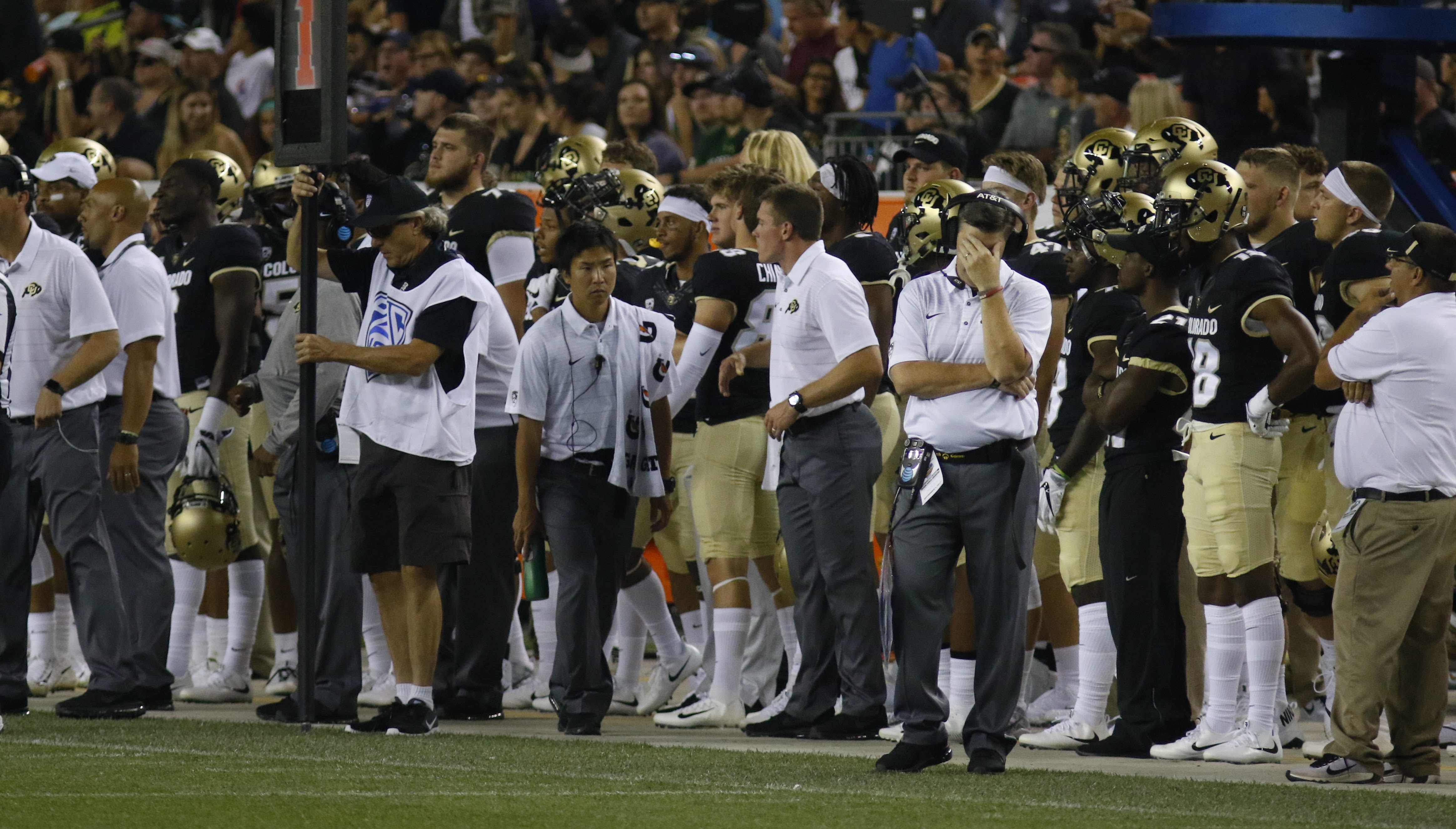 The No. 15 Washington State Cougars hosted the Colorado Buffaloes on a cold and rainy night Saturday. The Buffs failed to find success on either side of the ball, falling to the Cougars in Pullman, 28-0.

The weather proved to be a factor early, as Washington State running back Jamal Morrow coughed up the football on the Cougar’s second drive. The heavy rain and gusting winds also made it difficult for wide receivers and defensive backs alike to catch the ball, as drops plagued both teams on both sides of the ball for much of the game.

Senior tailback Phillip Lindsay, who entered the game just five yards short of the 1,000 yard mark on the season, reached the landmark in the first quarter. He became the sixth player in the FBS to reach the milestone this year.

Saturday featured another sizable workload for Lindsay, as he rushed 29 times for 98 yards. The Cougars kept him in check; aside from his game-high rush of 24 yards, he managed just 2.64 yards per carry.

Just a couple minutes into the second quarter, following a failed fourth-down conversion by the Buffs, the Cougars struck first on a 50-yard catch and run from Luke Falk to Davontavean Martin.

Things did not improve for the Buffs, as starting left tackle Jeromy Irwin was ejected for targeting and junior defensive back Isaiah Oliver went down after what looked like a possible hamstring injury.

The Buffs’ offense struggled in the first half. Sophomore quarterback Steven Montez didn’t complete a pass until well into the second quarter, and the Buffaloes couldn’t find ways to move the chains.

The Buffs were 0-of-8 on third down until they converted on the last play of the half. On the night, CU was abysmal, converting just 1-of-17 attempts.

In the first half, Phillip Lindsay accounted for 58 of Colorado’s 82 yards.

Falk appeared to find a rhythm as the half went on, as he led an impressive 10-play, 81-yard drive that consisted of short, quick passes. He was making all the right moves and eventually capped off the drive with an 18-yard strike to Brandon Arconado. Washington State was now on top 14-0 in the second quarter.

The Buffs came out with a different look in the second half, as freshman quarterback Sam Noyer took the field for CU’s first drive of the third quarter. Noyer failed to find the endzone as the quarterback for the Buffs, but ultimately finished with a slightly more impressive stat line than Montez. Noyer went 7-of-18 for just 53 yards.

Not for the first time in the game, the Buffs dropped a possible interception in the third quarter. Falk threw it right to senior defensive back Ryan Moeller and what could have been an easy pick-six turned into more disappointment for the Buffaloes. The ball bounced off Moeller’s hands and fell to the ground.

The Cougars capitalized on the mistake, and Morrow ended that drive with a nine-yard touchdown, increasing the lead even further to 21-0.

The Buffs caught a break when a punt bounced off Washington State’s Marcus Strong, which Colorado recovered on the Cougars’ 25-yard line.

After being stopped on third down, the Buffs chose to go for it on fourth down even though they were in field goal range. After it appeared that Ross made a catch for a first down, the call on the field was overturned.

The Buffs got another chance in the red zone later in the game, but Noyer missed senior wide receiver Shay Fields, Jr. on what could have been the Buffaloes’ first score of the game.

It was the third time in the game the Buffs turned it over on downs. Later in the game, the Buffs would do it a fourth time.

The bleeding did not stop for the Buffs, as a 10-play drive led the Cougars down the field and into the endzone again. Falk connected with Renard Bell for the former’s third passing touchdown of the night, making the score 28-0. It would end up being the last score of the night.

Colorado was held to just 174 yards of total offense and averaged just below 2.5 yards per play.

Much of Washington State’s defensive game plan revolved around stopping Lindsay. The Cougars continually stacked the box and forced CU’s quarterbacks to beat them, which made it tough for Lindsay to find running lanes. Not helping Lindsay out was Colorado’s atrocious quarterback play.

Montez didn’t complete a pass until it was almost half time, Noyer was brought in as relief at the start of the second half and freshman Casey Marksberry even saw the field for a couple snaps in the fourth quarter. Collectively, the Buffaloes’ signal callers went 13-of-34 for 94 yards through the air.

The game certainly seems one to forget for the Buffs, as they fall to 4-4 on the season with the loss. It is their fourth Pac-12 loss in five conference games.

Next up for CU is a home game against another conference foe, Cal. The game kicks off at  12 p.m. Saturday, Oct. 28 at Folsom Field.