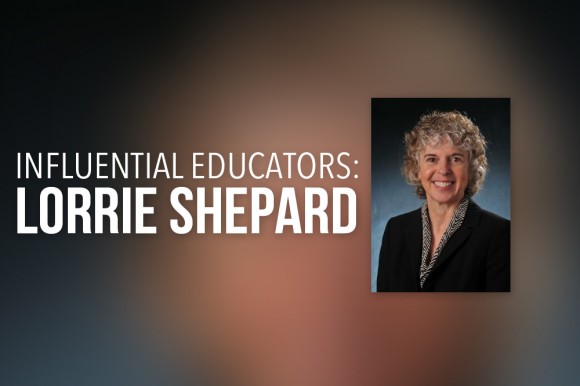 Having been acknowledged as one of the most influential scholars in education, Lorrie Shepard continues on her fight towards creating a better environment for teachers and students within a test heavy system.

“When you grow up poor, and you’re the first generation to go to college – I don’t think I had a sophisticated enough understanding of what was possible for me to do, to even imagine being a researcher and doing the kind of work that I do,” she said.

Shepard, Dean and Distinguished Professor of the School of Education at the University of Colorado Boulder, grew up in Riverside, Calif., and was the first generation of her family to go to college.

“Being first generation, and not knowing people who went to college, you don’t have an idea of what’s possible,” Shepard said. “At one point I wanted to be a teacher because I was exposed to teachers.”

A dean for 14 years now, Shepard was awarded as a University Distinguished Professor.

Although she is considered as one of the most influential scholars in education among 200 researchers in the nation, Shepard didn’t want to be Dean of the School of Education at first.

“Something interesting is that I didn’t particularly want to become an administrator,” she said. “At first, I just thought I was going to do it temporarily because we needed someone.”

“I had to be persuaded to stay, I had to learn what was valuable about it. I like representing the faculty here, they are really terrific, and doing rigorous work that is making a difference.”

She explained that it wasn’t ivory tower or esoteric, “it’s work focused on educational policy, focused on learning in classrooms and out of school programs. I’m just really proud of them, I like being a spokesperson for them.”

Shepard is also a fellow at the National Education Policy Center.

“I just advise the program, identify topics that are critical to national policy and education, it is sort of like an advisory panel being a fellow.”

Shepard has also worked a lot on psychometrics which she said is “a type of statistic specifically focused on the quantitative modeling underlining test scoring. For example, it takes psychometric modeling to allow the SAT to give different forms of the text and have them all produce equivalent results.”

On the subject of mandatory testing, Shepard said “many would classify me as a critic of testing, especially of high stakes testing.”

“[I’ve] done studies, including surveys of teachers that say how the testing affect their instruction. In one very large study we compared how competent the students looked on the test compared to how well they did in the classroom. Those are called validity studies.”

“We’ve done a lot of work examining the phenomenon of teaching the test, what happens when you just get good at the test but can’t use that knowledge in any other way beyond the boundaries of the test. That is sometimes called test score inflation,” she said.

She explained that “that’s why [she]’s a critic, it’s that [she has] shown ways that tests have distorted the curriculum and harmed learning instead of just trying to measure the learning. But if people start teaching to the test then it can actually distort learning opportunities. “

“In an ideal world, I would have much better standardized tests,” said Shepard. “They’ve actually gotten worse over time because it is expensive to build good ones, so if you want to do a lot of testing, you have to have bad ones. It’s kind of an overstatement but it’s true.”

She explained that “it’s possible to build much more thoughtful assessments that get at higher order thinking instead of memorization. “

Her answer is that there would be “fewer tests, many fewer tests than that are currently in use. It would be better assessments that you could evaluate how well the schools were doing but without taking so much testing time and without distorting the curriculum.”

Shepard’s description of bad tests “are ones that use the same format over and over again, so that people learn to memorize for the test. They are low-level questions, essentially just asking a question that you can have memorized the vocabulary word to answer to – instead of things that get at reasoning with the content knowledge, those are better tests.”

She explains that better tests are test where students “can actually use their knowledge as apposed to just regurgitating the knowledge.”

“If the entire test is biased and biased in exactly the same way, the statistical models can’t help you but typically what you can find are the things that are relatively more difficult for certain groups.”

As an example for this, Shepard said “these students did very well on these 20 items but suddenly people we thought were preforming well are having trouble with these particular three items.”

Shepard said that to define test bias “we have to distinguish bias from overall poor performance, so what you’re looking for with bias is that something about the test obscures the genuine abilities of the individuals responding.”

Shepard’s most recent work looked at the kinds of test that are being purchased by school districts to prepare their students for the actual standardized test, these are called interim or benchmark assessments.

“Here you’re talking to somebody that is already worried that the standardized tests at the end of the year take too much time and distort the curriculum.”

In so many words what the research found was that “in very few cases do teachers learn something new from these tests. Yes, they’re taking more time, lots more money, and also convey to the students, repeatedly, that they are not very good at the content or they are good but they are not needed to be told that.”

This is where some of her concerns over testing are rooted.

On how to better tests, Shepard said “I think they need better access to good curriculum materials. So, instead of teaching the test and more tests like the curriculum if they think that teachers aren’t covering certain things. I think they should be provided with ample tasks that are – it doesn’t have to be a whole test, it can be on one page laying out a problem that would be challenging for the kids and then use that to lead a conversation so you can illicit kid’s thinking about a particular problem instead of having them problems on a work sheet.”

Shepard believes that investing in richer curriculum “will show if the kids have a problem about their reasoning.”

Shepard “would do way less testing but not less assessment.”