Quarantine playlist: Earl Sweatshirt’s ‘I Don’t Like Shit, I Don’t Go Outside’ captures our world today 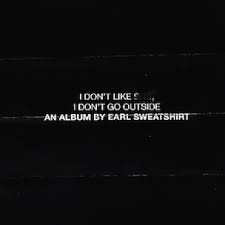 Self-isolation for many has been tailed by thoughts of loneliness with a side of lackluster motivation. Being holed up inside has given rise to the inner demons that have claimed the real estate once occupied by work and social interaction. During these unprecedented times, having an outlet or entity to relate to is of great importance. Los Angeles rapper Earl Sweatshirt’s second album, “I Don’t Like Shit, I Don’t Go Outside,” administers this bearing.

“I Don’t Like Shit, I Don’t Go Outside” transposes itself from its 2015 release date into the ongoing pandemic without skipping a beat. While the album title may contradict the feelings of the present, its overcast message and dismal lyrical load are all the more potent.

On the album’s opening track “Huey,” Earl spits “I spent the day drinking and missing my grandmother, just / Grab a glass and pour some cold white wine in it / Or Colt .45 in it, you know how I get.” Off the bat, the stark yet telling grim lyricism of Earl sprouts as he moots with the idea of departure. “I Don’t Like Shit, I Don’t Go Outside” encapsulates what it means to question everything around you, including yourself.

Unnerving distorted piano-heavy instrumentals topped off with lo-fi-esque percussive kicks and snares lay the foundation for Earl’s cutthroat monotonic vocals. The hook on his track “Faucet” is no exception. Earl raps “(a)nd I don’t know who house to call home lately / I hope my phone break, let it ring / Toe to toe with the foes, new and old / Basic hoes try to cage him like the po’ / When I run, don’t chase me,” delving into his discomfort with living at home.

Since age 16, Earl had been rattling off rhyme schemes that had garnered him comparisons to the likes of the masked lyrical mastermind MF Doom and trailblazing multi-rap personality Eminem. His debut mixtape under the name Earl Sweatshirt, titled “Earl,” paved the way for his brutal horrorcore phrases compact with ingenious vocabulary that managed to rhyme almost every other word. This reckless 16-year-old misfit dove into lyrical content revolving around murder, rape and violence and became the original Earl Sweatshirt. Yet, five years later, Earl’s growth is evident.

“I Don’t Like Shit, I Don’t Go Outside” unveiled a confident and conscious version of his previous self. The daunting rap instrumentals remained a constant, while his lyrical approach mutated into being more lethal and purposed.

In “Grief,” Earl analyzes his drug and partner habits with his friends, comparing the girls knocking at the door to the sound of a gavel in a courtroom. Earl wrote the track after coming up with his 2015 album name. “Grief” represents the literal state he was in at the time of writing. The vulnerable introspective bars he spits showcase him in a cooped-up condition after being prescribed to stay inside for an extended period of time following a spell of medical exhaustion. The eventual music video release for “Grief” resulted in controversy when Sony released an album pre-order on iTunes without any previous album announcement.

In an interview with NPR following the release of “I Don’t Like Shit, I Don’t Go Outside,” Earl expressed his frustration with Sony’s mistake as he stated that this felt like his actual first album. “This is the first thing that I’ve said that I fully stand behind, like the good and the bad of it. Because it’s just — I’ve never been this transparent with myself or with music. I’ve never been behind myself this much.”

The 2015 “I Don’t Like Shit, I Don’t Go Outside” Earl is not the same as the current “Some Rap Songs” and “Feet of Clay” Earl. As he continues to perfect his craft as an artist, Earl has also come into his own being. While Earl has made it clear that he is no longer in a depressive isolated state, his 2015 release will forever carry its self-made angsty aura and his dejected lyrical persona within its 30-minute runtime.