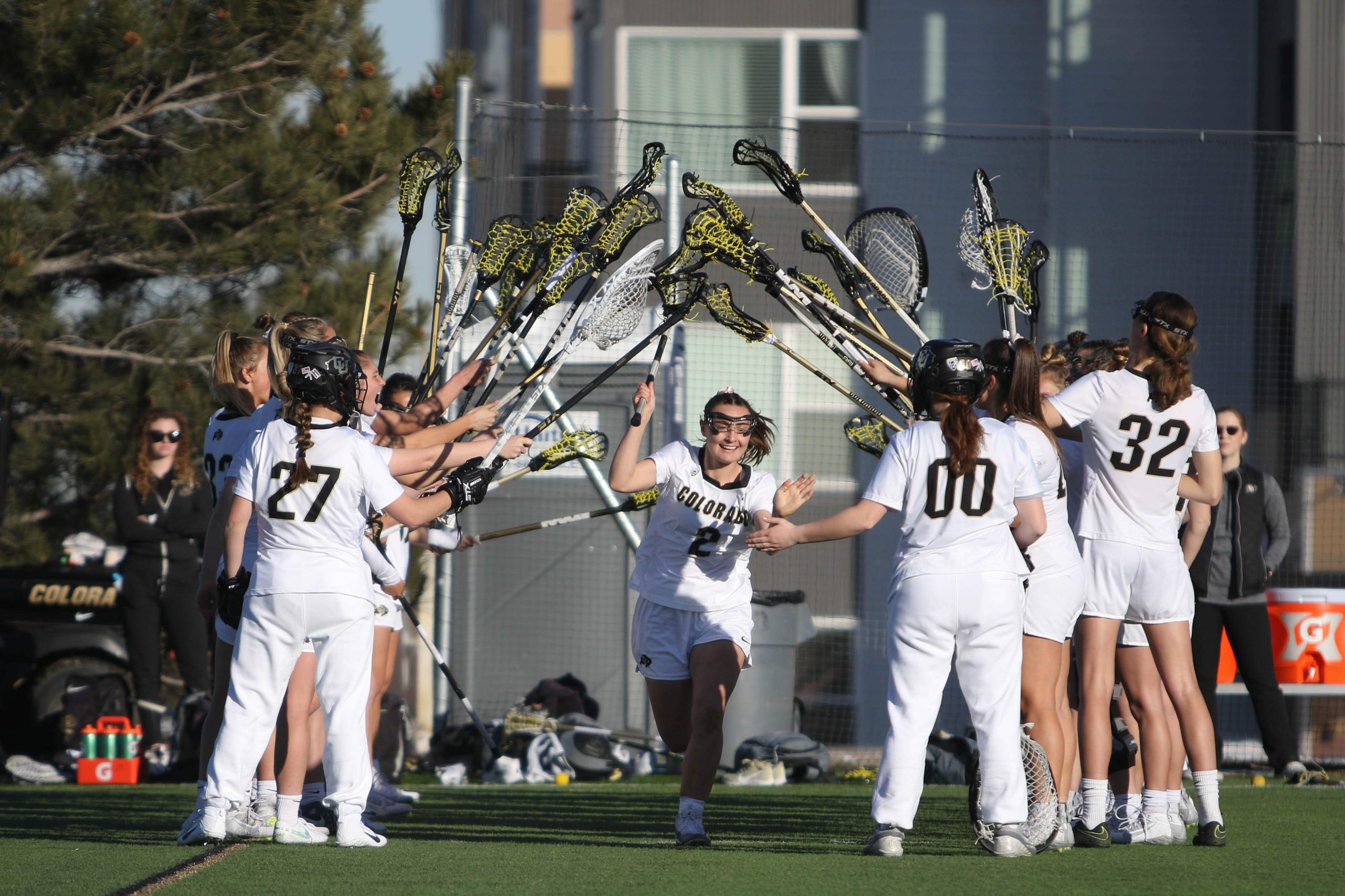 Junior defender Macaul Mellor runs through the tunnel as she gets announced before the game at the Kittredge Field. Feb. 21, 2020. (Kara Wagenknecht/CU Independent)

The University of Colorado Boulder women’s lacrosse team defeated the Harvard Crimson 9-7 in their home opener Friday. After falling on the road to No. 8 Florida a few weeks ago in their season kick-off, the Buffs got back on track with a win to move to 1-1 this season.

“Every win is incredibly important for us at the end of the day,” said Colorado head coach Ann Elliot Whidden. “We are excited to get it, it wasn’t easy for us and we made things a little bit difficult but for this team, as we are growing, every win and every little bit of confidence we can get is important.”

Colorado began fast, dominating possession and keeping the ball in the attacking third for nearly the first ten minutes of the game, generating several shots that were handled by Harvard junior goalkeeper Grace Rotondo as she turned away shot after shot seemingly with ease.

The Buffaloes kept up the pressure and eventually broke through, scoring a goal with 21:30 left in the half. Freshman attacker Charlie Rudy earned the goal with an assist from sophomore attacker Chloe Willard to give the Buffs a 1-0 lead.

“It definitely felt really good, it was our home opener so it was really exciting to win,” said CU junior attacker Sadie Grozier. “Knowing that we were so close against Florida and just couldn’t finish at the end, that was really the only thing that was on our mind going into this game, so we just wanted to pull through and win at home.”

Soon after Rudy’s goal, the Buffs really opened the scoring, putting three goals into the back of the net within two minutes and pushing the lead to four. A goal by sophomore midfielder Liz Phillips and another goal by Rudy extended the Colorado lead. Willard also tacked on two more assists to push her total to three on the day just 20 minutes into the game.

“Assisting is something that we have worked on this year in order to be more dynamic on offense because in years past we have just focused on dodging,” Grozier said. “Just being able to get more people involved in hitting assists is really awesome, when every single person is a threat it makes the whole offense better.”

Colorado continued to push unapologetically, scoring another two goals within one minute of play. The first of the goals came off the stick of Grozier after a stunning pass into the middle from Phillips. Grozier ripped a shot into the top left corner of the net to push the CU lead to 5-0. Less than a minute later, Rudy scored her third of the day to complete her first-half hat-trick with 11:12 left in the half.

“Our team is built on everybody stepping up and I thought we did a good job of that,” Whidden said. “We just got to get better at playing 60 minutes, we fell off and lost a little bit of confidence and we just have to be able to bounce back and respond.”

Harvard finally managed to break the shutout after 20 long minutes with a pair of goals. The first was an unassisted goal by junior midfielder Tessa Queri with 10:29 left followed immediately by a goal by senior attacker Hannah Keating and cut Colorado’s lead to four. Rudy snuck one more in for Colorado with 25 seconds on the clock to give the team a five-goal lead headed into the half.

Defensive play from Colorado and a heavy offensive push by Harvard characterized much of the second half as CU tried to maintain the lead and the Crimson tried anything to get back into the game.

Harvard opened up the half with back to back goals, getting the attention of Buffs fans who just saw a five-goal lead slip to three in just a few minutes. The Crimson kept scoring to keep it close but each time Colorado responded to keep a moderately comfortable three-goal lead. CU held an 8-5 lead with 15 minutes left in the game.

With 11 minutes left, senior goalie Julia Lisella made an incredible stop to keep the three-goal lead for CU. She would go on to finish the game with 10 saves. Immediately after that save, sophomore midfielder Kate Burnside scored another goal to make the score 9-5 which gave CU some breathing room.

“We struggled a little bit down the stretch and our defense was able to keep us in the game,” Whidden said. “Julia (Lisella) had another great game for us which was huge and as we turn to Michigan we know we are playing a great team that’s very successful and very well-coached. We are going to have to turn it around quick here.”

Harvard would score two more goals before the final whistle blew but it never got close enough for Colorado to panic.  The Buffaloes won 9-7 and recorded their first win of the season.

Up next, Colorado faces No. 14 Michigan which should be a difficult task for the Buffs on the road.

“Michigan is a great team so we just have to make sure we are taking care of the ball every single time that we get it, especially winning it off the draw,” Grozier said. “We have to do a better job at maintaining long possessions because they play quick so we have to play at our own pace.”

Colorado will have little to no rest as they travel to Ann Arbor to take on the Wolverines this Sunday, Feb. 23 at 10 a.m. MST. 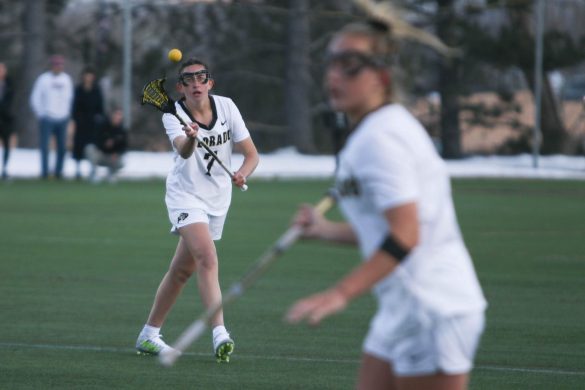 Sophomore midfielder Kasey Braun receives a pass during the second half at the Kittredge Field. Feb. 21, 2020 (Kara Wagenknecht/CU Independent) 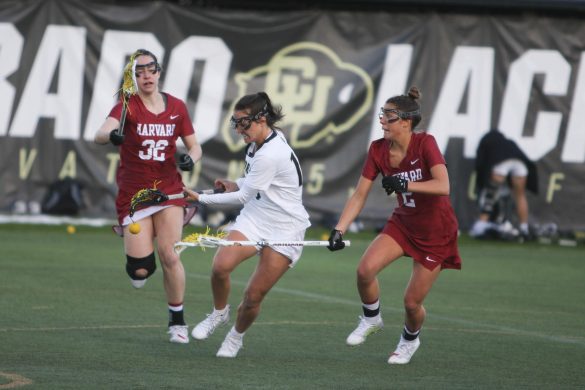 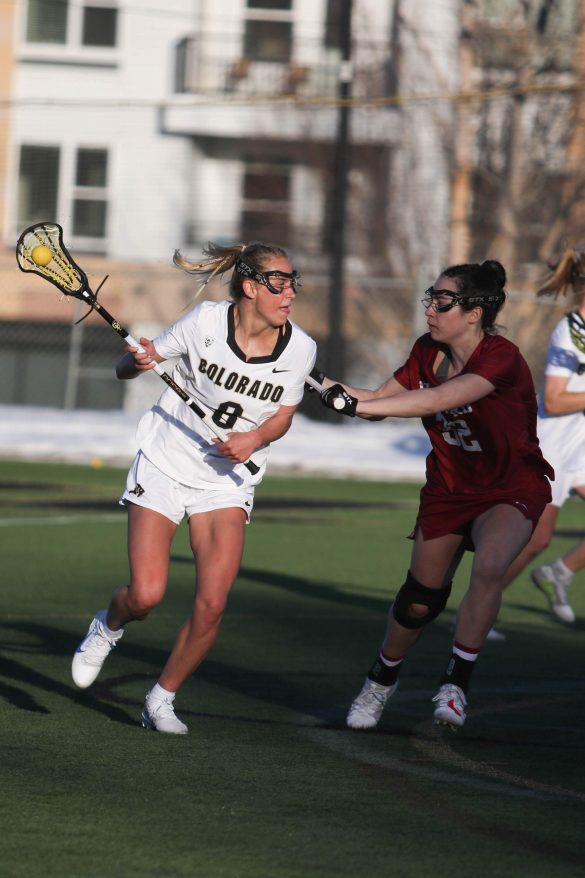 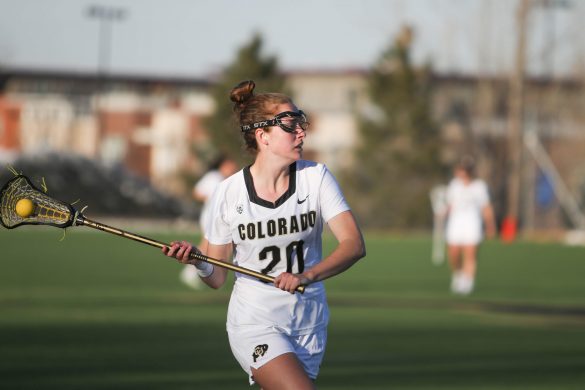 Senior midfielder Anna Collawn passes the ball to a fellow Buff during the first half at the Kittredge Field. Feb. 21, 2020 (Kara Wagenknecht/CU Independent) 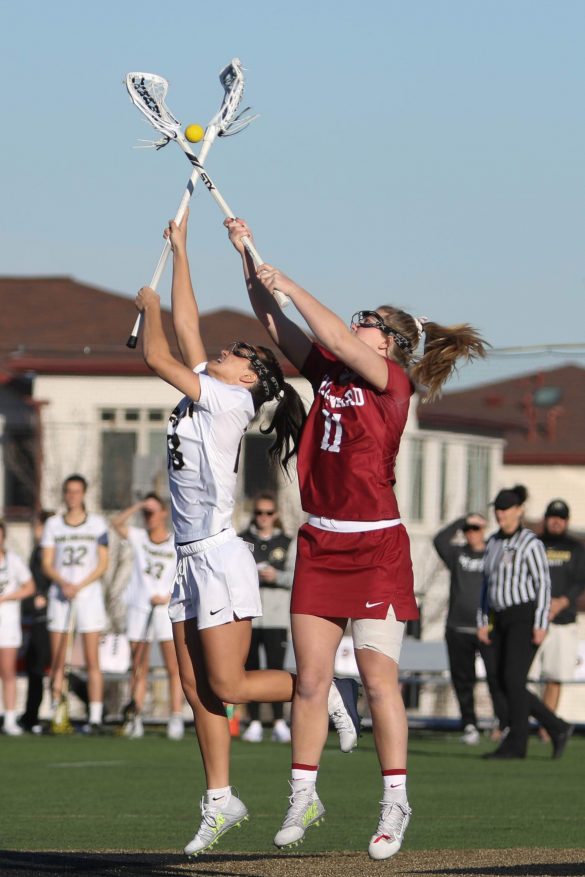