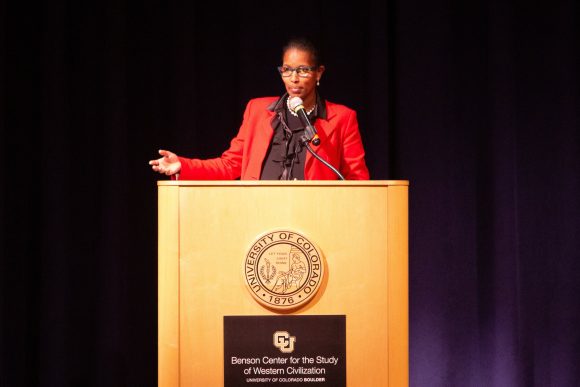 Hirsi Ali founded the AHA Foundation in 2007, a foundation that promotes the liberty to “challenge the ideology of Islam” and aims to protect women from female genital mutilation, honor violence and forced marriages. Born in Somalia, Hirsi Ali moved with her family throughout Eastern Africa and Saudi Arabia, eventually coming to the Netherlands as a refugee.

Hirsi Ali’s speech, entitled “The Market for Victimhood,” articulated the success that comes from overcoming the innate human tendency of tribalization, or the organization of people into separate tribes.

Hirsi Ali began by acknowledging the 75th anniversary of the liberation of Auschwitz. Commenting upon our current era, Hirsi Ali asked, “Don’t we have it right? Aren’t we blessed?”

“What my clan can get, we don’t share with the other clan. In fact, we designate the other clan ‘the enemy’ — we’re hostile to them,” Hirsi Ali said, expanding on her personal experience with community dysfunction between clans. It is this mentality—every clan for itself—that she deems tribal. 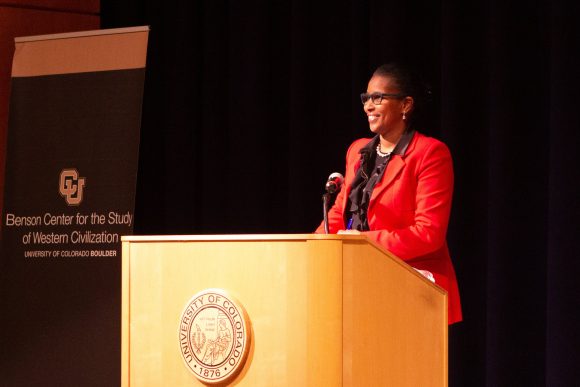 Hirsi Ali shifted to discuss the victim mentality, connecting it directly with tribalization. She described how young people in Somalia were taught to resent their oppressors.

“If that’s the story, then what are you going to get?” she asked the audience. “You’re just going to do it to them.”

She discussed the conflict in Somalia explaining that in 1991 the people who demanded change came to hold it, but had no plan “beyond vengeance.”

“They did it to us so we’re doing it to them,” Hirsi Ali said. “The cycle goes on and on.”

“How do you transcend that level of tribalism in such a short time?” asked Hirsi Ali in response to her arrival in the Netherlands and America. Tribilization, Hirsi Ali explains, is human nature. We owe our success and security to this feat of transcendence, Hirsi Ali said, but with a fear of the return to tribalism.

Hirsi Ali ended her talk by highlighting the First Amendment and why society needs such a law. She explained that the freedom of the press and of speech are key issues to consider when fighting tribalism, but worries that the amendment is being dismissed.

“What I see us do now in America on our campuses, in our politics, in our corporations in our newspapers, in our media relating to the rest of the world: it’s like we seem to be hungry for a tribalism,” Hirsi Ali said. “Please, let’s not do that.”

Hirsi Ali opened the floor to questions and was met with a broad range of individuals and political persuasions. The discussion turned to her issues with Islam—as she has famously rejected the faith—noting her experience with hate and violence in its name. She specified that she sees Islam as “unreformed,” saying that it “requires you to believe without critical thinking.”

These words were met with some opposition among Muslim members of the audience. A few students from the Muslim Student Association emphasized their opposite experience of Islam.

Several students expressed their concern regarding Hirsi Ali’s use of primarily her own experience. They said the Islam they know is a peaceful one.