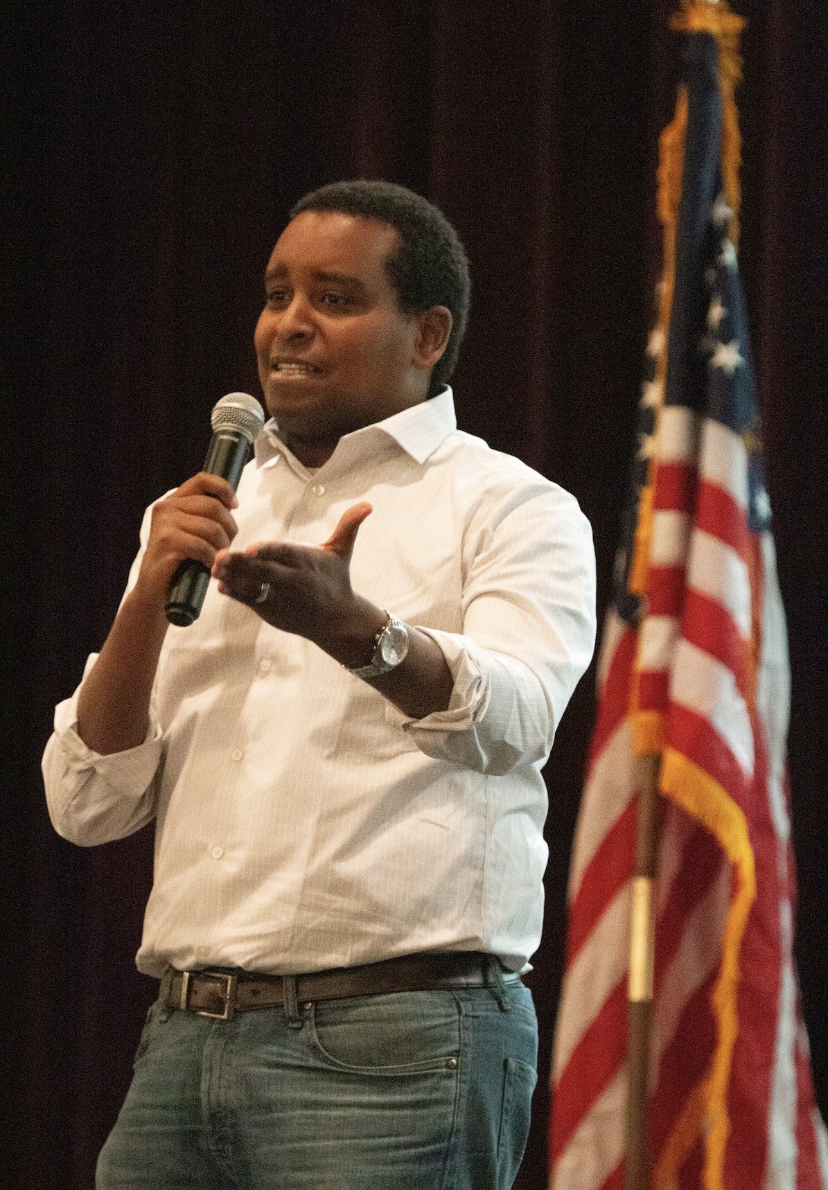 He began by thanking the audience for being “active participants” in democracy, noting that the district was tied for the highest voter turnout in the United States during the 2018 midterm elections.

He then went on to discuss the issues most important to him and what he has tackled while in Washington, D.C. Neguse highlighted climate change, which he called the “defining issue of our time.” Neguse was an early cosponsor of the Green New Deal, a package of resolutions sponsored by Rep. Alexandria Ocasio-Cortez (D) and Sen. Ed Markey (D) aimed at addressing climate change and economic reform in the United States.

Neguse said that when he ran for a seat in Congress, climate change was a key issue he hoped to bring attention to. A third of the bills that Neguse has introduced have centered around climate action.

“The Omnibus Public Lands Bill that we introduced with Sen. Bennet into the senate includes protection for over four hundred thousand acres across our state for some of the most iconic places in Colorado,” Neguse said.

He said he hopes to protect scientific integrity and wants to stop climate change censorship so that facts around the issue are more publicized.

“A number of studies have been done,” Neguse said. “We know that the very short runway is getting shorter by the day.”

Neguse later turned to the issue of impeachment and weighed in on what he thought of the ongoing Senate trial of President Donald Trump. Following House Speaker Nancy Pelosi’s announcement of an impeachment inquiry into Trump, Neguse quickly became a leading voice amongst House representatives to impeach the President for what he saw as abuse of power, an allegation which came after Trump allegedly withheld military aid from the president of Ukraine in an attempt to force the Ukrainian government into opening an investigation into presidential hopeful Joe Biden. Trump was impeached by the House of Representatives on Dec. 18 for abuse of power and obstruction of Congress.

“I hope they treat it with the sense of urgency that it requires,” Neguse said.

Neguse voted for Trump’s impeachment in the House and said he hopes the Senate will see the importance of the case and evaluate all the evidence of Trump’s misconduct. He said he is offended by how some senators are treating the process.

The congressman also addressed his frustration with the tension between the House and Senate, using bill HR1 as an example. The bill, with seeks to update the country’s voter laws, restore the voter’s rights act and make election day a federal holiday, passed the House but has yet to receive a hearing in the Senate.

“There are so many good ideas that are just not going anywhere because the senate majority leader decided that they won’t,” Neguse said.