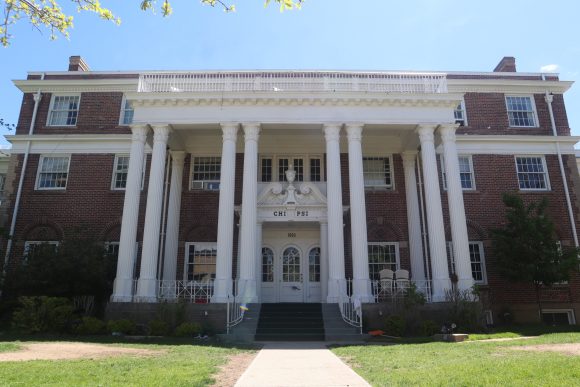 Ever wonder why fraternities refer to themselves as Greek life?

When the Declaration of Independence was read on July 4, 1776, it established a government that assured freedom, consent to be governed, equality and unalienable rights to life and the pursuit of happiness for the American people.

Word of these revolutionary ideas soon came to the College of William and Mary in Williamsburg, Virginia. In response to such passion for political revolution, the first fraternity in the history of the United States, Phi Beta Kappa, was founded.

Historically, names inspired by the Greek alphabet, such as Phi Beta Kappa*, served as a tribute to Western philosophy and the democratic values that initially influenced and continue to mold American political thought.

Historic fraternities aimed to cultivate a space for students to challenge themselves intellectually and discuss positive political change outside of the classroom. These organizations were held together by a strong support network that inspired values of community, a code of ethical behavior and true brotherhood.

Fraternity life has since grown far from its roots. Devolved organizations like the ones that exist today betray the term “Greek life” and pervert its founding ideals. At the University of Colorado Boulder, Greek organizations have been responsible for some of the most devastating incidents to the student community. 2019 marks the 15 year anniversary of then CU freshman Gordie Bailey’s death during a Chi Psi hazing incident, an event that propelled the university’s split from many CU fraternities. Beginning in October of last year, several fraternities, including Sig Pi, were under investigation for potentially drugging several female CU Boulder students.

“Fraternity life has since grown far from its roots. Devolved organizations like the ones that exist today betray the term “Greek life” and pervert its founding ideals.”

More recently, Sigma Phi Epsilon departed from the Interfraternity Council (IFC) due to multiple municipal charges including assault, drunk and disorderly conduct and trespassing following a formal hosted by the fraternity.

Fraternity means “brotherhood” in Latin. If current fraternity culture is meant to represent “brotherhood,” its definition has been misconstrued by those at CU. If brothers haze until they’ve killed one another, then either we all misunderstand the meaning of brotherhood or frats are corrupting the word.

According to a 2014 study by the BBC, men who join a frat are three times more likely to commit rape than college males who are unaffiliated with a fraternity. Fraternities seem to encourage a culture of masculinity that degrades women. In an interview with the CUI, a CU student who was raped in a CU fraternity house discussed her experience of sexual assault which was perpetrated by fraternity members. What’s more, all efforts to eradicate rape culture and sexual assault in fraternities are concentrated in short-term programs that don’t have much to show for effectiveness. A 2014 CDC report showed how efforts implemented by these kinds of programs are so brief that they often fail to reduce issues of sexual violence at universities.

But CU has taken some direct initiatives to hold fraternities accountable. In February, the university banned fraternities from renting on-campus spaces after racial slurs were said at the 2018 “Buff Bowl,” a football tournament hosted by Zeta Beta Tau. But racism is still pervasive in fraternity life. Oftentimes, fraternities breed basic in-group-out-group social dynamics, disproportionately admitting white students over students of color into their so-called “brotherhood.”

This is not the end of the list for indiscretions frats are guilty for. Perhaps their social ignorance is unintentional, but it remains complicit in reinforcing social inequalities.

Modern Greek life has also slipped into intellectual complacency. For many CU fraternities, the required GPA for membership is 2.5. This isn’t much above 2.0, the point at which a student is put on academic probation. Fraternities were initially created to provide supplemental education and intellectual stimulation to students. Now fraternities seem to disgrace those values completely. Greek life GPA standards are not an exemplary model for academic achievement. If anything, they are the opposite: fraternities are a stronghold for poor academic performance. In the 2019 spring semester, the highest average GPA for every IFC-affiliated CU fraternity was 2.894.

How can fraternities claim to create young men of “integrity,” “morality,” “justice” and “principle” if the system magnifies prominent social inequalities and encourages only enough academic achievement to escape academic probation?

Some Greek life has the power to transform college students’ social lives by providing a space for intellectual innovation to flourish. One of the oldest fraternities is Kappa Alpha, which was founded in 1825. The organization adopted the saying “Philosophia Biou Kubernetes,” which translates to “Philosophy is the helmsman of life.” Many of these historic frats even included a code of ethics, which contemporary fraternities seem to lack.

Some fraternities (often co-ed) are dedicated to social, service, academic and professional goals, such as the business fraternities Delta Sigma Pi and Alpha Kappa Psi; Theta Pi Sigma, a fraternity working to give minority students a sense of community on campus, and multicultural fraternities like Alpha Kappa Alpha. These frats mirror their founders by offering a network of support both academically and professionally and encouraging the constructive growth of their members via study groups, networking events, tutoring and opportunities for service.

However, these frats are not in the majority and often have fewer members than their more vulgar counterparts such as Sigma Phi Epsilon, Chi Psi and Sigma Pi.

If fraternities want to claim that they represent Greek life today, then they should strive to change oppressive social conventions and provide real opportunities for intellectual growth. If fraternities continue to adopt some fabrication of Greek identity that devalues the founding ideals of our nation, then they simply cannot call themselves “Greek life.”

*Phi Beta Kappa is an advertiser with the CUI and this content is unrelated.

Vayle Lafehr is a Sophomore at the University of Colorado Boulder where she studies Neuroscience and Philosophy. She is the head opinion editor and a staff writer for the CU Independent. Vayle enjoys calling attention to a variety of issues that affect CU students.