Opinion: Something to be thankful for 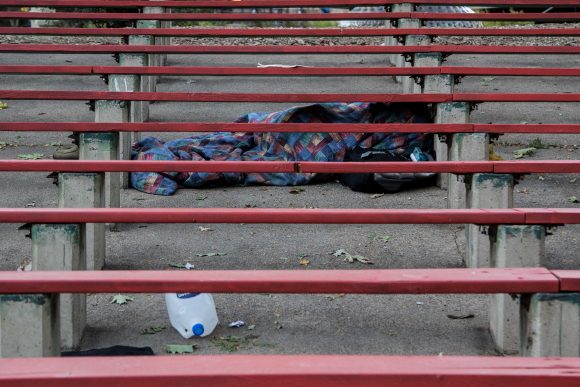 What are we celebrating when we celebrate Thanksgiving? Sure, we know the story – pilgrims celebrated surviving their first-year thanks to the friendly Wampanoag tribe and the formerly-enslaved Squanto – but what does it mean for us?

In addition to acknowledging, and making amends for, our history of genocide against the indigenous population, from the numerous “Indian Wars” in colonial days to the Trail of Tears in the 1830s to our local history of forcibly taking lives and land from the local indigenous tribes (which is an article for another time), we should learn from the Wampanoag and help those in need, simply because they are in need.

Even here in affluent Boulder, hundreds of people, including hundreds of youth, experience homelessness all around us.

The City of Boulder does have homeless shelters, but it’s inadequate. First off, the shelters aren’t homes, but rather places where people experiencing homelessness can stay for the night. Secondly, one of these shelters is “Severe Weather Shelter” which will only open if freezing temperatures and/or winter precipitation is expected ahead of time. Thirdly, folks can be banned from shelters for things as small as frustratingly tapping their hands on a window. When you have nowhere else to go, this might as well be a death sentence.

After being refused entry to a shelter due to this minor act of frustration, Benji Harvey froze to death on Christmas Eve, 2017. While Boulder children woke up to fancy new presents and Boulder parents woke up to a day off work, the Boulder sun rose on a man who died from the elements because our city didn’t care enough to shelter our most vulnerable. At least 17 other people experiencing homeless died in Boulder in 2018, according to the Daily Camera.

If the Wampanoag could help the colonists who showed up unannounced on their shore, can’t we take care of our own who need help?

Odds are you can’t afford to buy someone in need a house (but if you can, you should). You can, however, petition the City or County to put more resources into housing those in need, preferably with permanent housing, and not simply nightly shelters.

In 2014, thanks to a partnership between Boulder County and Boulder Housing Partners, 1175 Lee Hill opened as a permanent housing solution. Despite significant criticism from neighbors, the Camera reports that “1175 Lee Hill has generated zero neighbor calls to police, zero complaints to Boulder Housing Partners and accounted for zero police arrests during the period.” Instead, many folks have had their lives turned around. This cost less than half as much as would otherwise have been spent “per homeless resident for emergency room, jail, court and shelter costs,” according to the Camera.

Although the housing crisis cannot be fixed by individuals alone, as individuals we can make a difference in people’s lives by giving gloves, coats, hats and money. Yes, money. As our friends across the pond at the New Statesman put it, “Apathy and austerity kill. Your kindness saves lives.” I recognize that not all of us can give directly every day. But those of us who are financially stable enough to order delivery, or to go see movies in theaters, or to fly home for the holiday, we really have no excuse.

Want to do more, but not sure where to begin?

Safe Access For Everyone (SAFE), is a community organization dedicated to creating  “a more just and equitable place for us all“ through direct community aid. SAFE doesn’t just say things, it acts. On Saturday, Nov. 30, it’ll be hosting a Friendsgiving Community Meal, where it will give both food and supplies to keep folks warm to those in need. You can help with a simple donation here.

Sadly, it’s not just folks near our campus who are in need of sufficient nutrition – members of our student community also experience food insecurity.

Even after a damning article on hungry CU students in the Camera last December, CU still hasn’t done the work to figure out how many on our campus are food insecure and has yet to join nearly all other colleges and universities in Colorado in creating a brick-and-mortar food bank. Still, to its credit, the campus does have some valuable services for those in need, most notably through various emergency food boxes. There is no shame in needing help and we should do what we can to spread the word about these resources and support them directly, when possible.

Again, individual charity is needed and helpful, but it cannot be enough. As long as we have a society where some go hungry, and some have no stable housing, our work cannot be done. There are more far more empty houses than unhoused people in America. According to the FDA, the U.S. wasted “approximately 133 billion pounds and $161 billion worth of food in 2010.”

And let’s not forget how much food we’d save if we didn’t have to feed so many animals. If we’re taking the day to give thanks for our good fortune, the least we can do is not cause significant suffering by slaughtering tens of millions of feeling, thinking creatures.

Enjoy yourself this Thanksgiving. Celebrate with friends and family. Give thanks for whatever good fortune has come your way. Just remember that the best way to give thanks is to give someone (or something) else something to be thankful for.