Opinion: Students’ votes are more important than you think 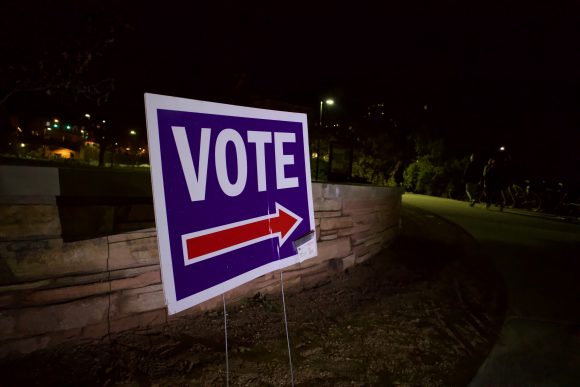 A sign on campus points towards a polling station in the UMC. Nov. 5, 2019. (Robert Tann/CU Independent)

With the 2020 election rapidly approaching, the need to vote is more pressing than ever. Important issues such as climate change and gun control are major topics of debate, making this election pivotal for our nation.

This is especially relevant because, as college students, many of us will be voting in a general election for the first time next year. It’s the first chance for many to participate in the democratic process and it’s also a major moment for college-aged adults to develop individual political beliefs, which may differ from how they grew up. Research suggests that college broadens students’ political views which, in turn, allows students to more effectively make political decisions on their own.

According to a 2018 poll by the Pew Research Center, roughly three-quarters of Americans reported that voting in elections classifies what it means to be a “good citizen.” Despite this, annual voter turnout in national elections barely climbs above 63%. In the past three years, it’s almost undeniable that we’ve witnessed a variety of challenges to the democratic system. Among these are increasing limits on the freedom of the press and limits on freedom of speech. If not for any other reason, you should vote to exercise the rights of a democracy.

” Important issues such as climate change and gun control are major topics of debate, making this election pivotal for our nation.”

Additionally, politicians are people who have built entire careers off of paying attention to people who vote. This allows them to make decisions that are in the best interest of their constituents. Donors also pay attention to people who vote. It’s because of donor support that politicians are able to more effectively champion legislation in favor of, you guessed it, their constituents. That’s why there is such an enormous economic engine behind political-action groups and other organizations that participate in campaign-finance spending. They know that influencing voters is important because, again, votes matter.

For CU students, and students across universities in the U.S., voting is especially relevant because of the knock-on effect local elections have. CU President Mark Kennedy was met with weeks of student outcry when he was announced as the sole finalist for the position by CU’s Board of Regents in April of this year. While Kennedy himself was not elected by voters, the regents who appointed him were. If students disagreed with the choice the regents made, they can take that up at the ballot box.

Likewise, we have the ability to make an even more localized impact on campus by voting in student government elections. Unfortunately, this fall’s election for CU Student Government saw a turnout rate of 3%.  Often it makes sense to distill this importance through an economic lens. Follow the money. CUSG controls a budget of $24 million. If students are not voting and weighing in on what’s important to the student body, money is allocated to campus entities that may not appeal, cater, support or empower students. And that’s just a waste.

There was also low turnout in Boulder local elections. This is unfortunate because there are many issues at stake in local elections, like taxation and the appropriate allocation of public funds.

Older Americans are significantly more likely to vote and dump their agendas on younger generations. This means that we also have a generational obligation to vote because if we don’t, there’s the possibility that we could live in an ideologically old world. This could be problematic because it can restrict the process of positive change within our democratic institutions.

Here are three motives to vote:

The past: It’s a way to say thank you and honor the legacy of a country that was built by people who not only fought for the right to vote but the right to have a voice. This includes the Civil Rights Movement, the Women’s Suffrage Movement and even the military, who fight to secure our right to vote.

The present: Let’s be a generation that defies the stereotypes of political apathy and a lack of engagement in the democratic process.

The future: In the past week, a CU-led panel of internationally renowned climate scientists made remarks that they were highly concerned about climate change. They were as equally hopeful about the future because of our rising generation and our commitment to ideals. However, they said that true action for the Earth needs to arise from political change.

Voting is a chance for our generation to make its mark and to be on the right side of history through enacting change that is positive for our country in both the short and long-term. No one wants to look at their future relatives and, when they speak of the past, tell them that they didn’t vote because they just “lacked interest” or motivation.