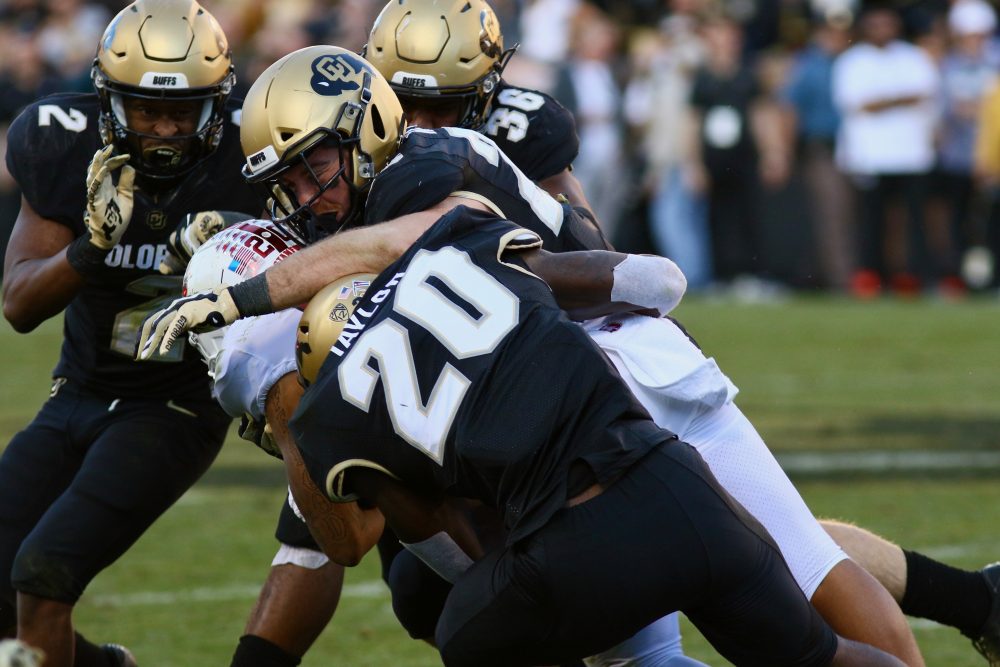 The Buffs’ defense stuffs a Stanford defender during the fourth quarter of play at Folsom Field. Nov. 9, 2019 (Nigel Amstock/CU Independent)

The Colorado Buffaloes football team (4-6) took down Stanford (4-5) to pick up their first win since defeating Arizona State in CU’s Pac-12 opener in mid-September. With this win, Colorado moves to 4-6 on the season and remains bowl eligible with just two games remaining.

Many things went well for Colorado, specifically, CU’s defense and the running and kicking game. Colorado’s lead back, Alex Fontenot, led the team in rushing with 95 yards on 18 attempts with a 5.3 average carry.

On the kicking side of things, redshirt freshman Evan Price knocked three field goals through the uprights, including the game-winner as time expired in the fourth quarter.

“I was really happy to see it go through,” said Colorado head coach Mel Tucker. “It was an outstanding moment for him. That was something that doesn’t happen often, to get a walk-off field goal like that, the first time (for CU) since 2007 against Oklahoma.”

While both running and kicking helped propel CU to victory, at the end of the day, the defense proved to be the true difference-maker. For the first time all season, Colorado held their opponent to under 30 points, which topped their next best defensive performance on the year by 17 points.

“In order to play good defense, you have to hold people to low numbers,” Tucker said. “The most important stat is scoring defense. To hold a team to 13 points or less is really our goal. We played probably our best defense of the season in that regard. Guys continue to chop wood, play hard, be physical and have relentless effort.”

A few defensive players for CU stood out in particular: senior outside linebacker Davion Taylor, grad student safety Mikial Onu and junior safety Derrion Rakestraw. Taylor led the trio with eight total tackles, two of which were for losses as well as one pass break up. Rakestraw ended the game with four total tackles and Colorado’s lone interception and Onu finished with five tackles.

“They just played really well,” said Stanford head coach David Shaw of Colorado’s defense. “They had a couple of deals where they ran some stunts up front and we didn’t do a good job picking them up.”

Junior defensive end Mustafa Johnson and sophomore defensive end Terrance Lang each only had two total tackles, but one of each of those came in the form of a sack. Both sacks came in the third quarter on back-to-back plays and gave CU the ball back when Stanford punted shortly after the second sack.

As a whole team, Colorado’s defensive unit had it going on. CU held Stanford to converting only 3-of-10 third-down attempts as well as 0-3 on third down attempts when five yards or closer to the first down. This was a big departure from last week when Colorado let just under half of UCLA’s third-down attempts go for first downs and allowed the Bruins to score on all three of their red zone opportunities.

“It is huge for our mindset and for the confidence of this team,” said junior inside linebacker Nate Landman. “This game is going to be able to boost our confidence going into this bye week and into the next week. I’m proud of the way the defense played today.”

Though CU played much better defensively than in past weeks, one aspect of the game, penalties, continued to plague Colorado. CU ended the game with five penalties for 45 yards, which is better than most weeks but still not ideal. One of those penalties came on a Buffs punt which Stanford ended up muffing and CU recovered. However, since a penalty got called, CU had to punt again, and the turnover was negated. Executing correctly on plays like that will be crucial going forward as CU possibly could have turned that drive into points.

Mistakes aside, Colorado got it done in the end and put their five-game losing streak to bed and wide receiver Laviska Shenault Jr. couldn’t have been happier.

“When that field goal went in, I was like ‘thank God, finally,’” Shenault Jr. said. “Everybody in the middle (of the field) was celebrating and I was on the sideline like, ‘finally.’ I think this will help the team, big time.”

Colorado will enjoy a second bye week before hosting the University of Washington at Folsom Field on Saturday, Nov. 27. Time TBD.