Women’s cheer team soaring to Shanghai, nationals and beyond 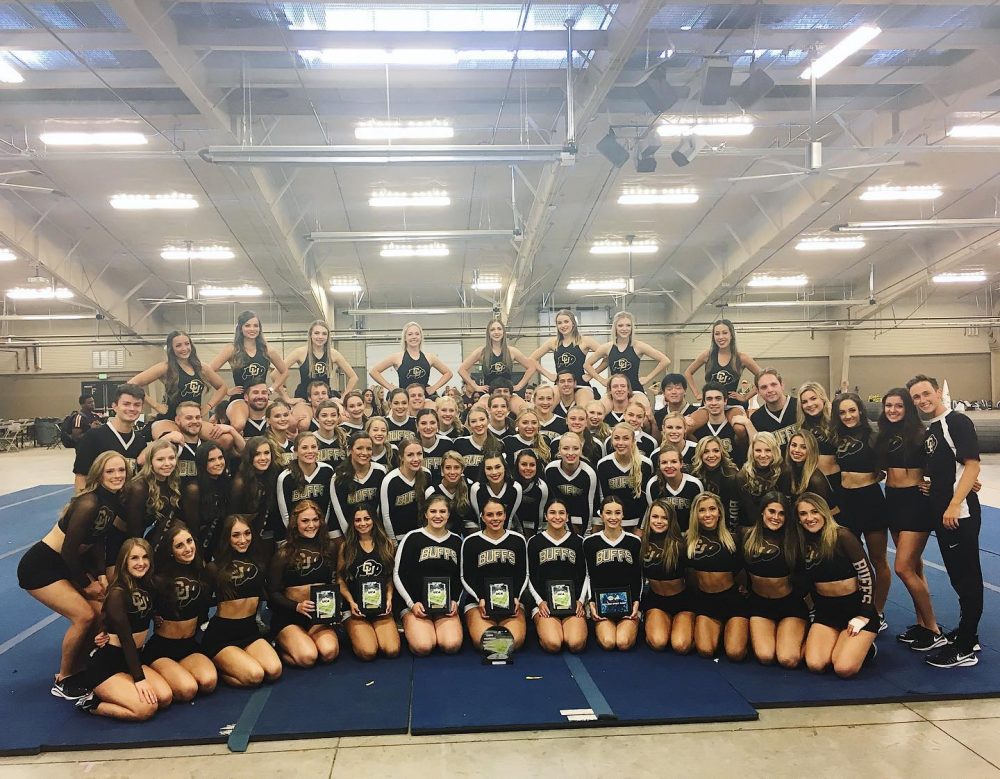 Ashley Rowley spends up to 18 hours a week dedicated to her sport. She’s either up early or late to fit in time for homework and rarely has the luxury of free time. If you have been to any Buffaloes athletic event, odds are you have either seen Rowley or some of her teammates of the women’s University of Colorado cheer team.

Cheer is maybe the most visible of all the CU athletic organizations. Between the two branches, a co-ed team and a women’s team, they are seen showing their support at all CU sporting events. The women’s team, for which freshman Rowley is a base, is made up of 24 members. Despite being present at games, stampedes, Homecoming events and more, cheer gets little recognition. However, the team will be quick to point out joining cheer is more about representing CU than about accolades.

“We sign up because we love to support our university and the athletes here,” said senior Allison Lisowy. “Getting recognized isn’t really part of the job description and we all know that when we try out.”

But that doesn’t hold the team back from preparing for their time in the spotlight as they are preparing for their nationals showcase in January. The team has their sendoff showcase on Monday, Jan. 13, where all the teams in the spirit program perform the routines they will compete with at the national competition. Even Chip, CU’s mascot, performs his competition skit.

“We sign up because we love to support our university and the athletes here.”

“It would be super cool to have football, basketball and volleyball players come out and support us because we cheer them on and are their biggest fans all year long,” Lisowy said.

Unlike most sports, cheer is a year-round commitment. There is no offseason or break. From the first games in the fall to the very last of the spring, cheer is there and working hard all the time in between. With a commitment of this size, the members of the women’s cheer team must do a balancing act between school, cheer and extracurriculars.

“If I’m not doing something with cheer I’m doing homework or putting in time with Chi Omega,” Rowley said. “Balancing my time can be very hard and stressful because I don’t really have any free time.”

Like other teams at CU, cheerleaders sacrifice large parts of their break. In order to prepare for nationals in January, the women’s cheer team only receives four days off for winter break. However, unlike other CU teams, cheer is not designated as an actual team and instead they are considered to be volunteers.

Each semester the women need to log ten appearance points to remain on the team. The team members can receive appearance points by showing up in uniform at community or private events such as 5K runs and bar mitzvahs. The spirit program then gets paid for these appearances. Activities like these are what differentiate cheer from other sports and distinguish them as volunteers.

While not having the official title of an athlete can be tough, members say there are upsides to cheer’s volunteerism.

“It kind of goes to our advantage that cheer isn’t technically called a sport because if it was we would have to limit ourselves to just one season which we really can’t do,” Lisowy said.

Lisowy has been on the team all four years of her time at CU. On Saturday, Lisowy has the unique opportunity to travel to China with the CU men’s basketball team for their first Pac-12 game. While there, Lisowy and another volunteer from cheer and two members of the dance team will make appearances and host clinics around Shanghai, tour a massive Starbucks and take part in a parade at Disney.

“When you talk about getting recognized, being able to go on amazing trips like this is really another form of recognition,” Lisowy said. “We are so grateful that we get this opportunity.”

While both Rowley and Lisowy spend countless hours a week dedicated to their sport, sometimes at the sacrifice of other activities, they say the payoff has been worth it.

“I decided to cheer at CU because I knew I wasn’t ready for my cheer career to be over after high school,” Rowley said.

Lisowy cannot imagine her college experience without cheer being a part of it.

“My life has literally revolved around cheerleading the last four years,” Lisowy said. “Even though it can be excruciatingly painful sometimes, I would not change it for the world.”