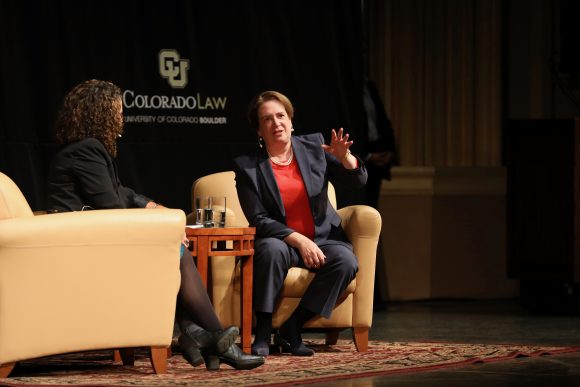 Kagan used her own journey to emphasize the importance of flowing with life’s curb balls. Kagan joined the Supreme Court in 2010 after being nominated by then-President Barack Obama following her career as an academic law professor and first female dean of the Harvard Law School. She is the fourth female justice to serve on the Supreme Court.

“I loved the kind of analytic rigor that law school demanded,” Kagan said. “This was a way to make a difference in the world.”

Kagan had one piece of advice for students who already know they want to enter law: Use law school as a place to find passion. Forget the plans, she said. Students should instead keep their options open. That’s when the best things will happen in a legal career, Kagan said.

“I am a big anti-planner,” Kagan said. “People should try to use law school as an opportunity to experiment in different things.”

“I loved the kind of analytic rigor that law school demanded. This was a way to make a difference in the world.”

Kagan explained that there have been times when reviewing a case that she realizes she does not know very much about the type of law it works in. When she receives these cases, she often remembers the advice the former Supreme Court Justice John Paul Stevens, who Tuesday’s talk was named after, gave her. She was told that every day is a chance to learn something new. It is a principle Stevens applied to his 35 years on the court and one she said she tried to emulate.

Kagan took Stevens’ place on the Supreme Court when he retired in 2010. She considers Stevens a historical legacy and personal hero. Stevens died in July at the age of 99.

“What he did will go down in history for is a deep commitment to the rule of law,” Kagan said. “He was a man of extraordinary brilliance.”

The court is tasked with interpreting the constitution and upholding the rule of law regardless of politics, Kagan added. She said that with the 5-4 decisions that appear in headlines, the courts sometimes appears to have a conservative majority, but added that most justices usually find common ground.

Kagan said that many people look at the supreme court and think a lot of decisions are split, but the numbers don’t bare that out. About half of the rulings the court makes each year are unanimous. Another portion of the cases have only a few justices dissenting, Kagan said.

“We live in a polarized time and the last thing the courts should do is to look as polarized as every institution in America,” she said. “It is important for the public to recognize that we are a different type of institution.”

While Kagan does not think the judicial branch has changed based on what has happened in the legislative and executive branches of government, she said long term changes could happen. Based on what is happening in the political process over decades, justices may change the voice they take in writing opinions, said Kagan.

“I think we should look after our own business,” Kagan said. “I don’t think the court should define its own role based on the fluctuations in what happens in the executive and legislative (branches).”