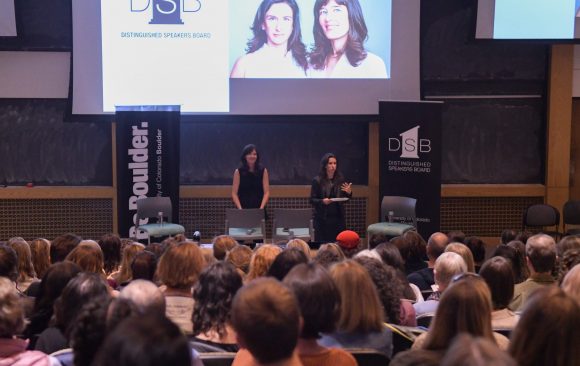 The New York Times journalists Megan Twohey and Jodi Kantor remember the day Harvey Weinstein appeared in full force with a team of lawyers to force the reporters to halt their explosive story on Weinstein’s decades of sexual abuse. Speaking to a packed audience at the University of Colorado Boulder Monday night, Twohey and Kantor retold their story of reporting on the now-disgraced former Hollywood producer and how decisions were made at the “11th hour.”

A day before the article was set to publish, Weinstein walked into the lobby of the New York Times building trailed by a team of lawyers including Lisa Bloom, a well known civil rights lawyer who prior to defending Weinstein was famous for defending sexual assault victims. Twohey and Kantor debated what to do. Until then, they had refused to speak with Weinstein off the record.

“Do we let him up to the newsroom?” Twohey said. “Ultimately we decided that we would. At this point he was coming at us with lawyers, he was threatening to sue us, and he was employing a lot of bullying tactics that I think have worked for him in a lot of other places. But this was an opportunity, I wanted to show him face to face what we were made of and who we were. I wanted to go toe to toe with him.”

Twohey and Kantor’s bombshell investigation exposed Weinstein for years of sexual assault against women who he paid to keep silent. Their reporting, coupled with an explosive New Yorker article, helped fuel the #MeToo movement founded by sexual assault survivor and activist Tarana Burke and led to a growing list of accusations against powerful men.

Weinstein had threatened to ruin the careers of anyone who spoke out, according to Twohey and Kantor. But that did not stop actresses Ashley Judd and Rose McGowan, who made the decision to be identified in the first article Twohey and Kantor published. The reporters said the gravity of the risk Judd and McGowan took to speak publicly inspired more actresses such as Gwyneth Paltrow and Angelina Jolie to publicly come forward with their own stories.

“I wanted to show him face to face what we were made of and who we were. I wanted to go toe to toe with him.”

But the reporters faced other challenges, such as Weinstein’s use of his powerful connections, the reporters said during their talk.

“We had the entire backing of the New York Times behind us but these other more vulnerable people who were making the brave decision to participate in the investigation, we really worried about what some of those types of investigators could do to them,” Twohey said.

Weinstein promised a $300,000 bonus to The Black Cube, an Israeli private investigations firm, if it stopped the Times’ investigation. Twohey and Kantor said they had ex Mossad members spying on them throughout the investigation.

“We weren’t scared for ourselves,” Twohey said. “We were kind of operating under the assumption that we were being surveilled in some way, but we were actually pretty scared for our sources.”

Weinstein had been confident he would be able to stop Twohey and Kantor’s story. At the same time as the Times’ investigation,  NBC was also working on a story on Weinstein but were persuaded by the then Hollywood producer to drop it.

When he heard the news that NBC decided to quash the story, Weinstein boasted in a now-infamous quote, “If I can get a network to kill a story, how hard can a newspaper be?”

“In the 48 hours up to publishing the Weinstein story, at the end of this roller coaster ride squaring off against Weinstein and all his lawyers and all the other tactics he was using to try and halt the investigation at the 11th hour, there were actually stories about our investigation that leaked to some Hollywood trade publications,” Kantor said.

The reporters speculate that Weinstein may have been involved in leaking parts of the investigation as a last-ditch attempt to deter the Times from publishing. Twohey and Kantor said that prior to publishing their article Weinstein once said, “it would make a great movie.”

Two years later, with his companies defunct and facing the possibility of life in prison, Weinstein’s prediction may be coming true. Twohey and Kantor confirmed last night that a movie about the scandal is in the works.