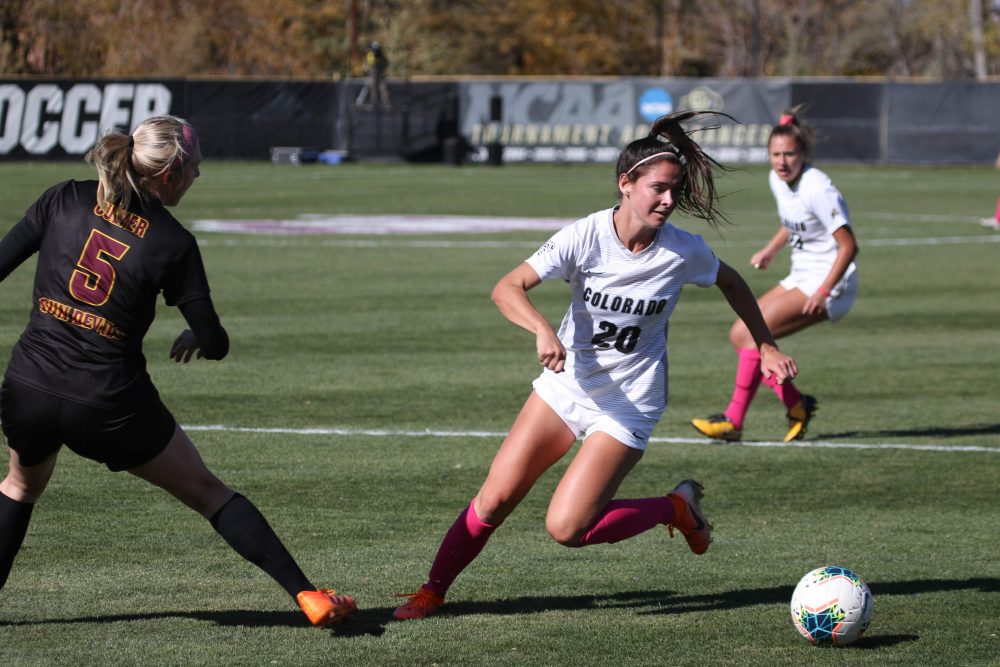 Senior forward Camilla Shymka moves towards a pass during the second half at Prentup Field on Oct. 19, 2019. (Kara Wagenknecht/CU Independent)

A difficult road trip to California last week cumulated in two losses for the Buffs against No. 22 University of California Los Angeles and No. 4 University of Southern California. Last Saturday, senior goalkeeper Jalen “J.J.” Tompkins kept busy versus the Trojans, making a season-high 11 saves in a losing effort.

For the Sun Devils, a matchup on the road against No. 15 Washington State last Sunday ended in a 0-0 draw after two overtimes. Arizona State looked to grab its first win in Pac-12 play against the Buffs on Saturday afternoon.

After suffering two losses on the road to Top-25 ranked teams, Colorado head coach Danny Sanchez knew the importance of getting off to a fast start early against Arizona State.

“Every game in the Pac-12 is like this,” Sanchez said following the win. “It doesn’t matter where you are in the standings. Arizona State is a very good team. It was a great start for us. The way they play, they’re tough to defend and I thought we really did a good job of limiting their clear-cut opportunities.”

Assistant coach Jason Green made defense a priority for the Buffs against the Sun Devils, emphasizing to his players to try and make Arizona State “play negative.” Sanchez said that’s always the goal defensively.

“(If Arizona State) turn and face and make plays, you’re going to be in trouble,” Sanchez said. “So, I thought, for the most part, we did a really good job of that. Even at midfield (we needed to) make them play negative so we can have an opportunity to get people behind the ball.” 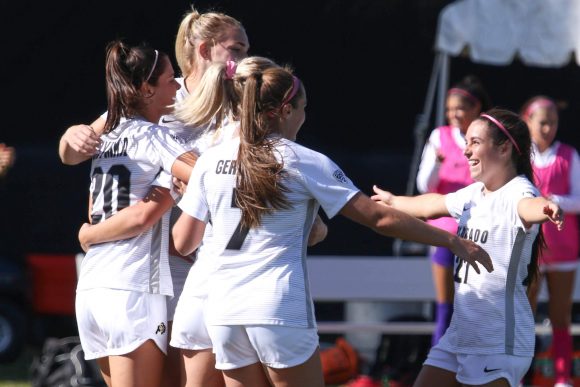 Sophomore defender Hannah Sharts runs up to hug freshman Tessa Barton after she scored a second goal for the Buffs at Prentup Field on Oct. 19, 2019. (Kara Wagenknecht/CU Independent)

Colorado opened the scoring early when Chapa scored her first goal as a Buff unassisted in the second minute of play. The transfer from Illinois played primarily a defensive role for Colorado last season, recording just one shot on goal during her first season in Boulder.

The Buffs generated a couple scoring chances late in the first half. Freshman forward Kyla Ferry received a pass from senior forward Taylor Kornieck and put a shot toward the right corner only to be saved by the Sun Devil keeper.

Early in the second half, Chapa fed a crisp pass to freshman forward Tessa Barton who nutmegged the Arizona State keeper to give the Buffs a 2-0 lead at the 49-minute mark.

“I just kind of saw that I had no pressure on and I just kept dribbling,” Chapa said. “Both center-backs kind of tried to step up to me and I just slid on by and aimed for the net.”

Chapa added that getting off to a fast start after suffering two road losses helped lead to Colorado’s success.

“It was crucial,” Chapa said. “It was crucial to get the W today. We kind of had a rocky last two weekends, so we really needed to come out and play as a team and get one, get a W.”

The Sun Devils responded at the 78-minute mark when freshman midfielder Dai Williams put a shot past Tompkins to cut the Buffs’ lead to one. Arizona State kept the pressure on until the whistle blew but couldn’t get the equalizer.

Colorado escaped with a 2-1 victory. Next up, the Buffs host No. 2 Stanford at Prentup field Thursday, Oct. 24. The match is set to begin at 3 p.m. MST. 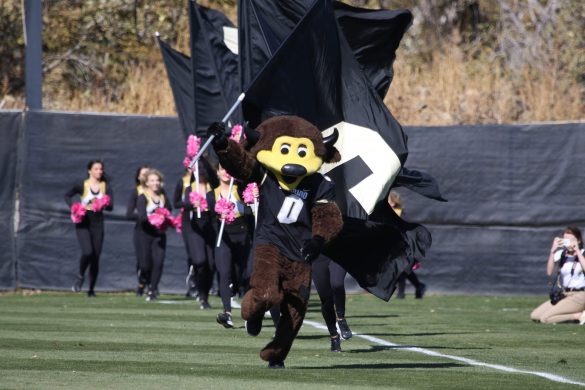 Chip runs along with the spirit squad holding flags that spell out "Colorado" at the start of the second half at Prentup Field on Oct. 19, 2019. (Kara Wagenknecht/CU Independent) 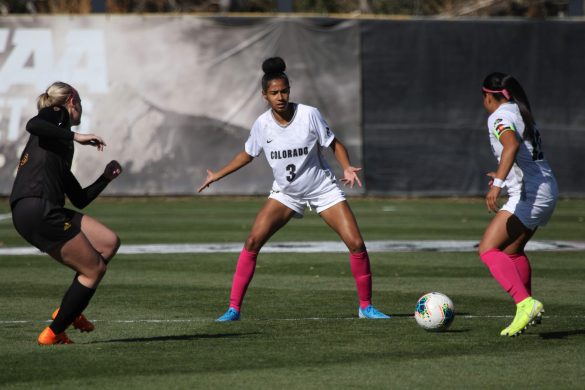 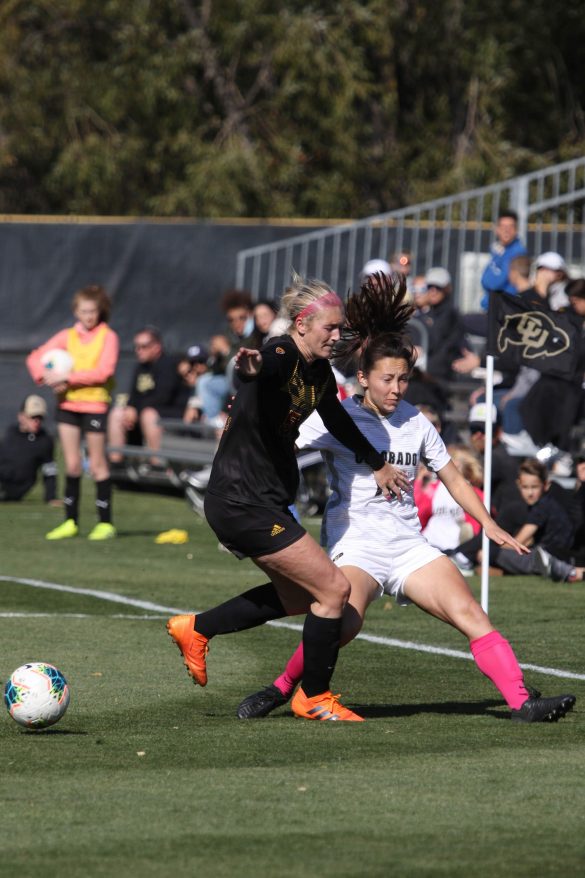 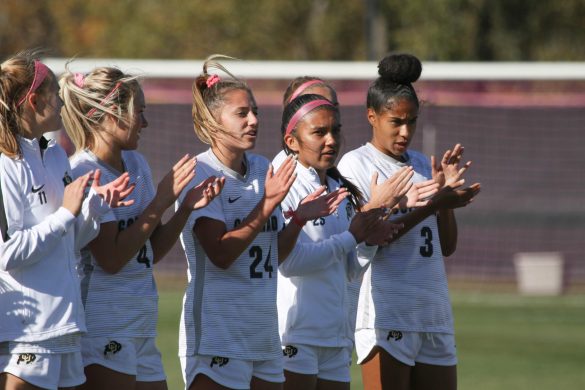 The team faces the crowd as they sing the alma mater after defeating Arizona State University 2-1 at Prentup Field on Oct. 19, 2019. (Kara Wagenknecht/CU Independent) 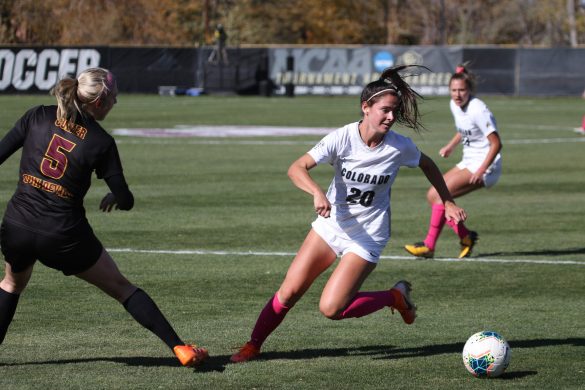 Senior forward Camilla Shymka moves towards a pass during the second half at Prentup Field on Oct. 19, 2019. (Kara Wagenknecht/CU Independent) 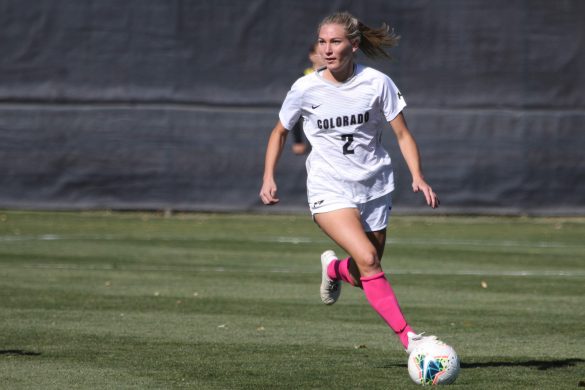 Sophomore midfielder Kayleigh Webb moves the ball across the field at the beginning of the second half at Prentup Field on Oct. 19, 2019. (Kara Wagenknecht/CU Independent)