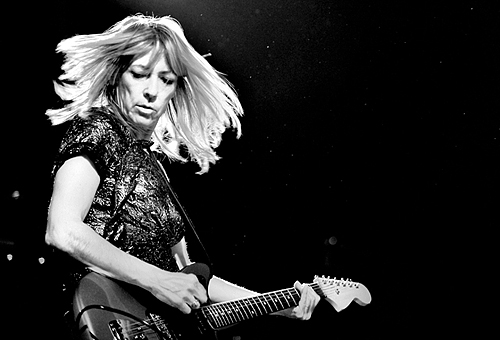 Kim Gordon’s art has never been easy to digest: it is biting, direct and purposeful. The former bassist, guitarist and vocalist for alternative rock band Sonic Youth released he first studio album, “No Home Record,” on Oct. 11. With it, Gordon crafts her own music that fits squarely into her stark, noisy aesthetic.

Following Sonic Youth’s break-up and Gordon’s divorce from her husband and bandmate, Thurston Moore, in 2011, Gordon continued to make music with her improvisational noise group Body/Head. She mixes elements from hip-hop, techno, pop and blues with echoes of Sonic Youth’s avant-garde experimentation.

The lyrics of “No Home Record,” do not follow a clear narrative, opting instead for poignant glimpses of 21st century American life. Many tracks feel fractured without a clear direction, such as “Paprika Pony,” which features an overblown trap beat over which Gordon scatters fragments of sentences.

One of the singles from the album, “Airbnb,” vocalizes Gordon’s fascination with the sterile home decoration of Airbnb hosts. It’s difficult to tell whether she is being sarcastic when she howls “Airbnb / Gonna set me free.” She seems to prefer placing herself somewhere in the middle: “Rustic, romantic / Malibu or getaway / Artistic oasis / You are a plague.” Her strange poetry is underscored by fuzzy, atonal guitar and bluesy basslines, resulting in a song that would be perfect to blast in the car with the windows down.

Some of the strongest tracks of the album are the deeper cuts. With its blasting, bass-heavy drum track, “Don’t Play It” could easily be hidden amidst a Death Grips album. Distorted, disorienting sonic elements surround Gordon’s voice, which repeats “Don’t Play It Back” until the DJ follows her directions. The following track, “Cookie Butter,” has a driving techno bassline that fits together with Gordon’s declarations, “You wish / I have / You saw / I approach / You fucked / You think / I won.”

The album’s final song, “Get Yr Life Back,” that name of which is taken from a sign Gordon saw in LA that was promoting a yoga class, provides an appropriately pessimistic endnote to an album. Gordon sings, “I feel bad for you / I feel bad for me.”

Unconcerned with beauty or reverence, Gordon defies expectations and tackles the strange, endless complexities of life in modern America with a dreamy twist.

In an interview with Vanity Fair, Gordon has said she intends to tour in 2020 but has not officially announced dates.