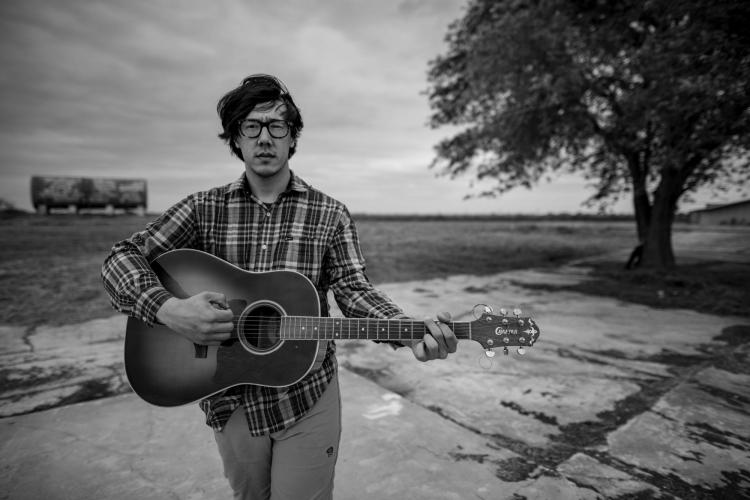 No-No Boy is a musical project created by Julian Saporiti, a Vietnamese-American musician currently studying at Brown University. Through acoustic songs and visual presentations, Saporiti tells his family’s history in Asia and America as well as the stories of survivors from America’s Japanese internment camps of the 1940s. The result is a potent interactive multimedia lesson in American history.

No-No Boy’s songs, which include elements of folk, rock and country, intentionally include quieter and subdued sounds in an effort to highlight Saporiti’s powerful, haunting lyrics.

“I connect more with little stories in history, rather than all of these big numbers,” Saporiti said. “I like to find those little moments.”

Emilia Halvorsen, a singer and collaborator of No-No Boy, opened the performance along with CU jazz students. Halvorsen gave a soulful rendition of the jazz standard “As Time Goes By,” while images of a 1940s-era Japanese band at the Amache Internment Camp flashed on the screens behind her.

Saporiti’s performance incorporated many intimate, personal moments. During “Instructions to All Persons of Japanese Ancestry,” a song about a child’s formative years spent in the camps, the screens behind Saporiti displayed archival footage of children playing in the grounds of San Francisco’s Presidio internment camp.

Many songs are based on research and interviews, but Saporori also writes fictionalized accounts to portray the daily lives and emotions of refugees. One of his diary-inspired pieces, “Heart Mountain,” proved to be the most powerful song of the night. At Wyoming’s Heart Mountain Relocation Camp, a fictionalized teenage couple sneak out at night to dance and hold each other in the moonlight. The romantic ballad showed that despite the restrictive, forced environments, refugees continued to find small joys.

“It’s about the importance to try and keep imagining when you’re put in a place like that,” Saporiti said.

Saporiti has recently extended the scope of his project to the present, focusing on the experience of current immigrants detained under ICE. This spring, he visited detention centers in Laredo, Texas, and was moved by the tragedies he saw around him. Drawing parallels to the Japanese experience in World War II, he reflected that his project shows the repeated echoes within American history.

“Until we own this as American history, we’re not going to have an American present,” Saporiti said, prompting loud applause from the audience.