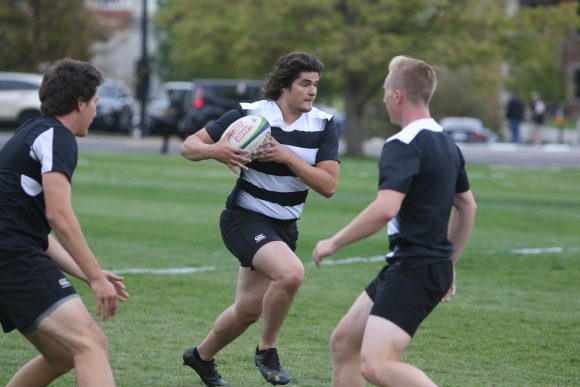 A player catches the ball during a drill at the beginning of practice at the Business Field on Oct. 9, 2019. (Kara Wagenknecht/CU Independent)

Following their qualification to the Collegiate Rugby Championship (CRC) tournament last spring, the University of Colorado men’s club rugby team is looking to prove themselves again this fall.

The club is fresh off a breakout performance last spring when they shocked everyone at the Las Vegas Invitational. They shut out all but one opponent in group play and upset the defending champion Kutztown Bears in the semifinal. CU fell to Dartmouth in the finals, but still qualified for the CRC tournament.

The team plays a physical, fast-paced sport of rugby that is similar to football. Two teams of either 15 players (in the fall semester) or seven players (in the spring semester) carry the ball downfield or kick it through a pair of uprights to score.

Unlike football, on a rugby pitch you can’t pass the ball forward but instead must kick it forward. When tackled, the ball-carrier must drop the ball and the two teams must wait until they have pushed the other team backward and kicked the ball behind their own players before retrieving it.

The CRC didn’t go quite as well as the Buffs hoped as they dropped all three matches of group play. Senior Jack Miller is on the recruitment chair and he attributed their losses to the big stage.

“Where we really saw our team fall apart was in the stadium,” Miller said. “That was really the main reason we stumbled in Vegas and then as a result in the CRC.” 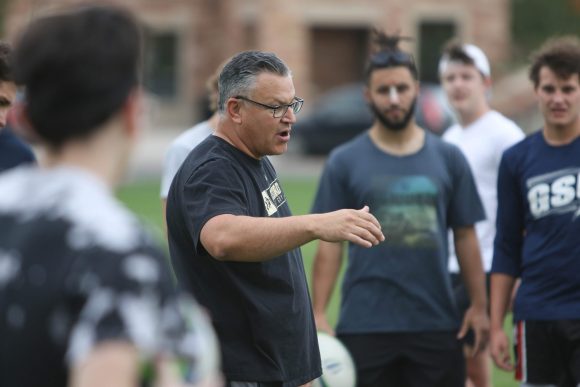 Assistant coach Rich Lair explains a drill to the team during practice on the Business Field on Oct. 9, 2019. (Kara Wagenknecht/CU Independent)

However, even reaching the tournament was a major success and one that was rewarding for the team. Assistant head coach Sean Kilfoyle said it was his favorite memory with CU rugby.

“Going to Vegas was pretty great,” Kilfoyle said. “We really went into it as huge underdogs … Just that experience of seeing those guys again band together as an entire team and not just as one strong group of individuals within the team was really rewarding to see.”

Of course, the team is looking to carry the success of last spring forward. Having pushed the needle in seven-player rugby last spring, the team will push harder playing 15s this fall.

“I’ve made it clear to everyone that we want to win,” senior president Konstantin Zagustin said. “We want to be attractive to players when they come. We want to be the best team in Colorado. We proved that in sevens, and to carry that on we have to prove it in 15s. We made a statement with Colorado State last year and we want to do it again. We want to do it with every team.”

Any competitive team has its rivals and CU rugby is no different. When asked about their rivals, Kilfoyle and Zagustin firmly agreed on Colorado State. Miller concurred, stating, “That rivalry is bitter.” CU’s next match against CSU will be Nov. 1.

When Kilfoyle joined the team last year with head coach Chris Hanson, he wanted to change the team culture.  He began by focusing on the mental aspect of the game.

“What I tried to bring to the program was more of a cultural buy-in,” Kilfoyle said. “… Incorporating things like group meditation and guided meditation, which I think really helped with that mental part of the game. (It) showed within our success when we went to CRCs and when we went to Vegas.” 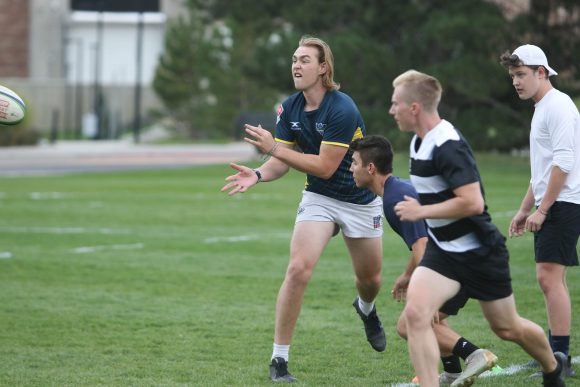 A player from the rugby team passes the ball to a teammate during practice at the Business Field on Oct. 9, 2019. (Kara Wagenknecht/CU Independent)

Mediations and breathing techniques help to unify and focus the team. Miller has found solace in these exercises and believes it helps the team focus on what’s ahead of them.

“We did a breathing session the night before our first match, as well as some personal affirmations,” Miller said. “That night we got the opportunity to sit in a room and turn the lights off and just breathe and think about breathing and be in that moment of calm and I think after that it kind of settled the nerves a little bit.”

The team spends a lot of time together, leading to a close-knit brotherhood.

“We’re all brothers and we have small little things that just bond us,” Konstantin said. “We have chants (and) get togethers as the season progresses … We’re gonna be there for each other.”

CU’s first home game of the season will be Oct. 12 at the lower football practice field at 1 p.m. MST.

If you’re interested in joining rugby, you can email the team and their schedule can be found here.