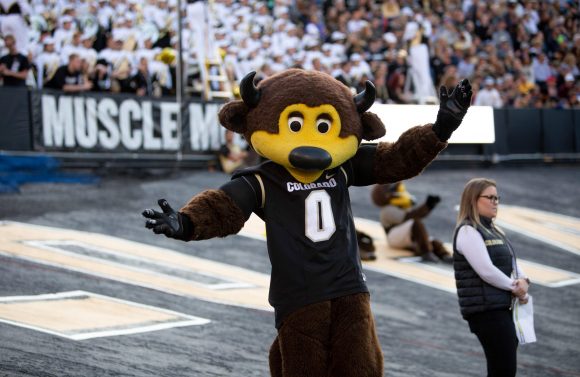 Chip the Buffalo poses for a photo from the end zone during CU’s game against Arizona. Oct. 5, 2019 (Kevin Wu / CU Independent)

An injury-depleted (3-2) Colorado Buffaloes roll into Eugene for a week seven matchup against the mighty (4-1) Oregon Ducks. Can the Buffs pull off another road upset? Our sports writers preview Colorado’s Friday night lights matchup:

The Buffs are in a rough spot following their disappointing loss to Arizona last weekend. They have a short week to prepare for a road game versus an Oregon team that is considered by many to be the top of the Pac-12. Colorado’s defense has been a concern all season and now they’re facing their toughest test yet against a Ducks offense that is averaging 38.5 points per game.

Offensively, the injury bug has bit CU hard the past four weeks, specifically with the receiving corps as Laviska Shenault Jr. and K.D. Nixon are both likely to be game-time decisions. Despite the loss, having the ability to move the ball without two of their key playmakers allowed the Buffs to hang in with Arizona for as long as they did. There’s no doubt that Oregon has a good defense, but senior Steven Montez is arguably the best quarterback they’ve faced all season. Montez isn’t exactly the definition of consistency, but if he plays the way we know he’s capable of, he can frustrate the Ducks as he did in 2016.

As they have all season, I think the Buffs will play a fun and competitive game but ultimately struggle to get enough stops by the end.

Oregon is coming off two straight impressive defensive performances heading into Friday night’s matchup. The Ducks can win with their defense, a large departure from Oregon teams of the past. For Colorado, they’ll likely be without junior defensive lineman Mustafa Johnson, who missed last week’s game against Arizona. This is a big blow defensively for the Buffs, who have struggled to put pressure on dynamic quarterbacks of late. With junior wide receiver Laviska Shenault Jr. hurt as well, this game may come down to quarterback play and field position.

Although I don’t trust Colorado’s banged-up defense to stop the Ducks, the last time redshirt senior quarterback Steven Montez went on the road he threw for over 300 yards and three touchdowns against Arizona State. Senior wide receiver Tony Brown will have to be the Buffs go-to offensive playmaker in order for Colorado to pull off another road upset. Fortunately for Colorado, their victory over Arizona State should give them some confidence to be successful against quality teams on the road. Defensively, Colorado should be able to keep pace with Oregon as long as they can limit the big play.

Outside of Pac-12 play Oregon has flexed its offensive muscle, which should concern Colorado after a disappointing performance against last week. The Buffs’ secondary will be tested on Friday, they’ll have to keep the game close for the offense to have a chance matching the Ducks score for score. Oregon may pull out a tight victory by a field goal.

On the current Buffs roster, eight players remain from the 2016 Pac-12 South champion team that beat Oregon 41-38 in Eugene. You may remember Sefo Liufau as the team’s quarterback, but on that memorable day, it was then-freshman quarterback Montez who defeated the Ducks. Montez and the 2019 Buffs will need to find that same magic to pull off another upset.

For CU, consistency has been their biggest challenge. On the offensive side of the ball, they seem to have found their stride. Montez has thrown for a combined 636 yards with four touchdowns and no interceptions the past two games, even without star junior receiver Laviska Shenault Jr. Injuries will hinder the Buffs, but Montez has demonstrated confidence in all his receivers. Sophomore tight end Brady Russell and senior wide receiver Tony Brown have stepped up in Shenault’s absence and will continue against Oregon.

Oregon, on the other hand, is riding a four-game win streak, holding their opponent to single-digit points in each win. Senior quarterback Justin Herbert boasts a 71.6 completion percentage and will target a depleted Buffs’ secondary led by graduate safety Mikial Onu and his four interceptions. If senior cornerback Delrick Abrams Jr. and junior safety Derrio Rakestraw erupt in a big way, the Buffs may have a chance against the Ducks.

For me, there are too many “ifs” and injuries to be confident in CU. I’ll take Oregon in a two-score game.

I think it’s mostly a question of which team executes the best on game day. Both Oregon and Boulder have proven they have the ability to score points when needed. While the injury reports and statistics point to a CU loss, I’m not so sure. I am going to disagree with my fellow writers here, I think that if Colorado can execute their playbook as planned then they have a chance of winning. Colorado proved it’s resiliency a few weeks ago when they defeated the ranked Arizona State in Tempe after losing the previous week at home to Air Force. All I am saying is that if the Buffs did it once, they can do it again.

However. I don’t think Colorado’s defense is going to be much of a match for the Oregon offense, especially with the range of injuries plaguing the Buffs. So, to put it simply, the way to victory for CU is to score a lot of points. Even though Oregon is averaging over 30 points a game this the season, it should be noted that the Ducks are yet to break 30 points in a game in Pac-12 play. After Colorado’s loss against Air Force, a fire lit under the Buffs that pushed them to a stellar performance against ASU. My prediction is that a similar fire has been lit under the CU players and coaches after last week’s affair and the Buffaloes will stampede in and out of Eugene with a win.