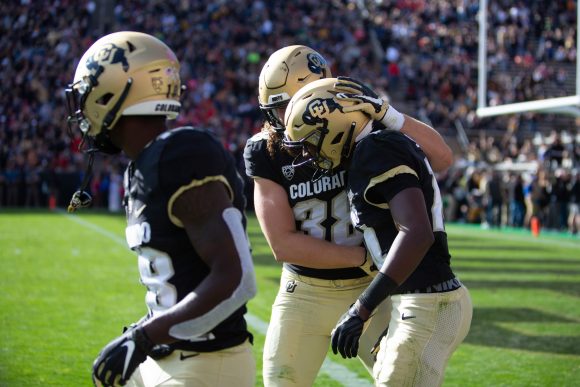 Wide receiver Dimitri Stanley celebrates his touchdown grab with his teammates during the game against the University of Arizona at Folsom Field. Oct. 5, 2019 (Kevin Wu / CU Independent)

On Family Weekend in Boulder, the University of Colorado Buffaloes welcomed the Arizona Wildcats into Folsom Field to decide first place in the Pac-12 South. Colorado fought until the last whistle, but Arizona came away with the victory, 35-30.

“We have a very disappointed locker room,” said CU head coach Mel Tucker. “We have to give Arizona a lot of credit. They made more plays than we made. They executed more often than we did. When you play a good football team you can’t afford to leave plays on the field. That is what happened today.”

Since 1992 the Buffaloes have been 19-8 in Family Weekend games, which are often some of the highest attended games of the season. Today’s game was no different as Folsom Field sold out to the tune of 52,569 fans. 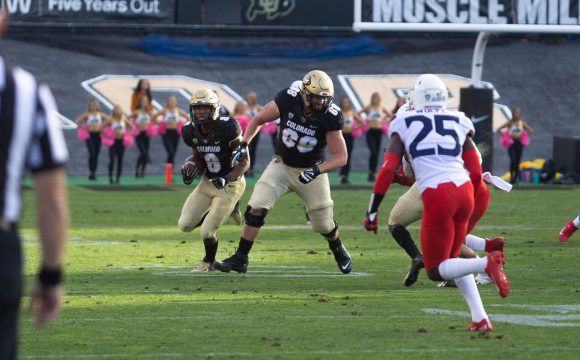 Tailback Alex Fontenot weaves in behind offensive lineman Jack Shutack for a first down during the game against the University of Arizona at Folsom Field. Oct. 5, 2019 (Kevin Wu / CU Independent)

The Buffs received the ball first and got out to a quick first drive, moving the chains with short passes to wide receiver Tony Brown and carries up the gut for running back Alex Fontenot. Arizona’s defense eventually wised up to Colorado’s short style of play and forced the Buffs to settle for a 37-yard field goal from James Stefanou, 3-0 Buffs.

Two of Arizona’s star players, QB Khalil Tate and RB J.J. Taylor, suited up for the Wildcats after missing last week’s game against UCLA. Tate would go on to throw for 404 yards and three touchdowns despite having a slow start on the Wildcat’s first drive.

“As for Khalil (Tate),” said Colorado linebacker Nate Landman. “You know, he’s a gifted athlete, great quarterback and he took advantage of what we’re in. They just made more plays than us at the end of the day and credit to him, that offense and their coach.”

Colorado struggled with penalties early, allowing four in the first quarter. Two of those penalties came on back-to-back plays on offense during the Buffs’ second drive, forcing Colorado deep back into their own zone to punt.

Just before the end of the first quarter, Arizona scored its first touchdown of the game. Following a 49-yard pass to Tayvian Cunningham that brought the Cats deep into Colorado’s red zone, Tate found a hole in the Buffs’ defense and delivered a pass to Stanley Berryhill III for a seven-yard touchdown. The score sat at 7-3 in favor of Arizona to start the second quarter.

“Up-tempo, slow tempo, whatever works,” Tate said. “However, we think we can manipulate the defense and move the (football) that’s what we are going to do. In the second half, we felt that temp was going to work.” 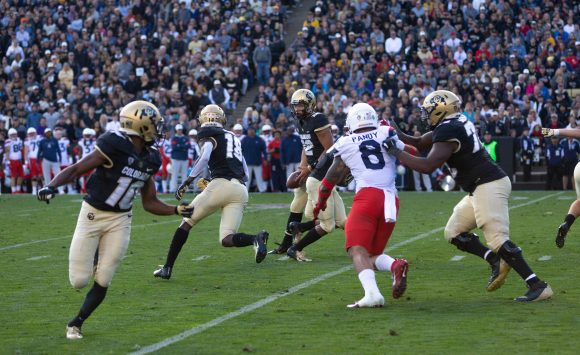 Quarterback Steven Montez hands the ball off to Tony Brown who runs it in for a touchdown. Oct. 5, 2019 (Kevin Wu / CU Independent)

In the second quarter, both teams seemed to settle down on defense. Neither CU quarterback Steven Montez nor Tate managed to lead their team to a meaningful drive until the last two minutes of the half.

“I think early we just made some mental mistakes,” Montez said. “We had some (mistakes) which kind of stalled a few drives. I mean, just easy mistakes to clean up and fix. We’ll see them on film and we’ll get them corrected.”

Following a series of defensive stops for both teams, Colorado managed to keep Arizona pinned deep which resulted in a shallow punt and great field positioning for CU. Montez and the Buffs began from midfield and after two successful first downs, stalled out and once again settled for a 39-yard field goal from Stefanou to make the score 7-6 in favor of Arizona.

On Arizona’s ensuing position, the game got its first turnover. Safety Mikial Onu for Colorado continued his defensive hot streak with his fourth interception of the season. The Buffs made sure to not let his efforts go to waste as they scored on the next play of the contest with a trick play.

Montez took the snap and handed the rock off to Jaren Mangham who immediately pitched the ball to receiver K.D. Nixon, who was running by in the other direction. Nixon, on the run, delivered a 38-yard pass to the waiting Dimitri Stanley for a touchdown. The one play drive confused Arizona’s defense sufficiently and only took nine seconds and made the score 13-7 in favor of the Buffaloes.

“I’ve got complete faith in K.D.’s arm,” Stanley said. “I don’t know how far he can throw it, but he put that ball on the money, spiral and everything.”

The Buffs fans in attendance couldn’t cheer for long as Arizona’s first play of their next drive went for a 75-yard touchdown to Cedric Peterson to make the score 14-13. This sequence mirrored the Nebraska game at Folsom field a few weeks ago when after CU scored on a trick play flea-flicker, Nebraska’s next play was a 75-yard touchdown pass.

The Buffaloes managed to get the ball back one more time at the end of the first half and Montez seized the opportunity. Montez led Colorado down the field with a mix of QB scrambles and quick passes to Brown and Stanley that put CU in the red zone with just under 30 seconds left in the half.

“Anytime we go out there, and we have an opportunity to put points on the board, that’s what we want to do,” Montez said. “That’s our goal for that drive.”

As time ticked under five seconds, Montez escaped a tackle and let the ball loose to the side of the endzone where TE Brady Russell reeled it in for his first touchdown of the season and his first career touchdown with the Buffs. The drive resembled a true two-minute drill as the Buffs went 75 yards on nine plays in just over a minute and a half. The Buffaloes entered the locker room at the end of the half on a high note, leading 20-14.

“I scrambled around a little bit, I knew all needed to do is not take a sack,” Montez said. “So I avoided a couple of defensive linemen, saw Brady (Russell) sitting in the corner with his hands up and I just tried to give him a quality throw.”

Again, Colorado’s lead didn’t hold for long as Arizona came out of the locker room, marched down the field and scored a touchdown to make the score 21-20. The Wildcats’ drive, characterized by quick and short passes to the sideline, seemingly puzzled the Colorado defense as they couldn’t hold them in the slightest. Arizona ended up driving 65 yards with six plays in just 1:49. 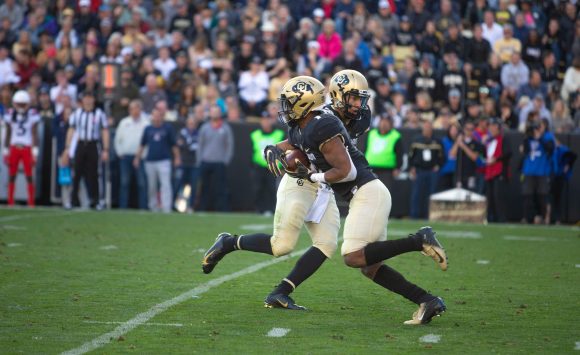 Quarterback Steven Montez hands the ball off to tailback Jaren Mangham during the game against the University of Arizona at Folsom Field. Oct. 5, 2019 (Kevin Wu / CU Independent)

“We weren’t getting the 5-6 yards runs that we are used to getting,” said Arizona head coach Kevin Sumlin. “We were only getting 2-3. So we threw it a lot more in the second half and got the ball on the perimeter.”

Midway through the third quarter, Montez fired a 49-yard bomb to Brown who reeled it in right on the sideline and gave CU a quick red zone opportunity from the Arizona 15-yard line. Colorado again took advantage of quality field positioning and punched in a touchdown to regain the lead, 27-21. The scoring play was a reverse handoff to Brown who, after using some fancy footwork to make several defenders miss, took it to the house for a 15-yard score.

“It’s pretty fun,” Brown said. “I wasn’t really expecting a rushing touchdown, but I’ll do what I can to contribute, do what I can to help the team out until I had to make a big play and that’s what I did.”

Arizona came back on the field for their next possession and quickly made it clear that they weren’t done yet. The Wildcats, in just a minute and a half, took the ball down the field and scored a touchdown on a run by Nathan Tilford to make the score 28-27 with Arizona back in the lead.

“Hard work,” Tilford said. “We work at practice all week. Grinding nonstop, nonstop no matter what.”

The following drive for CU had been going well until yet another penalty stopped them. However, CU managed to overcome the penalty and score a field goal to make it 30-28.

On Arizona’s next possession, similar to the drive that began the second half for the Wildcats, Arizona marched downfield and Tilford earned his second five-yard touchdown run of the day to make the score 35-30. Colorado got the ball back one last time but turned it over attempting a fourth-down conversion near midfield.

“I mean, we were matching plays a little bit,” Montez said. “I was confident that we’re going to make something happen all the way until the clock hit triple zeros.”

At the end of the day, the Buffs gave too little too late. People can point fingers to any number of mistakes made in this game, but one glaring difference was in the penalty numbers. When all was said and done, Colorado committed eight penalties for 85 yards compared to Arizona who only had one penalty for five yards. Several times in this matchup CU’s drive came to a screeching halt after a penalty.

“Penalties,” Tucker said. “Those are self-inflicted type of deals. Maybe it was some of what they were doing, but in our minds, it is more executions, technique and fundamentals. When you are behind the sticks like that, those are drive killers. We all know that.”

Looking ahead, Colorado will travel to play the University of Oregon in Eugene on Friday, Oct. 11 at 8 p.m. MST. 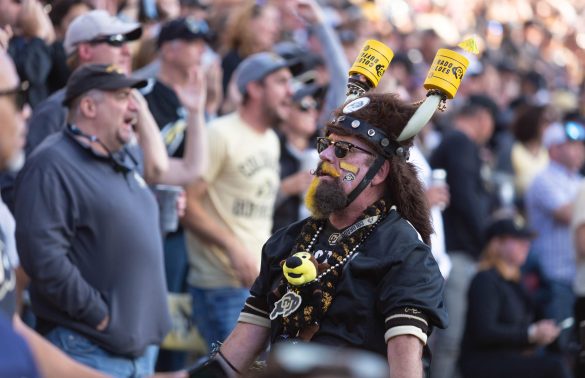 A fan attempts to pump up the crowd during a crucial third down for the Univerisity of Arizona offense. Oct. 5, 2019 (Kevin Wu / CU Independent) 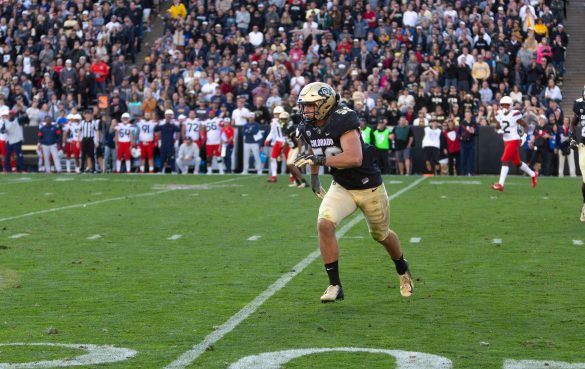 Inside linebacker Nate Landman rushes to make the tackle during the game against the University of Arizona at Folsom Field. Oct. 5, 2019 (Kevin Wu / CU Independent) 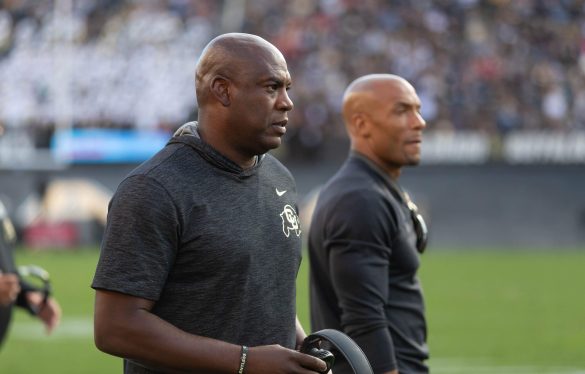 Head coach Mel Tucker watches the action from the sideline during the game against the University of Arizona at Folsom Field. Oct. 5, 2019 (Kevin Wu / CU Independent) 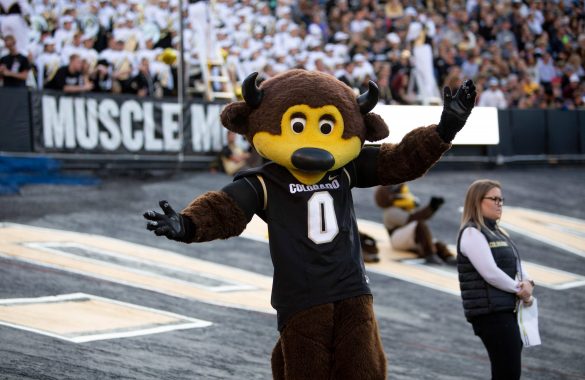 Chip the Buffalo poses for a photo during game against Arizona from the end zone. Oct. 5, 2019 (Kevin Wu / CU Independent) 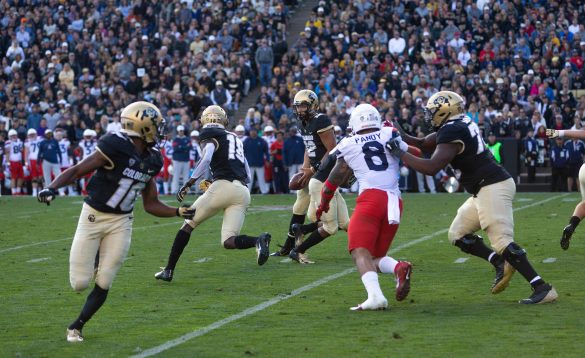 Quarterback Steven Montez hands the ball off to Tony Brown who runs it in for a touchdown. Oct. 5, 2019 (Kevin Wu / CU Independent) 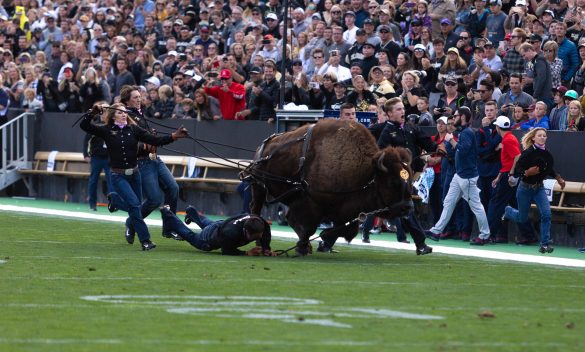 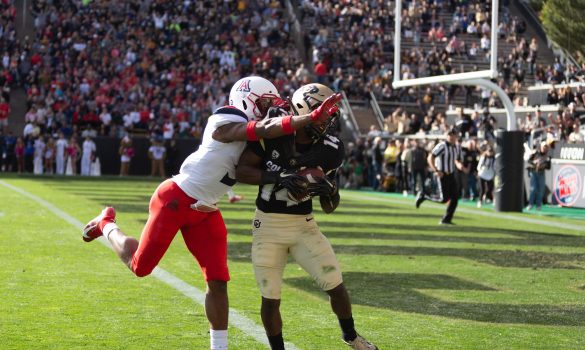 Wide receiver Dimitri Stanley catches a pass for a touchdown from wide receiver KD Nixon during the game against the University of Arizona at Folsom Field. Oct. 5, 2019 (Kevin Wu / CU Independent) 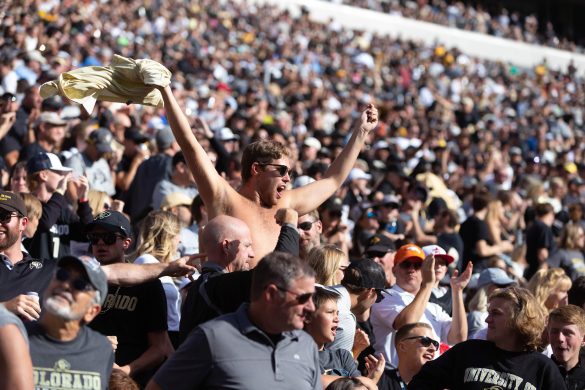 A fan celebrates during the game against the University of Arizona at Folsom Field. Oct. 5, 2019 (Kevin Wu / CU Independent) 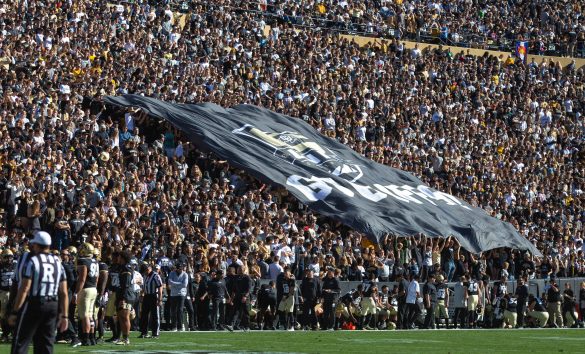 Students in the stands show their support for the team during the game against Arizona. Oct. 5, 2019 (Kevin Wu / CU Independent)