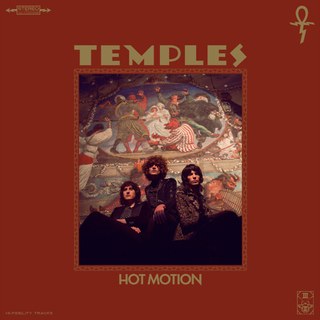 In an era dominated by electronic arrangements and chart-topping hip-hop, hearing authentic psychedelic rock is refreshing. On their third album, “Hot Motion,” rock-band Temples once again revives the experimental, hypnotic sounds of the 1960s. The nostalgia-fueled album makes for a pleasant listen but lacks the differential lyricism and sonic ability for a repeat trip.

The English trio is known for their repurposed hazy sounds reminiscent of The Byrds and Jefferson Airplane. They have created songs with a jangly, retro vibe and ambiguous lyrics alluding to spirituality. As Temples frontman James Bagshaw stated, “psychedelic music has always been forward-thinking. It’s so easy to fall into that kind of revival band thing, but our aim is to reference these things and bring something completely new to it.”

However, despite their early work referencing classic rock bands, Temples’ knack for recreating 1960’s sounds gets a bit tiresome with their most recent album feeling like a Frankenstein mash of sounds that have already been done before.

That isn’t to say that “Hot Motion” is an album devoid of quality. Bagshaw’s echoey, layered vocals blend into the background on each song and create an interesting harmony alongside electric guitar leads. At times, it’s difficult to hear the lyrics and it’s clear that they aren’t the main focus. On songs like “Context,” instruments blend nicely together and vocals are intentionally pushed to the background.

The album is at its best when creating dreamy, laid-back soundscapes that harmonize the vocals with gentle guitar riffs. This is seen especially on tracks like on “You’re Either On Something.” Temples excels in their slow tempo songs, likening themselves to the atmospheric sounds of Sgt. Pepper’s era Beatles.

Temples have a history of producing hard-hitting odes to the Big Muff fuzz pedal groups of the 1960s. Unfortunately, “Hot Motion” suffers in its high-energy moments, where loud drums and sharper guitar tones attempt to go for a stadium-rock feel, delving into the sounds of other modern rock bands such as The Black Keys. In “The Howl,” Temples tries to go for a more glam rock angle with a foot-stomping anthem, but it falls flat due to its overly repetitive hook.

“Hot Motion” favors the vague aesthetics of psychedelic and experimental rock over complex lyricism. However, this third album shows that the band needs to carve out their own space in the rock genre that doesn’t rely too hard on the sound of their influences and contemporaries.

Temples will perform at Englewood’s Gothic Theater on Oct. 18. Information and ticket prices for their upcoming show can be found here.

Ben Berman is a freshman at the University of Colorado from San Francisco, CA. He is pursuing a career in media production, with an interest in the film and music industry. When not writing, he can be found at a concert or on a hike. His Twitter can be followed @benfromsf.