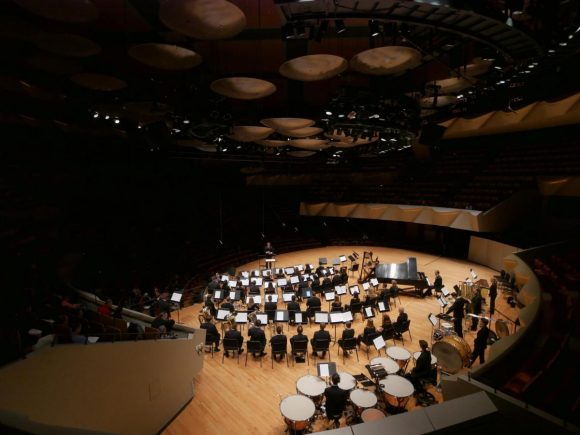 The Wind Symphony of CU Boulder’s College of Music (Photo via colorado.edu)

This Thursday the Wind Symphony and the Symphonic Band of the University of Boulder’s College of Music will be hosting a free concert at Macky Auditorium at 7:30 p.m.

The Symphonic Band, led by Associate Director of Bands Dr. Matthew Dockendorf, will perform four songs. The repertoire will consist of Edward Gregson’s exuberant rondo “Festivo;” Roshanne Etezady’s choral-inspired “Against the Rain;” Martin Ellerby’s “Paris Sketches,” with its overarching theme of bells, and John Zdechlik’s dynamic “Celebrations,” which commemorates the 20th anniversary of the Medalist Concert Band of Bloomington, Minnesota.

The Wind Symphony will be conducted by Dr. Donald J. McKinney, director of bands. Wind Symphony will perform Roberto Sierra’s lively “Fandangos;” Collin Kemeny’s “Introduction” and “Dance Macabre,” which move from grandiose splendor to warped melodies, and Joel Puckett’s profound composition “That Secret From The River.”

More information can be found here.

I am a writer - primarily interested in creative fiction, but willing and wanting to expand horizons to other scopes of writing. I am also a pianist, with 14 years' experience - during which I composed 4 songs, represented my country (Malaysia) in a concert with my first composition, joined several music competitions, as well as accompanied and led my highschool's choir group.