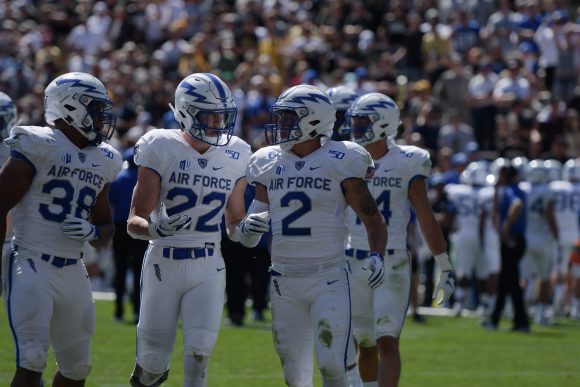 During the third quarter of Saturday’s loss against the Air Force Academy Falcons, the University of Colorado football team stood in silence.

An Air Force run down the west sideline prompted Colorado junior safety Aaron Maddox to dive for the tackle, sending him barreling into a metal cooling fan on the Falcon sideline. The play left Maddox in considerable pain and forced him to leave the field on a cart. Maddox was taken to a nearby hospital and is expected to miss at least four to five weeks with a lower leg laceration.

It was a tough moment for senior cornerback Delrick Abrams Jr., who plays beside Maddox in the Buffs’ secondary.

“It really hurt me seeing one of my brothers on the ground in that much pain,” Abrams said. “After that, I just pray for him and pray he recovers. He hit something on the sideline and it hit really hard.”

Before the injury, Maddox was having the game of his career. He had eight tackles, one fewer than his career-high nine against Nebraska last week, and forced an Air Force fumble in the first quarter. The junior college transfer has been a bright spot on the Buff defense and has emerged as a leader.

As he left the field on the cart, Maddox raised a thumbs up to the crowd of nearly 50,000 at Folsom Field. The gesture was an encouraging sign that inspired the Buffs, who were down 20-10 at the time. Junior inside linebacker Nate Landman took the opportunity to play harder for his fallen teammate.

“It kind of sparks our defense to play harder,” Landman said. “We don’t like seeing our guy go off in a stretcher or on the cart, and I think that kind of just put another spark into the defense to … play for him.”

The extra motivation propelled the Buffs in the fourth quarter. CU rallied for 13 points and sent the game into overtime after a 23 tie. Unfortunately for Colorado, the rally was cut short and Air Force came away with a 30-23 win in overtime. Graduate safety Mikial Onu was disappointed the team couldn’t secure the victory for Maddox.

Senior quarterback Steven Montez also had high praise for Maddox and his physical style of play.

“He’s a key part on our defense,” Montez said. “He’s a hitter, he’ll come down he’ll hit you and … coach Tucker likes that on defense, so he’s a big piece. Hopefully, his injury is not too bad and he’ll be back soon.”

“We want to definitely play for him, get the win for him and I just feel terrible we couldn’t do that.”

Moving forward, the Buffs are optimistic they have the depth to make up for their loss of a player. Junior inside linebacker Akil Jones preaches a “next man up” mentality.

“I feel like our secondary second string and everybody are always right there to be the next man up,” Jones said. “I feel like we actually don’t lose a step or a footing or anything. I feel like (we) actually continue to keep moving. They mix us up every day at practice so we’re pretty used to it.”

That next man up happened to be junior safety Derrion Rakestraw, who totaled two tackles in the final quarter of the game. Head coach Mel Tucker will have some shuffling with the secondary, but expect Rakestraw to see increased playing time with the void.

Injuries are going to happen throughout a season and while junior wide receiver Laviska Shenault Jr. feels the loss, he said the team must keep working.

Colorado will now enter the ever-important Pac-12 portion of their schedule. They take on Arizona State next week in Tempe and look to bounce back after a tough loss.

At the end of the day, a good football team overcomes challenges. Air Force did so on Saturday and the Buffaloes have a challenge on their plate with the loss of a leader.